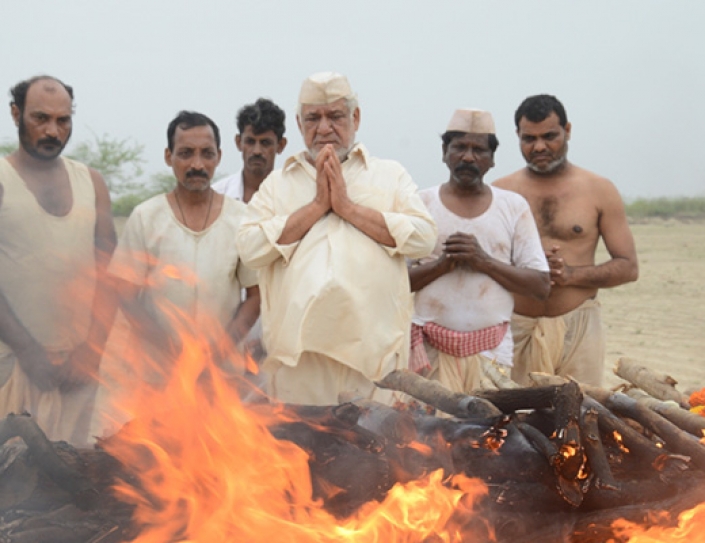 Mumbai, September 22, 2015: The uproar can be heard, the emotions are lucid and the pain of the besieged Indian farmers can now be sensed, with the rising awareness in India. Celebrities from all walks of life have come forward with a helpful hand, lending support to the ill-fated citizens of India and bring an end to the incessant suicide by the farmers.
To garner the Government’s attention and highlight their plight, debut Producer-Director Team of Prakash Patel and Bhavin Wadia have joined hands with the established actor, Om Puri, for the making of the film, ‘Project Marathwada’ which is rooted in on the sensitive issue faced by the nation today. The duo launched the first look of the film which has not just captured the painful sentiments of the poverty struck families but has also shown the extent to which these people are forced to budge.
The first look of the film, ‘Project Marathwada’ begins with Om Puri’s son committing suicide which is followed by the heart wrenching words spoken by him in the background while conducting his last rituals. The film showcases the grief stricken family and the villagers who remain speechless and unsurprised yet are filled with void in this hapless situation. Each moment highlights the grave loss and the helplessness of the people who are merely living a life with zero hopes. The twist in the story develops after Om Puri himself decides to end his life but fails miserably in his attempt as the fan in his house he hung to, gave way. In the next scene, he can be seen in Mumbai, tirelessly paving way to the Mantralaya with the hopes of getting some help from the system. The teaser ends with Om Puri pouring kerosene on himself while flashing images of the corrupt government officials, the corporate babus as well as the local citizens having a somber discussion amongst them.
Acclaimed actor and lead in the venture, Om Puri’s look of an old, distressed farmer, named Tukaram, is really moving and his expressions can absolutely melt one’s heart. The film is focused on the national yet neglected problem of insolvent farmers especially in the Vidarbha belt of Maharashtra region and have been shot in the rural parts of this state.
Highlighting this solemn issue, the protagonist of the film and the multifaceted artist, Om Puri comments, “It’s moving at how we have abandoned our farmers and yet they have continued to feed us. While playing the character of Tukaram, I have felt a part of their lives and it is really disturbing to see their miserable state. We hope to create a strong wind and arouse a sense of responsibility in every Indian to reach out the fateful farmers.”
Farmer’s suicide which has been a raging concern since 1995 has claimed lives of nearly 300,000 farmers since then. The film maker stated that such an alarming statistic baffled and compelled him to voice this issue of the farmers which thus gave way to the film titled, ‘Project Marathwada.’ With supporting actors like Govind Namdeo, Dilip Tahil, Kunal Seth, Seema Biswas, Rahul Patel, Farrah Kader and Katerina, the team strongly believes that leveraging this issue on such a big platform will stir the Indian.

With a debut directorial venture, Bhavin Wadia, who has worked in theatre and directed several short films, speaks at the press conference, “This project is very close to my heart as I belong to an agricultural family. I have seen the ups and downs of my people and want create awareness and wake up the dormant government to help the entire community of farmers. In India, film is the best medium to reach to the larger audience for bringing forth the crisis of the farmers. I am thankful to Om Sir who has shown faith in us and this venture of ‘Project Marathwada’. He is a brilliant actor and has effortlessly portrayed the role of the feeble.
The second schedule of the film has commenced in Rann of Kutch and will then move to Marathwada.

The first look can be viewed at – https://www.youtube.com/watch?v=yH_YTdzlf1