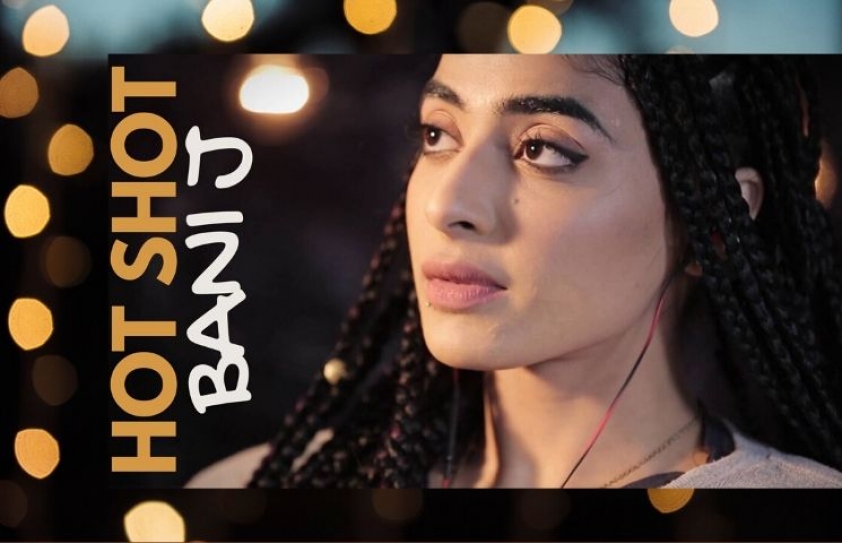 Khalid Mohamed quizzes Bani J, the young woman on the go who’s made a wow impact as a bisexual woman in love in Season 2 of the  web series Four More Shots Please!

Okay she’s Bani J, or VJ Bani, or Gurbani Judge. What’s in a name or a twisty acronym? It’s her life, she owns it.

And so I’m a mite trembly to interview her, and that too over the ‘phone in these talk-the-talk from afar times’.

Reason for the talk: No secret about that. Because of her performance as Umang, a freewheeling spirit in the Amazon Prime Video web series Four More Shots Please! – the second season especially – is quite a bravura, no-inhibitions-barred act. Unconditionally impressive. The tattoos on her body are real, and so is her devout Instagram following of 1.4 million.

Bani, so let’s just call her that, essays the role of a bisexual physical trainer who falls in love with Samara Kapoor a movie diva on the skids, played by the gorgeous Lisa Ray.

In fact, this angle of a sometimes-tender, sometimes complex relationship between the two women, is quite the unpredictably-scripted, wow factor of the Season 2. 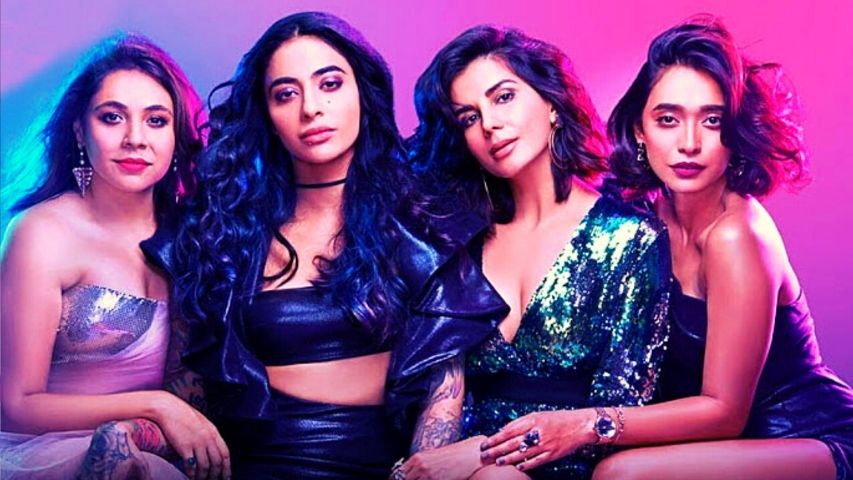 Apni Bani is a fanatical  trainer in real life too. When I call her, a little before the appointed hour fixed by the series’ producer Rangita Nandy, the cell just rrrings on. Uh huh, attitude throw kar rahi hai, kya, I groan, stupidly as it turns out. At the dot of the scheduled minute, she calls back, apologises, “Sorrysorrrysorry, I was in deep meditation. Just got back to earth.”

Meanwhile her pet dog, Patch, barks on, she shushes him and tells me, in an extra-strong peppermint voice, “Let’s go.” So we do, sort of. For starters I stutter th..th…at I will throw just one word at her and she can respond in any which way she wants. A p..ppause ensues and then the word:

Not him. Why him? That’s a dangerous game, maaan. What’ll I end up saying?  I hardly knew him. My parents divorced when I was one year old. I’m thinking of other things. You know it’s like this, during the lockdown, I’ve kept myself secluded, I’ve been training with my weights and lots of cool equipment at my house in a Yaari Road colony.

When I went down to the compound the other day, a couple of boys wanted to try the weights, I said, go right ahead. And there was this sweet girl, 18-ish, who’s scheduled to go abroad to study. She opened up a bit to me about her anxieties but that’s it. The point is I don’t disclose too much about myself to anyone. How can I summarise my life, my parents, in a few conversations or in this interview? In any case, ever since I was 18 or 19 in Chandigarh, I’ve been an open book. Turn to any page and read what you like.

She passed away while I was in the midst of shooting for Season 1 of Four More Shots Please! I didn’t want anyone to know, not even my co-actors. I was going through 80,000 different emotions then. Receiving messages of condolences wouldn’t have helped. I just switched off. I thought of mum and how it was her constant dream to get my sister Tanya and I out of Chandigarh for sure some day. And hello, you still want to play a word game? It’s not working.

I feel restricted by words, and you’re just giving me a single word. I can get restless. You know something? I can never stay still in any place for a month dude, I have this urge to get out of the country like I was in the U.K. in December last year. Taking off to train abroad, anywhere, is like a pilgrimage. I look for peace, go deeper while learning new stuff like mastering hand-standing which can be very difficult.

Once I even found myself in a small suburban town of California, where I met these fuckass aeralists. It’s not important  to build myself the greatest abs ever, it’s important for me to invest in myself, in my body and soul, physically, mentally, emotionally, the works. If I earn in lakhs and maybe crores some day, I have the right to spend it on myself, don’t I? I have to be able to kick the slightest sign of depression out of myself, be happy, radiate a positive outlook, survive! Makes sense to you? 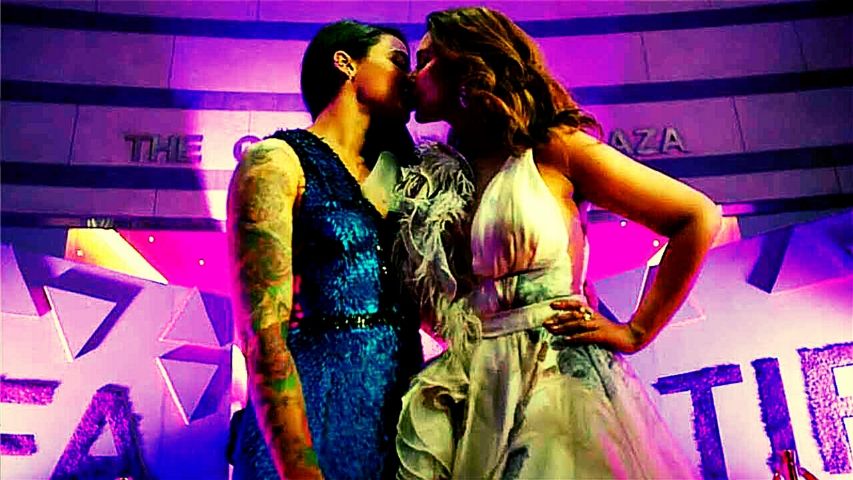 Yes, yes, but I think I should give up the single word approach now.

Up to you. I’m okay with anything. You know how it’s with the person who’s being interviewed – the feeling is oh what corny questions! And the interviewer feels why is this person being so high and mighty, does she think she’s a mega- star or what? Get it!

Got it. Tell me, how did you land up in the Bollywood film Aap kaa Surroor, the Himesh Reshammiya starrer?

I didn’t want to be in the media industry at all. I longed to be an artist, painting, doing sculpture, using my hands and having the time of my life. I was 19 when Aap Kaa Surroor happened. Being from the Woodstock International School (in Musoorie, Uttarakand), there was no big thing about Hindi films. Hardly anyone would see them even on TV. I certainly didn’t see the movies as a stepping stone to an acting career: naachna aur gaana weren’t amongst my aspirations.

Before that I was a presenter for MTV India, and subsequently a participant in the reality show MTV Roadies, Fear Factor: Khatron ke Khiladi, Big Boss (Season 10) etc and more etc. I came to be known as the ‘Golden Child’ of the reality shows, like I wasn’t the winner of Roadies but people believe I should have been.

As for Big Boss, that was a highly unnecessary experience. I haven’t bothered to see a single episode featuring me. I do like to be seen and heard, express my thoughts but from what the viewers saw, they couldn’t understand an iota of me. It was also so very mental that after I came out of the show, I had to take a year off, or else I would have lost my sanity. 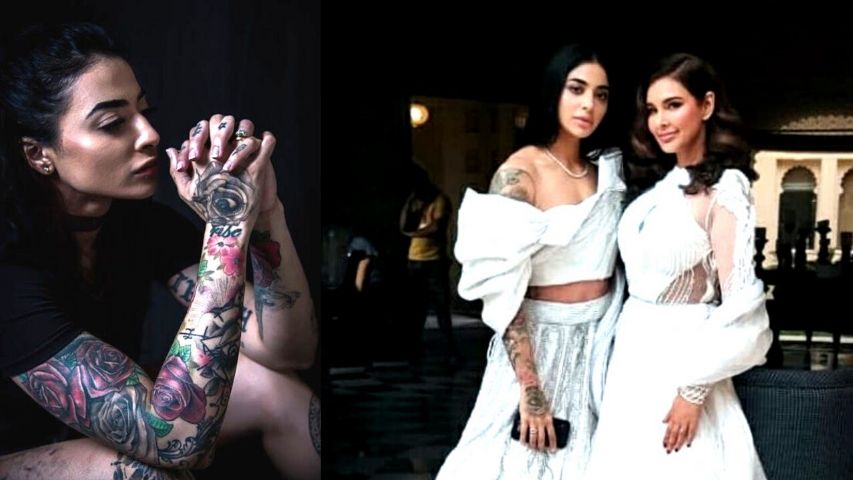 It’s a pioneering show, a movement, the Second Season was so much better. Right when the first season kicked off, I’d got a call and met Rangita and Ishita Nandy at a Bandra café. When they told me I would be playing a bisexual, I arched my eyebrow – not to show my surprise, but to say how cool, I could see their vision right away. I think I was the first one to be cast,  I was all for it, I embraced the series without a second thought. Mum who was away in Dharamsala – she had become a Buddhist and taught there –  said she had a good feeling about it, and to do it absolutely, no questions asked.

Bold! Bold! Bold! It’s funny why people don’t call a relationship involving a heterosexual couple bold at all. Believe me, same-gender relationships are as normal, they carry as much love, heartbreak and passion as heterosexuality does. I didn’t use any point of reference for Umang, all I said to myself, you’re from the LGBQTI community in this series, so don’t hold back, just don’t copy-paste trite and cliched emotions.

It was exhausting to do Umang, not because of the content, but for the 12-hour-long shifts. Plus I had to disengage from the elements of bipolarity inherent in the character of Samara, my girlfriend. My hair had grown so long, it was like a burden on my head, so I cut it off immediately after the shoot and have dyed it in a light blue.

How did  you win Lisa Ray’s trust as a co-star?

Omigawd I was over-the-moon to find Lisa Ray playing Samara… you know the Aafreen Aaafreen girl, I’d also seen her in Water and the lesbian themed film I Can’t Think Straight. Initially, Lisa would be in and out of the shoot, she was carrying her twins and had to make some personal decisions about her career. I wouldn’t meet her much. At the workshops and script readings I’d keep a distance. When the shoot started, I tried to give the best shots I could summon up. Then Lisa and I hung out at cafes and at her beautiful home, both of us had to make sure there was a connection, a trust between co-actors.

With the other actors (Kirti Kulhari, Sayani Gupta, Maanvi Gagroo), too, there was a bond, no catfights, we had to be collaborative since there was a long road ahead. If there were any differences, they would be sorted out after a sensible discussion.

At the risk of a spoiler alert, I have to ask you if you were okay with the ending of Season 2… you finally back out of the formal wedding to Samara.

I think it was just right. Okay, if there was a perfectly happy ending, that could have been an upper for the representation of the LGBQTI community. But that would have much too facile, a fairy-tale, all’s-well quality which would have jarred. The very fact that a whole elaborate wedding was staged and Umang walks away from it, caring a damn about ‘log kya kahenge’ was spot-on. Because love equals  respect, and when that balance teeters it isn’t love any more. 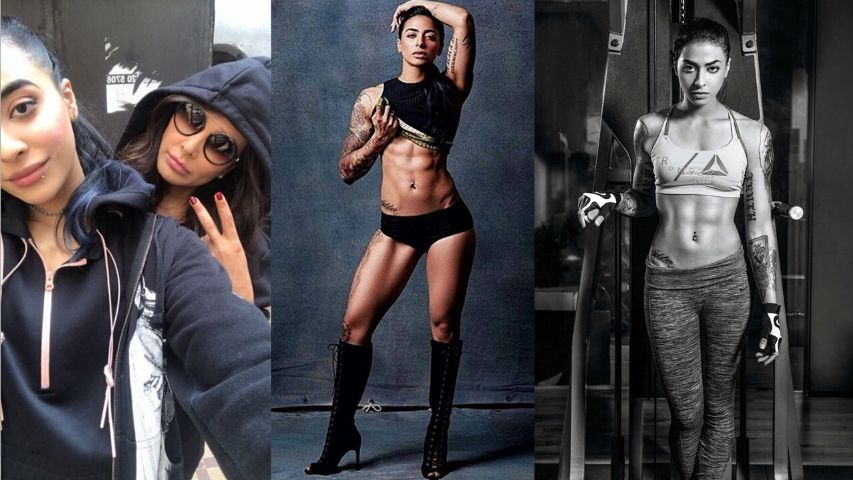 In Season 3, what’s likely to happen between Samara and Umang?

By now, it has been well established that Umang is on her own. Enough drama has happened between Samara and her. Both our characters should take it easy for a while maybe. Samara should date some other chicks, and Umang should discover whether she can handle her own life, without an emotional crutch.

I’ve been offered quite a few cool films, one of which was to be shot abroad. And Season 3 was scheduled to take off and should have been completed by now. But as you know everything’s on hold. I’m told the shoot will recommence some time in June… but really, will it? Till then, I fine with being a hermit at home with Patch, stepping out occasionally for groceries.

Anything else to declare?

Woah that sounds like a question asked by the airport customs officers. Sorry but I never carry anything on which I have to pay duty. I see myself in a zone and time, where I’m being called an actor though frankly I see myself more as an entertainer or a story-teller.

When I’m asked about my age, I really don’t know what to say. I may be 32 but there are days when I feel like an old granny who wants to curl up in bed at 8.30 at night and get up in the morning to go for a long run. And there are days when when I feel like a child, thrilled when something unexpected – a parcel containing a toy, a sweet letter, anything –  fetches up for me in the mail. Yeah, so I oscillate a lot like a pendulum, from one extreme to the other.

Which extreme are you at now?

Right now, I’m talking my head off. Once you hang up, I can and probably will go silent for hours.