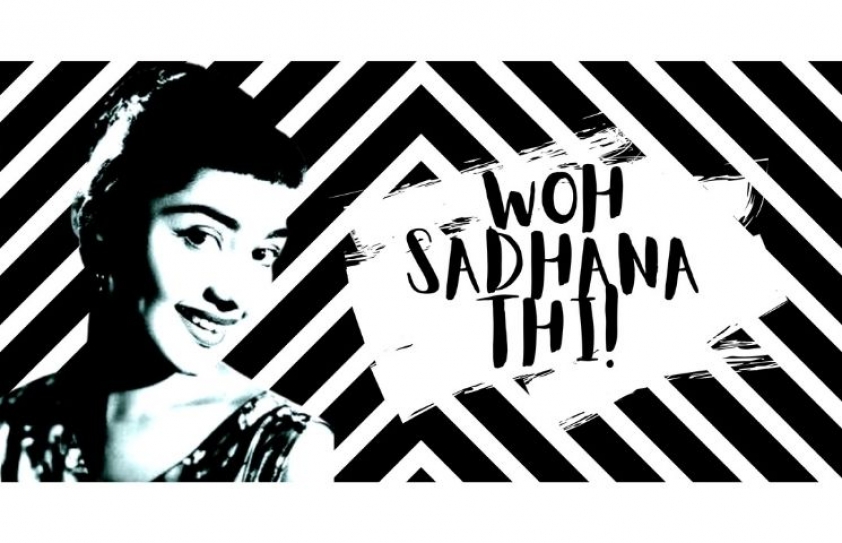 The cine-young living in the 60-year-old that I am, refuses to abandon my lingering fascination for actress Sadhana, writes Aparajita Krishna

She rests in memory beyond the temporal (1941-2015). So, when Sadhana memories knock I indulge. Her stardom deserves a serious analysis.

Sadhana Shivdasani’s mystery and mystique ruled Hindi cinema most actively between 1960 to early 1970s. To the generation now fashioned, fixated on Deepika Padukone, Alia Bhatt and their colleagues, a time-machine taking them back to the 1960s would reveal a Sadhana persona that would ring as updated today as yesterday. If truth be told, Alia Bhatt who is a very consummate actor with superior acting skills, will find it difficult to outdo in her acts Sadhana’s very selective repertoire of diverse films, their quality. The senior actress’ films spoke and sang texts and lyrics that were so superior. Her songs were poetry in motion.

Sadhana was born in Karachi in Sindh from where the family migrated post partition to settle in Bombay. She was the only child. Ah! That resonates further with me. Her father was the elder brother of actor Hari Shivdasani, who was actress Babita’s father. Her mother is said to have home-schooled her until she was 8 years old, after which she studied at Auxillium Convent, Wadala and at Jai Hind College.

It is said that actress Nutan was her inspiration. In her caliber as an actress Sadhana may not have been in the league of say Nutan or Waheeda Rehman, but her stardom got stamped for perpetuity thanks to her persona, which combined the Indian with the modern-western wonderfully, a very pleasant face, appealing and understated acting, sense of fashion, a fine line-up of films that sensitively sang chart-bursting melodious songs.

Fittingly even if fortuitously her debut into films was as a chorus girl in the song ‘Mur mur ke na dekh mur mur ke’, in Raj Kapoor’s Shree 420, it seems she was acting inclined and would participate in college plays. The producers of India’s first Sindhi film Abaana (1958) saw her in a play and cast her in the film as Shiela Ramani’s younger sister. But it was Filmalaya production’s Love in Simla in 1960, produced by Sashadhar Mukherjee and directed by R.K.Nayyar, that catapulted her to her cinematic tryst. This rendezvous defined a stardom that was modern, qualitative and uniquely Sadhana’s. It also partnered her for life with producer-director R.K.Nayyar. 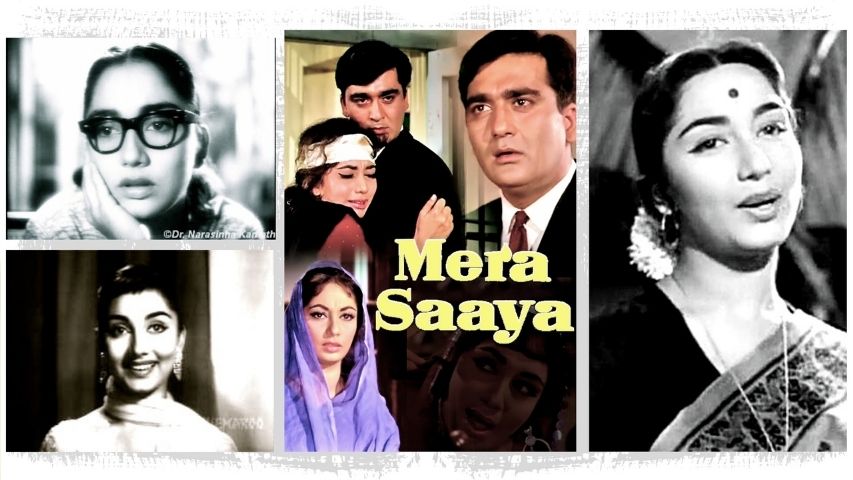 The Sadhana fringe, la Audrey Hepburn, that was also enacted on-screen as a hair-cut in Love in Simla, not only shaped Sadhana’s face but a legion of other Indian faces including yours truly. I carried that Sadhana-cut till my teens. This high-priestess of fashion was a reference for not just the aesthetics of stardom, but for fashion in clothes, jewelry, hair-style. Bhanu Athaiya who went on to garner such repute as a costume designer had way back in the years synergized with the star. My flashback recalls that back in the 1960s and 1970s the tailors and jewelers of my hometown Muzaffarpur in Bihar would be shown Sadhana features in magazines and even taken to the cinema-halls to copy the design of her churidar-kameez, the way she folded her saree and the designs of her ornaments. All the hair-salons in my native town displayed the Sadhana-Cut. There were many Sadhana wannabes acting in us all.

Fashionista apart what has to also be recalled is that Sadhana merits high mention as a star-actor whose repertoire of films resonate with diverse genres, even if the poetic suspense-thrillers lead the pack. They had fine texts and poetic songs. Her understated, pleasant demeanor, earnestness in acting got reflected in her roles. Her gentle, melodious voice spoke with a soft naturalness and she carried her roles with grace, elegance and measured acting. She had directors like R K Nayyar, Bimal Roy, Raj Khosla, B R Chopra, H S Rawail and the likes direct her and co-actors like Joy Mukherjee, Manoj Kumar, Dev Anand, Sunil Dutt, Sanjay Khan and others as co-stars.

Sometime in 1993-1994, after much persuasion from my end and good-will requests from my bosses, Mahesh Bhatt and Amit Khanna, the 52-53 year old diva/prima donna of my times, now living as a recluse, agreed to grant me an interview for a DD television programme. There was, of course, a rider. She would talk but not face the camera. Over the past years health issues driven by eye problems due to hyperthyroidism had made her very conscious of its effect on her face. But here was I getting the chance of my lifetime and owed it to my childhood and teenage years to agree to her terms. As long as I could talk to her for the camera! Our team landed up at her bungalow to record the interview. Sadhana was in silhouette facing the camera and me in full light. That interview eventually got edited and shots of her in silhouette got interspersed with a hint of her hands, her feet, clips from her films and her photographs. She spoke eloquently. The real-life feature carried elements of the mysterious and the enigmatic; just like many of the roles she enacted. A link of her radio talk with RJ Anmol given after 30 years and uploaded on the net in 2011 made her sound as young as in her heydays. 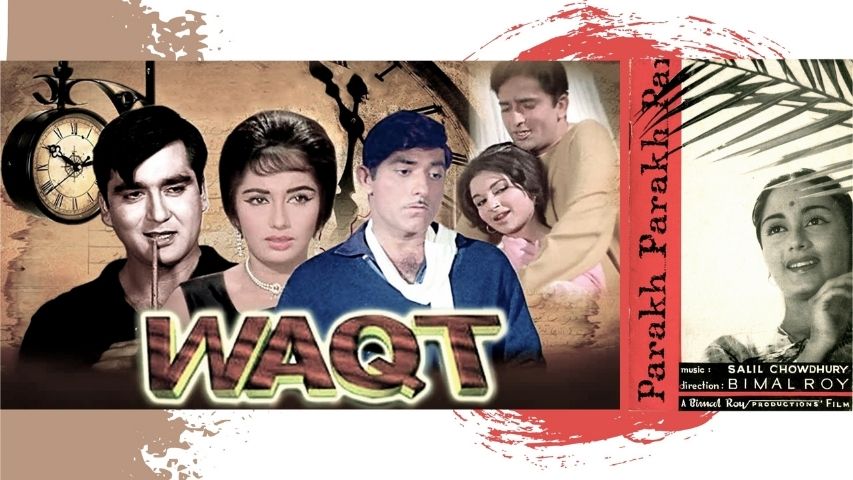 Cut to 2015. Sadhana was in front of the TV news-cameras fighting for her right over her bungalow (Sangeeta at Santacruz) against a builder. She had emerged from her shadows to fight her legal battle. As the curtains came down on her, the death was covered by the media as ‘lonely’, ‘tragic. She was living alone post her husband’s death. The couple were childless. The film industry citizens did come to give her a farewell.

Here are my chosen Sadhana-cuts, as in the films that will remain references with immortal accompanying music.

A plain Jane and an orphan, Sonia gets a makeover to woo the hero. She debuted with Joy Mukherjee in this Black & White Filmalaya Production. R.K. Nayyar helmed the project. While lightheartedly delving into the importance of her looks for a modestly placed girl to woo a well-placed suitor in marriage, the film set in elite Simla, the former summer capital of the British, captures the colonial hangover too.

A young Sonia gives vent to her pent up emotions and takes up the challenge to steal the affections of the young Dev, the smart suitor of burra sahib’s vain daughter, her cousin. Grandmother is the only support and she gives the young Sonia a physical and behavioral make-over including a fringe on her forehead.

The Cinderella story has moments of mirth, bumbling humour, shenanigans and the protagonist shows requisite gumption to break the stereotype and be focused in her effort to win the man and prove her worth in this act. In the film Sonia wins a beauty contest and is awarded a three-year film contract with Filmalaya. In real-life too, Sadhana signed a three year contract with Filmalaya. And her reel-director became her real life suitor and eventually her husband. 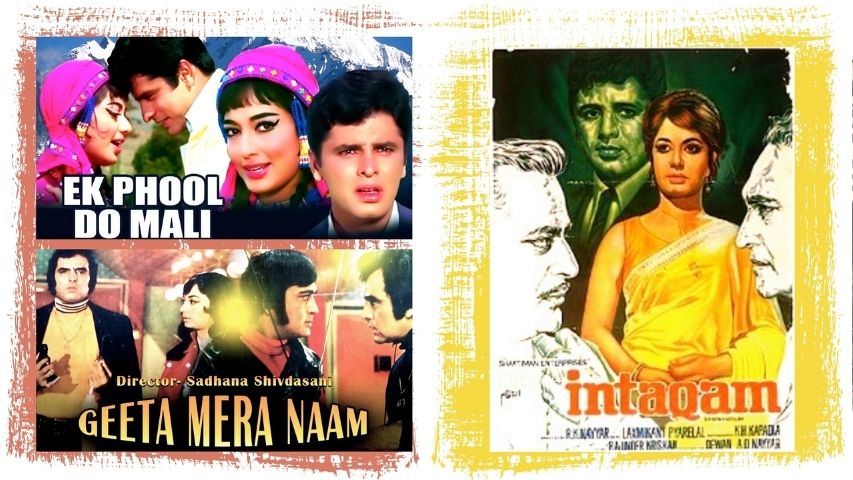 Soon the debutant was noticed and signed by the acclaimed director Bimal Roy for Parakh. Based on the story by music director Salil Chowdhary, it is a satirical film on Indian democracy, in its early years, interwoven with a simple love story. Sadhana portrays a simple village girl, Seema, in love with the school teacher. The director of very realistic films would not have his protagonist carry an urbane fringe on her forehead. The fringe had become a rage by now and many Indian girls sported it. The Sadhana Cut! For Parakh the actress was given a different look and the fringe had to be stuck back. She enacted her role with requisite gentility and looked most fitting in the simplicity of the role. It was a dramatic change-over from Love in Simla. The film was a semi-hit but got immortalized with the song ‘O Sajna Barkha Bahar Aai….’ sung most mellifluously by Lata Mangeshkar, penned by Shailendra and composed by Salil Chowdhary.

Sadhana as a love interest of one of the Dev Anands in a double role enchanted her act with fabulous songs. She was captivating in the songs ‘Abhi Na Jao Chhod kar…’, and ‘Jahan Mein Aisa Kaun Hai Ki Jisko Gham Milla Nahi.’

She was again paired with Dev Anand; this time by director Hrishikesh Mukherjee. And yet again she had a melody beautifying her act: ‘Tujhe Jeevan Ki Dor Se Bandh Liya  Hai’, ‘Tera Mera Pyaar Amar’.

One of the best in the genre of Muslim Socials it keeps getting invoked by generations thereafter. The Sadhana of black & white magic was now in technicolour. The song ‘Mere Mehboob Tujhe Meri Mohabat Ki Kasam’ serenaded her to become a rage. The film was a box-office top grosser. 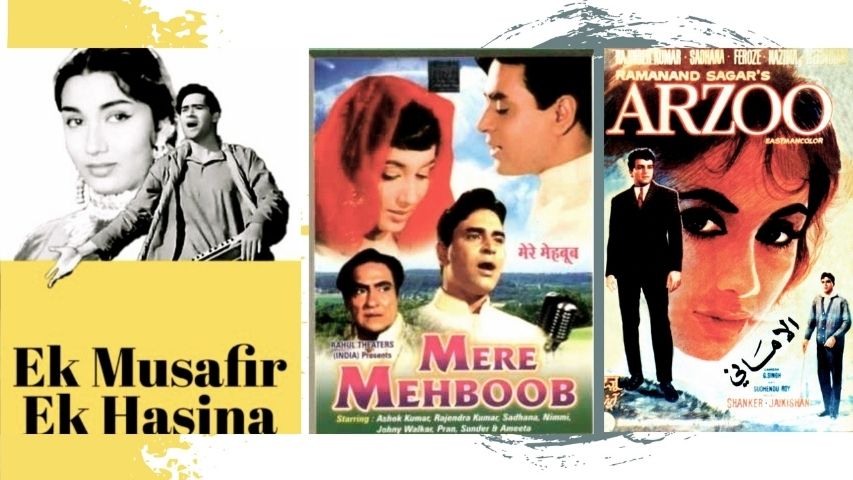 Sadhana played a double-role in this suspense thriller directed by Raj Khosla. It went beyond the genre to being beautifully lyrical. It earned her the first Filmfare nomination as Best Actress. ‘Naina Barse Rimjhim Rimjhim’ and ‘Lag Jaa Gale’ emerged to be immortal songs.  The Sadhana mystique got stamped with this film.

Again a hit film with hit songs like ‘Aaja Aayi Bahar’ with Sadhana in the lead.

This timeless multi-starrer spearheading the lost and found theme had Sadhana play the pivotal female lead with two brothers vying for her affection. She stood out in this ensemble cast and again got the Filmfare nomination for her act.

Raj Khosla went on to cast Sadhana in yet another very successful suspense thriller. The shadow of the mystique acts defined the heroine. And what to say of the songs like ‘Jhumka Gira Re Bareilly Ke Bazaar Mein’, ‘Naino Mein Badra Chhayye’, ‘Tu Jahan Jahan Chalega Mera Saya Saath Hoga’!

Raj Khosla’s suspense genre again had Sadhana in this film. This last of the trilogy was not successful at the box office though.

R K Nayyar directed this revenge act film which was a success at the box office. This came post Sadhana now getting afflicted with her eye illness.

Sachaai (1969) was yet another hit in her repertoire and Ek Phool Do Mali (1969), A love triangle with her in the female lead did well. Its story and sentiments, even sentimentality, touched the chords. The songs added to the story. 1970 saw Sadhana in Ishq Par Zor Nahi and 1971 saw her in Aap Aaye Bahar Aayi. Both the films still have a recall. By now Sadhana’s eye problem had come to show prominently. She started becoming a recluse. Geeta Mera Naam (1974) had her in the lead in a double role, but tragically the end of stardom was writ large. It has Sadhana in the credits as the director. Film-lore notes the film as choreographer Saroj Khan’s first film as an independent dance director.

Sadhana may have become a recluse shying away from the print and television cameras that wanted to talk to her and see her, but she bravely went about the behind the scene act and produced the film Pati Parmeshwar (1989) starring Dimple Kapadia. It met with a very tepid response. It was in 2014 that the 73 year old veteran made a rare public appearance walking the ramp at a fashion show in support of cancer and AIDS patients. Ranbir Kapoor escorted her.

In 2015 this enigma of her times bid adieu to all appearances as she breathed her last.