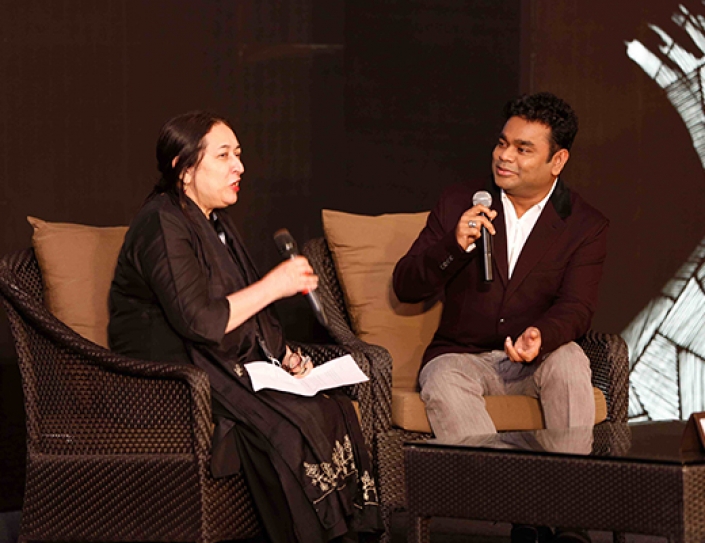 The awards were presented by Marco Mueller (Mentor, WIP Lab-Fiction) and Derek Malcolm (Mentor, WIP Lab-Documentary) to the winners. While announcing the award, Derek Malcolm said, “Every year I come here, the documentaries get just a little bit better and this year, in particular, has been a very good year.”

Jaiprakash Naidu, Executive Director at Prasad Film Labs said, “It’s been 5 years that we have supported this initiative of NFDC. We are honored to be associated with this initiative by NFDC to encourage fresh talent. I take this opportunity to request to all the participants in WIP or Co-Production that if they need any help for post-production, Prasad group is there.”

At the award function and closing ceremony, Nina Lath Gupta – Managing Director, NFDC India said, “The response at the ninth edition of Film Bazaar has been overwhelming. It’s been great to see Indian cinema grow. For me, every film that does well is my baby, I take immense pride. Every award, every bit of critical acclaim earned by you all over the world is my award. I thank you all.”

Started in 2008, Film Bazaar has come a long way and become a sought after annual film market that connects filmmakers with producers, distributors and critics. This year’s Film Bazaar marked many new beginning besides creating networking opportunities for mainstream as well as new filmmakers and saw participation of more than 1100 Delegates from over 38 countries.

The other highlights of the last day of Film Bazaar included the Knowledge Series session of Nasreen Munni Kabir in conversation with AR Rahman on ‘Films and Beyond’. While asked about the evolution of music in the film industry, Rahman says, “The soul of music still remains the same. Earlier lyrics were written first and then the tune was created. Now we all have advanced with time and there are many different ways to make music. There are times when the tune is created and then lyrics are written.”

Talking about working with first time filmmakers, Rahman says, “I am a very approachable person, not a monster. I have met and worked with a lot of first time filmmakers. Sometimes it works very well and sometimes it’s a disaster. When my name is used, it’s presumed that it will win Oscars. We don’t always make music to win an award.”

Working with international stars like Mick Jagger, Damian Marley, Rahman says, “When I was first called by them to jam in a studio, the first two days I didn’t know what was happening. I initially thought they were making fun of me but later Mick Jagger said he wants to sing Satyameva Jayathe and then rest is history.”

In another session of Knowledge Series moderated by Rajeev Masand, Vikas Bahl spoke about Choosing the film and Positioning it Right. He informed the attendees the importance of marketing a film in the right way and dealing with the failure of films. Sharing his experiences from Queen, he said, “We began shooting in Paris and ran out of money on the 7th day. 9 crore seemed an extravagant budget for Kangana Ranaut and myself. We were told to turn back but then on the 8th day, later we got funding from Viacom 18. We worked on the trailer for 1.5 years because we didn’t have buyers. Even when the movie released, the collections predicted were 15-20 crores but it had a dismal opening. Finally, it picked up due to word-of-mouth and ran for a long time and made money beyond our expectations.”

With the focus on NFDC’s objective to promote India as a destination for filming, today’s Knowledge Series had two sessions on Film in India with state focus on West Bengal and Daman – Diu & Dadra Nagar Haveli. With State focus on West Bengal, Mr. Surajit Bose, Director of Tourism, the Government of West Bengal along with filmmaker Sudhir Mishra spoke about shooting there. Talking about his experience, Sudhir Mishra said, “I shot Calcutta Mail a few years ago. It’s only in Bengal that a police inspector will tell you a better angle for your shot. They have a great film institute which is the Satyajit Ray Film Institute so I would only recommend for them to have more technicians and a single window clearance liaison officer or guide.”

With focus on Daman – Diu & Dadra Nagar Haveli, Mr. Vinod P Kavle, Secretary (Tourism), DD & DNH along with filmmaker Karan Malhotra spoke about shooting there. Karan shot his debut film, Agneepath in Diu and sharing his experience he said, “30-40% of Agneepath was shot in Diu, which is actually a huge chunk of the movie. It’s a dream for any film maker, who wants to concentrate on film making. The support of the Government was very helpful in getting things done.”

The Film Tourism Symposium concluded with a session with the Ministry of Railways, which was represented by Sh. Narendra A. Patil, CPRO, to discuss the existing issues while shooting in various locations owned by the Railways and deliberate on the possible solutions for speedier clearances for filming.

Ravi Shankar, Filmmaker- Punyakoti, a Sanskrit Animated film; Bhaskar Hazarika,Filmmaker- Kothanodi, a Assamese feature film; Ruchi Bhimani, Producer for the documentary- Proposition for a Revolution were guest speakers for the session- Crowdfunding Campaigns – Telling an engaging story, which was moderated by Namrata Joshi– National Cinema Editor, The Hindu. Crowdfunding campaigns have helped bring unique projects to life. This session covered the journey of the two filmmakers and the producer on how they went about crowdfunding to complete their film. Both Ravi Shankar and Bhaskar Hazarika got funded by a well-known crowdfunding website named Wishberry.in.

Abhijit Avasthi, Co-Founder, CEO, Sideways Consulting presented on the topic Marketing Mantras for Indie films at the Knowledge Series. This session gave an insight on the cutting edge out of the box marketing strategies that could be crafted for such films to help push their distribution as well as consumption.

Filmmaker Sudhir Mishra had an informal session with the participants from all the three Screenwriters’ Lab on screenwriting and filmmaking.
Lunch on November 24th was co-hosted by Daman – Diu & Dadra Nagar Haveli Tourism and Puducherry Tourism; and the evening network event was co-hosted by Film Bazaar by NFDC and Dream Warrior Pictures.

ABOUT FILM BAZAAR
Film Bazaar in its 9th edition is exclusively created to encourage collaboration between the international and South Asian film fraternities. The market aims at facilitating the sales of world cinema in the region. The 2014 market saw an attendance of 1042 delegates from 38 countries with country delegations from Canada, South Korea and Poland. Film Bazaar will be held from 20-24 November 2015 at Goa Marriott Resort in Goa (India).

ABOUT NFDC
Incorporated in the year 1975 National Film Development Corporation Ltd is formed by Ministry of Information and broadcasting (GoI) with the primary objective of promoting the good cinema movement. NFDC is instrumental for creating an ecosystem to support the financing, distribution and development of independent films across the country.

For more information on the Film Bazaar click http://filmbazaarindia.com/