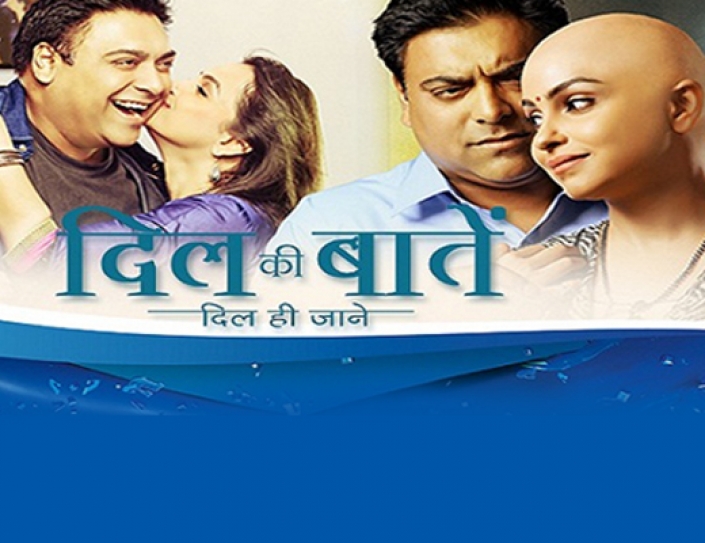 Sony Entertainment Television has given viewers a show which could challenge and alter viewing habits away from the standard family melodramas. Its newest show -- Dil Ki Baatein Dil Hi Jaane isn?t a pure family drama, as it may seem. Scratch the surface, and it will reveal that the practice of euthanasia is crucial to the story and one of the factors which colours the script.

How many families have been devastated when a member is diagnosed with Cancer? The dread this scourge holds is second to none. It?s known to wipe out families financially in an attempt to save the patient; furthermore it takes its toll on the mental and physical well being of the family, watching their loved one struggle. At the end of the day, the patient dies; leaving a confounded spouse and children. When patients opt to release themselves from suffering, they are denied that right.

Anandi Ahuja?s Cancer has resurfaced. She refuses to undergo another round of chemotherapy for reasons other than just cosmetic. Her priority is to conserve the family?s finances. She knows the illness is fatal; she doesn?t want to prolong her suffering and certainly doesn?t want Ram, her musician husband to dip further into their savings for another futile attempt to prolong her life. She just wants to be allowed to go. She wants Ram to switch off her life support machines. They fight over it and finally he relents. Making her meet the children in her favourite clothes, dressing her up like a bride. A touching sequence, as he paints her nails, applies the sindoor, etc

When it comes to the final moment, he can?t get himself to do it, she tells him to push her bed closer to the switch. He does so, but leaves the room, and the hospital, as she reaches out for the switch. The makers have spared the viewers sordid and archetypal death sequence. Anandi wasn?t shown in suffering, even in the last throes of her breath.

Ram Ahuja inexplicably walks out of the hospital and goes missing. He has been convicted for the murder of his wife, based on the CCTV footage of the hospital. As the police hunt for him, his father-in-law spurs them on; the children too finally believe their father killed their mother. They fend for themselves as they have rejected their Nanu?s offer to stay with him. The reason is that Nanu had turned his head away from Ram?s request for aid, and hadn?t taken his granddaughter?s call.

Is Ram Ahuja guilty of killing his wife by moving her bed near the switch? It was Anandita?s wish to pull the plug. As society is so wont to jump to conclusions Ram has killed his wife according to the CCTV footage. So everyone?s out to nail him.

The Ahujas are a typically middle class couple, who live in a housing colony where common walls and spaces leave little space for breathing in one?s privacy. The mindset of the neighbours is shown as authentic as our next door neighbours ? one minute the women are clucking away in sympathy for the children, and later the same women resent giving them food, etc. Questioning why they won?t go to their grandfather?s house.

A heart tugging scene is when Aarav is hungry; Disha rummages through the drawers where her mother could have stashed away some money. Makes an omelet sandwich for her kid brother and feigns she isn?t hungry. Sharing that last piece is a tender moment. There is some hilarity too. Aarav being sneaked into the girls? hostel and caught in the shower.

Mahesh Bhatt is capable of pulling out such moments. In Arth, Pooja and Raj are celebrating and a small pastry with a candle which serves as the celebration cake! In Dil Ki Baatein? we look forward to more such moments. Even the funeral scene was explored with serenity and as Disha performs the last rites her silent grief is in the tears she wipes away.

The plot hasn?t as yet come to the question of euthanasia and the rights of the patient to pull the switch. This we know will follow its own course. Perhaps now is the time to lay the roots of Disha and Aarav?s future.

As said in another column, Mahima Makwana who plays Disha shows exemplary talent. She was matchless in her outburst with her grandfather, and brings out all her tenderness in caring for Aarav. Ratna Shinde, who plays Aarav, is remarkably natural in front the camera, and heart tugging. So other than the adults in the cast, the young ones have already shown that they can carry the scene on their shoulders. Ram Kapoor is in a refreshingly new look ? a shirt hanging out of his trousers. His talent remains the same ? extraordinary ? raging anger and gentleness alternate.

Although Sanjay Leela Bhansali took it up with Guzarish, Indian television hasn?t really explored the question of euthanasia. Maybe makers and channels alike had probably thought that it wasn?t Prime Time fare.

Dil Ki Baatein Dil Hi Jaane takes a look at the issue of assisted euthanasia. With Mahesh Bhatt and Guroudev Bhalla at the helm Dil Ki Baatein? will never meander in its narrative. At 21, the number of episodes telecast so far, this is just the beginning. Viewers have welcomed its fresh concept and outlook with open arms. One can also be assured that melodrama will certainly not find its way into Dil Ki Baatein?.
Dil Ki Baatein Dil Hi Jaane will lead Sony TV?s charge with untried concepts and a fresh approach to Prime Time content. Stories which now need to be told not just in non-fiction shows like Adamant or Crime Patrol or Code Red, but should be included as an intrinsic part of future fiction series. L