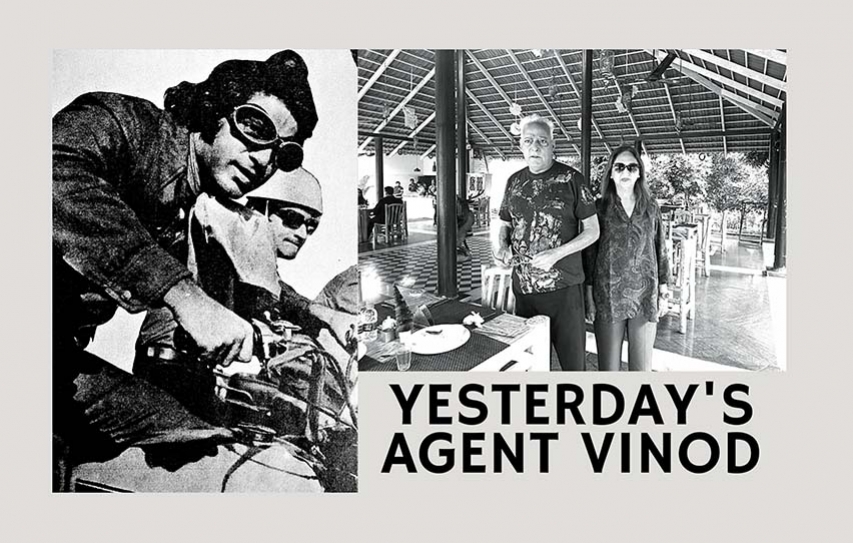 Film historian, Dhruv Somani, tracks down Mahendra Sandhu, to his farmhouse in Chandigarh for a freewheeling interview.

He’s Sandhu, Mahendra Sandhu. Now 73, this graduate of the Film and Television Institute of India Pune, who was once expected to be the next best thing on the movie block, now leads a relaxed, semi-retired life in Punjab.

Still, most famously known as Rajshree Pictures’ Agent Vinod (which was remade with Saif Ali Khan under the direction of Shriram Raghavan), he retains a loyal group of fans, which wonder why on earth he quit the Bollywood scene.

He was doing pretty well for himself career-wise and was most often compared with Dharmendra. However, he was dissatisfied by the kind of projects he was being offered, besides as he admits, he could have made some errors of judgment as well.

For instance, on being approached by the Movie Moghul Prakash Mehra at the suggestion of scriptwriters Salim-Javed, Sandhu had insisted on top billing in the credits over his co-stars Randhir Kapoor and Hema Malini. Exit Sandhu entered Vinod Khanna in the entertainer, which the audience flocked to in droves. Salim-Javed never recommended him for their projects again.

Being someone who was fascinated by Bollywood of the 1970s, I had often wondered why he hadn’t soldiered on regardless. He’s on Facebook and I managed to get his cellphone number in Chandigarh to check out the curious story of Mahendra Sandhu for myself. Neither nepotism nor bouts of depression following career fluctuations were buzzwords during his time.

I find the action hero to be super-convivial over the ‘phone, often laughing self-deprecatingly and also asserting that if he ever received a film offer he couldn’t refuse, then he’d surely toy with the prospect of making a comeback.

While expostulating on his yesterdays, he points out that he was born in Lyallpur (now in west Pakistan). His family of farmers and landlords moved to Patiala during the partition, and were allotted land. He was the youngest of a family of six, three brothers and three sisters. “Beautiful spacious houses and open fields were the playgrounds of my childhood,” he says, adding, “I was keen to join the Army or the Air Force but that was not to be.”

Subsequently, he joined the College of Patiala. Circa 1968, he participated in the All-India Dramatics Contest in Shimla. His play was chosen as the winner and staged in Chandigarh as well. At the suggestion of a friend, he applied for the acting course at the FTII Pune. His father was livid, considering acting to be a degrading profession. Despite that, this would-be film actor took off for Pune. Along with Asha Sachdev, he belonged to the batch of 1972, a year junior to Jaya Bhaduri and Danny Denzongpa.

As soon as he graduated, Stardust – the film magazine - promoted him as a superstar in the making, thanks to his swag and ruggedly handsome looks. It was written then, that there was a miasma of strength and gentleness about him. He could have played a boxer, a long-distance swimmer, a car racing driver or an invulnerable commando.

After modeling assignments, his acting career was initiated by F.C. Mehra’s thriller Khoon Khoon, a film inspired by the Clint Eastwood starrer Dirty Harry. Here, he was cast opposite the upcoming Rekha who was riding on the success of Sawan Bhadon. Followed Khoon ki Keemat in 1974, which did moderately well at the ticket counters.

As we chat on, without any interruption on a clear line, I learn that producer Tahir Hussian had planned a quickie with Dharmendra, Hema Malini and Vinod Khanna in the main leads. But due to their date hassles, he altered the cast to Mahendra Sandhu, Reena Roy and Rakesh Roshan.  Titled Madhosh, the project featured the producer’s son Aamir Khan in the childhood role of Sandhu. One of its high points was the song Gulabi Aankhen Sharabi Chehra composed by R.D. Burman and pictured on Helen and the lead players.

Producer A.V. Mohan’s whodunit Goonj directed by S.U. Sayed repeated the team of Sandhu, Rakesh Roshan and Reena Roy and it proved to be fairly successful. A bond of friendship developed between Sandhu and Roshan who stayed in the same apartment block at the time.

“Since I came from a secure background,“ Sandhu states, “I didn’t need to struggle or beg for roles. I held on to my principles, refusing to play along with the tricks of the trade.” As it happened, he was soon described as arrogant and admits that he had temper issues, which irked filmmakers.

Hence he drifted back towards his hometown and acted in Punjabi films like Sukhi Parivaar, Videsh and Habari with heroines like Preeti Sapru and Diljit Kaur.

Didn’t he miss the Bombay scene? To that his response is that he did return to the fold in 1977 with the spy caper Agent Vinod – A Rajshree production directed by Deepak Bahry opposite his colleague from the FTII, Asha Sachdev. Here was a major surprise hit. Yet producers still shied away from offering him lead roles. He recalls that he was mainly offered villain parts by frontline filmmakers like Ramanand Sagar and Shakti Samanta.

He was told that he could be the next Shatrughan Sinha or Vinod Khanna, who were both enacting the antagonists’ role at the time. “Sorry but I couldn’t see myself as a bad guy being beaten to pulp by heroes half my size,” he laughs. “Imagine as the villain I’d even have to act as the heroine’s daddy or uncle.” 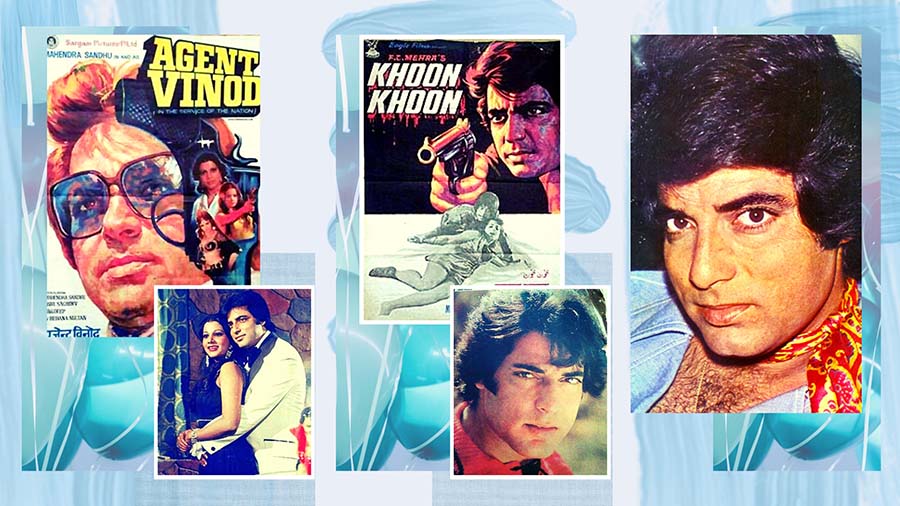 Not to be stymied, he produced Mujhe Vachan Do (1983), a dacoit drama starring himself opposite Neeta Mehta directed by Shibu Mitra. Commercially, it performed averagely. Ditto his next production, Kaun Kitne Paani Mein (1987) starring himself with Aarti Gupta, Anuradha Patel, Amjad Khan, Shakti Kapoor and FTII buddy Danny Denzongpa. With his third production Kisme Kitna Hai Dum (1992), Sandhu directed himself and starred opposite Swapna, Danny Denzongpa, Om Shiv Puri and Suresh Oberoi (who gave him hell during the shoot of the film). The result was an outright flop.

Mahendra Sandhu, evidently has an elephant’s memory and can be mercilessly self-critical: “Guess it was my fault. I didn’t go along with the flow. Trends were changing by the minute in the 1990s - action was out, romance was in. Aamir Khan, Shah Rukh Khan and Salman Khan changed the face of the hero.

“Moreover, film budgets were shooting through the roof. The risk factor was way higher. Yeah, it wasn’t possible to continue so I quit instead of spending money recklessly.” Close friends Danny Denzongpa and Romesh Sharma persuaded him to give a shot to the TV serial Ajnabi (1994). He was seen in the serials  Noorjahan (2000) and Draupadi (2001), produced by Prem Kishan of CineVista Productions. But yesterday’s dynamic Agent Vinod felt sidelined, and quit finally to focus on his family and farming.

On the personal front, his life was smooth. He is married to Sunita Sandhu Surendranath, daughter of veteran actor Surendranath and sister of ad-film maker Kailash Surendranath. They have two daughters both of whom are married.

Since the last few years, he has been travelling to the US and Canada during the summer months. During the winters, he is to be found at his farmhouse in Chandigarh or at his farm-cum-resort in Palghar, on the outskirts of Mumbai. He has retained a well-appointed apartment in Versova. If he does meet up with anyone in showbiz, it’s only Dharmendra.

Last question: Would he agree to act in a web series or a film for the streaming channels? To that, he laughs uproariously, “Sure, as long as they don’t ask me to play a nana or dada.”