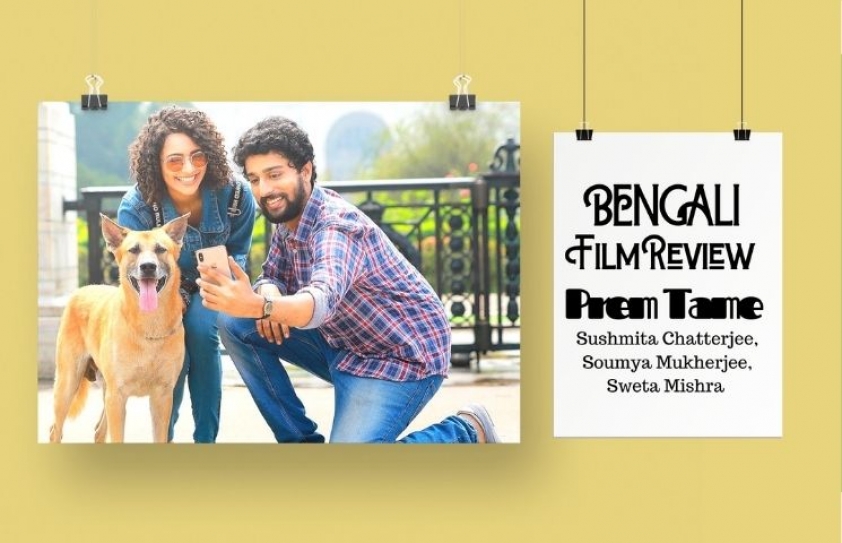 Somewhere near its halfway mark, Anindya Chatterjee’s Prem Tame has a series of sequences that for me encapsulate everything that is wrong with the film. After a puerile, seemingly interminable conversation in a college library (one of many infuriatingly interminable conversations in the film), the fiery non-conformist activist Raji (Sushmita Chatterjee) tells the lovelorn Pablo (Soumya Mukherjee) that he reminds her of the character Nyara, in Haa Jaw Baw Raw Law (that classic children’s tale by Sukumar Ray), who willingly becomes an accused because he is promised money; in Pablo’s case, Raji reiterates, he has been declared an accused and hasn’t even received his compensation, given that he has been suspended for immoral conduct even though he never quite kisses his classmate Arshi (Sweta Mishra).

However much I have been raking my mind since, I fail to find the connect the screenplay makes between Pablo and Nyara. Immediately following this is an exposition, in the words of Raji, of the histories of settlements around the Hooghly – and despite Shubhankar Bhar’s cinematography (one of the film’s few redeeming features), the sequence never quite evokes the wistfulness or awe contained in the dialogue: ‘Only those who venture out to never return are able to write histories’. Soon after this, we are witness to the absurdity of young students in a police station locking lips as a protest against moral policing - absurd because the film never quite measures up to the loftiness of some of the ideas it tries to cram in its screenplay.

Now, unpredictability can be a virtue in a film – it keeps the viewer engaged, anticipating what the director will serve up next. However, what comes across in the three aforementioned sequences, which rapidly follow one another is not any intentional unpredictability but a string of loosely structured ideas that never come together cohesively. That then is the bane of Prem Tame – a plodding, turgid screenplay choc-a-bloc with sequences that keep playing well beyond their breaking point (consider, for example, the one between Raji and Pablo where the latter suggests they move in together). 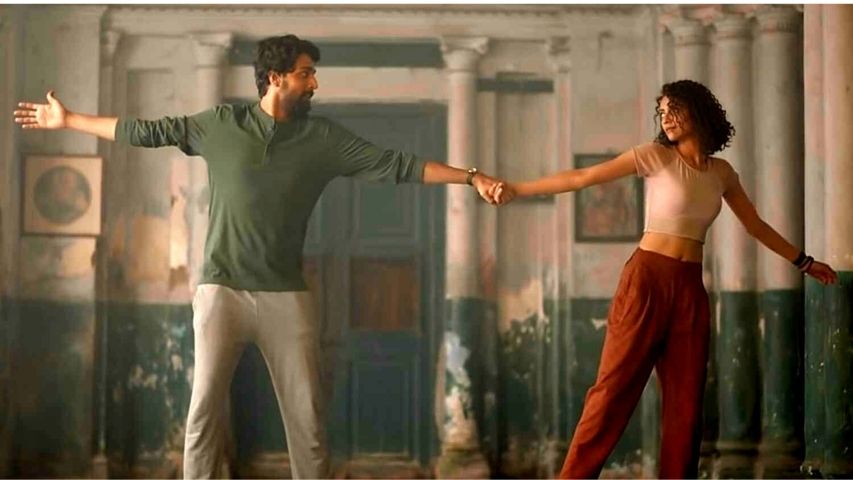 Which is unfortunate because on the evidence of Anindya Chatterjee’s previous films – Open Tee Bioscope, Projapoti Biscuit, Manojder Odbhut Badi – he has a flair for the quirky, the unpredictable, with a wonderful feel for dialogues. But what do you make of what goes for dialogues here - kisi (slang for a kiss) being rhymed with TC (a transfer certificate), social/antisocial with Shreya Ghoshal, Kalidas with Adidas - or references to politics as poltu and culture as cultu, or for that matter, the wordplay on Michael ‘Dog’las, ‘Dog-father’ and ‘Dog-ma’, that Pablo and Raji engage in vis-à-vis the stray Khogen she has adopted and which moves in with Pablo when she does. Beyond a point, I just got the feeling that these must have come across as really amusing during narration and scripting, but in the context of the characters mouthing them, they are flat and unfunny. They remain just a string of smart witticisms that exist in a vacuum.

It does not help that the three leads are as vapid and unconvincing as they are. Even given the randomness behind why two people are drawn to each other, I could never figure out what makes Pablo so attractive to Arshi or Raji. Here’s a loser, if ever there is one, who shows no agency anywhere in the narrative. But then Arshi is probably just the kind of girl who would pine away for someone like Pablo (they reminded me of a two-line poem titled ‘Their Sex Life’ that I read decades ago: ‘one failure on top of another’). Then there’s Sushmita, playing Raji, affected Bangla accent and a penchant for street-smart vocabulary, who is convincing neither as the free spirit she projects nor as the spunky activist. But the problem lies not just with the performances but with the writing too – the actors mouth the dialogues they are given but never quite become credible as the characters they play.

In a rather long film (at 130 minutes it seems to go on an on), there’s a surprising lack of development in the character arcs too, though the director is at pains to convey, say, Arshi’s ‘growth’ in the way she approaches taking an anti-rabies shot towards the end of the film - ‘I am not scared of anything anymore,’ she says - contrasting her reaction in a similar sequence early in the film. Too pat. Soumya does display a winsome vulnerability in the last quarter of an hour, where the film manages to get its act together, but you wonder if that’s because he is sharing space with the only actor who holds your attention in the film: Khogen, the stray dog who inveigles his way into Pablo’s and the viewer’s heart.

What redeems the film are its cinematography – beautifully capturing the mofussil feel of Serampore-Chandernagore, the stately old-world heritage, the elegance of colonial buildings, the parks and cemetery – and the soundtrack, which isn’t surprising given the heavyweights in the credits: Anindya himself, Prasen, Anupam Roy, Shibabrata Biswas and Shantanu Moitra. However, it’s a telling reflection on the sluggish narrative that despite the brilliance of the songs, you just can’t help wishing the director would get a move on.

It is only in the last quarter of an hour that the film manages to create something really unconventional as Pablo goes looking for the Khagen, whom he has so heartlessly abandoned only a while ago, and as the soundtrack comes alive to delectable Sufiana strains of ‘Saawariyan’ (an exquisite number that the rest of the film just does not have the wherewithal to do justice to). This section of the film is so wonderfully done and is so evocative that it seems to belong to an entirely different film altogether. Again in a telling reflection on the rest of the film, this section is largely wordless and throws into painful relief the verbosity that mars it.

In the end you keep wondering … is Prem Tame a rom-com? Or a coming-of-age tale? Or a philosophical take on love, freedom? The romance never quite soars, while the comedy is at best lame. As a coming-of-age tale you never get a sense of the characters becoming something over the course of the narrative. And as far as the philosophy goes, it never goes beyond the pop/instant variety.