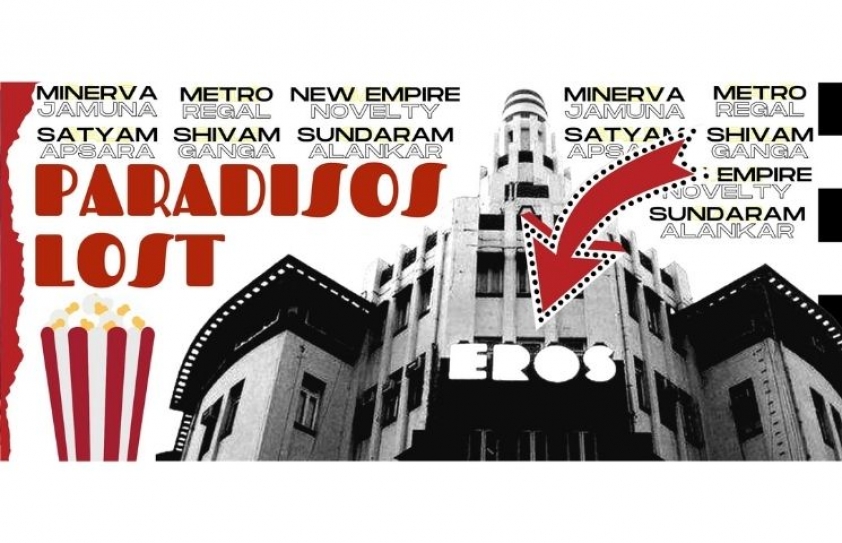 With the ongoing pandemic, the future of the surviving single-screen cinema halls is under a question mark. Film historian, Dhruv Somani, rewinds to the magical hours spent at the Cinema Paradisos of Bombay.

Once upon a time, theatres - or cinema auditoria - were the crowded hub for film lovers. Onlookers, black marketers, paan-sweets-chocolate and channa-mung-phali vendors and genuine movie lovers would gather for a smoke and gape at the movie posters and lobby cards artistically pinned on the display boards.

Bombay, being the center point for Bollywood was known as Theatre Darshan (just like Mumbai Darshan). Film fans would take a bus, taxi or the local trains close to Grant Road, Lamington Road, Tardeo, ending the ride at Bombay Central. As a movie buff the billboards and posters outside cinema halls fascinated me. There was a huge area opposite the Royal Opera House theatre, which exhibited hoardings of forthcoming attractions.

Here’s selecting some of the iconic theatres in South Bombay, which I visited often and have left a swirl of nostalgia in my heart. I will always miss those catcalls, claps, whistles, coins being thrown at the screen, and of course the posters, lobby and show cards.

Diagonally opposite Minerva, the art deco, opulent Apsara nestled in the midst of Lamington Road. Its white vertical beam pointed skywards. The interiors had a red-carpeted, winding staircase, which led to the balcony seats.

Once known as the Lamington theatre, it was redeveloped and owned by the former royal family of Jamnagar. Raj Kapoor’s blockbuster love triangle Sangam (1964) was premiered there. Portions of Hrishikesh Mukherjee’s Abhimaan (1973) were shot there. Qurbani (1980), Kranti (1981) and Prem Rog (1982) were some of the memorable films I watched there. It was one of the first theatres to close down in that area circa 1989.

This one was situated at the Gol Deval area, further down Grant Road. It came into the spotlight with the premiere of Raj Kapoor’s Jis Desh Mein Ganga Behti Hai (1960). Prakash Mehra’s Muqaddar Ka Sikandar (1978) ran to packed houses there for 75 weeks. After this every Prakash Mehra film would be released at the Alankar. I remember seeing Jwalamukhi (1980), Laawaris (1981) and Namak Halal (1982) there, as well as my favorite horror film Purana Mandir (1984) when it was re-released in the early 2000s since I was under age during the ‘adults only’ first run. The last film I saw there was Raj Kumar Kohli’s Jaani Dushman - Ek Anokhi Kahani (2000), which bombed at the ticket counters. 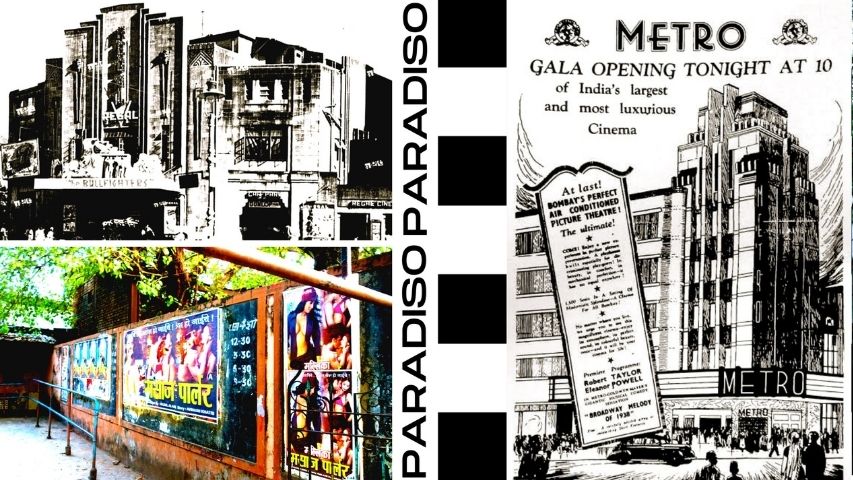 Situated opposite Churchgate Station, Eros was one of the oldest cinema destinations for the Sobo Bombayites. Like the Regal at Colaba, it boasted of state-of-the-art décor and was built in the 1930s. It showcased Hollywood imports since it was associated with Warner Brothers, which also had their office in the same building.

Eros also had a mini-theatre on the third level where I’d often see trial shows. Eros would attract a young crowd as it was close to colleges like H.R, K.C, Jai Hind and Sydenham.

This was the only twin complex in Tardeo, a brisk walk away from Bombay Central railway station. Ganga had a larger seating capacity than Jamuna. The twins became more famous with Amitabh Bachchan releasing there back-to-back.

Situated at Dhobi Talao, the opulent Metro was owned by the Guptas of the Marwari community of Bombay. Initially, it would screen Hollywood films of the M.G.M studio. Patronized by Sobo families, it drew mammoth crowds with Raj Kapoor’s Bobby (1973), which had its star-studded premiere there with Rishi Kapoor and Dimple Kapadia in attendance. Yash Chopra too released and premiered some of his noteworthy films like Chandni (1990), Lamhe (1991) and Darr (1993) there. Subhash Ghai premiered his Ram Lakhan (1989), Saudagar (1991) and Khalnayak (1993) at the Metro, as well as Trimurti (1995), which was a colossal flop.

Metro was the first choice to go to as it was close to home and tickets were easily available. Other films from my memory file at the Metro include Paap Ki Duniya (1998), Aankhen (1993), Teesra Kaun (1994), Rock Dancer (1995), Chhota Chetan in 3-D (1998) and Kuch Toh Hai (2003). My big fan-boy moment came when I had gone to see Barsaat (1995) marking the debut of Bobby Deol and Twinkle Khanna. Dimple Kapadia was sitting right in front of my seat and I kept looking at her more than I did at the movie.

After a brief closure, Metro re-opened in 2000 as Metro Adlabs. Next it was called Metro Big Cinemas until it was taken over by the Jains of Mumbai and renamed as Metro Inox. The commodious, aesthetically designed Metro was destined to become a multiplex. 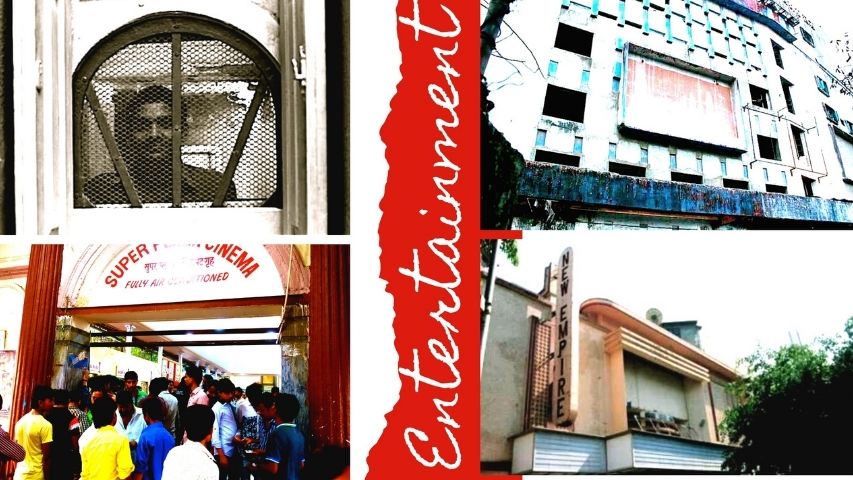 Owned by film producer F.C. Mehra, in partnership with Shammi Kapoor, Minerva was once a small quaint theatre on Lamington Road, which was redeveloped into a huge venue and was said to have the largest number of seating capacity in the city. F.C. Mehra’s Lal Patthar (1971) and the Shammi Kapoor-directed Manoranjan (1974) were showcased there.

Clearly, right till today it is associated in the public mind with Ramesh Sippy’s Sholay (1975), which ran there continuously for five years. It was one of the few theatres with stereophonic sound and one of the widest screens. It was called the Pride of Maharashtra.

Raj Kapoor’s three- part Mera Naam Joker (1970) was premiered at Novelty, which would often be called the ‘Theatre Magnificent’. Because of the inordinate length of the showman’s labor of love, the show timings were altered. Now considered a cult classic, it was a certified flop on its first release.

Krishna’s Shah’s thriller Shalimar (1978) had a grand premiere there with Dharmendra and Zeenat Aman, welcoming the invitees along with international stars. The theatre inspired restaurants and shops in the vicinity to be named Novelty while the hall served some delicious samosas and sandwiches. Some of the films I rushed there for were Do Aur Do Paanch (1980), Judaai (1980), Dard (1981), Badle Ki Aag (1982), Tohfa (1984) and Bade Miyan Chhote Miyan (1998). The last film I remember there was Shhhh (2014), which could actually be best forgotten.

At the outset, it staged plays in French and English, and converted to a cinema hall for foreign films. It is said to have belonged to the veteran actor-director-producer Sohrab Modi and his family. Located opposite V.T. Station it had a contract with specific Hollywood studios to screen their films. The Godfather (1972), Jaws (1975), Saturday Night Fever (1977) did whopper business there.

Among the Hindi films I recollect watching there were Ram Avatar (1984). And I would just go to watch the posters and stills of Purana Mandir (1984), displayed outside the theatre. I also remember seeing Aks (2001), Dil Chahta Hai (2001), Chandni Bar (2001) and Murder (2004) there. I did watch Neighbours (2014), directed by late Shyam Ramsay, at the almost empty theatre after which the management downed its shutters. 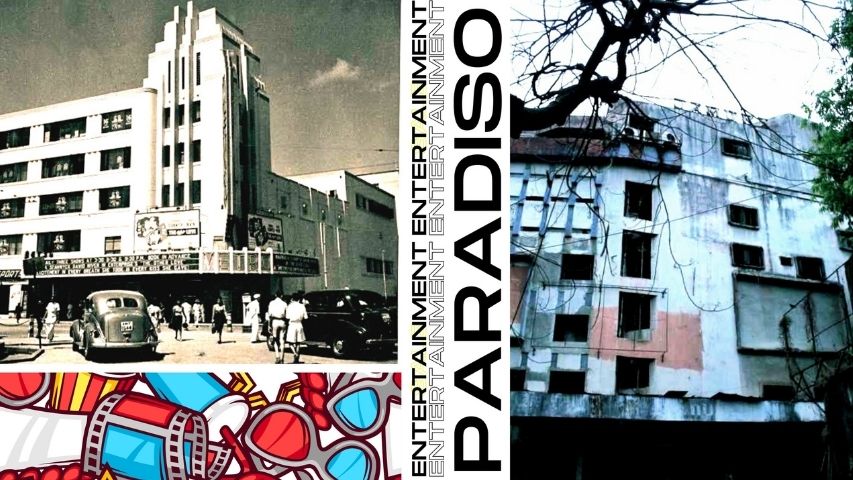 The beautiful, art-déco Regal still stands at Colaba.  It was built in the 1930s and is believed to be the city’s first air-conditioned cinema. It attracted droves of foreigners as it was within walking distance from of the Gateway of India and the Taj Mahal Hotel. It also was a cool walk, too, from the popular restaurants Leopold Café and Café Mondegar.

The theatre hosted the Filmfare Awards in 1959, which was attended by a galaxy of Bollywood stars. Regal was also known for showcasing the maximum number of James Bond films starting with Dr. No (1962).

Regal began to show Bollywood films from the early 1980s. B.R. Chopra’s Insaaf Ka Tarazu opened there, but again I couldn’t dare to enter the premises since it was for Adults Only. Another Hindi film I remember watching there was the action flick Tridev (1989) directed by Rajiv Rai.

Located at Worli, right next to the old passport office next to the iconic RPG House, Satyam Sundaram Sachinam was a triplex much like Badal, Bijlee and Barkha located at Matunga. The biggest in terms of capacity, Satyam, showcased the latest releases, which after a week shifted to Sundaram and thereafter to Sachinam, the smallest of the trio. Piquantly, Satyam theatre was visible in Manmohan Desai’s Suhaag (1979) during the song Main Toh Beghar Hoon shot on the beautiful Parveen Babi and Shashi Kapoor. Satyam’s underground parking was also used for picturing portions there for Qurbani (1980), Naseeb (1982), Dil (1990) and Khiladi (1991) to name a few.

There were other cinema halls, too, like Liberty, Capitol, Central, Maratha Mandir, Dreamland, Naaz, Swastik, Imperial, Super, Shalimar, Roxy, New Excelsior, Akashwani and the Royal Opera House. With the ongoing pandemic, the future of the surviving single-screeners is extremely uncertain. So many magical hours of our childhood belong to them. In the event, I can just keep my fingers crossed and hope that the show will go on.