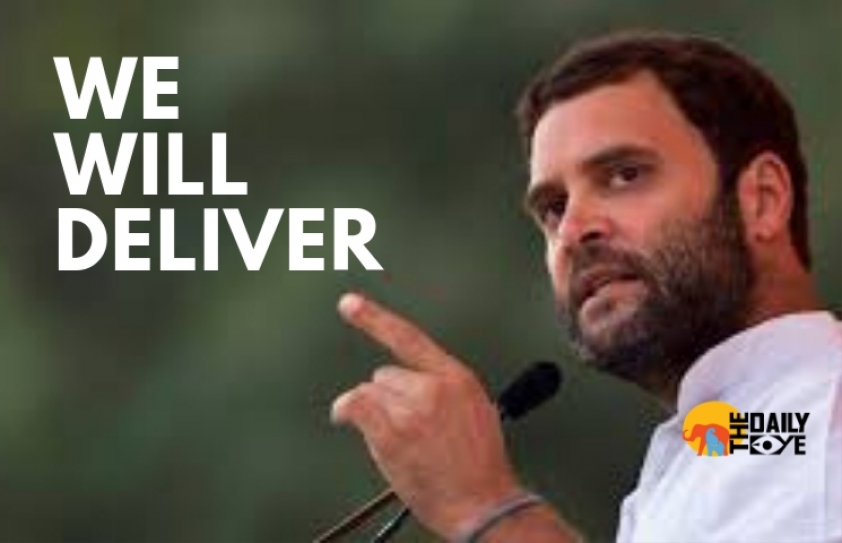 The Indian National Congress on Tuesday released its poll manifesto ahead of the 2019 general elections. Congress chief Rahul Gandhi, along with UPA chairperson Sonia Gandhi, former Prime Minister Manmohan Singh, general secretary Priyanka Gandhi and several other senior leaders released the party's election manifesto with the tagline "Congress will deliver". Here are some of the promises the party has made in the document.

To the youth of India, Congress pledges to make jobs their no.1 priority, both in the public and private sector. They will ensure 34 lakh jobs in the public sector by;

They will also provide a fillip to private sector jobs by;

For farmers, Congress promises to put them on the path from “Karz Maafi”, to “Karz Mukti”. This will be done through remunerative prices, lower input costs, and assured access to institutional credit. They will present a separate “Kisan Budget” every year. They will also establish a permanent National Commission on Agricultural Development and Planning.

Congress promises to enact the Right to Healthcare Act and guarantee every citizen free diagnostics, out-patient care, free medicines and hospitalisation, through a network of public hospitals and enlisted private hospitals. They will double expenditure on healthcare to 3 per cent of GDP by 2023-24.

Congress will radically simplify the GST regime with a single moderate rate of tax, zero rating of exports, and exemption for essential goods and services. They also promise panchayats and municipalities a share of GST revenues.

Congress will reverse the trend of declining defence spending under the NDA government, and increase it to meet the requirements of the Armed Forces. They will expedite all modernisation programmes of the Armed Forces in a transparent manner. They will improve social security, education and health facilities for our Paramilitary Forces and families.

Congress promises that school education from Class I to Class XII in public schools shall be compulsory and free. They will especially focus on learning outcomes. Schools will have adequate infrastructure and qualified teachers. To achieve this, they will double the allocation for Education to 6 per cent of GDP by 2023-24.

Congress promises to pass in the first session of the 17th Lok Sabha the Women’s Reservation Bill reserving 33 percent of seats for women in the Lok Sabha and the State Legislative Assemblies. Congress will also reserve 33 percent of all posts/vacancies in the Central Government for women.

They will implement, in letter and spirit, the Forest Rights Act, 2006 and secure for the Scheduled Tribes the rights guaranteed under the Act. No forest dweller will be unjustly evicted. They will establish a National Commission for Non-Timber Forest Produce. To improve the livelihood and income of Adivasis, they will offer Minimum Support Prices for NTFP.

They will pass the Right to Homestead Act to provide a piece of land for every rural household that does not own a home or own land on which a house may be built.

In the last 5 years under the NDA Government, hate crimes and atrocities against vulnerable sections of the people have increased manifold. Congress promises to end the sense of impunity, stamp out mob violence and lynching, and prevent atrocities and hate crimes against the SC, ST, women and minorities. Congress will hold accountable the police and district administration for proven negligence in the case of riots, mob violence and hate crimes.

Congress promises to uphold the values enshrined in the Constitution of India and protect their freedoms, including the freedom to dissent. Congress will pass a law on privacy; restrict the use of Aadhaar to the original purposes of the Aadhaar Act; protect the rights of every citizen especially students, journalists, academics, artists, civil society activists and NGOs. Congress will review all laws and repeal those that are outdated, unjust or unreasonably restrict the freedom of the people.

Congress promises to revitalise the institutions that were brazenly undermined in the last 5 years such as RBI, ECI, CIC, CBI, etc. Congress will restore their dignity, authority and autonomy while making them accountable to Parliament. In order to ensure free and fair elections, they will abolish the opaque electoral bonds introduced by the NDA government and set up a National Election Fund that will be allocated at the time of elections to recognized political parties.

Congress promises a comprehensive policy on urbanisation to address issues concerning our towns and cities, including city governance, livelihoods, housing, habitat, pollution, climate change, urban transport and disaster management. For the urban poor, they promise the Right to Housing and protection from arbitrary eviction, and a Slum Upgradation and Transformation Scheme. They will introduce a new model of governance for towns and cities through directly elected mayors. They will transform cities into engines of economic growth.

Congress promises an action agenda that will place India at the forefront of the battle against global warming and environmental protection. They recognise that air pollution is a national public health emergency and will significantly strengthen the National Clean Air Programme. Forests, wildlife, water bodies, rivers, clean air and coastal zones are precious natural resources that belong to the people and they will protect them. They will set up an independent, empowered and transparent Environment Protection Authority, redefine the role of the Forest Departments and increase our forest cover.