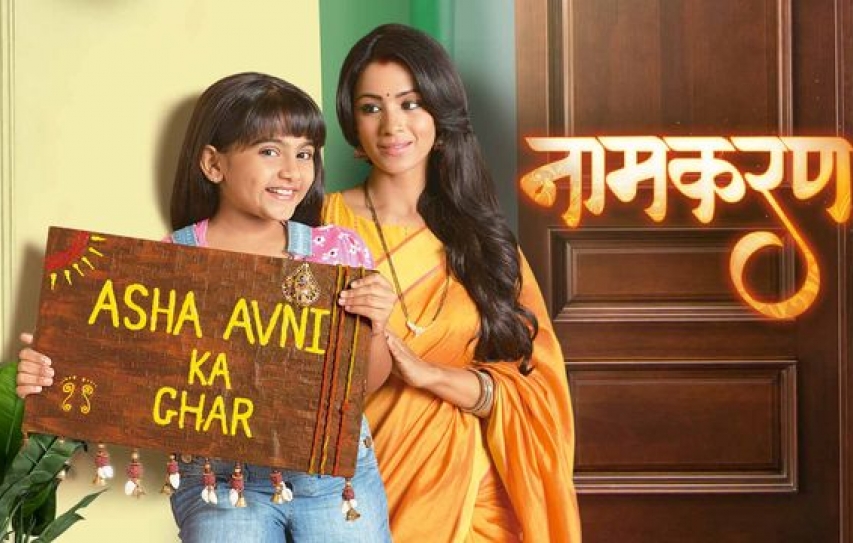 At 9 pm Monday to Saturday, Star Plus viewers have been struck by a young protagonist in Naamkaran; Arsheen Namdaar makes a debut as Avni Mehta. A gifted actor, she commendably shares screen space with the likes of Reema Lagoo. When she confronts Lagoo’s Dayawanti Mehta, the little actor has confidence oozing in every scene opposite the veteran actor. It is a treat to observe the young and the older actor confront each other, challenging each other with strong willed angst. Young Arsheen Namdaar shows her mettle with her expressive face and her eyes – angry at one time, showing complete disdain for her father and sparkling with joy for her mother. Arsheen Namdaar is the find of the season. Although Naamkaran has a strong supporting cast in Barkha Bisht Sengupta and Sayantani Ghosh, the protagonist Avani Mehta shoulders the narrative.
Naamkaran is the perhaps the first and only show currently to give pride of place to a young actor and soldier her on. Arsheen Namdaar is the find of the year and it wouldn’t be surprising if she clinches a few awards. However, what’s striking about the little actor is she is devoid of cute mannerisms. She is all expressions and spontaneity; and acting is a serious matter for her, so it would seem from her performance. Let’s hope she is allowed the full flow of her talent and the channel not succumb to the TRP greed and pull the plug. For no show to date has been on Prime Time with child in the driver’s seat.
Gangaa on &TV has Ruhana Khanna to meet the child star challenge. The little actor first played Ganga, the child widow, she won the Best Child Actress Award. Ruhana Khanna shared screen space with the likes of Sushmita Mukherjee and Jaya Bhattacharya, both actors were formidable challenges to the young Ganga. Ruhana’s innocent charm and acting talent earned her place in the viewers’ hearts; that it was her popularity that brought her back as Ganga’s daughter Krishna! Now Ruhana is here to stay.
Both Arsheen Namdaar and Ruhana Khanna have been lucky being cast in strong author backed roles, supported by a well placed cast of senior actors and directors who draw their talent to the maximum. Both seem to be the talent of the next generation.
Prime Time television has its share of child actors as part of the narrative, but it has been in the last eight years or so, that television in India has witnessed narratives with child actors as protagonists, as in Colors’ Balika Vadhu and Udaan. Both shows carried a strong social message against child brides and bonded labour.
Set in Rajasthan where child marriages still prevail, Balika Vadhu is the story of Anandi (Avika Gor) and Jagdish (Avinash Mukherjee) who were married as children. Avika Gor was the face of Anandi and her pudgy charm and her natural effervescence endeared her to the viewers. Both Avika and Avinash received awards for their performances. Post Balika Vadhu, Avika Gor landed a plum role in Sasural Simar Ka. A lean, mean Avinash Mukherjee was noticed in Itna Karo Na Mujhe Pyar.
It is indeed Spandan Chaturvedi who was the face of Chakor in Udaan. She carried the narrative on a frail looking shoulders for two years. This spunky, little girl was Prime Time’s first pint sized star to have a following and be invited on reality shows. When she appeared on Comedy Nights with Kapil, she shot a few bouncers his way. She oozed spunk and charm, with equal measure of talent. Udaan was Spandan Chaturvedi’s flight to starring roles. Till then she played regular child actor roles.
Tapu Sena of Taarak Mehta Ka Ooltah Chashma are the apt way to round off a tribute to the little stars of the small screen. The five of them are truly a delight with their riotous pranks and their individual traits. On Children’s Day let’s give a round of applause for the five child actors now teenagers -- Bhavya Gandhi, Nidhi Bhanushali, Samay Shah, Kush Shah and Tarun Uppal. What is even more laudable is that all of them have been part of the show since July 28, 2008; I would say that’s something of a feat for an ensemble of child actors.