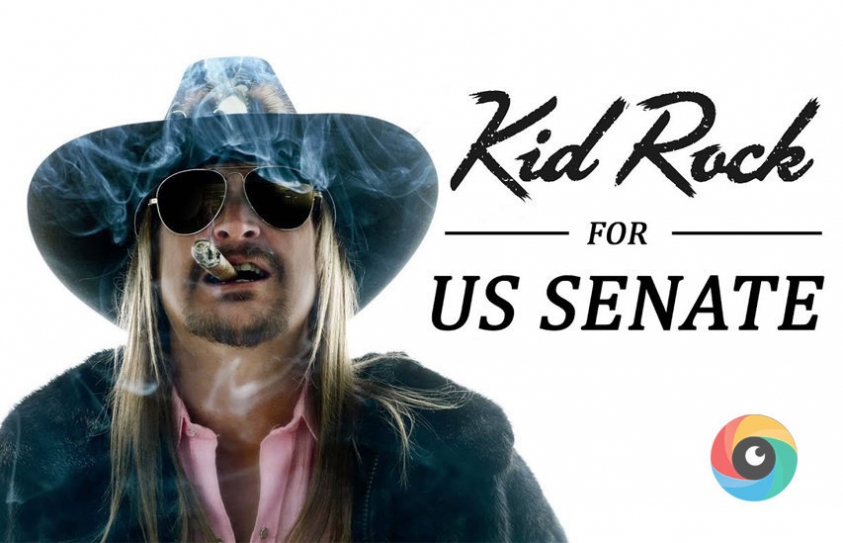 Kid Rock for US Senate?

Is this a joke or some sort of publicity stunt? Is something most people will question when they hear of musician Robert James Ritchie aka ‘Kid Rock’ announcing his decision to run for senate in 2018, in his home state of Michigan. He released this statement on his website kidrock.com on Wednesday, leaving his fans as well as political junkies guessing whether this could actually be a reality, although a formal announcement is expected in the coming weeks. Interestingly, the reaction of people was somewhat similar to when Donald Trump announced his decision to run for presidency whilst riding down the elevator at Trump Tower. However, Trump’s victory even after his past vulgar comments boasting about forcibly grabbing a women’s genitals in an “Access Hollywood” sound clip with former NBC host Billy Bush did the rounds, proves nothing is impossible and that the prospect of a Rock candidacy cannot be dismissed.

As per the statement released on his website, the rocker expressed his desire to start an initiative to create a “non-profit organization for the promotion of voter registration.”

“As part of the excitement surrounding this possible campaign, I decided to take a hard look to see if there was real support for me as a candidate and my message or if it was just because it was a fresh new news story,” Rock said. “The one thing I've seen over and over is that although people are unhappy with the government, too few are even registered to vote or do anything about it.” Rock has also added that he will be holding a press conference in about six weeks “to address this issue amongst others, and if I decide to throw my hat in the ring for US Senate, believe me … it’s game on m**********s.”

Despite his salacious past, offensive language and a sex, drugs and rock n roll lifestyle some might say that he has shown an inclination towards public policy making in the past, and has been actively supporting the blue collared folk in his community for various issues. He was also known to actively support Mitt Romney in the 2012 Michigan primary and did so after grilling Romney with a list of policy questions at his Detroit home.

To get an idea of Rock’s views, here are some of the rockers political statements over the years.

On congressional gridlock: “Somebody’s just gotta smack the f**k out of Congress and get them to start working together, and put this bullshit aside and get this country back on track.” – Interview with Billboard, Nov. 5, 2012

On drug policy: “I don’t smoke much weed, it makes me dumb. But they should legalize and tax everything: pot, cocaine, heroin.” – The Guardian, Jan. 3, 2015

On the American Dream: “Sometimes I shake a finger at those Baby Boomers. You know, I wonder if they did some damage there.” – CNN interview with Piers Morgan, March 10, 2011

On his political ideology: “I don’t like the hardcore views on either side. … I’d probably be more libertarian, but I’m a firm believer you have to pick a side. I can’t be playing the middle.” – Rolling Stone, April 10, 2013

On political correctness: “[Rap-rock] turned into a lot of bullshit and it turned out to be pretty gay… If someone says you can’t say ‘gay’ like that, you tell them to go f**k themselves. You’re not going to get anything politically correct out of me.” – The Guardian, Jan. 3, 2015

On Barack Obama: “I didn’t agree with [Obama’s] policies, but there was an exciting sense of change in the air. That promise hasn’t been fulfilled – the country is more divided than ever.” –The Guardian, Jan. 3, 2015

On Donald Trump: “Has that much f**king changed when anyone’s in office, whether it’s been a Republican or a Democrat in office, in our lifetime, anyway? I haven’t really seen this big, like, f**king change … let the m********king business guy run it like a f**king business. And his campaign has been entertaining as shit.” – Rolling Stone, Feb. 1, 2016

On Iraq: “Saddam Hussein was a bad, bad man and he needed to be taken out. Now I believe we probably could have taken him out a little bit better than, you know, devastating his country and going in and doing what we did. But what do I know? I sing rock and roll songs.” – CNN interview with Piers Morgan, March 10, 2011

In a rather shocking co-incidence, the music video for his 2001 single, “You Never Met a M*********r Quite Like Me”, shows Rock opening a newspaper with a bold front page headline: “KID ROCK NEGOTIATES PEACE AGREEMENT”, then tossing it aside with a smirk on his face. Whether or not this scene turns out to be a reality someday is something we’d have to wait and watch.