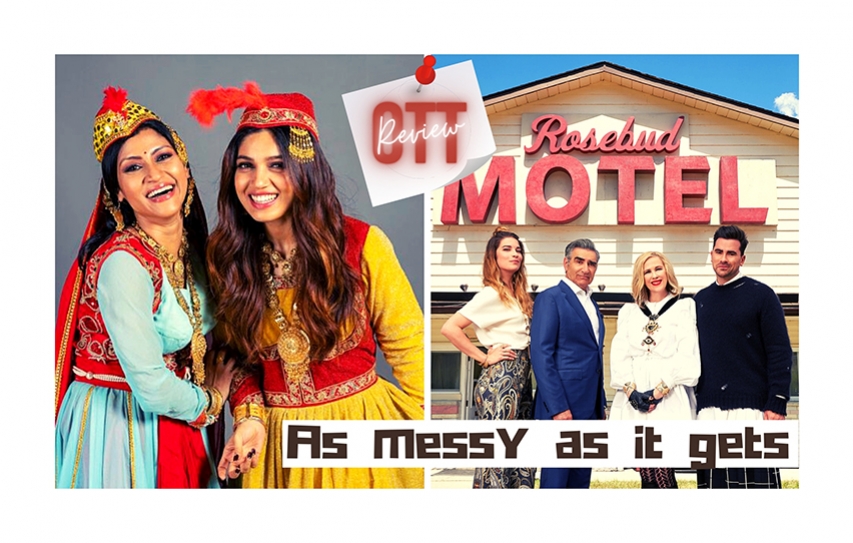 Blood-freezing screams, hysteria which will go down in the annals of the history of  India’s TV channels, accusations-refutations, panelists on the show looking as if they’ve been collectively bulldozed but still dither to edge in half a word, Tsk tsk, the volume knobs are just not working though for the dear speechless invited commentators.

For crying out loud, I must have been out of my senses to switch on a prime-time news show on the inflammable subject of Suicide or Murder, now diverted to Bollywood Dirt (read Drugs).

Yeah, so that was a mistake, which I feel like slapping myself a dozen times over. Fresh resolution of the day: never watch news. Stick strictly to the streaming channels, even if their content is getting thinner than a toothpick.

Trouble ahead: Striving to catch up with the desi content, is self-defeating. Hence, mix-and-match, kabhi India, kabhie global. That’s the way to go, never mind the overload of cheap sex flicks (enough is enough, Balaji Telefilms), those wearisome terrorist dramas set in snowy locales,  gun-brandishing goons in the northern badlands  and  comedies-vomedies too, which make you burst spontaneously into tears.

Be that as it may be, OTT is where it is sort of. Over then to the lugubriously titled… 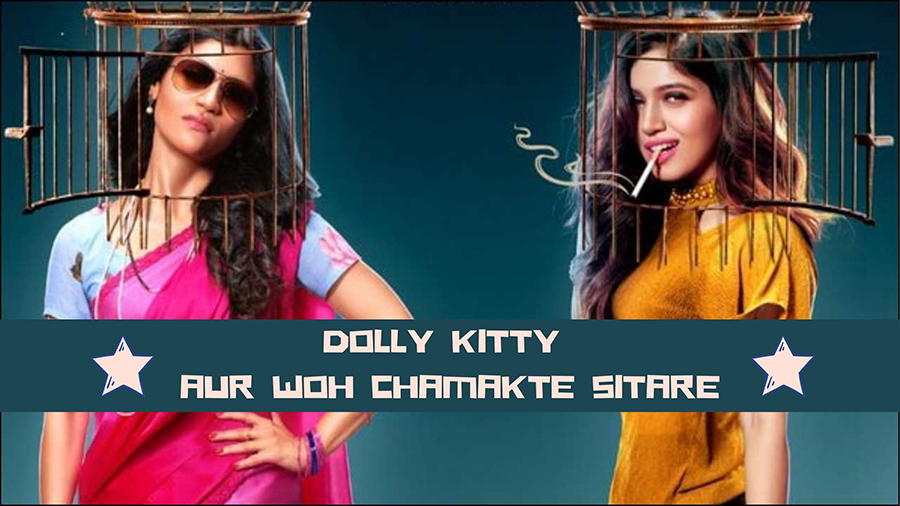 Ouch grouch, when the camera moves in for a close-up of a vanilla white bed-sheet splattered with tomato-red blood - after Miss Kitty spends a torrid night (or was it noon?) with a foxy guy in sheep’s clothing - you can sense that writer-director Alankrita Shrivastava has just lost the art of subtlety.

Drat, such a pity that, because her first feature Lipstick Under My Burkha, four years ago, was so progressive, seamlessly narrated and invoked your empathy right away for its assortment of women who resolve to overcome years of male subjugation. Terrific!

Now the producer of Dolly Kitty Aur Blah Blah happens to be none other than Balaji Telefilms. If there were creative differences behind-the-scenes with Alankrita Shrivastava, that’s none of my business of course. The proof is right there in the tasteless pudding served to you on a Greater Noida plate, where all and sundry appear to be losing the plot pourri.

Incidentally, Dolly (Konkona Sen Sharma) and Kitty (Bhumi Pednekar), have other names: Radha and Kajal respectively. Why the nicknames, go configure. Anyway, jaane bhi do yaaron. Kitty has freshly arrived from somewhere in Bihar (did I hear Darbhanga?) to visit her ‘cousin sister’ Dolly in Greater Noida and forge her own identity. Should be doable but hey, no way. Dolly’s machoish husband gets touchy-feely with Kitty dear, and she skedaddles from their cramped home faster than a speeding autorickshaw.

Meanwhile, Machoish Pati Parmeshwar keeps sauntering into the toilet to jab his smartphone for some titillating action. What a mess, really! Biwi Dolly even announces, “I’m frigid.” And one of their knee-high sons is showing strong signs of turning into a cross-dressing gay. Hey, now that part of the screechplay is so sketchy that you’re not quite sure why that adorable little child star was shown trying on a tomato-red (again) brassiere. Eeesh.

Where is this 120-minuter heading to? Geographically, there are trips to New Delhi and Agra for some fresh air and that’s it. By now, Kitty works in a sleazy call centre, gets deeply involved with that Mr Foxy and is heckled by a moral brigade mob carrying placards. And huh, the mob vanishes, suddenly, as if the budget for junior artistes had run dry.

As for apni Biwi Dolly, she gets into a tango with a Muslim pizza delivery boy who actually owns a cool car to take her out for a romantic date. Never too late. Dolly and Pizza make love, after which the poor rich boy is killed. Khalaaaas! She does visit his grave to express her regrets. Thoughtful of her.

Just trying to synopsise the tangled tale has made me turn pale. Just the way I did when Hello Dolly meets with her estranged mother, frowns majorly, badmouths her and tells her shooo, go away take a walk on the wild side. Woe betide.

In fact, none of the characters is remotely believable, except for a free-spirited saheli type who does exactly what she wants to, whether it’s hooking up with men or relishing a breezy ride in a weirdo DJ’s colourfully sloganed car. This ‘real’ person is portrayed excellently, ever so casually by the wonderful Kubra Sait, even though her role is Thumbelina-sized.

Unarguably Konkona Sen Sharma  and Bhumi Pednekar  are super-competent actresses. Alas, not so here. At best, they’re passable, walking-talking through their gazillion perils, darting facial expressions, which carrom between insufferable agony and  euphoric ecstasy - surely, they deserved better. And so did the usually reliable Vikrant Massey as the Foxy One, the gifted Amol Parashar as the Pizzawallah and Neelima Azmi as the mum told to go fly a kite. Fright.

Why the two star rating instead of one, then? Simply because Alankrita Shrivastava may have botched up this time around. Yet, more female-centric stories need to be narrated, even if the quality just about makes it to the average grade. Or we’ll be left with are only those snowy terrorists, gun-toting overlords in the hinterlands,  creepy cops, crawly baddies and tear-inducing comedies. And now don’t you even dare to remind of me those screamfests on the news tonight. Enough endured. 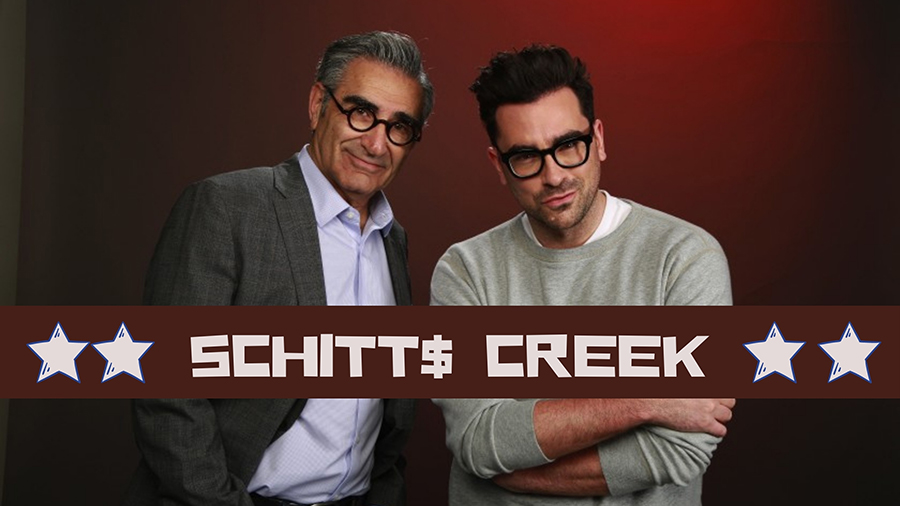 This Canadian marathon series of 80 episodes just snagged as many as seven top Primetime Emmy Awards. And by the way the dollar sign in the title isn’t a typo.

Somewhat wary of sitcoms, okay I said let’s try this one - about a snooty family who lose their fame-‘n’-fortune because of their wily business manager. Next: the family has to relocate to a backwoods township, which they had bought once as a lark. Shifting into a greasy hotel there, the dandyish father, the overwrought mother, their lad-di-dah-dumb son and a texting addict daughter, can’t adjust to the lowlife and almost end up slitting one another’s throats out of sheer frustration. Ha ha ha? It actually is.

Created by the father-son team of Eugene and Dan Levy, who enact their real-life roles, they are a riot, dripping vitriolic sarcasm galore. I’ve checked out the first season of Schitt$, which offers guffaws and giggles unlimited. So go ahead, and make your day. Seriously.