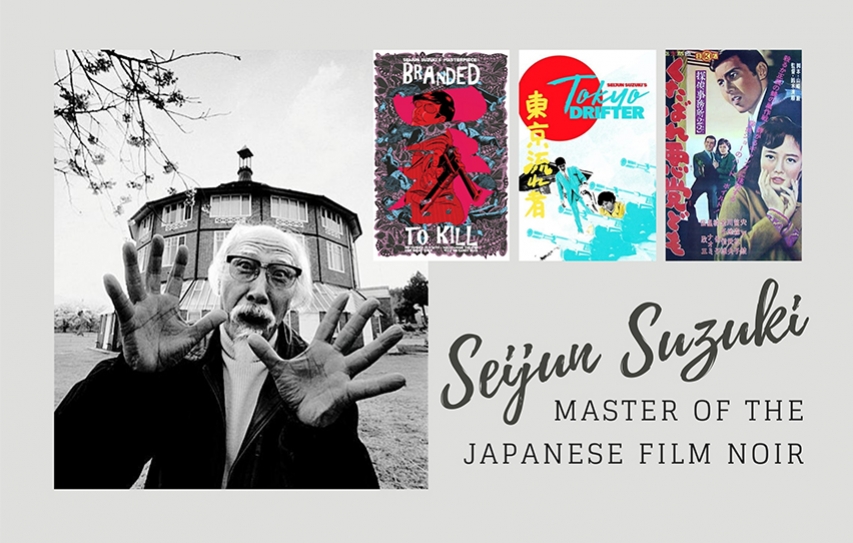 The most traveled and hence the most influential of the film genres that evolved in Hollywood film studios is perhaps the film noir, writes Monish Das

The low‐budget, quickly shot films with chiaroscuro lighting patterns directed by Fritz Lang, Robert Siodmak, Phil Karlson, Edgar Ulmer and others captured the cynical attitudes and shadowy sexuality filled landscape of post‐WWII America of the 1940’s and 1950’s. By the 1960’s the young guns of the French New Wave like Jean‐Luc Godard and Claude Chabrol self‐referentially deconstructed the genre. Other French directors like Jean‐Pierre Melville and Henri Vertuil adopted the codes of the genre adding a dose of cool jazz‐filled glamour and existential anguish and loneliness, which is typically European.

Japanese cinema, despite its innate difference in mise‐en‐scene and narrative style, too was not immune to the dark charms of the film noir. Akira Kurosawa’s crime thriller Stray Dog (1949) and his later films like The Bad Sleep Well (1960), and High and Low (1963), display all the classic features of the noir genre. But the true flowering of film noir as genre in Japan was ushered in by a younger bunch of filmmakers and in the films particularly produced under the banner of the Nikkatsu Studios, which can be considered to be Japanese counterpart of RKO and Warner Brothers.

Nikkatsu Studios produced a series of low‐budget films, which combined the world of Japan’s traditional yakuza gangsters with the angst ridden and morally dubious world of the classic film noirs. Unlike the ninkyo eiga (chivalrous yakuza films) produced by its competitor Toei Studios, which underscored traditional social values by depicting a hero submitting to authority, the protagonists in the ‘Nikkatsu Action’ films did not display loyalty to a group such as family, gang or company. Instead, they were entirely individualistic loners, very similar to the protagonists of the classic American film noirs. In their depictions of lone outlaws that existed outside of the confinements of traditional Japanese society, the Nikkatsu films constituted a rebellion dressed in the trappings of American film noir against traditions of an older, more conformist Japan. The Japanese noir films were thus in many ways representative of Japanese society opening‐up and becoming more inclusive to external influences post‐WWII. These films also portrayed the essence of the alienated youth of post‐WWII Japan.

The most significant of the directors working under the banner Nikkatsu Studios was Seijun Suzuki. Suzuki took the genre to the next level with his idiosyncratic and highly personalized filmmaking style, which combined the generic conventions with a dose of kinky violence and eroticism, which is peculiar to and specifically Japanese in nature.

Suzuki’s first major film Underworld Beauty (1958) is about a group of Yakuza gangsters trying to recover a set of diamonds from the stomach of a dead guy. The film is infused with a sense of black comedy and irony and its schematic B&W cinematography and has enough indications of his unique personal vision of cinema, which would come to the fore more overtly in his later films. His next film Take Aim At The Police Van (1960), starring Michitaro Mizushima, as the guard on a police van who goes hunting for the sharpshooter responsible for killing two of his prisoners, is a hard‐boiled cops and gangster drama with shades of Phil Karlson’s Kansas City Confidential (1952) and 99 River Street (1953). 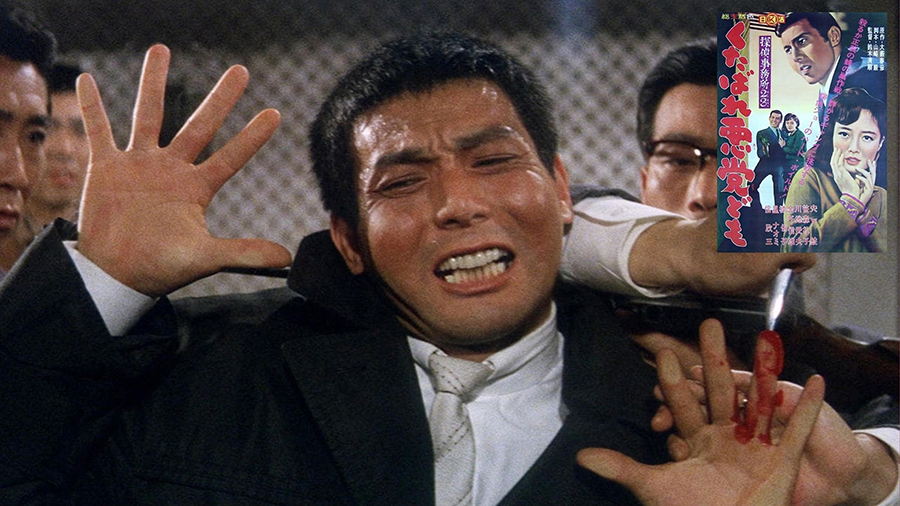 Suzuki found his métier as a filmmaker in Youth Of The Beast (1963), a film starring Jo Shishido aka ‘Jo the Ace’ – the iconic face of Japanese noir films – in which Shishido plays an ex‐cop who assumes the role of a gun‐for‐hire and makes his way into two rival yakuza gangs and then turns them against each other in order to investigate the death of a cop which is purported to be a case of suicide. The narrative may be generic incorporating the major tropes of the film noir – the angst ridden protagonist, double‐crossing games and of course the femme fatale ‐ but Suzuki is able to take the film to an altered level through his highly stylized mix of B&W and color cinematography, imaginative and innovative editing techniques and sound design, which carry his personal stamp.

Tokyo Drifter (1966) – a film that has assumed cult status – is often considered to be Suzuki’s masterpiece. Part gangster film, part noir, part musical, part drug trip; the film is about an ace yakuza hitman – ‘Phoenix’ Tetsu ‐ who tries to turn legit but is forced to go on the run when some old enemies try to kill him. A combination of stylized violence, trippy color schemes and set designs along with a heavy dosage of sentimentality, the film is riot of aesthetic overdose which created ripples in the generally placid waters of the Japanese film industry for which Suzuki received a stern warning from his bosses at Nikkatsu Studios to tamper his exuberance. 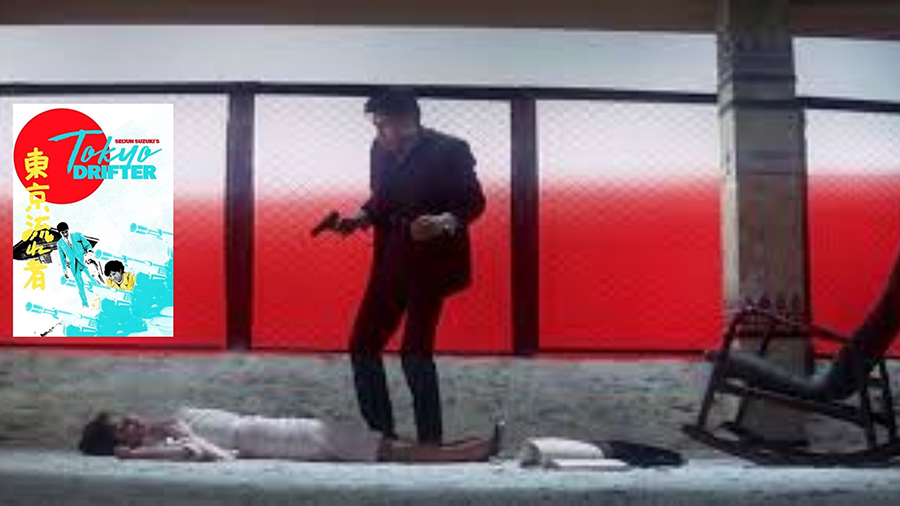 Despite the warning from Nikkatsu, Suzuki went overboard with his next film Branded To Kill (1967), in which teamed up with Jo Shishido once again. The film is about the steamed rice sniffing ‘Numbah 3’ yakuza gunman, Goro Hanada, who botches up an almost impossible assassination and is chased by his bosses and the mysterious ‘Numbah 1’ yakuza gunman for retribution. The film’s fractured; splintered narrative structure is amplified by an editing style that often abjures continuity in favor of abstract jumps in time and space (an influence of the French New Wave). The film is full of cool car chases, bravura action set‐pieces, self‐conscious genre clichés, gratuitous nudity and violence and touches of eccentricity like a butterfly landing on ‘Numbah 3’s’ sniper rifle at the crucial moment thus botching his assassination attempt.

The film is notable for one major deviation from the conventions of classic film noirs. Generically, the wife/girlfriend/fiancée of the noir hero is de‐sexualized woman who represents the figure of domesticity. In ‘Branded to Kill’, the protagonists’ wife is a sexual predator while the femme fatale is a kind of serene ghost‐like sensual figure reminiscent of Mizoguchi’s ghosts. The climax of the film, which is a shootout between Shishodo’s ‘Numbah 3’ character and the elusive ‘Numbah 1’ for the top spot, is a bravura action piece set in a dimly lit boxing hall in which faithful to the generic convention the protagonist wins a pyrrhic battle. 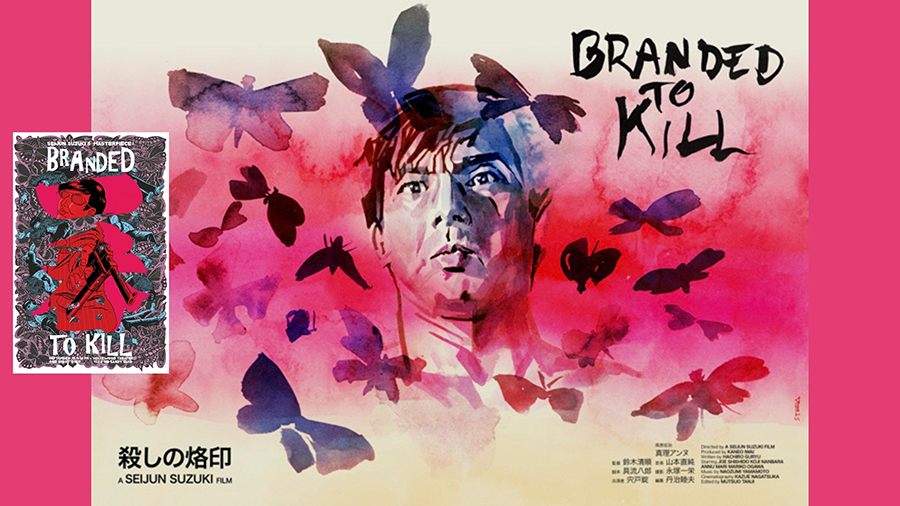 The satirical, anarchic storyline and visually experimental nature of ‘Branded To Kill’ made it a huge commercial flop and brought the already factitious relationship between Suzuki and his producers at Nikkatsu to a tipping point. Nikkatsu promptly fired him.

Suzuki, with support from avant‐garde student cine enthusiasts and film societies filed a lawsuit against Nikkatsu. The long drawn legal battle resulted in the collapse of Nikkatsu Studios. Suzuki’s infamy as the enfant terrible of the Japanese film industry led him to be banned from making films around ten years or so. Ironically, this ban firmly established his cult status as a filmmaker and Branded To Kill as his most enigmatic yet influential films – a film acknowledged by Quentin Tarantino, John Woo and Chan‐wook Park.

Jim Jarmusch ranked it as his favorite hit man film alongside Jean‐Pierre Melville’s Le Samourai (1967). Thanking Suzuki in its credit titles, Jarmusch imitated the scene from Branded To Kill in which the assassin kills a victim by shooting up a sink drain in his film Ghost Dog: The Way of the Samurai (1999).

Suzuki’s films, and in particular Branded To Kill, also had considerable impact on Wong Kar‐wai’s Fallen Angels (1995) and another of Hong Kong’s famous filmmakers Johnnie To’s Fulltime Killer (2001), both of which have a quirky, loner hit man as the protagonist. Takeshi Kitano’s goofy neo‐noir spoof Getting Any? (1995), has the battle between the ‘Numbah 3’ and the ‘Numbah 1’ as its main storyline.

During the period he was practically barred from making films, Suzuki directed a couple of episodes of a TV serial and made a low budget indie film. His filmmaking career resumed in 1977 with a Tale of Sorrow (1977). Films like The Fang in the Hole (1979), Zigeunerweisen (1980), Capone Never a Lot (1985), Yumeji (1991), which followed all fall into the category of film‐noir/yakuza gangster genre but they lack the sparkle and freshness of the three films he made in the 1960’s.

In 2001, he made a sequel to Branded To Kill – Pistol Opera where the Goro Hanada character (played by a different actor) works as a consultant/guru to a newbie ‘Numbah 3’ hit man in his battle against the ‘Numbah 1’ assassin. This film, again, provides glimpses of his cinematic genius but on the whole is devoid of the hard‐boiled grittiness and free‐wheeling experimental quality of the original.

One can argue Suzuki, perhaps, lost his mojo, in the second phase of this career at a time when his credentials were well established and he could have the budget and creative freedom as per his wishes. It seems, the battles he fought with the bosses of Nikkatsu Studios were a huge motivating factor in the creative extravaganza that is the hallmark of his major films and sans that factor his works became placid and conventional. Princess Raccoon (2005) was his last film. Suzuki passed away in 2017 at the age of 93.

Seijun Suzuki’s films and the Japanese noir films in general exemplify how cinema as a whole is an ‘universal’ art form – the content, mise‐en‐scene and the associated tropes of particular film genre find roots in different countries with their own set of cultural and cinematic traditions and the outcome is a series of films which follow the conventions of the original genre but with significant variations and experimentations that take the genre to a different level.

Seijun Suzuki is one of the brightest lights of the Japanese New Wave Cinema and is a remarkable example of Japan’s encounter and adaptation of the classic American film noir.