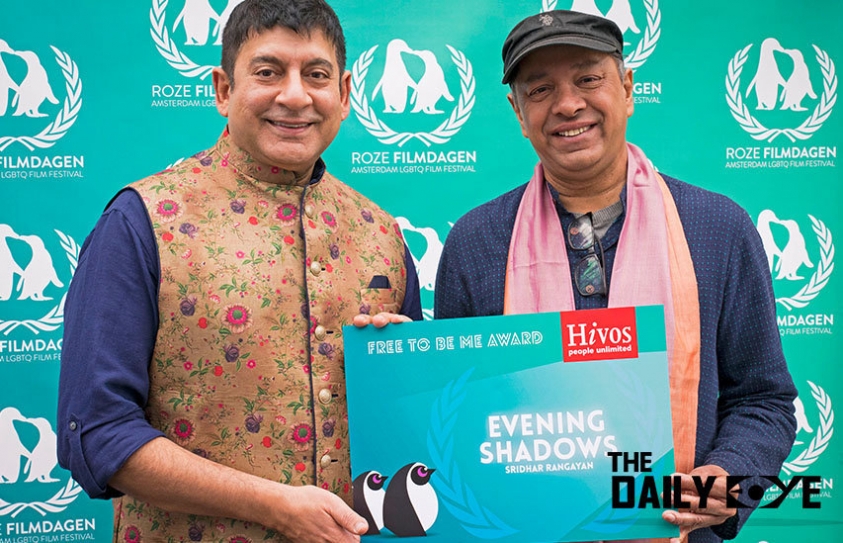 "‘Evening Shadows’ film wins ‘Free to Be Me’ Award "

After sold-out shows at four festivals and winning hearts across four continents, the Indian gay film Evening Shadows by Sridhar Rangayan, has been awarded the prestigious ‘Free to Be Me’ award at the Roze Filmdagen film festival in Amsterdam, with a cash award of Euros 1000 sponsored by Hivos, a Dutch organization that has been a front-runner in supporting innovative and impactful development programs for over 50 years.

The Jury citation for the award reads, “The power of film is that it can tell stories and reach audiences that are otherwise hard to reach. By focusing on the clash of traditions and strict family rituals with the actual human relationships behind them, this movie breaks important boundaries in a country where LGBTQ people still face dire challenges, both legal and cultural.

“As India’s first LGBTQ feature that has an all-age approved rating, it can clear the way for a wider discussion in society on why love should be recognized as beautiful in all diversity, and by telling the story in a relatable and compelling way it can reach out far beyond a limited already-convinced audience.

“That is why EVENING SHADOWS is the deserved winner of this year’s FREE TO BE ME award, granted by HIVOS.”

Rangayan, director of the film, who was in Amsterdam to receive the award said, “I accept this award on behalf of the team of Evening Shadows and the entire Indian LGBTQ filmmaking community. We are all making films under very challenging circumstances, in a country that still criminalizes same-sex love. This award is not only a recognition of our struggles, but hopefully will open doors for a wider dissemination of the film and its important message of acceptance”.

“It’s always encouraging when your work gets acknowledged by others; but when a project where there is a whole community involved, gets acknowledged it’s empowering. Feeling humbled that Evening Shadows won the first ‘Free to Be Me’ Hivos award at Roze Filmdagen, Amsterdam LGBTQ Film Festival. Sincere gratitude to the jury and everyone who believed and backed our film”, said Saagar Gupta, producer, creative director, lyricist and dialogue writer.

“The screening of the European premiere of Evening Shadows in Amsterdam was an incredible experience for me, not just since I was there as a producer but to hear the comments and reactions first hand from an extremely enthusiastic audience.   The icing on the cake was being honored with the prestigious “Free to Be Me” award, which recognizes the risk of undertaking films like Evening Shadows in India. Sridhar is a committed film maker and his work continues to benefit the LGBTI communities and their families in all of South Asia as well as the Indian Diaspora”, said Karim Ladak from Toronto, who is one of the producers of the film having backed the project during its crowdfunding campaign.

Evening Shadows, starring Mona Ambegaonkar, Ananth Mahadevan, Devansh Doshi and Arpit Chaudhary had its World Premiere in Sydney at the Queer Screen Mardi Gras Film Festival, and was one of the runner-up for Audience Awards.

The film had its Indian Premiere at the state-government run Bengaluru International Film Festival where a houseful audience appreciated the film, which has been shot primarily in Karnataka.

The film had its European Premiere in Amsterdam at the Roze Filmdagen film festival on March 10th and also on the same day at Outfest Fusion in Los Angeles.