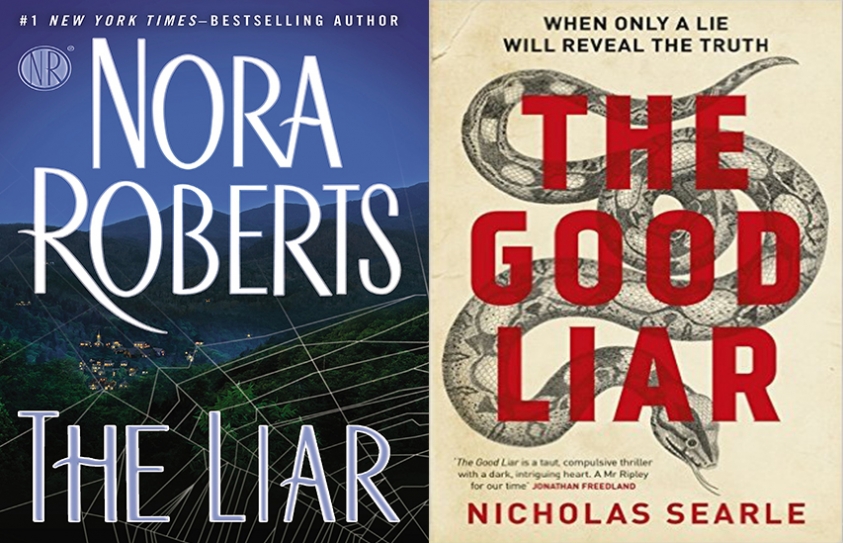 Liars come in all shapes and sizes, what happens to the people they deceive?

Two books about liars, one in which a young woman is cheated by her husband, the other in which an elderly woman encounters an expert swindler. It's no spoiler to reveal that the women are not passive pushovers-- they fight back and win.

As a teenager Shelby had abandoned her family to run off with a rich, and sophisticated older man. A couple of years after the birth of her daughter Callie, she is left a widow, when her husband Richard is killed in a boating accident. She finds herself loaded with debt, and as she struggles to piece her life together all by herself, she finds her married life was one big lie. Everything Richard told her was untrue—even the fancy diamond engagement ring was fake.

She sells everything she can and heads home to her family in the picturesque small town of Rendezvous Ridge in Tennessee. She is welcomed back without any rancor and starts working in her grandmother’s beauty salon. She is forgiven by her best friend and she also finds true love in Griff, who is a partner in a local construction company.

As much as she tries to put her past behind her and heal in the midst of her loving family, Richard’s deceit follows her around. It is not difficult to guess who the villain is, and how it will all end, but The Liar is a readable, if only for Roberts’s descriptions of town life and landscapes and Shelby’s courage in a situation no woman should have to go through. Of course, there is a handsome hero around most willing to help, but she does her own fighting. The one big irritant is precocious Callie, who at three is as flirtatious as a teen--her behavior with Griff borders on disturbing.

The word ‘old’ is used to describe anyone over 60, but the octogenarian protagonists of Nicholas Searle’s The Good Liar are so delightfully wicked, they could beat people half their age.

At the age when so many seniors are battling loneliness or trying to survive in care homes for senior citizens, the dapper conman Roy Courtnay is planning one last job that will not only give him a jolt or energy, but also enough money to let him retire in peace once and for all.

In flashbacks Searle gives the reader a view of how cleverly and coldly Roy operates, how he has always managed to get away and how easily he changes his identity.

When the book opens, he is going on a blind date with yet another wealthy old widow with the idea of swindling her of her nest egg.  Betty McLeish is beautiful and sophisticated, which adds to her appeal as a potential target-- Roy being fussy about the ‘quality’ of his prey.  Soon, he has moved into her cosy country home, much to the annoyance of her family.

In neat chapters, Searle’s flashbacks give details of Roy’s transformations and operations, right from the World War II to the present when he runs an elaborate con on a bunch of his buddies and then stages his own death. Ruthless though he is, there is something darkly fascinating about his utterly immovable eye on his goal. But Betty has her agenda too, and the deadly chess game of one-upmanship between the two is hugely enjoyable. One can’t but admire Betty for her luck, survival skills and razor sharp brain.

The book has both suspense and humour in large measure, even though at some point one can guess where it’s headed. Still, Roy getting his comeuppance is most satisfying.

The Good Liar is the pseudonymous Nicholas Searle’s first book and the author bio says he “was a civil servant who spent much of his time working on security matters."  A writer as elusive as his leading man.