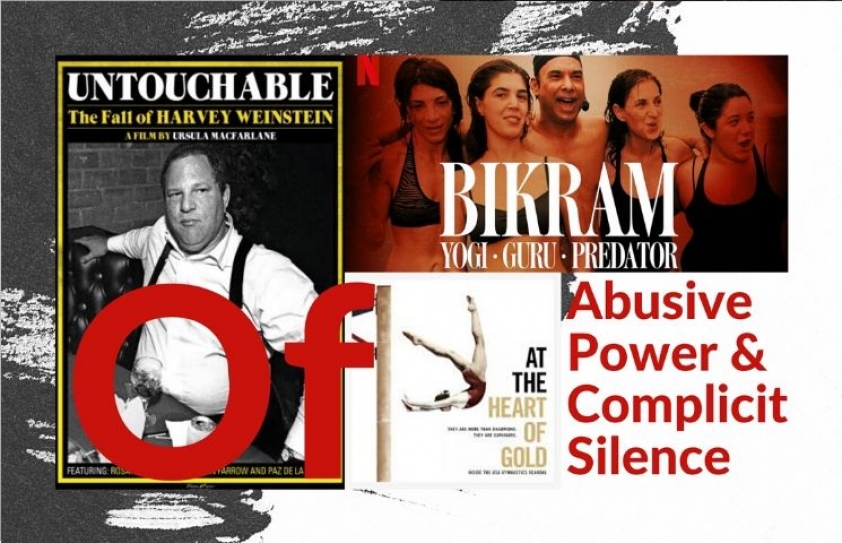 Reema Moudgil walks us through three documentaries streaming right now, which show the ultimate culmination of the Bois Locker Room culture. And what happens when one gender is taught to mistrust its instincts of self-preservation and the other does not even learn something as basic is impulse control.

All three stories have one thing in common; layers upon layers of abusive power and the complicit silence of enablers because one cannot exist without the other.

Two of the men in question are behind bars, hopefully for life while one has escaped the law and is merrily conducting Yoga classes in different parts of the world.

Another thing common to all of these narratives is the negligible interest society has in the female experience of violation and pain. And how little it values their bodies and spirits and how an entrenched system allows predators to not just prey upon them but to get away with it.

At the Heart of Gold: Inside the USA Gymnastics Scandal – Hotstar

This is a 2019 documentary directed by Erin Lee Carr. It narrates how a US team 'doctor' Larry Nassar engaged in sexual abuse for at least 14 years in the guise of providing medical treatment to gymnasts.

A 2019 British documentary about Harvey Weinstein, directed by Ursula Macfarlane. And shows how deep the roots of Weinstein's toxic empire went. So much so that he could hire the world's most expensive investigative agency to put tabs on women who he suspected would open their mouth against him.
Till date, attempts to discredit his accusers and even Ronan Farrow who was among the first writers to break the story, continues.

This film, directed by Eva Orner, is a scandal that again was an open secret but continued to fester till accusations of rape and abuse came tumbling out.

Predatory behavior is normalized in all cultures as a perk of power. It took over three decades to take out one Weinstein. There could be many others like him who still remain untouchable and safe within a complicated matrix of money, privilege and influence.
These stories do offer some hope but also leave behind a lingering hopelessness, a sense of waste. And in each case hundreds of women who will never be the same again. And many others will join them in the future unless it becomes safe to call out abuse and impossible for abusers to sweep away the debris of their victims.