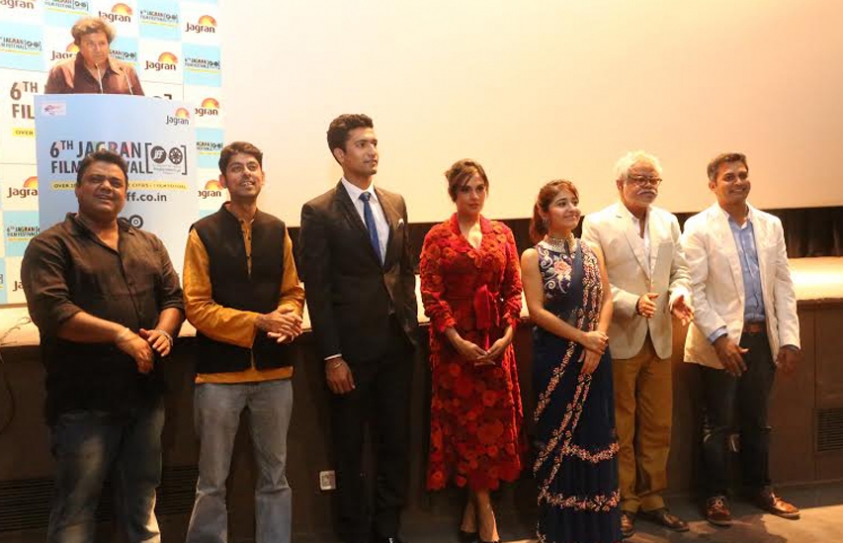 ~ Film lovers, cine gurus and iconic artistes from all over the world converge under one roof at 6th Jagran Film Festival, Day 1 ~

Delhi, July 01, 2015: It is the film fever that’s gripping Delhi over the next 5 days. Film lovers from across India rushed to Delhi to witness Day 1 of the much awaited 6th Jagran Film Festival in its magnanimous avatar at the Siri Fort Auditorium. Marked with an incredible line-up of films, workshops, sessions and interactions, the five-day festival is a must-attend for every cinephile. Opening on a high note with the screening and Indian premiere of Masaan, India’s largest film festival ‘Jagran’ is off to a great start.

The gala screening of Neeraj Ghaywan’s directorial debut Masaan, was attended by cine lovers in the presence of eminent film personalities such as Richa Chadda, Pooja Bhatt, Udit Narayan, Shweta Tripathi among others from the entertainment industry who added to the charm of the much anticipated festival feel. At the grand venue, keeping up the opening day vibe followed Ben Affleck’s American political thriller Argo.

Day 1’s film lineup also offered a glimpse of its bigger than ever form and feel this year. Film enthusiasts were seen tuning in to their choicest films across the three Siri Fort Auditoriums. This year’s opening collection included the 1976 Hindi classic Chitchor; director Satyen Bose’s epic black and white emotional drama Dosti; a superbly presented family love triangle of the 80s, Nadiya Ke Paar; along with director Phani Majumdar’s 1962 women-centric film Aarti, in the Indian Retrospective category. For those who were missing the element of Shakespeare’s stories on such a momentous day, there was Vishal Bhardwaj’s beautiful adaptation of Hamlet, Haider in the Indian Showcase category.

As the official country focus partner of the 6th Jagran Film Festival, the American Centre is screening best in class American cinema at their auditorium. Treading along the American culture of the 90s was Forrest Gump, an epic tale of a mentally challenged man, as the opening film in the Country Focus segment. The movies will be exclusively showcased at “The American Center” Kasturbha Gandhi Marg.

Promising to present some of the finest works of cinematic geniuses, India’s largest film festival, ‘Jagran’, features a notable selection of Indian and world cinema classics and contemporary films. Showcasing more than 100 feature and short films this year, Jagran Film Festival in its 6th edition is slated to be an eyeful treat for one and all.

The 2015 edition of Jagran Film Festival will traverse from Delhi to the Indian hinterlands of Kanpur, Lucknow, Allahabad, Varanasi, Agra, Meerut, Dehradun, Hisar, Ludhiana, Patna, Ranchi, Jamshedpur, Raipur, Indore, and Bhopal before culminating in Mumbai. In close collaboration with festival partners such as Whistling Woods International (WWI), Film Federation of India (FFI) and Motion Picture Dist. Association (India) Pvt. Ltd. (MPDA), the 2015 edition is all set to surpass its own last benchmarks of presenting over 16 cinema appreciation workshops, 400 screenings in 17 cities, that were witnessed by a direct audience of more than 50000 film aficionados and a media reach-out to nearly 50 million people in India in 2014.
The 6th edition of the Jagran Film Festival, Delhi 2015 is scheduled from 1st – 5th July, 2015 at Siri Fort Auditorium, Delhi

About Jagran Film Festival:
Jagran Film Festival (JFF) is an initiative by the Jagran Group towards creating a culture of cinema appreciation. JFF is an honest and sincere attempt by Jagran to spread this culture, and create a platform that connects great content with audiences across the country. The festival screens films across genres, documentaries and world classics apart from student films and ad films. A unique feature of JFF is that the cast and crew of a few select films are invited to a discussion with the audience on various elements of the film. An important aspect of the festival is to generate a discussion on the various aspects of Cinema and its impact on society and popular culture. A series of Panel Discussions will be held with deliberations by eminent personalities from the film industry.