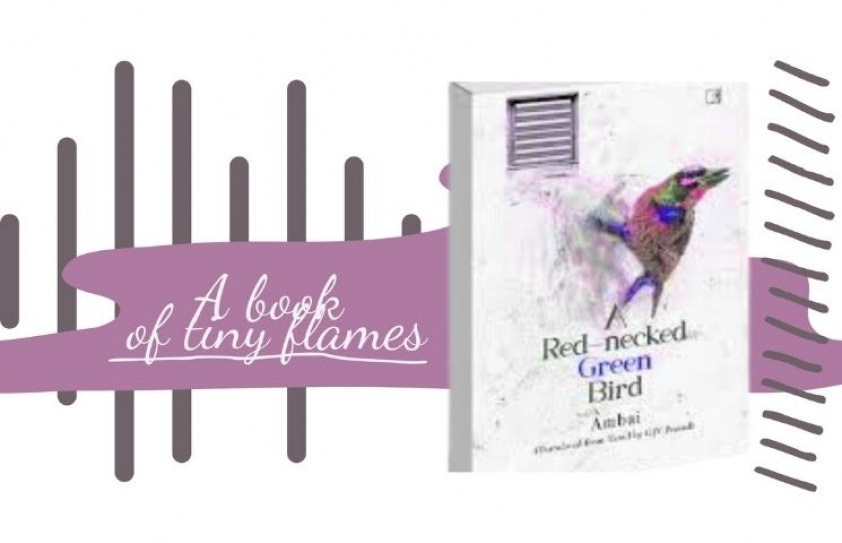 And each flame melting in its own heat, writes Janaky Sreedharan in her review of the book A Red-Necked Green Bird

Perhaps that would be the best way to express my reading experience of A Red-Necked Green Bird, an anthology of stories by the redoubtable C.S. Lakshmi, better known to our literary communities as Ambai. In her sparkling foreword, she speaks of how her tales originally written in Tamil travelled to G.J.V Prasad, himself a poet and translator, to be recast in English. It is a translation that announces the traces of its mother language unabashedly, reveling in the flavors and feel of tamizh wafting through appalams and vadais, relishing the hum of a Dikshitar kriti or the vibrancy of Bharati’s poetry blending into the texture of English in inexplicably beautiful ways.

The prefatory piece by the writer opens a window into the translated avatar of her stories. “The process of translation is like taking a seed from one soil and planting it in another soil. The only way to do it is not to change the quality of the seed but to prepare the soil that receives the seed to soften enough to let the seed take root.”

Still, the writer and the translator reach an understanding that the “original story will always remain a different experience of writing and reading.” True to the spirit of the stories, they are gathered within the folds of a cover, sporting a red-necked green bird and a window. Birds flock to her stories, born out of her sightings through a wide variety of windows - ranging from ‘small fragments’ to ‘large scenes’.

Ambai’s fictional worlds have always fascinated me. They elude the boundaries we have been trained to anticipate in a short story however elastic the form has proved itself to be. They have a knack for beginning their sojourn from a very ordinary moment and gliding into a most extraordinary narrative dance. Desperate, haggard lives in a metro, in a Mumbai street or in a Gurdwara can trigger a rush of memory or expectations, unearthing unhealed hurts and healing friendships. In this anthology of thirteen stories, elegantly produced by Simon and Schuster, the writer works through a spectrum of mental states - unhinged, tranquil, resigned or ecstatic.

They often carry the longings of a migrant tamizh woman in cosmopolitan Indian cities like Delhi and Mumbai. And they wend their ways into the emotional networks across continents as in the interlocked destinies of Luisa, Maria and Nirupama in “Two Empty Chairs”. There is the heaviness and scar of contemporary histories weighing down a Harpreet in ‘1984’ or Urmila Tai in ‘The City that Rises from Ashes’. A sharp and subtle political sensitivity runs through these telling, making them speak truth to power. You revisit those harrowing times with a tremor because the storyteller cannot let us forget. 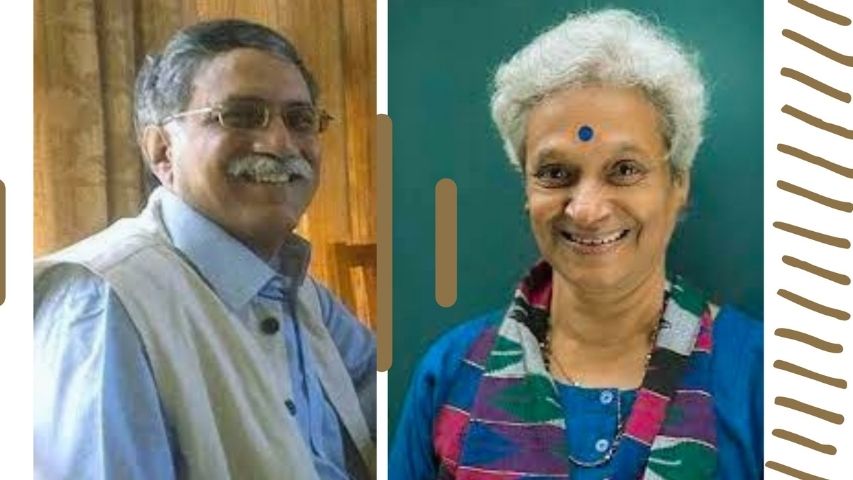 Birds, animals, humans and computers live intertwined lives in a village or a city. The urban creature is wrapped in her recollections of a small-town past. The self-sufficient anonymity and loneliness of a city woman lie buried in remembrances of countless sorrows, separations, sacrifices and wounds. Mostly centered on women narrators, very often past their primes, Ambai’s tales gently slice through their torrid inner lives. Smothered by custom and fatigue, worn and torn by riots, partitions and dislocations, they are women who may be just looking for a peaceful corner to sip a quiet cup of tea or sleep a little without fear. Fantasy and loneliness make interesting bedfellows in ‘The Lion’s Tail’, which like ‘Falling’ heaves with music and pathos. Grief binds these stories in a vine of compassion, and the fragility of the human situation cracks open at every disarming moment.

But then there is always a rare flash of sunshine - memories of joyful bonding punctuating these stories with an ineluctable force of hope. There are epiphany junctures where you let go of a precious relationship in a temple town or encounter the autobiography of one’s own iconoclastic dancer/mother in the cavernous government godowns. In Ambai’s world, every being is precious and sacred. Caught in a web of seismic historical shifts, they are repositories of immense suffering and resilience. And in the interstices of big, ambitious cities Takshaks lie in wait to prey upon their predator. Myth and music blend into the plotlines with such natural ease that one is not surprised by a Purandaradasa composition in Raga Behag or a leaf from Svetasvatara Upanishad floating into a mundane life with fundamental questions. A raga accompanies even a suicidal descent marking the end of a life with uncanny beauty!!!

Philosophical angst segues into the everyday as an inexorable flow of life into death. Renunciation is normal in Ambai’s world and ‘expiry time’ is yet another bend in this endless journey. Erotica in the jumble of obligations and duties is handled with a poise that trusts the body and its many hungers.  “The body has many stories.” It oscillates between desire and desirelessness. ‘Swayamvars with No Bows Broken’ cocks a snook at epic conventions and plays on a middle-aged woman’s acceptance of her solitary longings.

The danger of inhabiting a woman’s body finds its narrative form through a mythopoeic imagination in  ‘The Pond’. In the story ‘The Red-necked Green bird’, which is also the name of the anthology, the reader feels acutely with Vasanthan the pain of a bird whose call is stuck in its throat.

These stories try to release those calls. Strewn with music and birds, peopled by lives at once scattered and bonded, this collection will leave you misty-eyed, reflective and serene even in the midst of all the chaos surrounding its birth. More than anything else, you’ll look out of your windows tomorrow, see the familiar black crow on the plantain leaf and listen to its cawing with a more tender, loving ear!!!