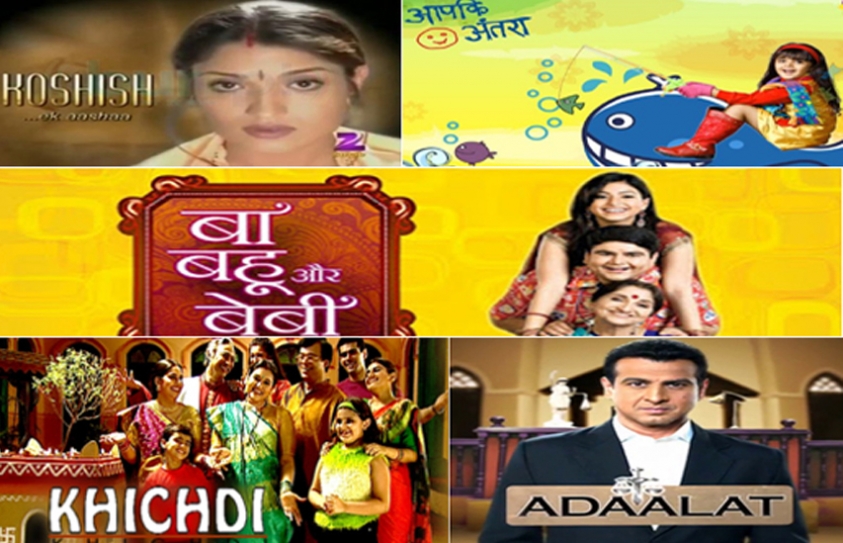 When it comes to portraying a mentally imbalanced person on the screen, and I am referring to television, there is a misconception that any character that has retardation is wild, over the top and evokes laughter in others.  Years ago, a young actor friend did a serial where she was playing an inmate in a mental asylum. Her first take was rejected as she wasn’t loud and in your face, she of course didn’t know what malady had struck her character; she plodded on with takes and retakes, and finally gave the director what he wanted – a loud, raging, disheveled, bewitched performance.

When looks at content which is driven by or includes such characters,   one can barely pick five. A recent episode of a non-fiction show was about a young woman being forced into marrying a man who was mentallychallenged. It reminded me of an early 2000’s Zee TV show Koshish – EkAashaa. So I had my five picks with the latter.

KOSHISH – EK AASHAA earned the RAPA Award for Best Hindi Soap Opera. It was probably Balaji Telefilms’ first big hit with the viewers. A young woman named Kajal is betrayed by her parents-in-law into marrying their mentally challenged son, Neeraj. A victim of circumstances, she faces the turmoil of her challenged husband and a possessive mother-in-law with dignity and patience. The poignant moments with the handicapped husband pulled at heartstrings. Tension lurked in the household with the three brothers-in-law and their wives. While, Neeraj is oblivious to it all, finally trusting Kajal, who has slowly started caring for her husband?

This new, fresh content brought in to focus the very talented Varun Badola. He shot to fame playing Neeraj, where he showcased his ability to play a range of emotions and earned plaudits, for future starring roles; he remains among our finest, yet under-utilized talent.Sandhya Mridul’s performance was appreciated too. KoshishEk Asha was dubbed in Chinese and telecast in China in 2005. We hear that,Sandhya became a household name in China.

But what needs to be noted is that Varun Badola’s performance as a mentally challenged person remains one of the more authentic performances till today.

AAP KI ANTARA is another Zee TV  show.  Antara was born to Anuradha, who had anout- of- wedlock relationship with Aditya. When Anuradha dies in a car accident, Aditya takes her home to his wife Vidya and son Abhishek. The intrusion of Antara is made worse with her condition.She doesn’t behave like a normal child,she cannot express emotions and lives in her own world! To the outside world she is a day dreamer and a slow child. To the neighbours, she is mad and she is shunned from playing with their children. Antara is Autistic. Aditya is faced with the challenge to bring up his special child and get her accepted by society.

Aap Ki Antra sensitively depicted the tribulations of parents of challenged children. Each episode, ended with a reality short of autistic children and their parents. Hence, offering a wonderful support network. The two young actresses, who play Antara must be commended especially ZaynahVastani who was the young Antara, while AnjumFarooki  did a good turn as the older Antara. The only one who is Antara’s friend and staunch support is a neighbor’s son Billoo. The early scenes were   played by Aarav Velhal and later Sandeep Upadhaya. They were among the serial’s most charming scenes.

An Arabic dubbed-version was shown on Zee Alwan  and Aap Ki Antara was renamed as Anhar, the serial’s official Arabic name, and means Rivers in Arabic.

ADAALAT –THE KILLER OF DR. JANJANI

ADAALAT –THE KILLER OF DR. JANJANI episode of Adaalat is a stand out with the eccentric Professor Mithresh Mishra who answered KD Pathak’s questions with riddles in Urdu and Sanskrit or with Mirza Ghalib’spoems. Heis already sentenced to death when he is called in as witness for another case, as his harmonica was found on the murder scene.KD’s aide Varun is the puzzle solver. Professor Mishra, a quirky genius, is a suave, shrewd tactician who plays cat and mouse games with   KD. His menace would entice criminologists with his wily moves, where you can’t prove him guilty. The denouement fatale left viewers stunned –as in onesudden sweep he slashedhis own throat.

This episode didn’t carryjust the trophies of KD Pathak’s probing clues, nor his courtroom histrionics; it had another stronger and more willful contender in the fanatical Professor Mishra so astutely played by Amit Behl. At no point did he resort to over the top histrionics, Behl’s menace lay in his quiet, mocking of Pathak’s probes and shrewd moves to puzzle the ace defense lawyer out of his robes. He could have given a loud voice to his eccentricities with irrational behavior. He left the shocker to the last. It’s been three years on, but this episode of Adalat lingers as a recall.

KHICHDI,primarily a sitcom is widely considered by audiences and television critics to be one of the finest examples of true situation comedy in India. The well etched characters have become almost icons of Indian television, which is otherwise obsessed with family soaps. The reruns have aired on several channels including STAR Utsav and Pogo, and a film version also made it to the big screen.

If it’s sitcom, why is it being mentioned in this list?This laugh riot rests on a few dysfunctional characters in the household of Tulsidas, the patriarch. His eldest son Praful is a dimwit, so is Praful’s wife Hansa, these two along with Hansa’sbrother Himanshuform the family’s trio of stupids.

A widespread mental deficiency is a slow learner and dysfunctional people who are known as dimwits. Some of our sitcoms feature a few such characters. Khichdi includes three extremely well enacted   characters played by Rajeev Mehta, Supriya Pathak and JamnadasMajethia. Their naïve foibles, invoked healthy laughter.

BA BAHOO AUR BABY was a very popular primetime Indian dramedy series. It  centered on the fictitious Thakkar family, living in Parla East, Mumbai. Gattu aka Gopal Thakkar is mentally challenged. The family members, from his older siblings and their wives to his nephews and nieces humour him and appreciate his childishness. His childlike fantasies are encouraged. But to the rank outsider he is perceived as mad.

Society would have deemed Neeraj, Antara, Professor Mishra, Praful-Hansa-Himanshu and Gattu as mad or crazy. But in reality, each of them typifies a mental state which has them be otherwise abled. They need to be cared for too. When television which is such an all-encompassing medium shows an Aap Ki Antara it is actually showcasing those wonderful people who are differently abled, but the same as us.