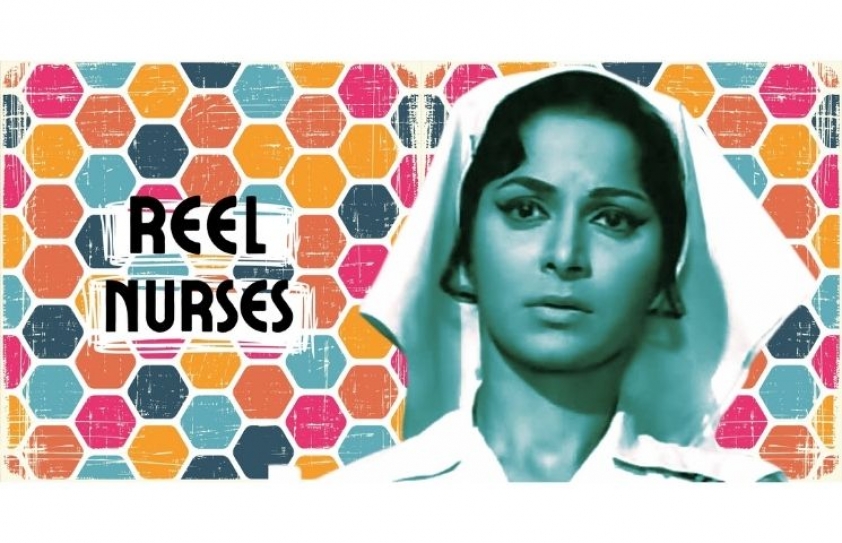 The nursing staff has been working relentlessly throughout the pandemic. They are the wonder women and men, as the world has seen, and saluted for their dedication to saving lives.

Down the decades, Bollywood cinema has paid their homage to nurses, right from Dr. V. Shantaram’s real-life story Dr. Kotnis Ki Amar Kahani (1946), in which the actor-director’s wife, Jayshree, portrayed the Chinese nurse who helps the doctor to heal the injured against the Japanese forces during World War II in China. 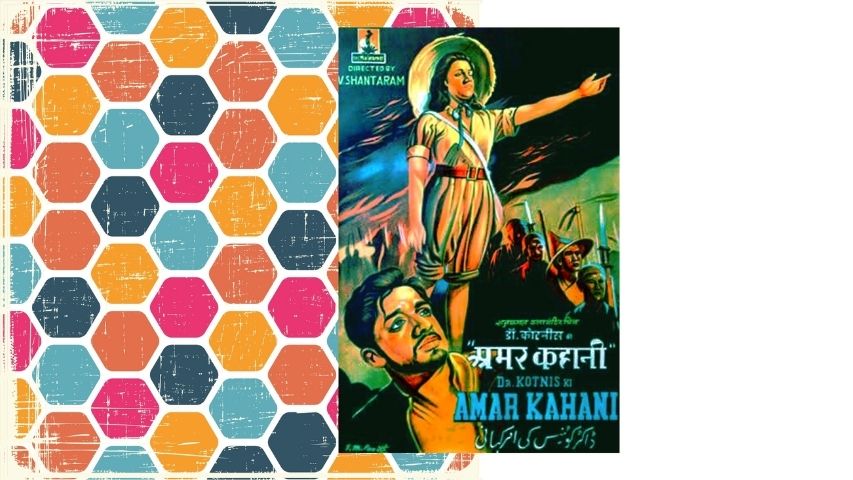 Jayshree’s daughter, Rajshree, played a nurse for a very short duration in the climax of Janwar (1965). Mumtaz wasn’t a nurse in uniform in Khilona (1970), but was depicted nursing back the mentally unstable Sanjeev Kumar back to normalcy. Divya Rana in Andha Yudh (1987), Urmila Bhatt in Ankhiyon ke Jharokon Se (1978) and Rimi Sen in Johnny Gaddar (2007), have also portrayed nurses.

As trivia, you may want to know that Govinda and Harish went drag, dressed up as female nurses in Coolie No: 1 (1995), which was remade in 2020. Giggle or squirm, Varun Dhawan and Sahil Vaid repeated the drag act. 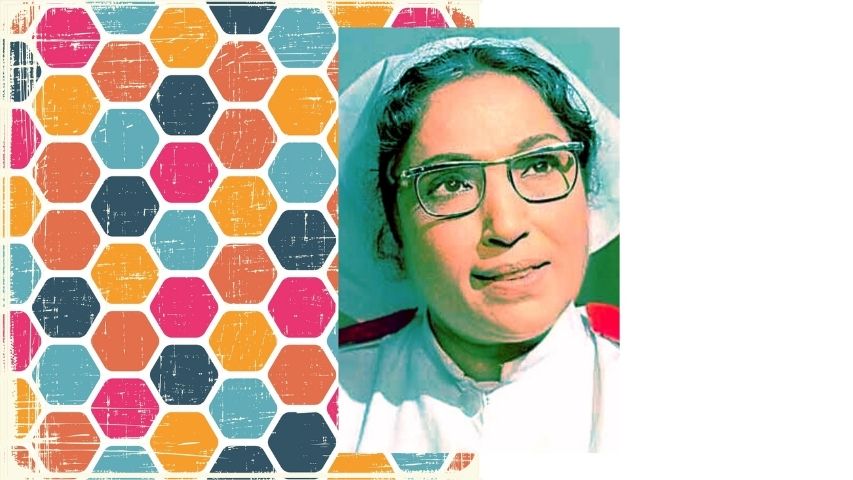 The versatile character actor was Matron D’Sa in Hrishikesh Mukherjee’s Anand (1971), the story of a terminally ill man, said to be inspired by the Japanese master Akira Kurosawa’s Ikiru (1952), who leads his life to the fullest before the inevitable happens. She was the unflappable yet an immensely caring matron as she reprimands Rajesh Khanna who offers to take lodging in her home instead of the hospital.

Along with superstar Rajesh Khanna in the title role, Amitabh Bachchan essayed the role of his friend Dr. Bhaskar Banerjee addressed as Babu Moshai. Others in the cast were Sumita Sanyal, Ramesh and Seema Deo and Durga Khote. Lalita Pawar again essayed the role of a matron in Khamoshi (1970).  Salil Choydhury’s music score - especially the songs Kahin Door Jab Din Dhal Jai and Zidagi Kaisi Hai Paheli - continues to be heard and savored to date. 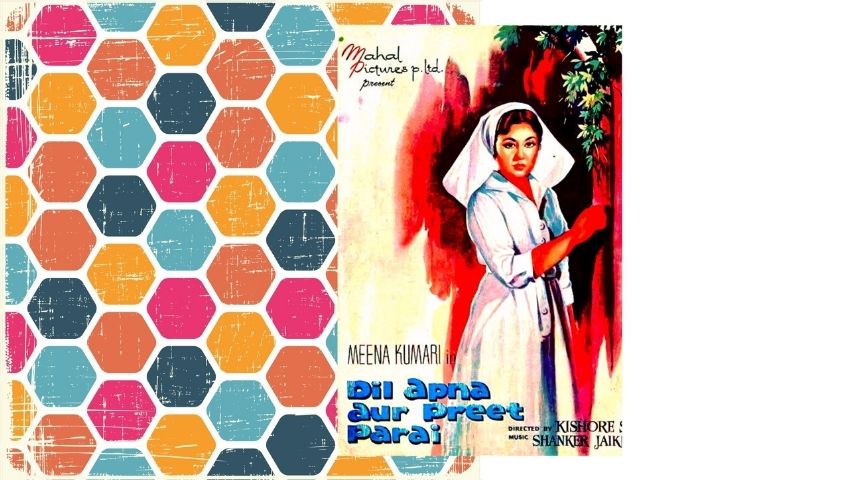 She was nurse Karuna in the memorable Dil Apna Aur Preet Parai (1960) directed by Kishore Sahu. Karuna looks after patients at Malhotra Hospital. She is silently is in love with the resident surgeon Sushil Verma played by Raaj Kumar. He reciprocates her feelings but gets married to Kusum, played by Nadira, leaving Karuna heart broken. Eventually, they realize their love of each other and are united. Meena Kumari was also nominated for the Best Actress Filmfare Award for her nuanced performance. Shankar-Jaikishen’s music score with such imperishable numbers as the title song and Ajeeb Daastan Hai Yeh, contributed immensely to the film’s success. 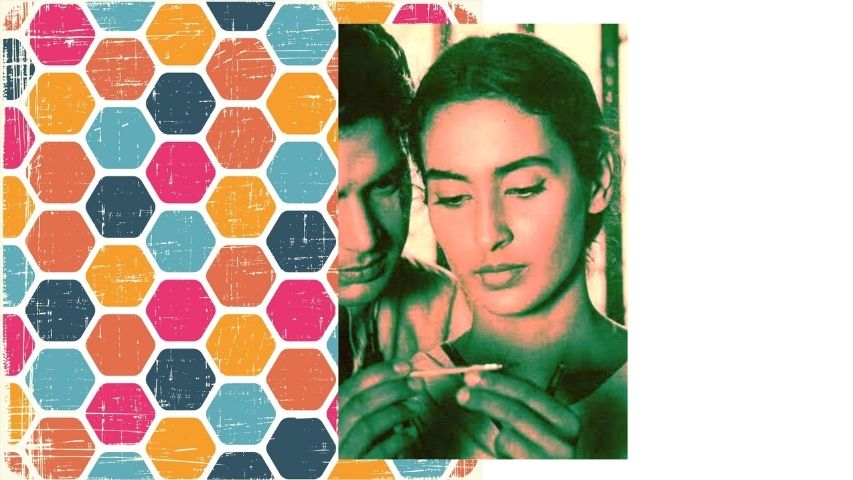 As Kalyani in Bimal Roy’s classic Bandini (1963), she enacted a caregiver of an obnoxious and mentally unstable woman who turns out to be the wife of her former lover Bikash, played by Ashok Kumar. Her miseries don’t end there as she also learns about her father’s accidental death in the city. Construing her patient as the root of all her problems, she confesses to her crime and is imprisoned. In jail, a young doctor, Devendra, played by Dharmendra, is attracted to her.

The stark black-and-white film also became popular for its music by S.D. Burman who play-backed the number Mere Saajan Hai Us Paar, and also marked the debut of Gulzar as a lyricist with the song Mora Gora Aang Laile. Nutan’s performance in Bandini is among one of her best ever. 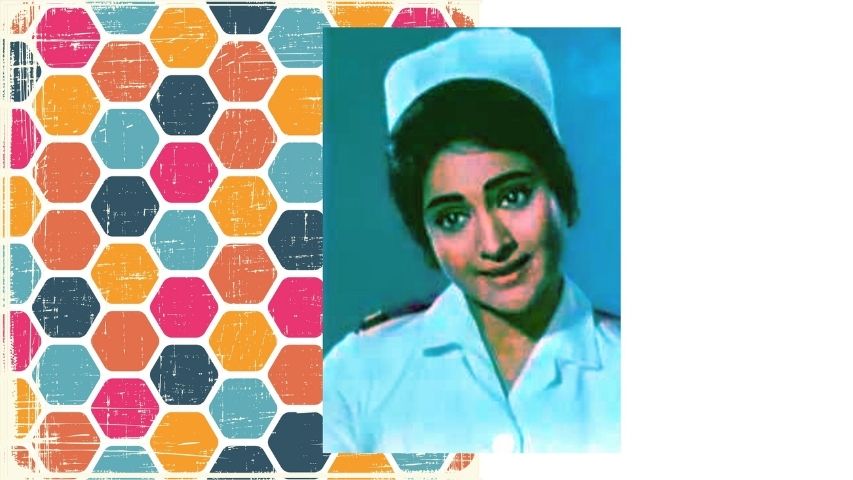 She was nurse Shanti in C.V. Sridhar’s Saathi (1968), co-starring Rajendra Kumar and Simi Garewal. Dr. Ravi returns from America and becomes the chief of a hospital. He meets nurse Shanti and marries her, much to the disappointment of his guardian Kaka who had wanted him to marry his daughter Rajni.

Soon Ravi is knee-deep in work and Shanti who falls ill, doesn’t want to be a “burden” on him and therefore disappears. Believing his wife to be dead, under pressure Ravi marries Rajni but is unable to forget his first wife. He loses his eyesight when his wife re-enters his life again. Vyjayanthimala was also seen as a nurse Madhvi in Madhumati who nurses Dilip Kumar as Anand babu back to health. The same role was essayed by debutant Vanita Goel in her debut-making Janam Janam (1988) opposite Rishi Kapoor. 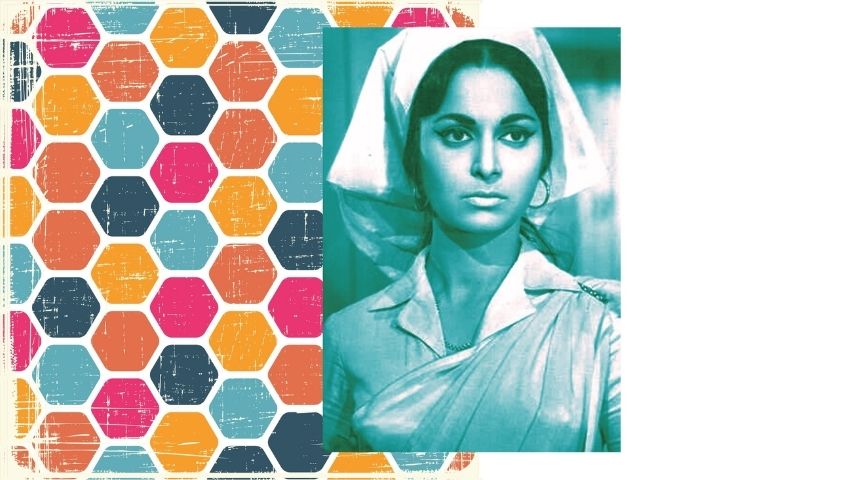 Radha in Asit Sen’s Khamoshi (1970) is one of Waheeda Rehman’s best roles after Guide (1965). She is a dedicated nurse of a mental asylum but can’t help losing her heart to one of the inmates, Dev Kumar, portrayed by Dharmendra. Once his mental equilibrium returns, he returns to the girl he used to love and forgets Radha. Heartbroken Radha resumes work and is assigned to take care of Arun Chaudhary, played by Rajesh Khanna, who falls in love with her. Radha unable to endure heartbreak again ends up as a patient herself, underlining the point that nurses are human and need to be treated sensitively. The supporting cast included Deven Verma, Lalita Pawar, Anwar Hussain and Iftekhar. 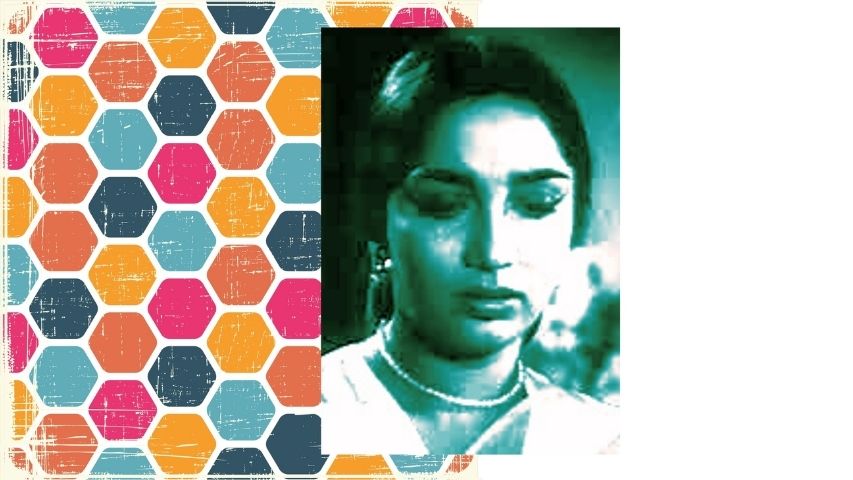 She was Kavita Kapoor in the Bimal Roy-directed Prem Patra, who nurses Arun Kumar Mathur, played by Shashi Kapoor. His marriage is arranged to her distant cousin after misunderstanding with Arun over a love letter. By a twist of fate, Arun loses his eyesight; his fiancée can’t come to take care of him. Hence Kavita does, pretending to be the fiancée. The movie was loosely based on the 1956 Bengali film Sagarika starring Uttam Kumar and Suchitra Sen. 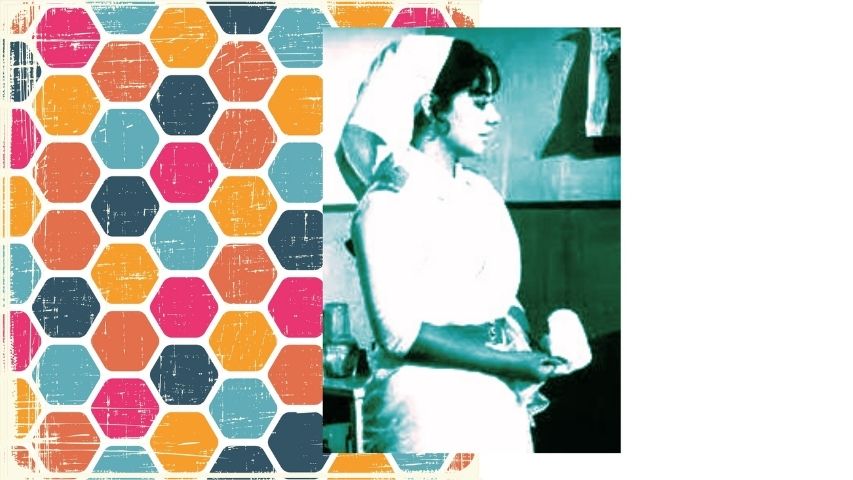 She played the spunky and spirited nurse Radha in Gulzar’s Achanak (1973). She peps up the spirit of patient, Major Ranjeet Khanna, played by Vinod Khanna, who’s on death row. Major Ranjeet soon gets attached to the doctors Dr. Kailash and Dr. Chaudhary played by Asrani and Om Shivpuri respectively and of course Radha who whistles along saying, “Sab ke toh barah bajte hai lekin tumhare to char bajte hain.” Others in the cast included Lily Chakraborty, Iftekhar and Kamal Deep.

Achanak was based on Khwaja Ahmed Abbas’s story The Thirteenth Victim, which had been published in a magazine. The film was partially inspired by the Nanavati case, which was also the inspiration behind Sunil Dutt’s Yeh Raaste Hai Pyar Ke (1963) and Rustom (2016). 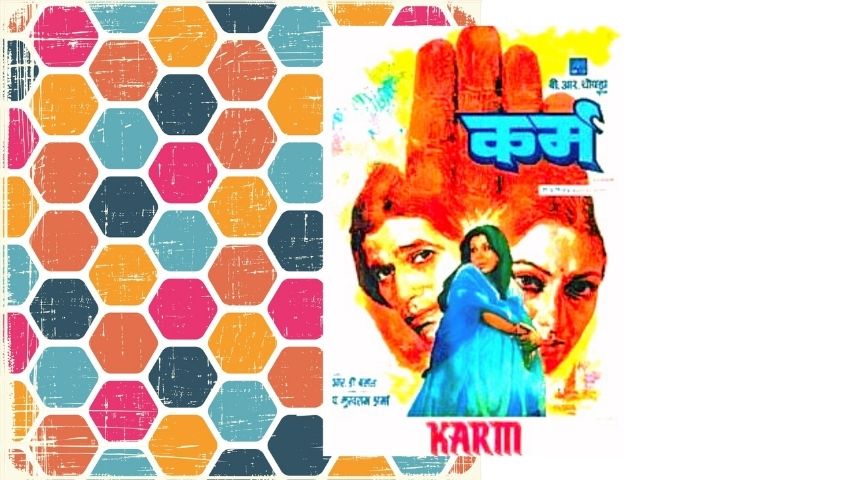 Vidya Sinha was Asha in B.R. Chopra’s Karm (1973), who changes her name to Sadhna when she finds work as a nurse in a local hospital in Dehradun. She lives with her son who accidentally bumps into his father, Arvind, played by Rajesh Khanna, who is already married to Neelam, portrayed by Shabana Azmi. Neelam loses her child during pregnancy and can no longer become a mother.

The nurse faces a difficult situation when she sees her husband and his wife unknowingly drawn towards her son. The plot gets highly dramatic when her husband is brought to the hospital in a critical condition and he accepts her as his wife before the surgery is performed. Karm was a well-made film based on superstitious beliefs, which did well at the ticket counters. The music by R.D. Burman was key-point in its success. 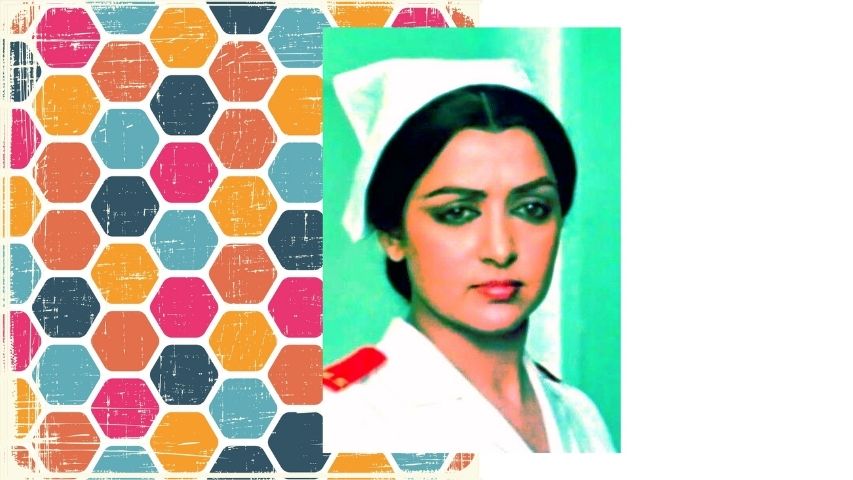 As nurse Indu in Raj N. Sippy’s Satte Pe Satta (1983), inspired by Hollywood’s Seven Brides for Seven Brothers, Hema Malini falls in love with an uneducated orphan Ravi played by Amitabh Bachchan after throwing a watermelon on his head from her balcony. Indu who is very strong about her likes and dislikes is fooled by Ravi who tells her that he has only one younger brother, without mentioning the five others at his large farmhouse. What follows is a riot as Indu trains the ruffian brothers in manners, hygiene, etiquette and dressing. 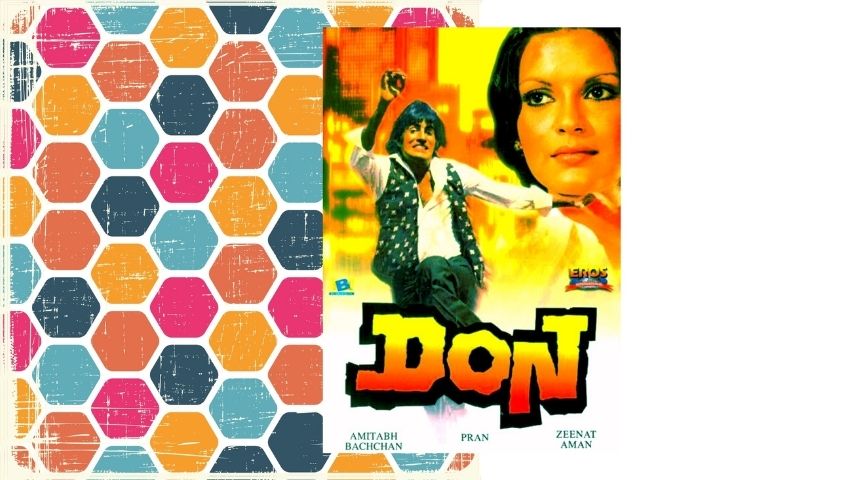 Quite clearly, she was the most glamorous of all the nurses seen in Hindi cinema, even if it was just for one sequence in Chandra Barot’s thriller Don (1978). An important sequence was shot in a hospital with Vijay (Amitabh in a double role) where Zeenat Aman, as Roma, helps him escape the hospital when he is under strict police protection. This scene was actually shot on the sets of another Bachchan film Majboor (1974) at Mehboob Studios. Don was a huge hit and became a franchise with Shah Rukh Khan portraying the eponymous underworld kingpin. 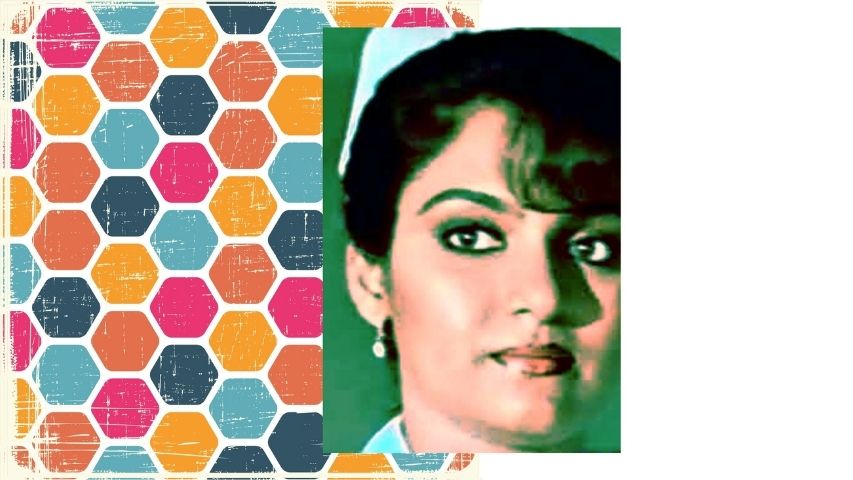 She played nurse Mary Mathews in Agneepath (1990) opposite Amitabh Bachchan as she nurses the underworld kingpin, Vijay Dinanath Chauhan, back to health and sees the more humane side of the don. It was remade in 2012, with Hrithik Roshan stepping into Bachchan’s role by Dharma Productions opposite Priyanka Chopra. 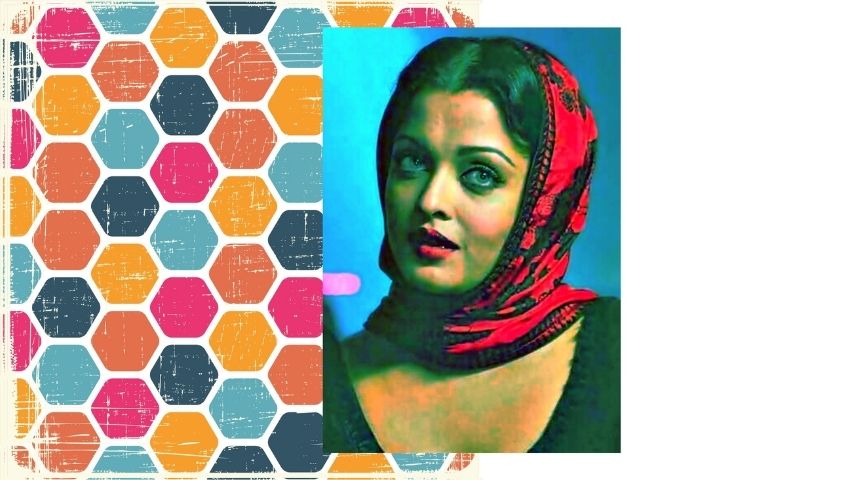 In Sanjay Leela Bhansali’s Guzarish (2001), the Spanish film The Sea Inside inspired it as claimed; she was Sofia D’Souza who nurses Ethan Mascarenhas, a former magician now quadriplegic. He becomes a popular radio jockey of an FM station called Radio Zindagi. He spreads positivity, hope and laughter through his broadcasts. Sofia nurses him for 14 years and finally falls in love with him supporting him unconditionally. Quite exotically costumed for the role of a nurse, her performance was pretty well done.