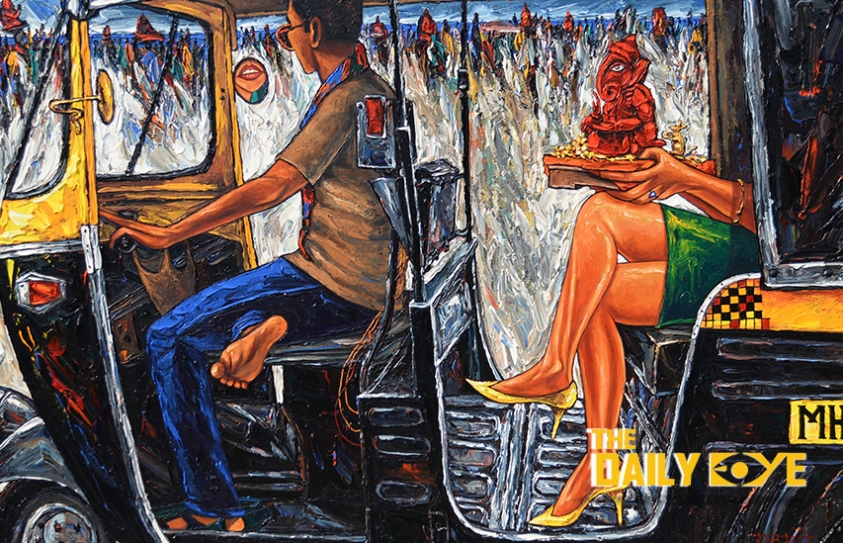 Such a curious Journey: Raj More, from mimicry shows to National Award-winning Artist

His artworks are tongue-in-cheek comments – on subjects ranging from demonetisation and political unrest to the vice-like grip of Bollywood cinema on the youth today.

Circa 2012, Raj More snagged the National Academy Award organised by the Lalit Kala Akademi for his painting titled Oh My God – depicting unchecked urbanisation as reflected in the helmet of a bike rider. 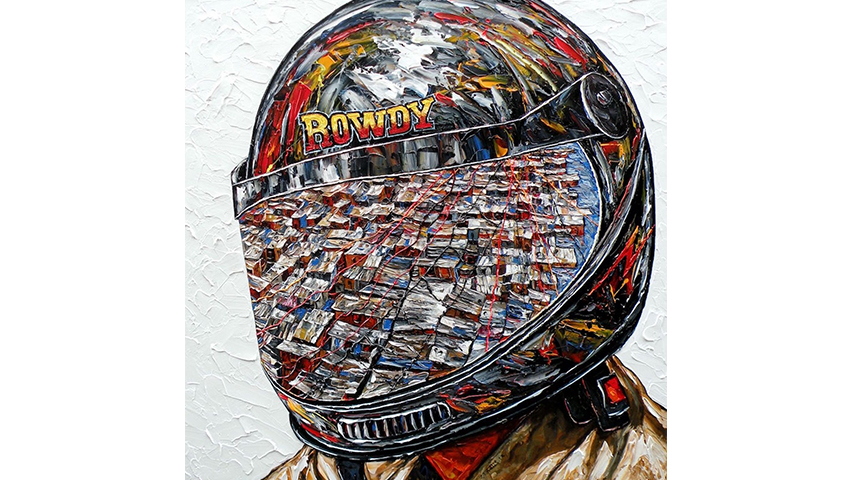 Lately, he has retured from an exhibition in Seoul to Mumbai’s crowded Kandivli neighbourhood, where he lives with his wife and two sons, and paints in an attached studio. His fiercely bold acrylic strokes on canvas with knives and masonry tools, are frequently double the size of the artist who’s a puckish, tousle-haired 5’ 4”.

“Failure is the first step to success,” he philosophises over a soup lunch at a central Mumbai mall, while narrating his Herculean struggle to make it as an artist in an overcrowded market. His first work Mumbai by Night was sold in 1993 for Rs 10,000. Over 15 years later, a single canvas by him fetches over Rs 10 lakhs, a price which he believes he has attained because he’s decidedly different. 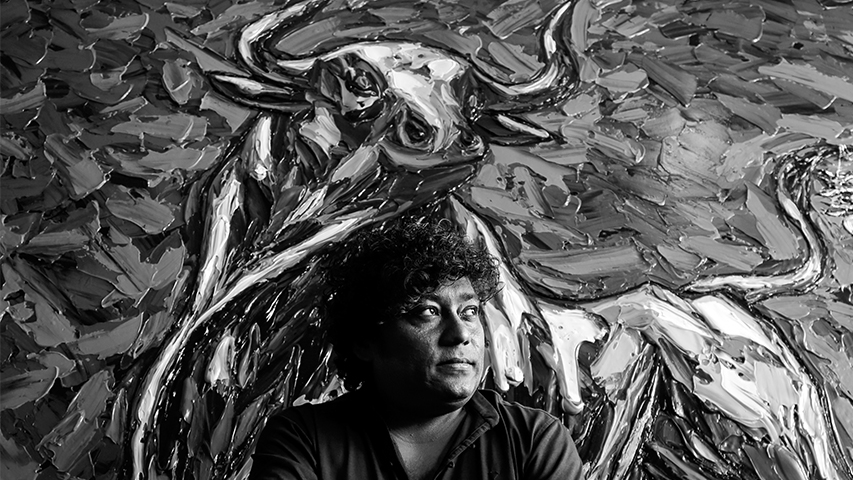 Different? How exactly? “First because I paint for myself exclusively,” he responds. “And second, because hopefully there’s honesty at the heart of every painting. I don’t grab images from the internet like many of today’s artists do. I don’t pass them off as collages and mixed media ‘originals’. Forget drawing a straight line, nowadays several artists can’t pull off a crooked, zigzag line.”

Unusually outspoken, Raj More’s story begins 45 years ago. Born in Akola to a family of the Mahar community – which embraced Buddhism – his father worked as a Class II government employee. Raj flunked his school examinations twice, since he was weak at grasping mathematics and science. He was written off as a wastrel who’d play cricket all day long in the maidans and return home only for meals. Fortuitously, his pencil sketches of Shivaji, Radha-Krishna Meerabai, Dilip Kumar and Smita Patil were noticed by a local art teacher, who suggested that he should study art.

From savings earned by performing at mimicry shows, during his teenage years, he cobbled up sufficient resources to move to Pune. “My take-off on a scene between Dharmendra and Sanjeev Kumar from Sholay and imitations of Shah Rukh Khan’s dialogue were a hit with the smalltown audiences,” he laughs self-deprecatingly. “At one time, I even thought I was destined to become a professional mimicry artiste or a comic actor if not in Hindi, then in the Marathi movies.” 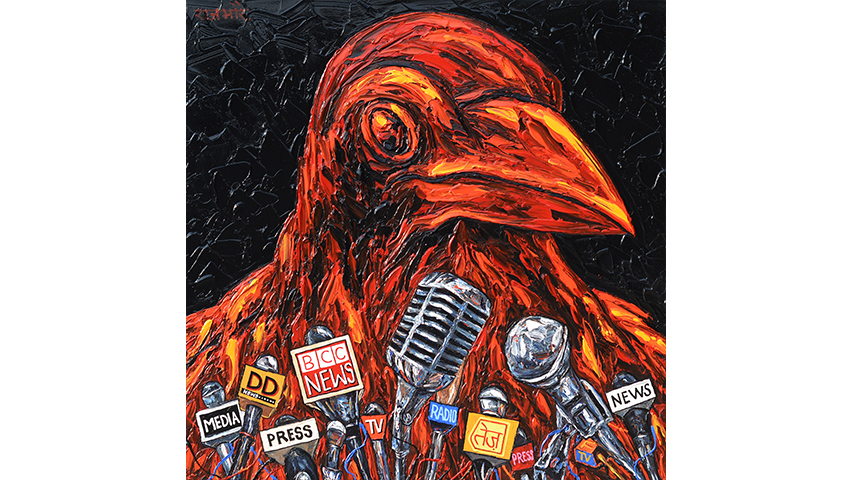 After acquring a diploma from Pune’s Abhinav Kala Mahavidyalaya, he found admission at Mumbai’s Sir J.J. School of Arts, where he graduated in Applied Arts, which could secure him a job at an advertising firm. Fine Arts it was felt didn’t ensure security or a decent flow of income.

To pay for his fees during the years at J.J. School, Raj painted at Film City backdrops for the films Baazigar, Akele Hum Akele Tum and the TV series Chanakya, as well as for a festival of plays by Nadira Babbar’s Ekjute troupe.

For months, Raj stayed at nights in a small room with 20 construction site workers where the rent kept increasing. With no other option left, he would commute to and fro from Mumbai to Pune by the Sinhagad Express every morning and evening. Nurturing an ambition to become a cinematographer after having seen Akira Kurosawa’s The Seven Samurai, he attempted to join the Film and Television Institute of India, Pune, but was rejected at the interview. 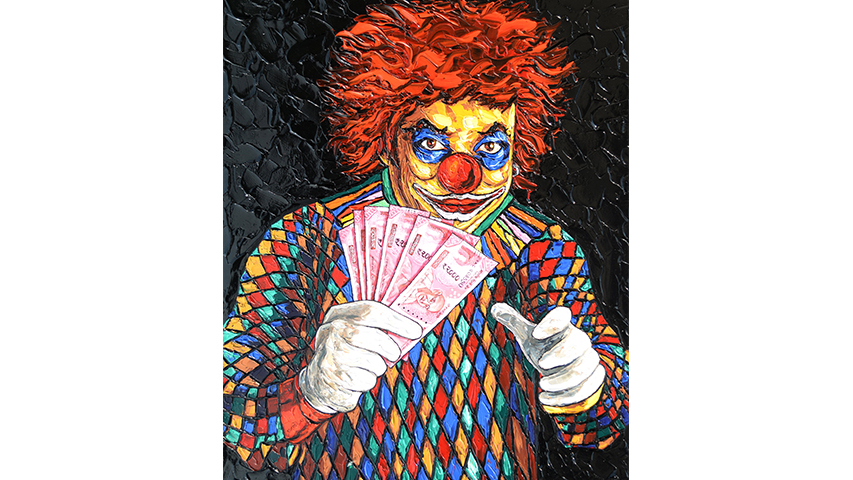 According to Raj, filmmaker Aruna Raje felt that he was too old at the age of 28 and suggested that he should assist a cameraman. “I got into an argument with her,”he rewinds. “Mohan Agashe, who was chief of the institute then said since there could be a drop-out from the chosen candidates, I should wait. How? I didn’t want to hang around doing nothing. I was extremely angry and walked out, saying no thank you.”

For a while, he would appear in comic sketches for the MTV channel, and continued with his mimicry shows in Mumbai. Simultaneously, he continued to paint, in the hope that his day would come. It did when gallerists expressed an interest in promoting his canvases. The legendary theatre director, Ebrahim Alkazi, on seeing his work, advised him to see people in close-up and avoid using too many background details.

Lucking out with the National Academy Award, Raj after two decades of struggle found his metier.

Over 200-artworks-old now, he mentions Jackson Pollock, Vincent Van Gogh and the early work of M. F. Husain as his favourites. “I don’t imitate them though,” he adds quickly. “My inspiration is Mumbai city – reality bites here with its crowds, the everyday survival of the fittest, the overpowering hold of Bollywood on the public mind and the great divide betweeen the privileged and the underprivileged.” 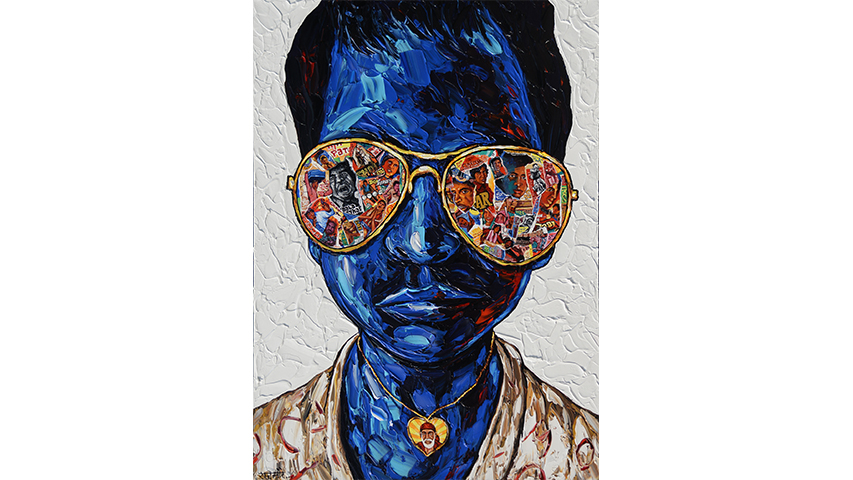 He’s among the bestseller artists. After the 2008 recession, the art market is steadily recovering, he points out, “Yet, it’s not an easy life. Collectors mainly go for the old masters as a form of investment. The galleries, at times, charge huge commissions…I am with galleries but not bonded to them slavishly. I’m free to sell my art online like I did recently to Saif Ali Khan who has a taste for contemporary art.”

“Mumbai city,” he exults, “is a place which encourages everyone to dream impossible dreams. Success is just the other side of failure. If it wasn’t for my persistence to hang on against all odds, I wouldn’t be here talking to you today. I can never forget one scene – my mother was on her death-bed in hospital. The last words, she said, ‘Raj, are your paintings selling? Are you making money at last?’ I could only nod ‘yes’ and she was gone.”

The filmmaking ‘keeda’, he smiles, is still within him. That’s why he is in the midst of helming a shot film titled Keeda, about an artist who suddenly finds the colours vanishing from his canvases. “From mimicry and art to filmmaking, that has been my journey,” he concludes. “Essentially I’m an artist, and always will be. But if I don’t try filmmaking, I would feel like an incomplete painting.”

I want to work on daydreaming: Sadiya Siddiqui