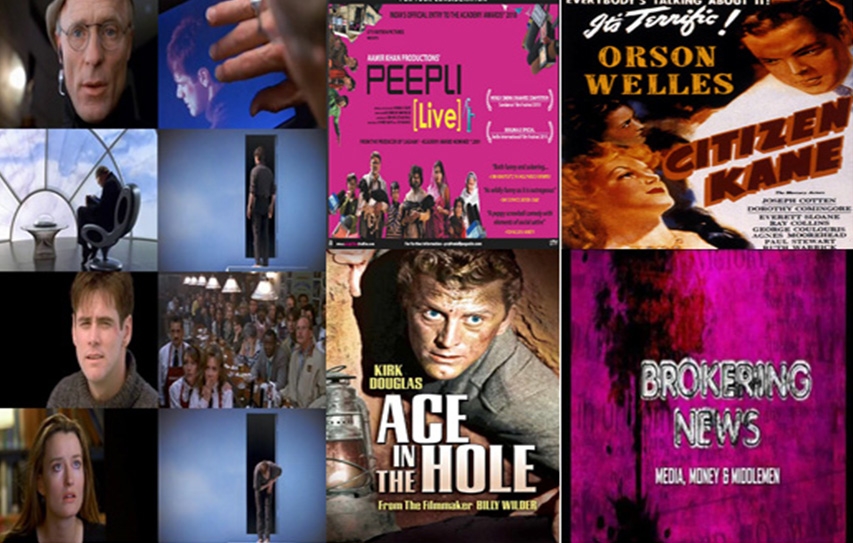 There is a scene in Inside Out where Joy and Sadness, Riley’s emotions along with Bing Bong, her imaginary friend are riding literally in her train of thought when they knock over boxes labelled Facts and Opinions. Bing Bong hastily mixes the contents and in a telling moment says that it makes no difference what content goes in which box.

This mix-up happens not just in Riley’s head or pre-teens in real life, but also the older audience that consumes the media before disseminating information further down. For a medium that was created to spread fact, the world is now bombarded with messages and news that lead to indignant television debates and panel discussions. Ironic that the media debates on ethics boost the ratings and overlook the purpose of broadcasting news.

This month’s top 5 films list movies with accurate, satirical and/or metaphorical takes on the media. So onward we march, without much adieu and in no particular order.

1. Peepli Live (2010, Anusha Rizvi): Peepli Live is a scathing look at the literal media circus that comes to town when an impoverished farmer (Omkar Das Manikpuri) decides to commit suicide so that his family can be awarded the compensation money.

This resolution draws the attention of a compassionate local journalist (Nawazuddin Siddiqui), but his empathy is lost in the swirl of media vans packed with overzealous reporters that want to chart the farmer’s last days.

2 Brokering News (2011, Umesh Aggarwal): Released by the Public Service Broadcasting Trust (PSBT), this documentary exposes the nexus between the political powers that be and the mainstream media. Those not content with merely influencing media own their channels.

It also touches upon the pressure on media personnel to generate revenue for publications through advertisements. Clocking in at barely 54 minutes, Brokering News is topical and available on YouTube.

3 The Truman Show (1998, Peter Weir): Our unsuspecting titular protagonist’s private life is under 24-hour scrutiny by voyeuristic viewers from across the world. His world is a lie and he is a household name, neither fact is in his attention just yet. Instances like the brand placements and characters returning from the dead are a nod to the reality shows and soap operas that rule the roost.

The Truman Show finds a disturbing echo in real life with the sadistic Japanese reality show Susunu! Denpa Shōnen where “Nasubi” (Tomoaki Hamatsu), a comedian, was kept naked and penniless inside an apartment for years. The only way he could survive was through participating in mail-in sweepstakes to win money and food items. To top it all, his ordeal was being screened in live-stream to an audience!

4 Ace in the Hole (1951, Billy Wilder): Much like Peepli Live and inspired by the Floyd Collins incident from 1925, Ace in the Hole was a caustic look at the exploitative nature of the press

Kirk Douglas’ suave yet brutal portrayal of a journalist who orchestrates a carnival out of a local man trapped in a cave has not aged over the years. The film stands the test of time as a classic and back then as a prophetic look at the state of the media today.

5 Citizen Kane (1941, Orson Welles): Orson Welles helms the forefront of the film that frequently tops the critics’ list in Greatest Films Ever Made. It charters the rise and fall of a media tycoon as he manipulates public opinion, the people around him and eventually falls prey to his own delusions which take him in a downward spiral. The film is said to be inspired by newspaper magnate William Randolph Hearst, who was infuriated by the film and did his utmost to suppress the screenings.

Despite the ensuing controversy, the lukewarm reception and a dark message for its time, Citizen Kane remains an enduring film school favourite and an innovation in storytelling.

The media may showcase a fine spectacle on prime time, but it contains the unfulfilling fluff of drama and little information. This month’s top 5 films (including other classics not mentioned) combine entertainment with messages. Its significance and timelessness makes these films a must-watch for the uninitiated.