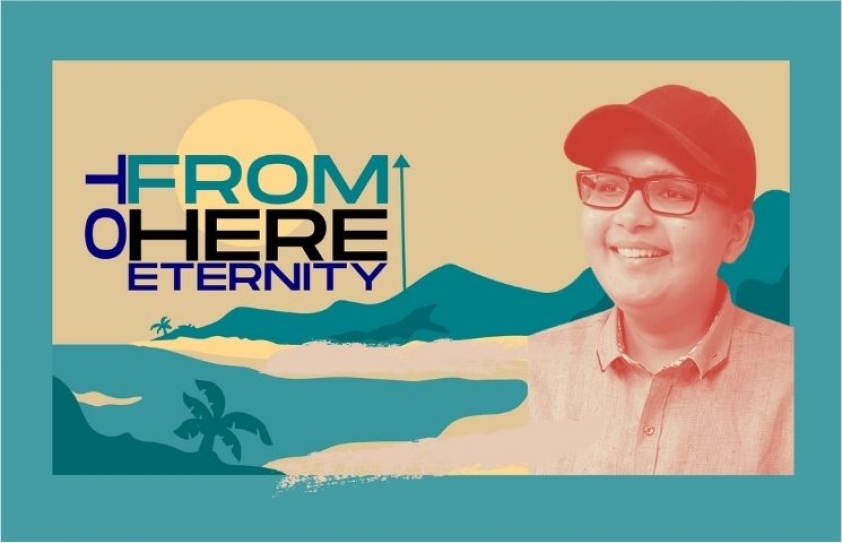 Nidhi and Sushil Poddar talk to Khalid Mohamed about their book Blaze…, a tribute to their late son Divyansh’s tryst with life in the face of a terminal illness.

The Poddars live down a lane from my housing colony, a five-minute walk. It must be close to three years when I met the genial couple at their neatly-appointed home.

Sushil was companionable, conversing about every topic under the sun from books and cinema to art and life in a busy metropolis. Nidhi would be hospitable, serving up tea and snacks. Their younger daughter, Ananya, would be invariably busy with her school homework.

At points, the conversation would shift to Divyansh Atman, their son who had been in and out of hospital ever since the age of 12, tackling with the spectre of leukemia. That the family was firmly bonded, even in the face of possibly tragic circumstances, was palpable.

Divyansh,  bright-faced and spirited even in the face of odds, would write stories, poems and thoughts. He would sit for his examinations at St Mary’s School and achieve top grades. He last attended a course in electronic engineering at Feirleigh Dickinson University, New Jersey, in the U.S. Back in India, the medical treatment and his writings continued. And then the inevitable happened, he passed away at the age of 22.

As the Coronavirus pandemic shut the world under a lockdown, Divyansh’s parents jointly authored the book Blaze: The Last Circumambulation Before Salvation, within a time-span of three months. It was as if they were possessed, as they say by divinity to essay a tribute to the departed one.

After reading the completed manuscript, which comes straight from the heart of the bereaved parents, I met them for an interview. Excerpts:

It’s been more than a year since Divyansh has gone. Your book is a heart-wrenching account of a family, which now has to continue with normal life. Has the book been a catharsis – has it mitigated your pain?

Sushil: The book may appear to be heart-wrenching on the face of it, but its underlying tone is the projection of the human spirit at its best in the worst of circumstances. Can we ignite our spirit while treading the path replete with darkness? Cancer? Can we rekindle the fire within ourselves on facing challenging situations, which make us evolved as we move on?

Nidhi: Yes, the experience of writing the book has  been a catharsis, I could relive each and every moment spent with my son with a certain depth and better understanding. The book has also made me realize that Divyansh has not left us, rather he has been reborn within me in a much more profound form. As for mitigation, I would say that ironically, this has never been a pain for me. The pain that you are talking about has made me ride on the crest of my motherhood, giving me a feeling of completeness. This pain has become a new normal for me. There is no question of mitigation. If at all it is pain, then I would like to live with this all my life.

Can you tell us more about Divyansh - where he was born, the first moment you held him in your arms?

Nidhi: Divyansh was born on 27 January, 1997, at my native town, Patna. There were some serious complications at child-birth. As the doctor said I could have lost him in the very first three months of conception only. But my motherhood was destined to blossom. The joy of giving birth to a child was divine.

The book publishing business is currently facing a slump because of the pandemic. How will you go about finding a publishing label, most of which are in Delhi?

Sushil: I agree. It may be a Herculean task to locate a good publisher, more so when the writers who are the parents of the protagonist, aren’t known names in the publishing world. Yet every book has its karma. Blaze has a certain purpose and I am sure it will find its readers. If it is ordained that a book and its readers must meet, it will happen sooner or later. Here is a culmination of collaborative efforts of three persons -- a son  giving us the impetus to write about his life journey and his excellence in literary skills, a mother narrating his journey from her perspective and a father, penning them in words applying his perspective.

Have you thought of self-publishing as a last resort?

Nidhi: The depth of Divyansh’s journey was so overwhelming to me that I often used to tell him to write his autobiographical account, to which he always said that the time was not ripe for him to undertake such an endeavour. It seems he handed the baton over to me take it forward;  something, which I was expecting from him to do.

I took it upon myself to try and spread his inspirational life far and wide to the maximum extent possible.. If through Blaze, he makes impact on the lives of even a few people, I would be convinced that our purpose has been achieved. So, I would surely look for an enlightened publishing label, which could disseminate the spirit of the book by its marketing reach.

The book is detailed and comprehensive. Are there any aspects which you couldn’t include?

Nidhi: Divyansh lived with us for only 22 years. Those years gave us insights into his intellect catalysed by the excruciating pain he was suffering from for as long as a decade. We have deliberately tried to downplay our pain, as his parents, or else the book would have been much bulkier. The aim was to portray the resilience of Divyansh, expressed by him in one of his poems The Rebirth through these lines:

Now, as I stand at the precipice of this path,

The true nature of transience, as it always is. 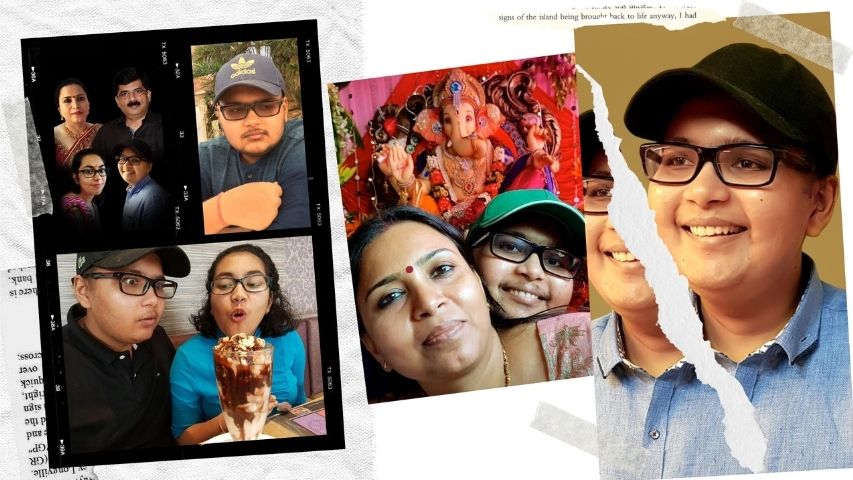 Sushil, you are a very retentive person, you never show your feelings in public. How did you alter yourself while writing?

Sushil: It was a tough ask for me, considering my retentive nature, as you call it. The active voice of the book is the mother’s - Nidhi’s. I had to follow what she wished to express. I tried my  best not to check or control her emotional flow, particularly in one of the chapters in which she has bared her heart and if I may add, soul - the way only a mother could. A woman is the stronger and purer gender of a family.

Nidhi: Sushil is endowed with the virtue of digesting pain as well as joy, concurrently. I have seen him interacting with people with a smile while festering with deep pain within. This is something I could never do.

Sushil had met his boss a day before Divyansh’s passing away. On hearing the news of his death, his boss came to the hospital to console us. And he told Sushil that when he had met him a day before, he had no idea of the  pain he was undergoing. I think, while growing up, Divyansh imbibed this quality from his father.

Sushil: Nidhi is a kind person. She speaks her mind out, she doesn’t hold back her raw emotions. At the same time, she is open to corrections. Whenever she feels she is wrong, she accepts that without any qualms. That’s why I have seen her evolve day by day in our marriage of 25 years.

Is there any writer’s style, either of you were influenced by?

Sushil: Not really. Maybe, Khaled Hosseini (most famously known for The Kite Runner and A Thousand Splendid Suns), to a degree.

Ananya’s struggle to cope with the loss of her elder brother must be acute. How has the family dealt with it?

Sushil: On the contrary, Ananya, has never shown any sign of pain of losing her brother. We have never seen tears in her eyes through the past 16 months. Like her brother, she has made her pain a way of her life to discover new facets of herself. It seems she hasn’t allowed the feeling of losing her brother to sink in.

There was an unfortunate misdiagnosis of the line of treatment to be given to Divyansh in the U.S. Does that still rankle?

Nidhi: It used to, but not anymore. Life can be a puzzle, which we attempt to solve in a destined way.

This is a question you may answer or not. Have you considered adopting a child, a sibling for Ananya?

Nidhi and Sushil: Divyansh hardly saw 22 springs of his life. But those were  condensed and intense encompassing all the karmas of a son. We always have a sense of tremendous satisfaction with all the love and the courage that he gave us. Hence, we have not considered adopting a child to move on in our lives. We must be one of those rare parents who have written a biographical story of their son. We did that because we strongly felt we had to. But I must add that we are aspiring to bring a part of Divyansh back to this world. In what way, we have given a small hint about it in the book, which should not be uncovered at this stage.

Divyansh idealised both of you…but he seemed to be closer to his mother… Sushil is it because of your round-the-clock dedication to your work as a government officer? Did he ever wish to sit for the UPSC examinations – the IAS of IFS?

Sushil: My personality is monochrome, which Divyansh used to soak in without saying a word. And Nidhi has multi-shades to her personality, which must have enticed Divyansh to explore the finer nuances of his own life, thus bringing him much closer to her. As a father, I always felt pride in this situation. I must tell you that the first poem which Divyansh wrote was about me. It’s titled, His Name Personifies Him.

Can you tell us what the name Sushil means?

Sushil: (smiles ruefully) I’m told it means ‘a man of good character’. Be that as it may, Divyansh took every day as it came, he didn’t mull over long-term goals. Maybe, he was aware of his significant cameo role in this life cycle. However, it was Nidhi’s biggest dream to see him sit for the civil services exam conducted by UPSC, which he wanted to fulfil at some stage of his life.

Divyansh began to believe strongly in Karma. Do you believe in it also, and  in what form do you see it manifesting further in your life?

Nidhi and Sushil: We strongly believe Divyansh is still doing his karma for his parents in his metaphysical form. Likewise, we as parents, are also doing our karma while he is no more with us physically. This book is a testimony of our karma to him. And we hope to take his legacy forward  to the book’s readers.