How Rita Hayworth has motivated him to write noir and how he cannot completely discard Oedipal undertones in his relationship with this gorgeous star, is what Sharad Raj writes about here.

With a pathological memory problem that I suffer from, I had only heard of Rita Hayworth but had no memory of her otherwise. Then I saw ‘An Affair in Trinidad’, a 1952 American noir B-movie, by director Vincent Sherman, recommended by my dear friend Ranjan Das. The effect of watching her dance and sing on the all-time famous number, “a chick a chick boom, a chick a chick boom…” was mesmerizing. One needed to be a poet to be able to articulate the impact of the song. I am no poet, so all I could do was absorb her as much as I could on screen and reminisce about her as if she was my muse. The sheer beauty she had and the elegance that Rita Hayworth exuded resulted in instant infatuation with the diva.

This song in the film is immediately followed by a scene where a cop and an embassy official come to meet her in the greenroom and Rita mouths one of the greatest all-time dialogue in Hollywood noir history:

Cop: When did you last meet your husband?/Rita: This morning at the breakfast table/Cop: Did you talk to him?/Rita: I asked him to pass the salt.

The dialogue is not just witty writing but in one short sentence summarizes the relationship between Chris Emery (Rita Hayworth) and her husband. ‘An Affair in Trinidad’ began my everlasting relationship with this screen icon of the forties and the fifties. One film of hers followed another. Next being Orson Welles’s fantastic, ‘The lady from Shanghai (1947)’. Welles, Rita’s estranged husband at the time, also acts in the film, and it needs no motivation to comprehend why Michael O’ Hara (Orson Welles) would defy both logic and instinct to follow a death wish in chasing Elsa (Rita Hayworth), the quintessential ‘femme fatale’. Such was the charisma of Rita Hayworth that it could also take care of some screenwriting imperatives. With two films seen, consumed, revisited time and again, I started to hunt for a print or a DVD of her iconic screen role from another noir, ‘Gilda’ (1946). The famous quote of Rita, “They go to bed with Gild; they wake up with me”, not only encapsulates the tragic and much abused life of Hayworth, but it also epitomizes the classic split between persona and the reality of movie stars.

The DVD of ‘Gilda’ was finally purchased. It was the second of the five films she did with another noir star of the forties, Glenn Ford. She and Ford never married but had a long-lasting affair. Finally, Glenn shifted to a house next to hers in Beverly Hills. ‘Gilda’, an intense story of extreme love and hatred is the perfect enunciation of the persona of Rita Hayworth. This singing-dancing leggy lass old enough to be my grandmother, has been a personal inspiration to the extent that it motivated me to write a noir feature, which is now waiting for the lockdown to end. I cannot completely discard Oedipal undertones in my relationship with this gorgeous star. It is Rita Hayworth alone that made me delve into this fabulous genre of film noir practiced by some very important and great filmmakers. Today I rarely miss a noir especially if it stars Glenn Ford or her. Rita acted with several major stars of her generation like Fred Astaire, with whom she did two films - You Will Never get Rich (1941) and You were Never Lovelier (1942) and Cover Girl (1944) with Gene Kelly.

Such was the influence of Rita Hayworth on popular culture of her generation that Italian master Vittorio De Sica uses her poster in his timeless masterpiece, The Bicycle Thief (1948). It is while pasting a Rita Hayworth poster that Antonio, the protagonist’s bicycle, gets stolen.  American writer Stephen King wrote a novella, ‘Rita Hayworth and Shawshank Redemption’ (1992), that was adapted as a film in 1994 starring Tim Robbins and Morgan Freeman. Andy Dufresne (Tim Robbins) puts the poster above his bed as a cover to the tunnel he is digging at the Shawshank Redemption center. Rita’s biographer Barbara Leaming, in her biography titled ‘If This Was happiness’, chronicles a life of much abuse starting from her father to studio heads and most of her five husbands except Orson Welles. Charlton Heston in his autobiography writes about an evening he spent with Hayworth and her husband, producer James Hill, "it turned into the single most embarrassing evening of my life".

He described how Hill heaped "obscene abuse" on Hayworth until she was "reduced to a helpless flood of tears, her face buried in her hands". Heston wrote that the others sat stunned, witnesses to a "marital massacre", and, though he was "strongly tempted to slug him" (Hill), he left with his wife Lydia after she stood up, almost in tears. Heston wrote, "I'm ashamed of walking away from Miss Hayworth's humiliation. I never saw her again." 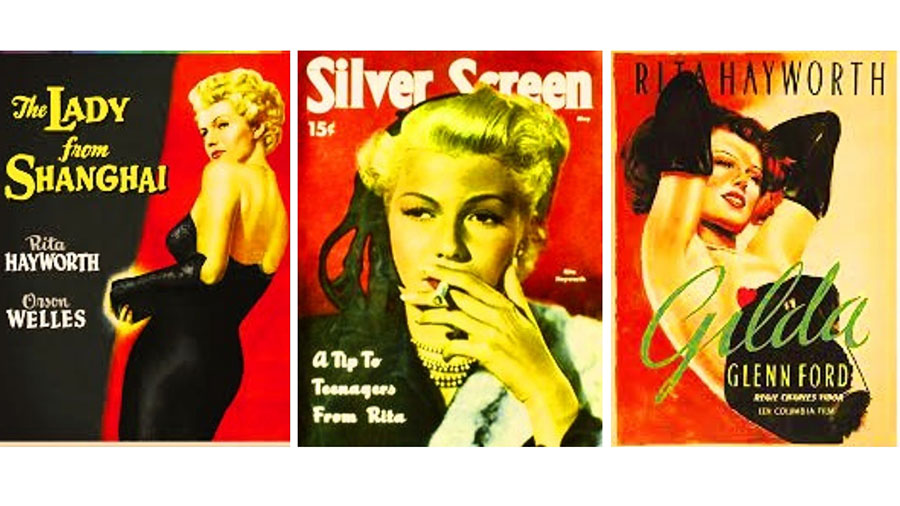 Not just her personal life, her relationship with her studio Columbia Pictures was also tumultuous. As her life did, alcohol and mental condition, too, took its toll, Rita succumbed to Alzheimer’s and alcoholism at last, on May 14, 1987. Leading luminaries were her pal bearers including Glenn Ford. Rita Hayworth in my opinion is a legend and the single most fascinating movie star for all times to come. Here will be no Hayworth again.