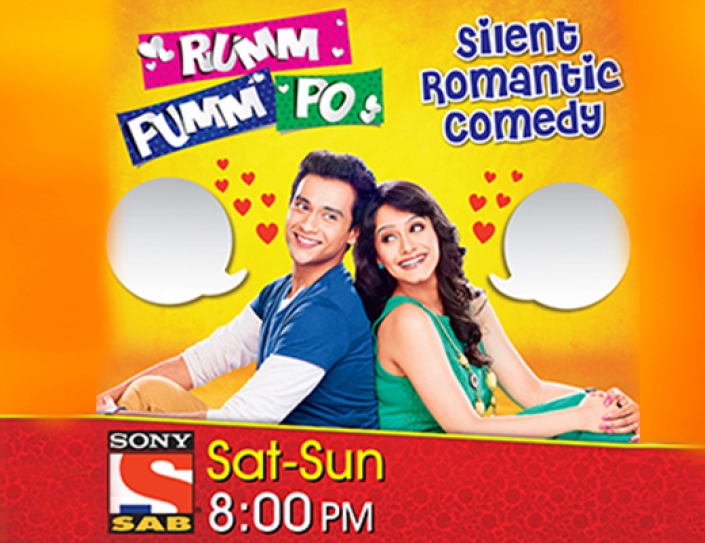 June-July is traditionally the time for new shows. In fact, SAB TV jumped the gun in early June with an unusual RomCom, a very silent Rumm Pumm Po, with music only ? every Saturday. It?s a traditional new neighbour?s take on the old ones, while it?s love at first sight for the boy and girl. The production design and approach is like that of a comic strip, complete with cue cards and expressions of the characters and a colourful setting.? Amit Behl and Maninee Mishra showcase their adeptness at mime and comedy. SAB TV has earlier successfully entertained Saturday night viewers with a well done comedy Gutur GU, replete with gags and slapstick. It never fails to entertain even with repeats. Rumm Pumm Po too promises to be a silent entertainer.

SAB TV?s weekday 10.30 pm slot has a change of content. The Rohit Roy helmed Peterson Hill is being replaced by another mythological satire ? Krishna Kanhaiya. The latter is along the lines of the Akshay Kumar-Paresh Rawal starrer Oh, My God! It features Nikhil Ratnaparkhi, Shubhangi Gokhale, Sudhir Pandey and Siddharth Arora. This new satire follows the success of Yam Hai Ham.

The die-hard viewers of Life OK?s super thriller ??Mahakumbh- Ek Rahasaya, Ek Kahani!?are getting set for the finale of the game changing show at 8 pm. The narrative is heading for the denouement fatale, which will be replete with more high end action.?

The coveted 8 pm slot on Life OK will now be filled by a hospital drama Roshni -- Ek Nayi Ummeed.?Pooja Gaur?plays a cardiac specialist, inspired I would say by Munnabhai. A USP of the show marks the inclusion of three senior actors, two of them Amol Palekar and?? Raghuvir Yadav make a comeback to television, and Divya Seth.? A promising watch for older eyeballs who are familiar with the performances and shows of the three veterans. Roshni won?t be action-packed, but it will be dramatic.

There is a curious trend emerging on the content front. Sony Entertainment Television has grabbed the mythological genre by its horns, so to say. Currently on air at 8 pm is Sankatmochan Mahabali Hanumaan?which has singled out the story of Hanuman from the Ramayan. There are more unknown stories about Hanuman, which will emerge in the show. Arya Babbar who plays Ravan makes his TV debut.?

Swastik Pictures must have so much unused research on their magnum opus Mahabharat which they made for Star Plus, that they are making Suryaputra Karna for Sony TV. This serial will focus on the ultimate unsung epic hero, and give him his place in the epic hall of fame. Going by their production standards, this show is bound to knock our socks off. So, weekday nights 8 pm to 9 pm is Sony TV?s mytho-band.

A surprise addition to the current cast of Dil Ki Baatein Dil Hi Jaane is Sai Deodhar. She plays a crooner in a bar who saves Ram Ahuja from being arrested for not paying his bill and takes him to her home. A talented actress, whose comeback to TV is Udaan on Colors, where she plays Chakor?s mother. But the vagaries of the script had her character on the backburner; she seems to have ample scope in DKBDHK, where she plays a feisty crooner with energy and screen presence. We don?t know how long the role will be, but right now Sai Deodhar has a good platform to showcase her talent.

Now that India?s Got Talent Season 6 is winding down on Colors, Jhalak Dikhla Ja Season 8 will move into its weekend slot to keep reality show fiends entertained.

Almost in sync with the rains, the channels too have a season change. Its fresh shows on weekday nights and glitzy home entertainment on rained out weekends over cups of masala chai or soup and pakoras or zesty finger foods.