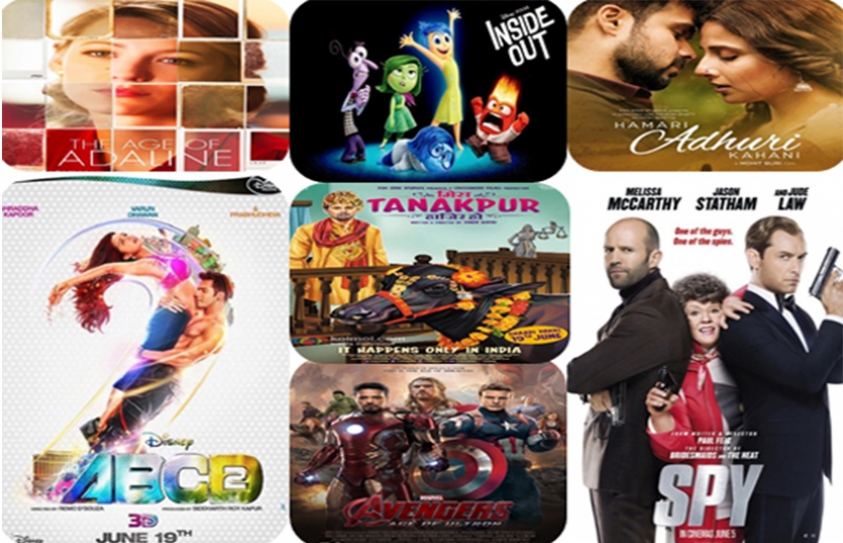 Thank goodness for Zoya Akhtar. After a great record with Luck By Chance andZindagi Na Milegi Dobara (or even Sheila Ki Jawaani from Bombay Talkies), she delivers with Dil Dhadakne Do (June 5th).

It could be the commendable filmography that raised the bar of expectations for this romcom cruise. Despite the clunky canine voiceover in the film and an abundance of tracks, it deservedly got great reviews and a befitting opening. It is still going strong in its third week.

The Age of Adaline may not have had either the acclaim or the collections, but Blake Lively and Harrison Ford did redeem the timeless love story with good performances.

Performances and franchise power alone can carry a film at times. That is what happened on June 12th when Jurassic World hit Indian screens. The fourth in the series has overtaken the collections of Avengers: Age of Ultron and has hit $500 million in collections. It devoured all box office collections, which includes Humari Adhuri Kahani, a tender romance which paled in comparison to the stature of the competition and its own lack of positive reception.

June 19th’s major releases hit home run. Spy introduced Melissa McCarthy as an unlikely heroine in a clever take on the espionage genre. Remo D’Souza’s ABCD2 hit the right notes and swayed to the perfect beats with the audiences, sweeping box office collections in its first week. The dance drama is set to enter the 100-crore club in a matter of days.

It was the topical Miss Tanakpur Haazir Ho (26th June) which missed every mark at being effective, turning a hard-hitting subject into something facetious and juvenile. Anybody who ventured in for this one would be grateful for Inside Out, another Disney/Pixar feature which is well on its way to become a classic. Few films can entertain an audience of a wide-ranging demographic, which will keep this gem afloat at the box office for the weeks to come.

The most awaited release that opens July will be Terminator Genisys, though it follows in the wake of a cold reception on foreign shores. However, the presence of the sultry Emilia Clarke for all the ‘Khaleesi’ fans in India may give this film a fair opening. For those not familiar with Game of Thrones, this is still a throwback to an incredible trilogy.

For Salman Khan fans, Bajrangi Bhaijaan releases on 17th July, marking Eid and the box office with yet another exciting offering from ‘Bhai’ and director Kabir Khan afterEk Tha Tiger.

Neeraj Ghaywan’s Masaan, Karan Anshuman’s Bangistan and Nishikant Kamat’sDrishyam also hold promise for the moviegoers. So keeping our hopes up and remaining ever ready to take on the releases each week, The Daily Eye will report on the happenings next month.