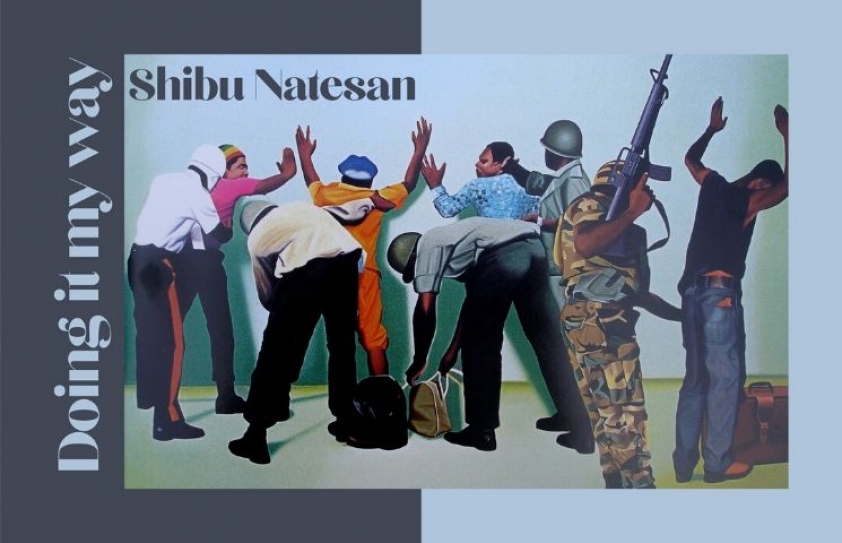 Khalid Mohamed interviews the eminent artist Shibu Natesan, who has varied from images of political protest to nature studies, whether he is in his homeland Kerala, Vadodara or the British countryside.

His art is so varied, refined and detailed that it would be a futile exercise in wordplay to ghettoise him as a practitioner of “photo realism”. Shibhu Natesan’s canvases, sketches and watercolours go beyond that, preventing me from reaching for gratuitous art argot, which frankly comes in a spectator’s way of seeing.

In person, as in his art, there’s a certain unreachable quality about the 54-year-old artist. Perhaps because he has exhibited his work in India only once in a deep-blue moon. Alternating between his homeland Thiruvanthanpuram and Vadodara - the two cities where he studied different disciplines of art - and England, Natesan perhaps speaks only when spoken to.

Incidentally, in one of his rare interviews, he has stated, “When you are out of Indian you become more Indian. Your identity becomes stronger.” 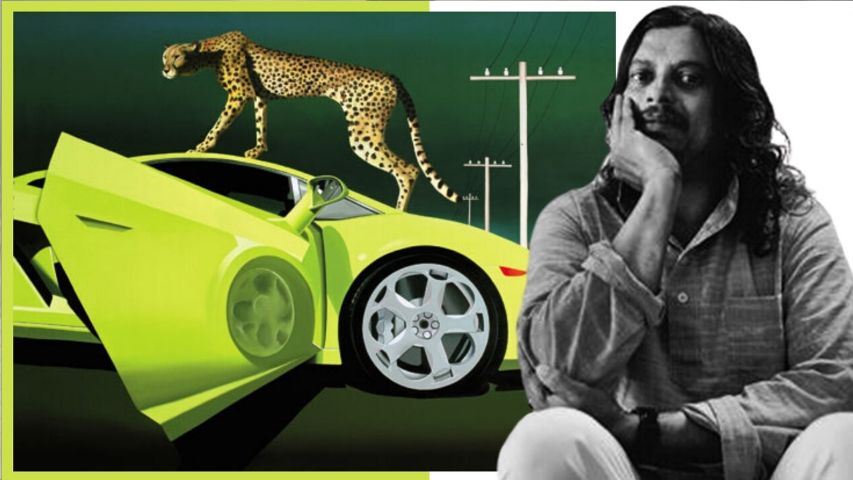 When I track the artist down to London via Facebook and WhatsApp, I point out that much ado has been made about the influences on his estimable oeuvre; his paintings command six-figure prices on auction websites; his signature carries heft reckon in the global art market.

He studied at the College of Fine Arts in Thiruvanthapuram during the early 1980s, which as a note on his art describes as “a time of continuing change and rebellion against the bureaucratic and stultified art establishment.”

He spent two years between 1996-97 at the Rijksakadmei in Amsterdam.

Yet little is known about him as a ‘person’, hence my aim is to get an insight into the ‘human factor’ behind the art. Perhaps he’s shy about family talk. So I’ve to give him that privilege of privacy. Apart from that, he responds to the questions, with the kind of methodical tenor evident in his oeuvre:

What is the first waking memory you have about yourself - the first visual which comes to mind from the first day of your life?

I see emblems of political parties in Kerala, and murals by local artists on the walls of abandoned buildings. Years later when I was in school, probably in the ninth standard, a friend of mine gave me a postcard he had found on the beach. The card had a print of a 17th century painting - The Laughing Cavalier - by the great Dutch painter Franz Hals. That postcard left an unerasable impact on me.

Your father was an  artist. How much of him and Kerala lingers in you?

My father was a teacher and a painter who owned an advertising agency for a long time. It’s at his office that I’d see artists at work. I was especially drawn towards the enamel painted billboards for soaps and hair oils.

He subscribed to several Malayalam weeklies, my sister studied literature; from them I developed the habit of reading. As for Kerala, I was born in the village of Vakkom, not far from Trivandrum. I had a perfectly happy childhood and one’s childhood and homeland linger in all of us, throughout our lives, don’t they? 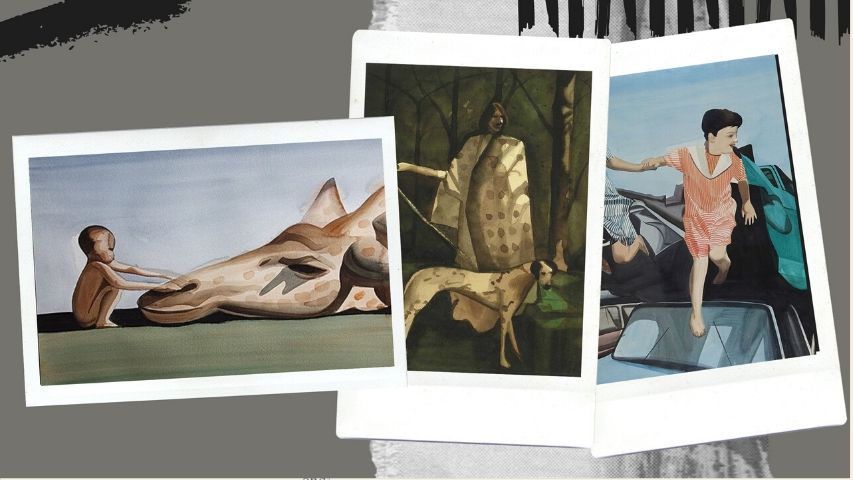 Was there any other form you aspired towards - like writing or filmmaking?

I don’t think so. I haven’t seen many commercial, popular films in my life. I have stopped watching them completely. Commercial movies are a nightmare. I must have been 15 or so when I got interested in art cinema.

Among the important filmmakers, there were  G. Aravindan, Adoor Gopalakrishnan and John Abraham. When I joined the Fine Art College in Trivandrum, film societies were on a high. I got a chance to see most of the master filmmakers. I loved the films of Carl Dryer and Robert Flaherty, especially.

I saw Aravindan’s first film - The Throne of Capricorn, 1975 - which I think is his best. Yet, I wouldn’t say these filmmakers ever influenced me directly. Cinema is another medium altogether.

From what I can read in your artworks - especially the watercolours of English gardens - there is a certain placidity and romanticism. Yet in your  larger works, as in the ‘Missing’ series, strong notes of political violence, unrest, and a certain anger can be detected. There was a palpable restlessness which has subsided.

In 2006, I came to a stage where I kept asking myself questions about my own art practice. I was desperate to come out of using photographic references which can be a limitation for painterly qualities.

Moreover, I was mostly dealing with political issues then. I began to realise that politics is like any other form of entertainment, which takes us away from reality. Politics is all about control, it can’t help the world in any which way. Essentially, I lost faith in politics of any ideology. People suffer because of the wrongdoing of politicians. As a result, there was a period when I couldn’t paint at all.

Now, I mostly paint subjects, which are in front of me and which I can relate to; landscapes, still life and models. That suits me because I love to travel; expeditions. I paint wherever I am. In London, I’ve been painting quite a few landscapes, which bring me closer to nature. I have always admired the landscapes of Samuel Palmer and Paul Sandby of the Cornwell school of painters.

I would disagree that my landscape paintings are romantic. Not at all. They aren’t like the  German and Scandinavian romantics. I paint what is in front of me. 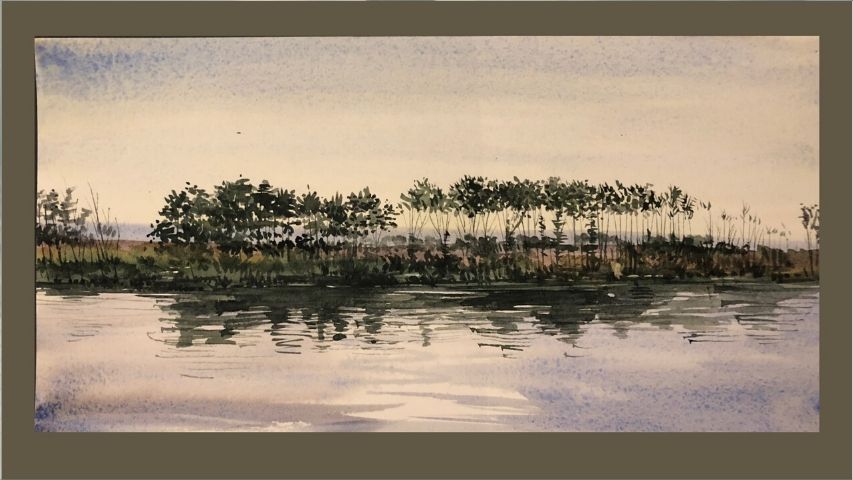 Today, there’s a surfeit of image-making on TV, internet and cellphones. Would you agree we are being manipulated by digital images which often have an agenda; consumerist as well as political?

Absolutely. The so-called advance of technology and the forces of capitalism are taking away from any direct experience with nature.

It is harped upon that you have been influenced considerably by various artistes, ranging from Bhupen Khakhar and England’s David Hockney.

Neither have influenced me. Bhupen Khakhar was a friend. And I’ve appreciated Hockney’s arrival into landscape painting of late.

Your comments on the state of art today?

Art isn’t addressing the state of the world. Most artists are going with the flow of glamour and what’s trendy. More disturbingly the art scene is being manipulated by some invisible forces.

Quite unpredictably you have drawn the hands of Alfred Hithcock. Where did that come from?

I was watching an interview with Hitchcock on YouTube and immediately sensed that he had a wonderful face which I could attempt to draw. Then I noticed that he expressed so much with his hands - it’s believed hand gestures are difficult to draw.  I had to give it a go. Similarly I’ve also done some portraits of U.G. Krishnamurthi from his interviews on YouTube. 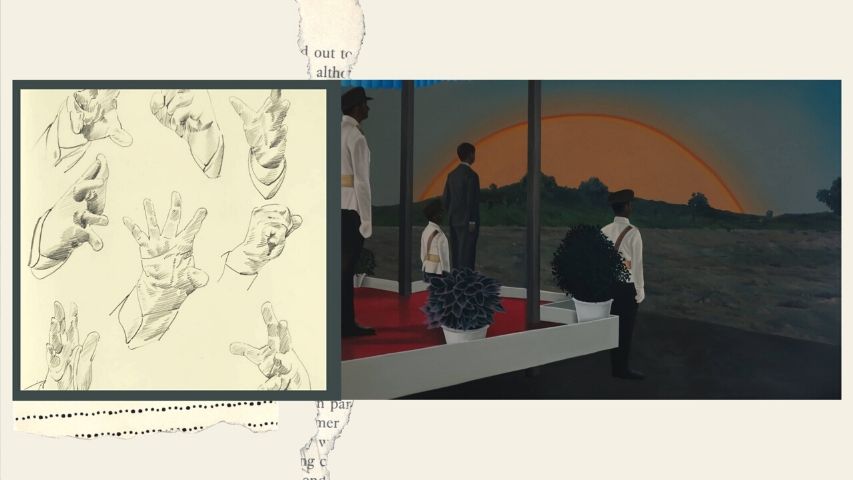 In an essay about you, I read that you’re very into reggae music.

I love Jamaican music which is generally called reggae.  Rastafari is not a religion, it’s a way of life. As with most reggae lovers, I started with Bob Marley which led me to more musicians,  like Toot and The Maytals, Burning Spear and  Ziggy Marley. The heart beat of reggae can never die.

If you were put in a spot, what would your last artwork be?

A portrait of nature or of a human being.