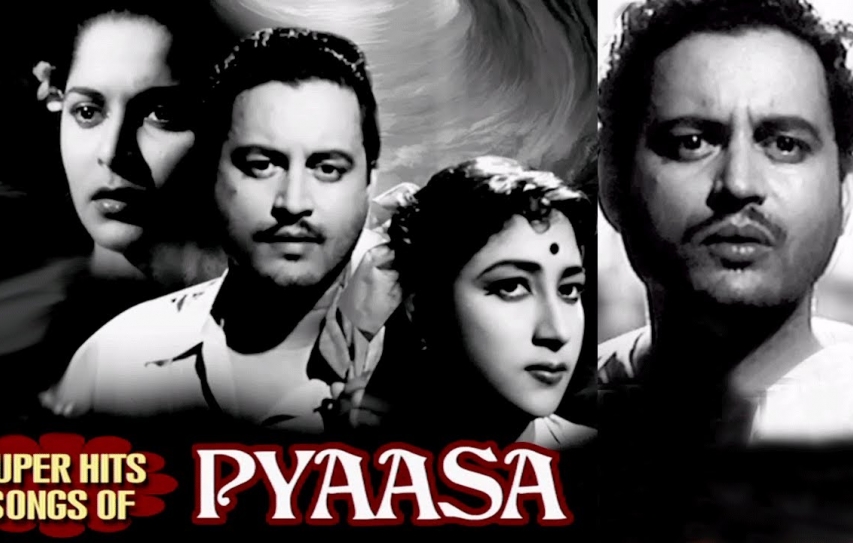 1) Ultra Media & Entertainment Pvt Ltd had 45 experts working round the clock for over 4 months to restore and bring back the film to its original quality and showcase it globally
2) Pyaasa will compete with 20 other prestigious restored films from all over the world for the coveted “ Venice Classics Award” for the best restored film
3) The 72nd Venice Film Festival will be held from 2–12 September 2015 in Venice
August, 2015,Mumbai: In a significant moment for the Indian film industry, Ultra Media & Entertainment presentation “Pyaasa”,a timeless Indian cult classic of 1957 starring Guru Dutt, Waheeda Rehman & Mala Sinha has become the only Indian film restored by an Indian company to be officially selected in the prestigious “Venice Classics” section at the forthcoming Venice Film Festival in September 2015

Ultra Media & Entertainment, who are the negative rights owners of Pyaasa, have restored this film completely for the grand occasion with an objective of preserving and presenting it in its original quality to the global audience. Pyaasa will be screened on 11th September 2015 at 2pm and 12th September, 2015 at 9am in “Sala Volpi” auditorium at Venice Film Festival

On this momentous occasion, Mr. SushilKumar Agrawal, CEO, Ultra Media & Entertainment Private Ltd. said: “It gives us an immense pleasure to present a cult classic like “Pyaasa” to the global audience. There is a huge fan following of Guru Dutt all over the world who have not been able to see this ageless magic in its original form and glory. It took us nearly 4 months to restore this film frame by frame and we are happy that the final outcome of the restored version can now be seen in its original form. Out of the many classics that we have restored, “Pyaasa” has a special place in our hearts. It is one of the rarest gems of Indian Cinema and we take great pride in preserving it and showcasing it globally. In fact the film has already created substantial buzz and we have several distribution enquiries from various parts of the world. We are also planning a major theatrical release of Pyaasa post its screening at the Venice Film Festival.”

Ultra has major plans to promote and market the film at the festival. 2 screenings of the film is scheduled at the festival venue. Ultra expects a huge demand from International Distributors, Sales agents, ancillary content aggregators & exhibitors for the restored version of “Pyaasa” at the festival. The most challenging part after acquiring the rights was sourcing the authentic materials to complete the preservation. After much effort, Ultra found the original camera negatives of the film at an archive in India, However a lot of the parts of the negatives were either damaged or lost.

Ultra decided to use as much parts as possible from the original Camera Negative and a few parts were used from 35mm prints. A new digital transfer was created in 2K resolution on the ARRISCAN film scanner. This in-house technology of Ultra Studio & Digital Lab (a division of Ultra Media & Entertainment Pvt. Ltd) helped in applying a multidisciplinary, data-centric approach to the entire film’s restoration process.

Once the complete film was digitally transferred, came the most challenging part of restoration. Thousands of instances of dirt, lines, scratches, splices, warps, jitters and green patches were manually removed frame by frame under careful supervision by experienced artists
The in-house talented professionals used a specialized film content mending and defect removal mechanism in their repair process. They carefully selected the best way to restore this priceless classic to its original quality.

The original monaural soundtrack was premastered at 24-bit from the 35mm optical soundtrack. Clicks, thumps, hiss and hum were manually removed frame by frame at the sound studio of Ultra Media & Entertainment .The film will be presented in its original aspect ratio of 1.33:1
“Venice Classics” has been a crucial section of the Venice Film Festival which has been successfully premiering world class restored classics in the festival. The prime objective of this section is to bring back to spotlight old, underestimated and neglected films of the past which has been restored an year back by film archives, cultural institutions or production companies around the world.

Pyaasa is the beautiful lament of Vijay (Guru Dutt), an unemployed young man who after being disowned by his brothers, sets out to carve a niche for himself as a poet in society. However, his hopes are crushed when rejections come his way, one after another. A jilted lover, Vijay is despondent when he comes across Gulabo (Waheeda Rehman), who seems to be the only pillar of support in his life. Throughout the movie, Vijay expresses shock and despair at the world so harsh, where people are blinded by avarice. Even his friends and family change colors like a chameleon when it comes to fulfilling their own desires. Overcome by grief, Vijay immerses himself into inebriety. Pyaasa is a well thought out story of an anguished man, seeking love and respect. The film is written by Abrar Alvi and cinematographed by the veteran Mr. V.K.Murthy
Producer & Directed by Guru Dutt, this all time classic have an ensemble star cast like : Guru Dutt, Waheeda Rehman, Mala Sinha, Johnny Walker, Rehman, Mehmood, TunTun etc. The movie boasts of one of the best performances of S.D. Burman, Sahir Ludhianvi, Mohammed Rafi, Geeta Dutt, ,Hemant Kumar to produce one of the most lyrical Hindi musicals ever. The film comprises of evergreen songs like : Jaane Woh Kaise Log, Yeh Duniya Agar Mil, Jaane Kya Tune Kahi etc
Ultra in the past have successfully restored various Indian classics like: ChoriChori( Raj Kapoor), Half Ticket (Kishore Kumar), Paighaam (Dilip Kumar,Raj Kumar),Insaniyat( Dev Anand,Dilip Kumar,Dil Tera Deewana(Shammi Kapoor) and many more. These restored films are ready to be screened globally. Ultra also holds negative rights for some of the prominent films of Raj Kapoor, Guru Dutt, V. Shantaram, Homi Wadia & studios like Filmistan, AVM, Gemini etc.

Ultra Media & Entertainment Private Ltd (Est. 1982) is a professionally managed Entertainment Conglomerate providing end to end solutions for the films & television Industry globally. It’s a fully integrated, broad based studio engaged in multiple aspects of entertainment, including full-scale film and television production and distribution, digital media and post production services. Today the company pioneers in Content Acquisition from various production companies worldwide & Distribution of various media rights of Indian & International films, Television Programs, Animation & other content in various genres & languages. They specialize in distributing this in various existing Physical, Non Physical and emerging formats in overseas countries. Ultra currently has an exhaustive library consisting of over 1500 titles comprising of blockbuster Indian Films, Timeless Classics, television serials and other contents and is associated with some of the leading production studios globally. To cater to the ever expanding global entertainment industry, Ultra has launched a state of the art pre and post production studio with the latest indigenous equipment and technology. It provides a plethora of services like Scanning, Restoration, Colorization, 2D to 3D Stereoscopic Conversion etc.