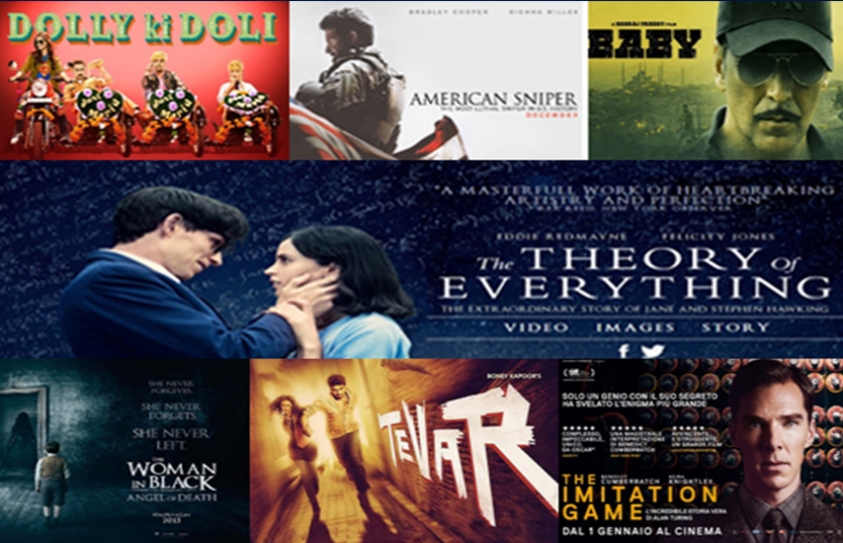 Of New Years And Shifting Gears

The first month sees the regular movie goers and critics troop into the theatres, perennially hopeful that their hours inside the soundproofed cocoon of moving images will be time well spent. Alfred Hitchcock, the master of suspense, believed that “A good film is when the price of the dinner, the theatre admission and the babysitter were worth it.”

The Daily Eye began the newyear with the bleak horror sequel The Woman in Black 2, a stilted recycling of its predecessor sans Daniel Radcliffe and the baby blue-eyed innocence that drew hordes of fans to the darkening mansion. Thus continued The Curse of The Sequels where Taken 3 disappointed in what should have been a high octane finale to the trilogy.
Bollywood’s Tevar held promise but succumbed to the beaten track of a ‘pyaar and maar’ storyline instead of a fresher take on the genre.
January 16th seemed a week for biopics with the releases of The Theory of Everything, American Sniper and The Imitation Game. There was little to compete with the Hollywood bonanza on desi shores other than Bipasha Basu’s Alone, which did business as mediocre as the critical reception it elicited.

Hindi movies jumped back in the game with an effective, song less thriller in Baby and the simplistic, effervescent Dolly Ki Doli. It is a box office clash of sorts between a testosterone-driven Akshay Kumar vehicle and one of Sonam Kapoor’s better releases.

While the outcome shall reveal itself next week, one awaits Khamoshiyan, another thriller from Vishesh Films, with a youthful cast and a melodious title track that has repeat value. It will be up against Hawaizaada, starring Ayushmann Khurrana, which is a biopic on scientist Shivkar Bapuji Talpade, who pioneered India’s first unmanned airplane in 1895 before the Wright brothers.

The upcoming weekend and the releases ahead of that show potential. Adman R Balki’s Shamitabh (6th February) has an interesting cast and very ambiguous publicity regarding the plot. The director has wowed the industry with his earlier feature-length ventures, setting the bar high for the next release.

Ranbir Kapoor plays the title role of Roy (13th February), alongside Arjun Rampal and Jacqueline Fernandez in the romantic thriller. Varun Dhawan is geared to set the screen ablaze in the revenge drama Badlapur (20th February). Anushka Sharma produces and stars in NH 10 (6th March), a thriller.Sushant Singh Rajput will reprise the role of Detective Byomkesh Bakshi (3rd April), a loved character in Bengali literature and its many adaptations for the screen.

At least until April, the Hindi cinegoer seems assured of a slew of intelligent films, without the flamboyance inspired from Southern cinema. Hollywood movie aficionados will be served the acclaimed and even the Oscar-nominated films like Foxcatcher, Birdman, Mr. Turner and Whiplash, in the coming months if they have not already found them online.

2015, for now, seems to begin on a good footing, provided the forthcoming releases deliver and shatter the creative dry spell that had plagued the industry and the box office last year.Thus we, the audience, brace ourselves, march onward to the ticket queues and the wafting aroma of popcorn to determine the fate of the films and our sanities.