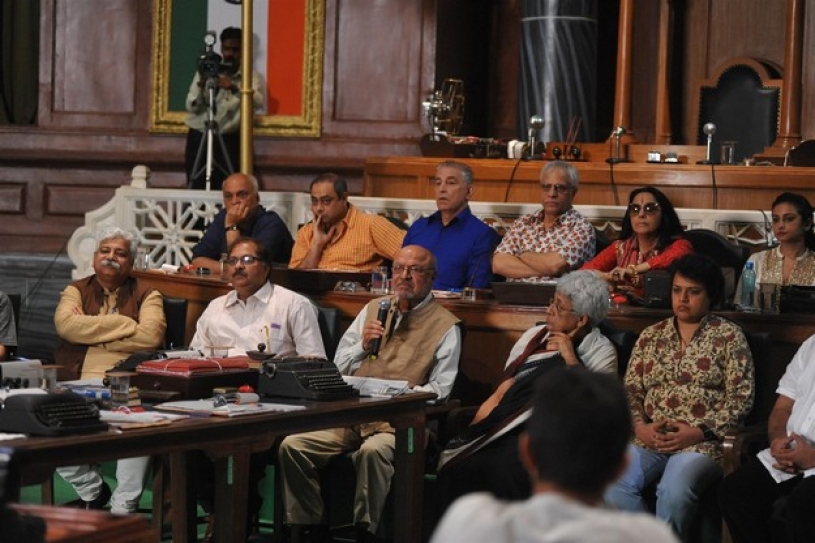 India has a remarkable democratic constitution that takes into account not only the large number of languages and dialects but also the variety of ethnic groups that are part of our country. A diversity unequalled in any other nation of the world.

Samvidhaan, discussion, drafting and framing took 2 years  11 months and 17 days by 294 members of the Constituent Assembly tells the exciting and dramatic story of the making of our constitution through debate. 155 members participated widely in the debates and made submissions.

Pia says her brief was to design the costumes that were specific to the period when the constitution was created. “I was asked to work on Samvidhaan  as the Costume Designer and recreate costumes for each character as realistically as possible. My tailors worked tirelessly on this project. Looking for specific accessories was a painstaking yet exciting exercise. Gradually I saw all my characters come alive. Each one of them began to look more and more like the original people whom we know as the members of our Constituent Assembly.”

Pia’s first film was ‘Antarnaad’. This experience took her to NIFT, New Delhi, where she studied and did a diploma in fashion design. And soon projects followed – ‘Mammo’,‘Sardari Begum’, ‘Making of the Mahatma’, ‘Zubeidaa’ to mention a few with her father, and filmmakers like Mani Ratnam),(‘Dil Se’ ) Govind Nihalani (‘Drohkaal’ ), Dev Benegal (‘An English August’ ) , and Kaizad Gustad (‘Bombay Boys’ ). Currently, Pia is working as the costume designer for the TV series ‘Siyaasat’ directed by Siddharth Anand Kumar. She was nominated for Best Costumes at the BAFTA awards in London (2008) for her work in ‘Last Days of the Raj’ (dir Carl Hindmarch).