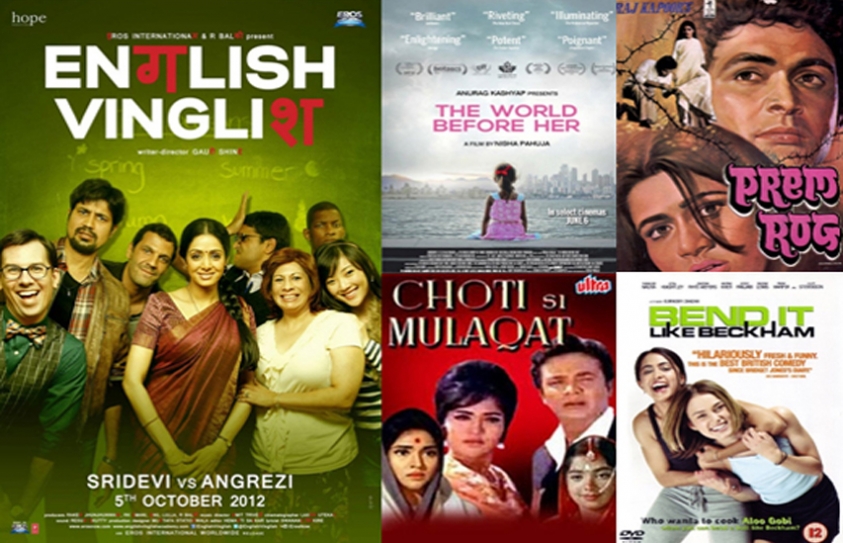 Out With The Old…?

Our society has been in a constant flux for change. There is a greater adaptation afoot in a nation like India because of its many contradictions, complexities and voices. The most pronounced tussle, above all, is between traditional and modern standpoints. Interestingly, the films in this list allude to women challenging their time-honoured roles and bastions, for if there must be change, it must come from breaking the “accepted” mould of women.

With that, we come to the countdown:

The World Before Her (2012, Nisha Pahuja): Challenging biases of the pre-conceived notions against (“boring”) documentary films and any perception of Indian women in general, The World Before Her wowed critics and viewers alike with an engrossing, forthright portrayal of the demanding glamour industry and the DurgaVahini wing of the Vishwa Hindu Parishad.

It follows the perspectives of the competing Miss India contestants, their mentors and the outlook of Prachi Trivedi, a prominent worker in her Hindu nationalist set-up. With both sets of women undergoing training (for grooming at one end and self-defence at another), the documentary draws parallels between the worlds that are, indeed, worlds apart, before merging the lines. The women on either side are driven, set in their goals while striving to fit into the framework of femininity set for them.

English Vinglish (2012, GauriShinde): Taking the screen by storm and the audience by surprise, Sridevi returned, not as a firebrand, dancing diva but as Shashi, a self-effacing homemaker. Her lack of proficiency in English opens her to either playful or cruel derision by her husband and daughter.

A humiliating experience at a café triggers her resolve to learn English. The journey there is beautiful but not bereft of obstacles. Shashi soldiers on, regardless, managing home and hearth while braving the unfamiliar subways of Manhattan to get to class. Light-hearted and empowering without any grand, sweeping statements, English Vinglish is director Gauri Shinde’s ode to her mother, the inspiration behind the tale.

Bend It Like Beckham (2002, Gurinder Chadha): Life is hard for poor Jess Bhamra (Parminder Nagra). It is one thing to survive as a dusky Indian family in London, that has been subjected to racial bias, quite another to want to play football with the ‘goray’.

Between the orthodox shielding of her conservative Sikh family and the encouragement from fellow teammate Juliette Paxton (Keira Knightly), Jess has to be at home in heels for her sister’s impending wedding and as savvy in cleats for football. This is coming-of-age combined with East and West, with cultural conflict and an eventual happy ending.

Choti Si Mulaqat (1967, AloSircar): Roopa (Vyjyanthimala) is married off to a boy by her grand mother when she is a teenager. Her mother rejects the illegal union and divests the child bride of a married woman’s ornaments. Years later, with that marriage a distant memory, Roopa meets Ashok (UttamKumar), though the incident will later come back to haunt her.

The film’s message may seem sexistin today’s time but had the hero supporting the heroine when her past catches up with her. Roopa, for her own part, is faced with a crisis of conscience between fulfilling her marital vows and divorcing to be with Ashok. But as is usually the norm in Hindi films, things work out for the better.

Prem Rog (1982, Raj Kapoor): Raj Kapoor had a knack for creating relatable characters and pitting them against time-worn conflicts and class wars. Prem Rog follows the same formula with melodrama added by the fistfuls, but endures as an entertaining classic to this day. Manorama (Padmini Kolhapure) is a naive and sheltered daughter of a wealthy, upper caste family in the village.

Her childhood friend Devdhar (Rishi Kapoor) returns from the city, armed with a modern viewpoint and a tenacity to challenge the long-standing conventions of the villagers. Doling a double whammy to the caste system and to widow remarriage, Prem Rog may get moralistic and preachy but has its heart in the right place.

The aforementioned films highlight the merging and the differences of the traditional and the modern beliefs in the context of everyday life. While some of the films may appear dated, it does not take away from their classic status or their individual merit. It may be reiterated yet again that this list is not exhaustive and only a reflection of the columnist’s perspective.

A humiliating experience at a café triggers her resolve to learn English. The journey there is beautiful but not bereft of obstacles. Shashi soldiers on, regardless, managing home and hearth while braving the unfamiliar subways of Manhattan to get to class. Light-hearted and empowering without any grand, sweeping statements, English Vinglish is director Gauri Shinde’s ode to her mother, the inspiration behind the tale.