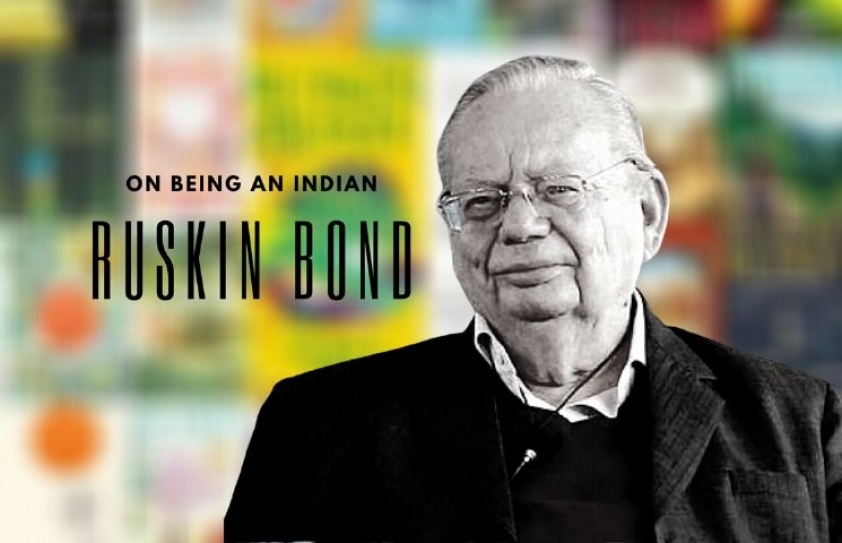 On being an Indian: Ruskin Bond

In his essay, "On being an Indian", Ruskin Bond explains his Indian identity, "Race did not make me one. Religion did not make me one. But history did. And in the long run, it's history that counts.” And going by the photographs I had seen of Ruskin Bond, I was sure the writer would be one of those ‘difficult-to-draw-into-a-conversation’ types. But then, as they say, looks can be deceptive. Here are some excerpts from the interview taken earlier. It is his 86th birthday on the 19th May 2020, writes Humra Quraishi

Have you ever experienced loneliness? You haven’t married and have no constant companion.

I stay with an ‘adopted’ family, so that way the apartment is full of people. The apartment has four rooms and we have twelve people living in it. The family consists of a set of parents and their two sons who are both married and have children. Also, this profession - writing - is such that you can only pursue it in solitude. You have to be alone so that you can write. In the evenings I go down to some friend’s home for a chat and a drink. I have two or three such close friends.

A lot of your readers, including me, have this little complaint about your writings - there’s very little focus on sex or say sexual romance, why?

(Smiles and then nods) You’re saying this, but once, during the Emergency in the 1970’s, I was hauled up in court on charges of obscenity. Yes I was, for my novella titled ‘The Sensualist’. I had to appear in court, though I was later acquitted. And I must tell you that there was nothing explicit in the book; maybe some sexual references in a romantic context.

Why do you think there’s this sexual fury and madness today, in the form of so many rapes taking place?

Sex in a context - that is, sex in romantic love - is one thing, but sexual anarchy is totally different. Our society is too repressed and so people are breaking free and going on a rampage.. Sexually explicit films are shown on television and this affects viewers as well.

Why did you decide to settle down in India, when you had the option of moving to the United Kingdom?

My mother did send me to England, but I returned. I wanted to be back and live here in India, although my two siblings are settled in Canada. I chose Dehradun and later moved to Mussoorie, because earlier my mother and step-father (my mother had re-married, a Punjabi businessman) lived there. Later, I didn’t want to live in a town which was too far from New Delhi, because of my writing and meetings with my publishers.

You have always worked as a freelance writer. How difficult does it get on the financial side?

Financially, the going has been tough. All through I have lived in rented accommodations. It is only last year that I managed to buy this apartment in Mussoorie. I wrote and wrote, for just about any publication in the country, be it a sports publication or ‘Yojana’. In fact, I must tell you this funny incident - that time Yojana was being edited by Khushwant Singh and though I’d sent a romantic and sexually explicit story, he published it in Yojana! (For those of you who don’t know - Yojana is a monthly journal devoted to the socio-economic issues. It started its publication in 1957 with Mr. Khuswant Singh as the Chief Editor. The government run magazine is now published in 13 languages viz. English, Hindi, Urdu, Punjabi, Marathi, Gujarati, Bengali, Assamese, Telugu, Tamil, Kannada, Malayalam and Odia). 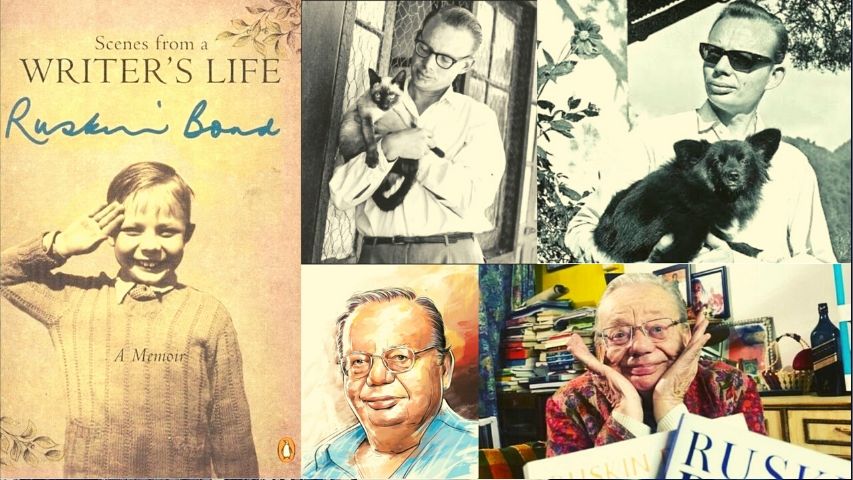 How do you manage with writing long hand in this age of computers and laptops?

Earlier I used the typewriter but lately I had a back problem so I stopped typing. And now I use long hand. That’s the way I give my manuscript to my publishers. It’s a fairly neat hand!

You are a white skinned person with a Christian name. Have you ever felt insecure on account of your minority status?

No, not now, maybe when younger. In fact, during the Independence phase I remember being hit by a stone in Dehradun. But nothing now.

You had mentioned that your mother had married a second time - a Punjabi businessman. Do you have any half sisters or brothers and how did your step father treat you?

Yes, I have a half sister - Premila Singh - who lives in Ludhiana. She is about ten years younger to me. She even visits me at Mussoorie. Regarding my step father he was okay. I was free to do what I wanted, he didn’t interfere.

Ruskin Bond was born to Edith Clarke and Aubrey Alexander Bond, in Kasauli, Punjab States Agency in British India in 1934. His father taught English to the princesses of Jamnagar Palace and Ruskin and his sister Ellen lived there till he was six. When he was eight years old, his mother separated from his father who then arranged for Ruskin to be brought to New Delhi where he was posted. Later after his father’s death when he was ten years old, Ruskin’s mother and stepfather who lived in Dehradun raised him. Following his high school education while in London, he started writing his first novel, The Room on the Roof, the semi-autobiographical story of the orphaned Anglo-Indian boy named Rusty. It won the John Llewellyn Rhys Prize awarded to a British Commonwealth writer under 30. After getting it published, Bond used the advance money to pay the sea passage to Bombay and settle in Dehradun. He had written Vagrants in the Valley in 1956, as a sequel to The Room on the Roof. These two novels were published in one volume by Penguin India in 1993. The following year a collection of his non-fiction writings, The Best Of Ruskin Bond was published by Penguin India. His interest in supernatural fiction led him to write popular titles such as Ghost Stories from the Raj, A Season of Ghosts and A Face in the Dark and other Hauntings. Since then he has written over five hundred short stories, essays and novels, including The Blue Umbrella, Funny Side Up and A Flight of Pigeons. He has also published his autobiography; Scenes from a Writer’s Life describe his formative years growing up in Anglo-India and a further autobiography Lone Fox Dancing was published in 2017. The Lamp is Lit is a collection of essays and episodes from his journal. Since 1963 he has lived as a freelance writer in Ivy Cottage Mussorie, in Landour, which has been his home since 1980).