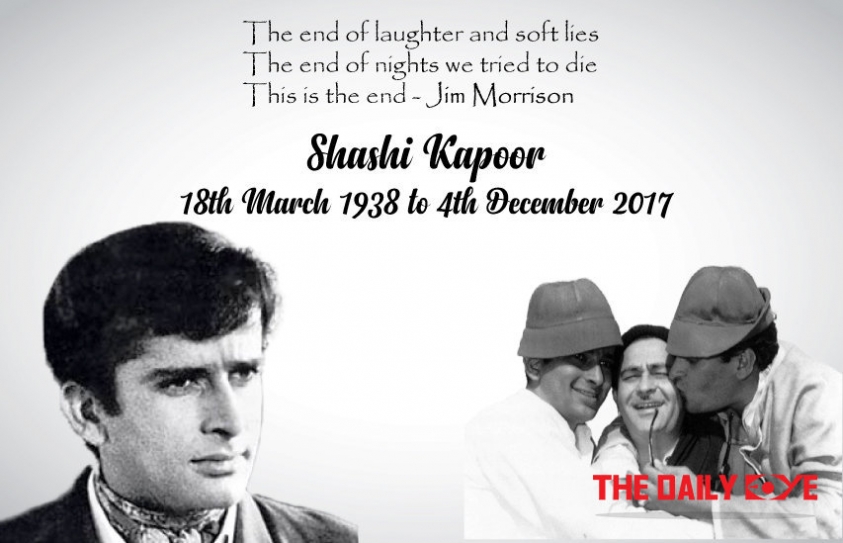 One of the brightest stars of our industry now resides in heaven, I guess it is God's turn to say "Mere Paas Shashi Kapoor hai".

Shashi Kapoor, born as Balbir Raj Kapoor, the film star was the youngest son of Prithviraj Kapoor, and brother of Raj Kapoor and Shammi Kapoor. The actor leaves behind three children - Karan Kapoor, Kunal Kapoor and Sanjana Kapoor. He was admitted to Kokilaben Hospital on 3rd December 2017 due to a chest infection, he passed away today evening.

The beautiful song "Khilate hain gul yahaan, khil ke bikharane ko" from the movie "Sharmeeli" is now trending on twitter while many prominent personalities are sharing their heartfelt condolences.

Here are some of the tweets:

#ShashiKapoor ji is no more... An era comes to an end... Thoughts and prayers with the family... RIP.

Sorry to hear of the demise of Shashi Kapoor, well-known actor, with a repertoire of Indian and international films. His support for meaningful cinema as a producer and pivotal role in the theatre movement in India too are cherished. Condolences to his family #PresidentKovind

RIP Sir. You will be deeply missed by all #ShashiKapoor

The legendary actor was awarded several accolades for his contribution to the entertainment industry, with the most notable being Padma Bhushan in 2011, and Dadasaheb Phalke Award in 2015.

Beloved and looked upon by many, Shashi Kapoor started his career in acting when he was just a child. He acted in plays directed and produced by his father Prithviraj Kapoor while traveling with Prithvi Theatres. He started acting in films as a child in the late 1940s, appearing in commercial films including Sangram (1950) and Dana Paani (1953). His best-known performances as child actor was in Aag (1948) and Awaara (1951).

He was also known internationally for starring in British and American films, notably Merchant Ivory productions run by Ismail Merchant and James Ivory, such as The Householder (1963), Shakespeare Wallah (1965) (opposite his sister-in-law Felicity Kendal), Bombay Talkie (1970) and Heat and Dust (1982) in which he co-starred with his wife Jennifer Kendal, The Deceivers (1988) and Side Streets (1998). He also starred in other British and American films such as Pretty Polly ("A Matter of Innocence" (1967)) opposite Hayley Mills, Siddhartha (1972), Sammy and Rosie Get Laid (1987), and Muhafiz (1994). He was the first Indian actor to work extensively in Hollywood and British films. He was seen in the limelight at the Shashi Kapoor Film Festival held in Muscat, Oman (September 2007). At the 55th Annual Filmfare Awards, Shashi Kapoor received the Filmfare Lifetime Achievement Award.

He will never be forgotten, our heartfelt condolences, may he rest in peace.