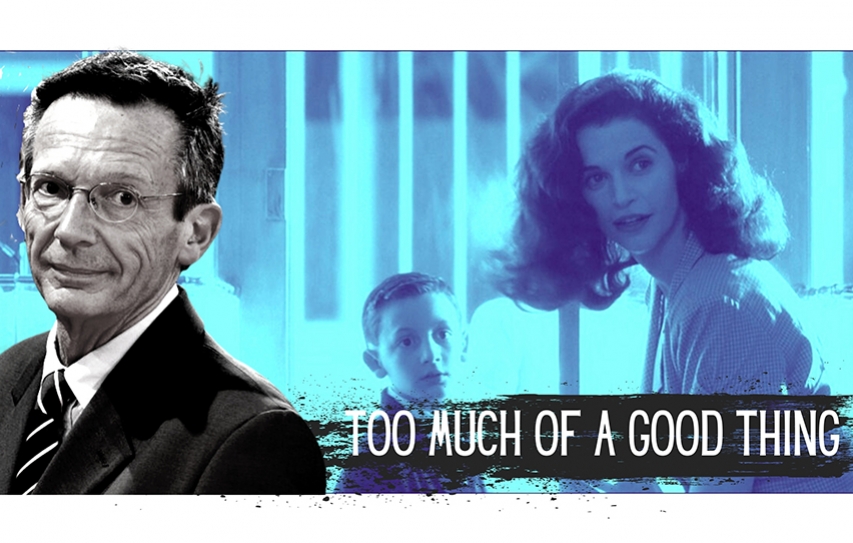 Vandana Kumar explores how a film like The Hairdresser’s Husband starts as a man’s fetish and ends like a singular love story.

In a world where there is no end to human wants, lies a tale of a couple very much in love, to the extent that all they desire is their little cocoon oblivious to the rest of the world. And yet when this desire comes true, can it be too much of a good thing? For nothing that beautiful can be eternal.

Hairdressers fascinated ‘Antoine’, for as long as he could remember and always dreamt of marrying one. Barely all of 12 years, Antoine (Henry Hocking) falls hopelessly in love with the local hairdresser (Anne-Marie Pisani) and finds himself hooked to the idea of having his hair cut by her. As an adult Antoine, smitten by Mathilde, marries her at the speed of lightning.  They get acquainted with the inhabitants of their quaint little town, which is just a handful of characters that visit their salon. In–between they romance and make love – all in the salon. Nothing can ruin their bliss until one stormy night Mathilde is plagued with insecurities.

There is something about the total assault on Antoine’s senses on entering a Hairdresser’s parlor – the sensuous feel of the hairdresser’s hands washing his hair as he stares right into her bosom. For him sublime had no other definition - just the whiff of the hairdresser’s perfume and a glimpse of her figure. This fascination is never explained but established right in the beginning.  What we are led to instead is a hero’s wish fulfillment - his marriage and the journey of this couple that just lives for each other and with each other as they cut themselves off from the real world.

This is a love story without a complicated plot or twists and turns, a film that takes place largely in the confines of a hairdresser’s salon. Clearly Patrice Leconte has no intention of spelling out their love and loading the film with dialogue heavy scenes. It’s all about feeling the romance in every single frame when they are together, which is about ninety percent of the film. 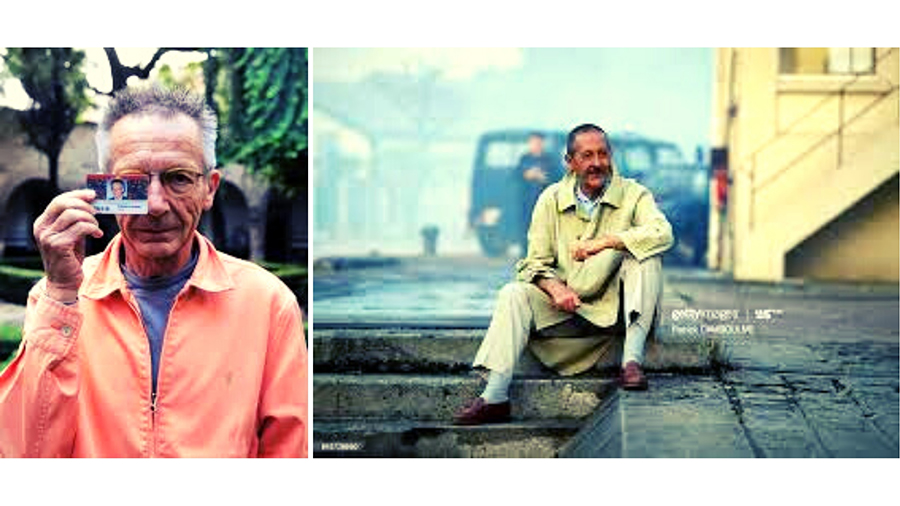 This French romantic film that is laced with gentle humor and an exploration of the senses through exotic Arabic music, received the Prix Louis Delluc (awarded annually since 1937) in 1990. In 1992 it was nominated for "Best Foreign-Language Film" in the British Academy Film Awards. Its César Nominations in 1991 were many and in all major categories, of which it won three - best film, best actor and best director.

So you have the Hairdresser’s husband spend his childhood ogling at the Hairdresser who captured his imagination. When he marries one, there is just this woman at the center of his universe. He lives the dream life that is the subject of many a fantasy. It is the stuff men joke about on a Saturday night at a pub - to have to do nothing for a living and have a gorgeous wife they can admire day in and out. Antoine does just that - sits around the salon all day, making this great pretense of reading world affairs in a newspaper or doing the crossword, when all that he is doing is watching Mathilde’s every move. The widescreen camera is in no hurry. It captures the wrist movements, Mathilde holding the dryer or the wrapping of a towel over the head of the customer. Watching her give a client a shampoo or a haircut makes Antoine think he is the luckiest man in the world. These itself become an aphrodisiac and extended foreplay. There is the wistful longing of the madly in love couple - waiting for the ‘closing hour’ for the lovers to be reunited. He watches the rise and fall of her breasts as she goes about doing her job. The director and cinematographer manage to pull fetish depictions of, with such a gentle feel – devoid of conventional male gaze that movies of this type would succumb too. It is rare to have such a gaze, one that is not only poetic but does not degrade women. Strange how he manages it when on deeper scrutiny there are dialogues that might seem sexist. Antoine, while describing his wife, says she is like “a conquered fortress; I’d make her mine forever.” Such dialogues would ordinarily make anyone with normal sensibility cringe and yet one doesn’t, because Antoine himself is not a stalker or a creep. He is someone who is not intending to be territorial. It is simply his way of expressing himself. In fact rather than Mathilde being a property, it is Antoine who can’t move beyond her and seems like a woebegone devoted pup following her around and he is miserable when she is out of sight. It is he who is chained in a sense. 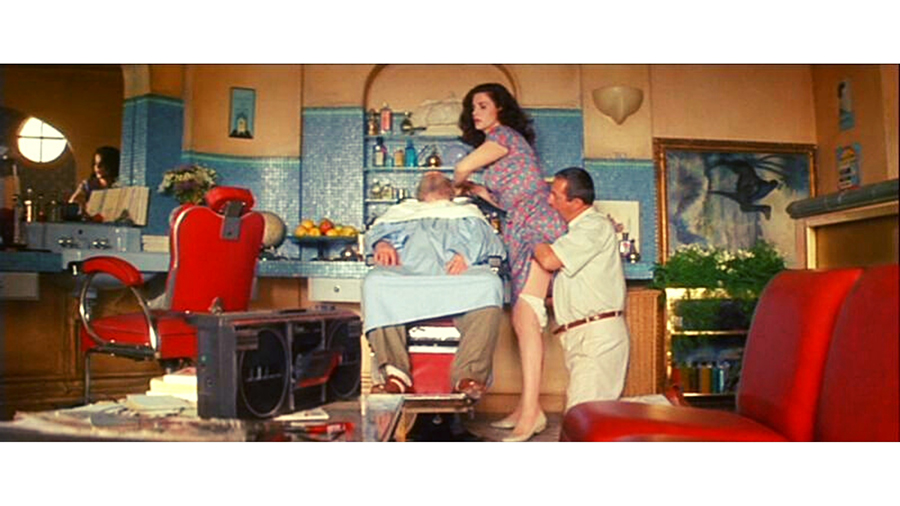 Patrice Leconte who is also an actor and comic strip writer has made other films where such fetishes are played. Michel Blanc plays the title role of ‘Monsieur Hire’ (1989) in Leconte’s film about loneliness. The protagonist is the most unconfident looking, balding, middle-aged character who makes for the most unlikely voyeur and starts spying on his beautiful neighbor.

Another noticeable film in his oeuvre is The Scent of Yvonne (le Parfum D’Yvonne). This one is again without much of a story. Lecontes works are mostly simple as far as evolved storylines go. Here it is about a man’s (a self-proclaimed aristocrat on an extended hotel stay in Geneva to escape draft into the Algerian war) reminiscence of an acute romance in the summer of 1958.

Leconte is in his element with this genre of erotic/sensual drama or reverie - beauties that appear out of reach for the protagonist. The dreamer of dreams is mostly the guy you don’t notice standing next to you, even in a crowded elevator. A fascination that would appear debauched on reading the script perhaps but it has a fairytale feel to its eroticism when on the screen.

The film, despite being about this husband and the hairdresser’s wife in their own zone of love in a salon, has another layer to it. Antoine tells Mathilde that 'the past is dead', and all that matters to them is the now, And yet the past keeps coming back in interesting ways. There are evocative flashbacks that take us to a life before the fairytale began and a stylized recreation of a bygone era.

The relationship with the father has black humor even as it sticks to the father figure’s horror at his son’s unconventional life decisions. There is a childhood scene of the family together and the father’s reaction on being told that his son’s burning ambition in life is to marry a hairdresser. Here the tender albeit brief exploration is first a slap as a reflex action and then the father feeling horrible about the action. Once the love affair with the hairdresser begins, there is no mention again of the father or how the family is progressing until Antoine invites them to his wedding. The absence of the father is casually mentioned by saying he died on hearing this news.

Leconte ensures that there is no monotony in the film but does not do it by creating discord or some conflict within the love story or episodes of trouble in paradise. It is done by breaking the silence with a few interesting customers at the salon. So there is a little boy reluctant to have a haircut and a husband trying to hide from an intimidating wife. This adds spark to Mathilde and Antoine’s life. The customers are scarce but that is all right with this couple that in any case seem to live on only love and the smell of the shampoos, if not fresh air. 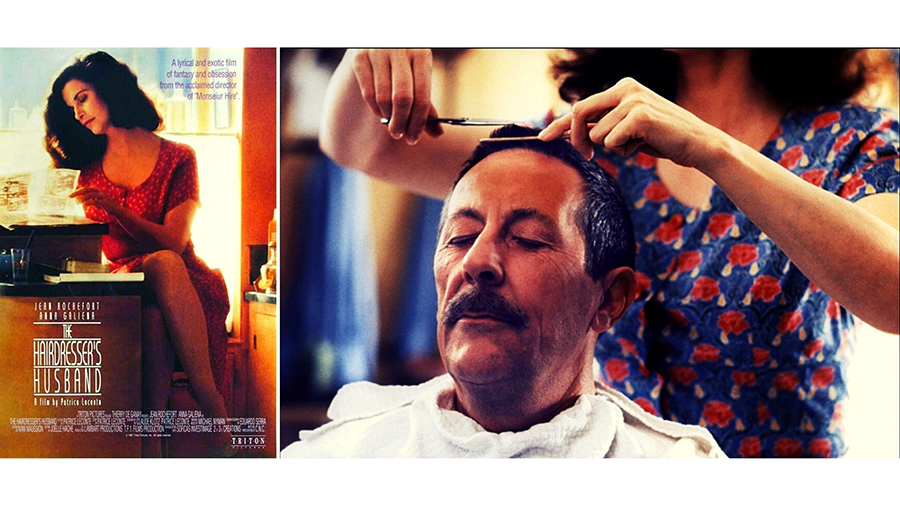 The film flows like its music, Middle eastern dreamy with an exotic touch to it. Its ode to fantasy and sensuality is enhanced by the wonderful sound track by Michael Nyman. The Arabian music pieces that Monsieur Rochefort sways to all through the movie make his character all the more endearing and adds to the gentle humor, romance and wistful longing as the scene demands. He says that he can’t dance and his gyrations leave you with a smile. It’s a ten-years of a whirlwind romance, one that fascinates us because outside of the salon, they have no friends or social life and no interest in one either.

Leconte’s camera captures the salon (from the barber’s chair that is shown to the smells of lotions and shampoos that you are made to imagine) and makes you go on the ride with this couple and all their eccentricities till the sensual – comic drama meets the only possible end that it could have. The final separation is lilting and sweet, even in its tragedy. Antoine continues his dance back in the salon. The last scene has him again dancing with the hope that the hairdresser will return. A love that completed him so much that he can continue to sway to music alone.

Antoine and Mathilde cut out from the world and loving it is indeed a fairytale – what with couples these days struggling to keep marriages afloat and desperately seeking spaces and personal time with friends and colleagues or simply ‘me’ time.

This very idyllic love can be the cause of the tragedy - the greater the love, the greater the fear of losing it. The magic realism makes one wistfully sigh and remember that in the real world, honeymoons get over. As Leconte himself puts it "Film is the medium that gives room to our fantasies, most of the time harmless, since they are fantasies. The cinema is often more beautiful than life, if only because we write the screenplay."

I do not know many films that would start as a man’s fetish and then end up as a singular love story. This ‘amour fou’ as the French call it (which means a mad sort of obsessive love) manages precisely that.