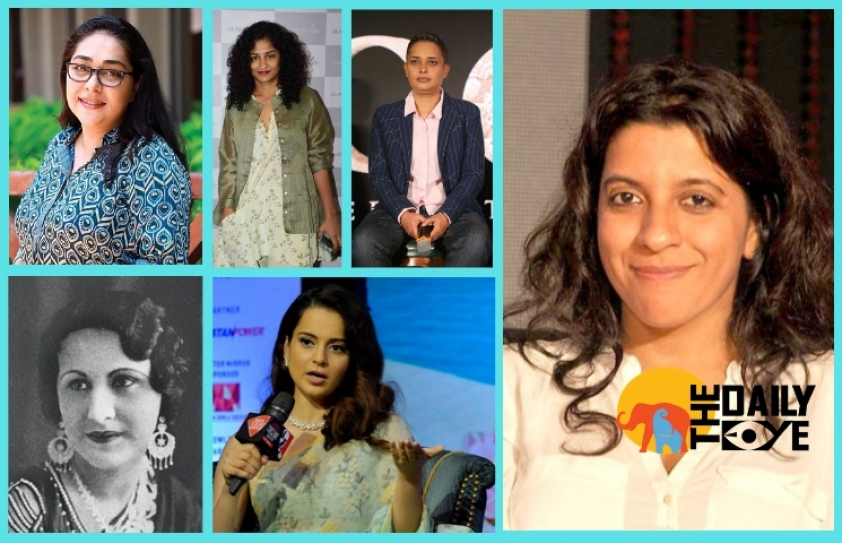 Women Directors who are rocking the Bollywood Industry

Indian society is always male dominated. Men in most societies were seen as breadwinners while role of women was restricted to being a good homemaker and a good mother. This applies to women in a highly patriarchal society of India. As societies entered the world of modernization, the role of women changed dramatically. Media played an important role in the modernization of societies and greatly affected the image of women in today’s modern world. From ‘Raazi’ to ‘Lipstick under My Burkha’, female directors have rocked the film industry.

There was a recent talk about director Kangana Ranaut with the success of ‘Manikarnika: The Queen of Jhansi’ since she had taken over the direction after the original director Krrish had handed over the director’s role. The Free Press Journal reports the first Indian woman director Fatma Begum - whose directional debut was a fantasy film ‘Bulbul-e-Paristan’, directed in 1926. Since then many female directors were brought to spotlight in the later eras.

Sai Paranjpye and Aparna Sen glorified art in cinema. Sai’s ‘Sparsh’ touched a beautiful subject on how intense love in a friendship can be and how sometimes, it takes a difficult path to emerge between a couple. She is also known for her commercial hits though in the middle-class milieu like ‘Katha’ and ‘Chashme Buddoor’. ‘36 Chowringhee Lane’, directed by Aparna Sen was a wonderful take on human expectations and disappointments. The film won her the Best Director Award at the Indian National Film Awards.

Other directors such as Revathi, Mira Nair, Deepa Mehta, Reema Kagti, and Gauri Shinde joined the journey in the upcoming years. If a plot is given into the hands of these incredible women directors, it is admirable how differently a woman perceives relationships, friendships, emotions and verve, as compared to most men.

Revathi’s directional debut ‘Mitr’, took a simple story to a whole new level, where a couple rediscovers a lost friendship and unfathomable love for each other in a unique way. Gauri Shinde, the director of the film ‘English Vinglish’ ensured that the film takes a stand among the gender equality in the society - when Sridevi, as Sashi, transforms into confident mompreneurs in the film, she voices her trouble - “When a man cooks, it is art. When a woman cooks, it is duty!”

Zoya Akhtar’s recently hit ‘Gully Boy’ is a superb example of her gifted talent. Reema Kagti’s ‘Talaash’ is another example of a well-directed film that sensitively portrayed loss and grief in its various shades. Sandeep Hatangadi who wrote for the Free Press Journal states: “The change in mainstream cinema brought about by these women directors is slowly gathering pace, and there is great scope for them to evolve into an inspiring brigade of filmmakers with groundbreaking skills!”

On speaking to a few female gurus, the role of cinema and how women managed to cope up was made clearer.

“When I started out it was a patriarchal society in the film industry and only actresses and hairdressers were seen working on the sets. Even the editing rooms and other post-production studios were full of men and I had a hard time working as an editor in the editing studios. Now, of course, many talented lady directors have come to the fore and not only in direction but all processes of filmmaking and I am happy for this change. My next film ‘Firebrand’, which is in Marathi and will release on Netflix, is about a dashing female lawyer who has been abused in her childhood. And of course in the industry too we have seen the #MeToo movement. The women are raising their voices against injustice and I am happy for that.”

“I feel that women in all walks of life are coming up and it is not restricted to the film industry alone. The number of female directors is growing day by day because they have been accepted as equals in this male-dominated industry. I also feel that women can relate more to sensitive subjects because their outlook towards life is different. Even now I am making my Hindi film debut as a director and I am all excited about it. And this does not mean that men can’t make women-oriented cinema as veterans like Gulzarji have proved with their protagonists being females in his classic cinema.”

“I feel that women are coming forward in all areas of life and the earlier gender inequality is not there now. Women directors are more aware of their talent and are ready to handle better subjects with better ideas like Zoya Akhtar whose recent hit ‘Gully Boy’ is a prime example of a female director excelling at her work.”