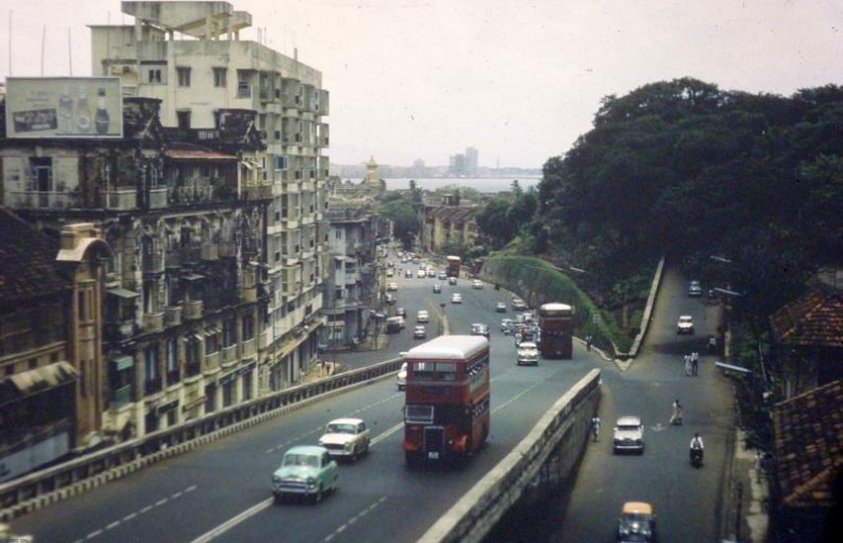 December 1, 2014 isn?? just significant as the Golden Anniversary of the Eucharistic Congress and the first ever visit of a pontiff to India. It is also memorable for the soft opening of Bombay?? first ever flyover at Kemps??Corner. Later, it was officially named Dr. Gopalrao Deshmukh Uddanpul, but it is still referred to as the Kemps??Corner Flyover. We lived on the third floor of the building which now houses Crossword. We watched it being built in the mid-60s, a unanimous objection was that the beautiful tree lined road was to give way to an elevated concrete road which would invade our privacy ??sure enough our first and second floor neighbours were compromised.

As the bridge was being built, familiar landmarks were torn down to rubble. The bus stops were moved away ??till then the southbound stop was next to our building and the northbound stop was smack opposite; a single decker also rolled down the road which led?? to the Hanging Gardens. How much more could our lives change? Standing on the third floor balcony my uncle could see the bus which would take him to Andheri approach; the bus and he would get to the stop together! The flyover was the precursor of dramatic changes to the once quiet neighbourhood. Except during the morning and evening which was referred to as?? the ??ffice rush?? In the early 1960s, the flyover was necessary because of traffic jams, as it was an intersection of five roads: August Kranti Marg, Pedder Road, Hughes Road, Altamount Road and Ridge Road.

Two uncles, who were civil engineers, would comment on the work in progress; they explained the intricacies of pile driving, the crushing of stone, the building of a pillar, the mixing of concrete and finally why a spread of metal sheets were put in as joints. One day, we saw truckloads of cement bags continually diving over the bridge at various speeds, sometimes a row from one end to another, sometimes both ways. That?? for testing the load bearing ability and strength of the pillars and the bridge, an uncle explained. For months, the sound of drilling, the chug and whoosh of the pile driver and the crunching of the stone crusher became the only sounds we heard; replacing the bird sounds and the peacock?? call which we were so accustomed to.

It was November 1974, and suddenly activity increased sometimes going on late into the night.?? The bridge had a soft opening; the Popemobile carrying Pope Paul VI were the first pair of wheels to traverse the smooth paved road. It was also our first exposure to TV and film crews as a jeep or two with camera crew preceded the Pope?? motorcade. Crowds lined the route to cheer the pontiff, our Catholic servants went to their knees in reverence as the motorcade passed by. The end of the Pontiff?? visit signaled the return of the work gang.

A few months later, the flyover was declared open and the state cabinet and other dignitaries drove up and down the flyover. Followed by a rush of cars taking their first runs. The flyover became the city?? tourist attraction and flocks of pedestrians started walking the length. Very soon two policemen were posted on either side of the bridge to deter pedestrian traffic. A group of youngsters took advantage of the road from Hanging Gardens at midpoint, they would split into two groups and run in opposite directions; the havaldars, then clad in blue half pants, with puttees and sandals had a tough time chasing them.

Since we lived on the third floor, we had the best view. Kemps Corner has always been VIP thoroughfare. So each time a visiting dignitary arrived, family and friends would converge at our place and jostle for space on our balconies. The bridge made it an even more vantage point. There came a time when some of us would have to watch the motorcade from the roadside. The times we had a capacity house was when Queen Farah Diba was to drive past and I suddenly found myself with a new clutch of friends in college all vying for a place on my balcony; and later during Prince Charles??visit.

It was Bill Clinton?? visit which brought the Kemps Corner Flyover again into sharp focus, when it was closed to traffic 24 hours before his arrival for surveillance and as a VIP route. Chaos was rampant, cars were at standstill for hours, snaking down the service roads at a snail?? pace. So whoever thinks that they could demolish this priceless thoroughfare and replace it with the new elevated road which will span Haji Ali to Babulnath or beyond should think hard, what will happen to the traffic while the other one comes up.

The flyover also brought its share of misery. Passersby found a new wall to relieve themselves. Our neighbors on the first and second floors who were left with little or no view had to also endure the stench. However, one neighbor hit on a solution. It was regular sight for the burly gent rushing down the stars with walking stick in his hand and he would sneak up from behind and wallop the miscreant, or else he used his trusty air gun and stung the bare derrieres.??????????

The flyover was the location for countless film shoots, in fact earlier the Handing Garden road provided an apt slope for our bouffant heroines to run down for a song! Many a potboiler had its chases start in Singapore and end at Kemps Corner! Or Anil Kapoor dancing up and down the flyover. The maids in our building were a star struck lot. During a daytime shoot for Suhag with Amitabh Bachchan and Shashi Kapoor one maid burnt that night?? dinner and another singed some clothes. The nocturnal shoots are even worse for the next morning with your cup of tea you got the lowdown on the previous night?? shoot. Kundan Shah?? seminal Jaane Bhi Do Yaaron has a most outrageous runaway coffin sequence shot under the bridge.

When Mumbai?? second flyover was being built which connected Marine Drive to Princess Street, it wasn?? without incident, as part of it collapsed while still being built. Our neighbourhood lore had it that the Kemps Corner Flyover will outstand all as it has been blessed by the Pope! I dare any other flyover to match the good old Kemps Corner Flyover.