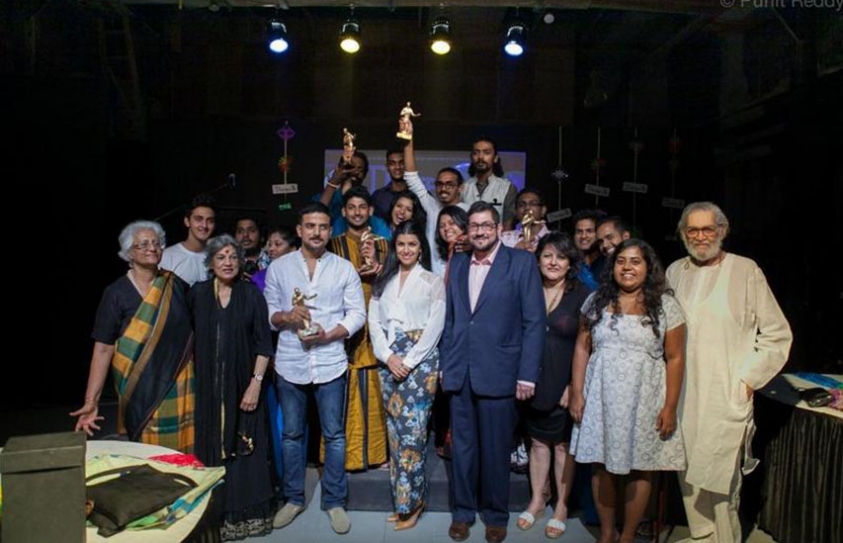 Mumbai, December 21, 2014:
After a dream run over the last 6 days, Thespo 16 paved its way to its final day. The most sought after theatre youth festival centered on the theme ‘Plug-In to the Tamasha’ offered an unmatched blend of plays, live performances, workshops, book readings, film screenings along with an infectious youthful buzz. Six exciting days gave way to the much awaited Awards night that honoured and acknowledged excellence in theatre. Besides who’s who of the theatre world, Bollywood actress Nimrat Kaur graced the occasion. 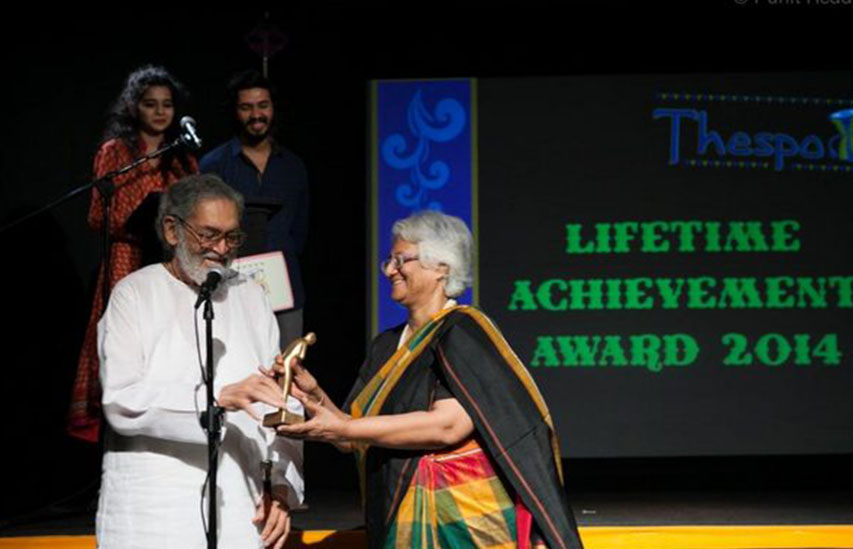 Among the young theatre artistes below 25 years who anxiously awaited the results , the cast of Walking Path from Stages Theatre Group received the award for Outstanding Ensemble from theatre veteran Farid Currim. Bollywood Actress, Nimrat Kaur stepped forward to present the Outstanding Male Actor award to Yogendra Vikram Singh who played Peter Kurten in Normal. It was Jayampathi Guruge who bagged the Outstanding Director award presented by Dolly Thakore. Vice president, Theatre Group Bombay presented the Deryck Jeffereis Award for Outstanding Production Design to Walking Path. Before the night drew to a close, the last and final award of the night, the Sultan Padamsee Award for Outstanding Play went to the talented – Walking Path from Sri Lanka, presented jury member, Saumya Ancheri.

The anchors took the opportunity to extend gratitude to ‘Friends of Thespo initiative´ acknowledging those who came forward to support the financially struggling youth theatre. They also recognised this year’s sponsors – Consulate General of Canada, Goethe Institut, Alliance Francaise, Cactus Global and Furtados. Towards the end, a montage ‘Thespo 16 Film’ showcased some precious moments from across the seven day youth carnival. The Awards night was also paid tribute to some inimitable theatre gurus who passed away this year with a live performance by Meher Mistry who rendered Fields of Gold by Eva Cassidy. Thespo 16 bid goodbye to theatre buffs and the young theatre wallahs with a promise to return next year bigger, better and bolder in spirits.

The 16th edition of Thespo, the annual drama festival for theatre-wallahs below the age of 25 took place from 15th to 21st December 2014. The festival scoured through a record total of 186 entries from across India, Sri Lanka and Canada, to curate a fresh bouquet of 6 full-length plays, 6 platform performances and 7 fringe performances. Organized by QTP, under the aegis of Theatre Group Bombay, it brought out the best young theatre talent at two venues this year: the iconic Prithvi Theatre, which has been the home of Thespo since 2008, and Sitara Studio, the city’s latest indie cultural space that used to stage Marathi plays back in the 1970s. The festival, this year, was centered on the theme ‘Plug-In to the Tamasha’.