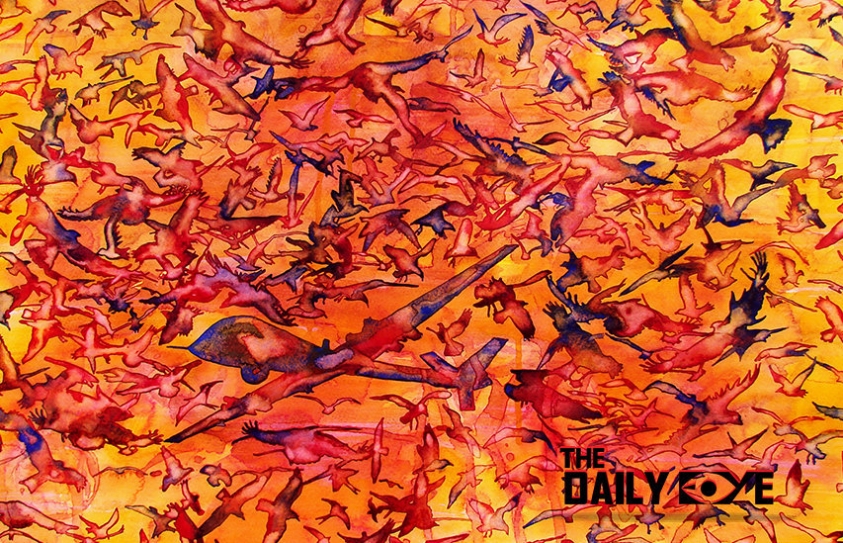 An Artist’s Political Awakening: From painting Moods of the Season to reflecting the Human Condition Today

Today, an Indian artist can’t venture into areas where angels fear to tread. Representation of goddesses,  nudity and politics of protest are de facto out of bounds. Majorly, too, the demand and supply of artworks is hinged on pleasant, becalming images.

Self-censorship has become overtly perceptible in contemporary art ever since M.F. Husain was compelled by right-wing forces to seek refuge in Qatar.

In addition, circa 2007, artist Srilamanthula Chandramohan, was charged at the age of 23 with obscenity for the paintings he submittted for his post-graduation degree at the Maharaja Sayajirao University of Baroda. In February this year, he set the office of the university on fire and has been languishing in jail since then. The art fraternity has had mixed feelings about Chandramohan’s extremism.

What you might ask does this have to do with my purported profile of Rajib Chowdhury, the Vadodara-anchored artist? Straight answer: his considerable oeuvre has been bravely under-layered with commentary on the after-effects of the political machinery on the human condition worldwide. In effect, here’s evidence that when a comment is  implied rather than being an incendiary, impetuous statement, art still cannot be cowed down.

In fact, the 47-year-old artist, born in Sodepur on the outskirts of Kolkata, is as mellow and reflective in person as his thought-enticing images. Wistfully, he recalls that his late father, Pradeep, was a civil contractor who was “not dishonest” and thus not suited to his chosen avocation. I point out that his story has shades of Hrishikesh Mukherjee’s Satyakam (1969) derived from a famed Bengali story by Narayan Sanyal. “Really? I’ve seen most of Hrishida’s films but not Satyakam,” he apologises. 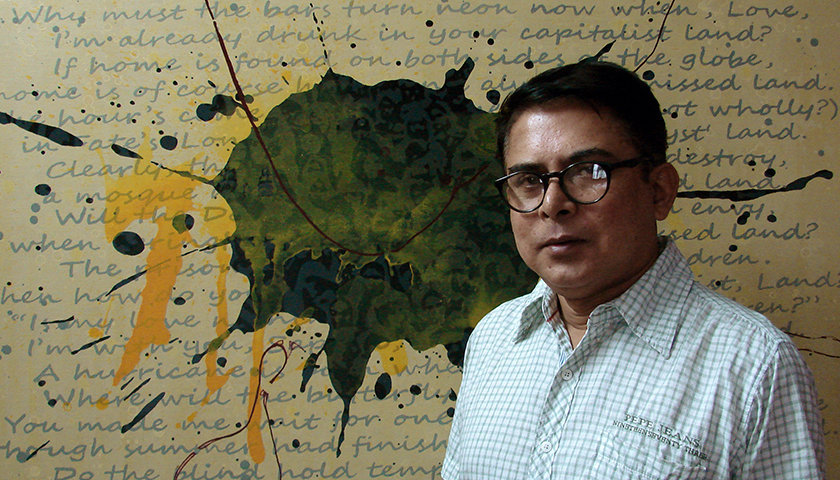 The father would have preferred Rajib Chowdhury to become a civil engineer. Yet by securing loans, he supported the son through high-cost art studies - at the outset at the Government College of Art and Craft in Kolkata, and then in graphics at the Maharaja Sayajirao University in Vadodara, the dream hub of artists. Santiniketan wasn’t an affordable option.

Two incidents of devastation have affected Chowdhury’s work. One the torching of a shanty colony, during the Gujarat riots of 2002, right outside Vadodara’s Sardar Nagar society, where he had rented a room. “I could hear the screams of children and women in the distance. According to most reports, the lawkeepers were mute spectators,” the artist narrates. “The sky was full of embers, it rained ashes right into my room.” 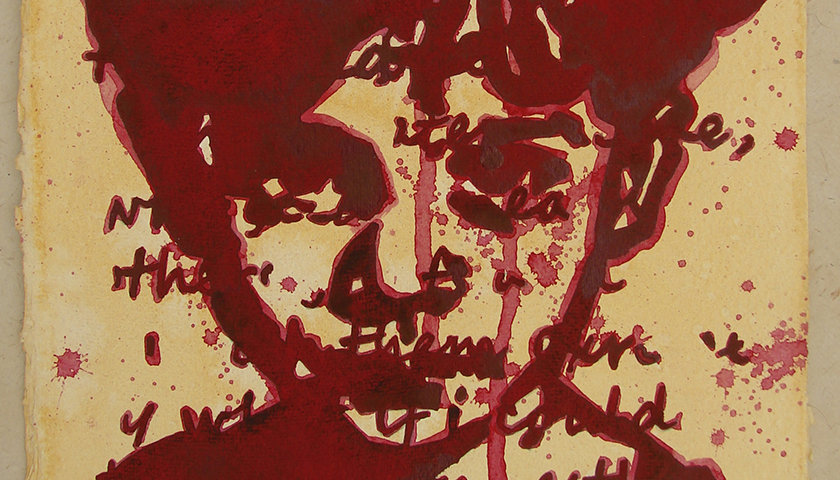 The second incident was the torching by rioters of the ancestral home of the nuclear physics professor, J.S. Bandukwala. A vocal political activist, the professor was sheltered for a while by a Hindu family. Subsequently, his daughter and he moved to the official accommodation for the university’s faculty. “That beautiful, heritage home continues to be in shambles,” the artist says quietly.

Over a decade and a half may have elapsed. Yet there’s a paranoia about saying anything vis-à-vis politics that could be misconstrued. “There is a polarisation of opinions, soch samajhke baat karni padti hai,” Chowdhury concedes. “That said, I would describe Vadodara as cosmopolitan and inclusive. Artists have settled here from different

far-flung states, and the tendency is to focus more on our work than to engage ourselves in wasteful debates and arguments.”

I point out that the pre-eminent artists, Gulam Mohammed and his wife Nilima Sheikh had to leave the city for a while but have resettled there. “They’re very much a vital part of our lives in Vadodara,” he remarks, adding that Gulam Mohammed Sheikh was awarded the title of Padma Bhushan, four years ago.

To prevent our conversation from wading into the murky waters of political dialectics, I ask him for a self-appraisal, as an artist, to which he says with a blush, “After 18 years, I can only say that I’m evolving and hopefully, maturing. My early work was apolitical, there was a romantic disposition – as in my show Malhar depicting the seasons, in 2004 at Mumbai’s Jehangir Art Gallery. With time and exposure to more news on the Internet and social media sites, there has a been a deeper awareness. For instance, I can’t turn myself away from the unrest in the Kashmir valley and the deaths of hundreds of innocent children in the skirmishes.”

The awareness has manifested itself in his striking images of close-ups of children from the beleaguered valley as well as images of those in Syria and Palestine. Plus, he has employed metaphors: visuals of a dangling chandelier, a grand piano and a rocking horse placed against the backdrops of scenes of unrest.

He cites the names of Mumbai’s Atul Dodiya and Nalini Malini, Syria’s Tammam Azzam (now based in Dubai)  and Palestine’s Mona Houtom (now located in London) among the contemporary artists he admires. Of the European masters he’s exultant about Francisco Goya, Gustav Klimt, Vincent Van Gogh and Marcel Duchamp (in particular his Nude Descending a Staircase, No. 2) and Henri de Toulouse Lautrec.

Apart from galleries in India, Rajib Chowdhury’s artworks have been exhibited, thanks to the efforts of  London’s celebrated writer-curator Shaheen Merali, at shows in Berlin, Vienna and Weimar.

Yet as in the case of a majority of Vadodara’s established yet under-publicised artists, it hasn’t exactly been cushy life for Chowdhury. The struggle to reach out to a wider audience and gallery spaces persists. Among the most cherished ones for Indian artists, at home, he selects the Chemould Prescott Road, Project 88 and Sakshi of Mumbai, and the Vadehra Art Gallery of New Delhi.

Throughout our interview on a rain-lashed afternoon in Mumbai, I notice that Chowdhury smiles rarely and looks melancholic. The four gem-stone rings on his left-palm’s fingers, he wears, are “not because I believe in luck, but because my mother and sister insisted that I should wear them.”

Getting a bit personal now, I ask if there’s a sense of loss within him. To that, he responds, “Yes perhaps. My sister was widowed at an early age. My father passed away some years ago, he could never be as financially secure as a son would have wanted him to. And maybe there’s a sense of loving someone for nearly 11 years and then losing her. Since she was from a Gujarati family and I’m a Bengali, it wasn’t to be. That loss, if may say so, is tempered with a feeling of freedom.”

Not loneliness? “An artist can never be lonely, can he?” Chowdhury retorts. “He can express himself through so many mediums – oils, acryclic, digital, crayons, chacoal or just a pencil drawing.” 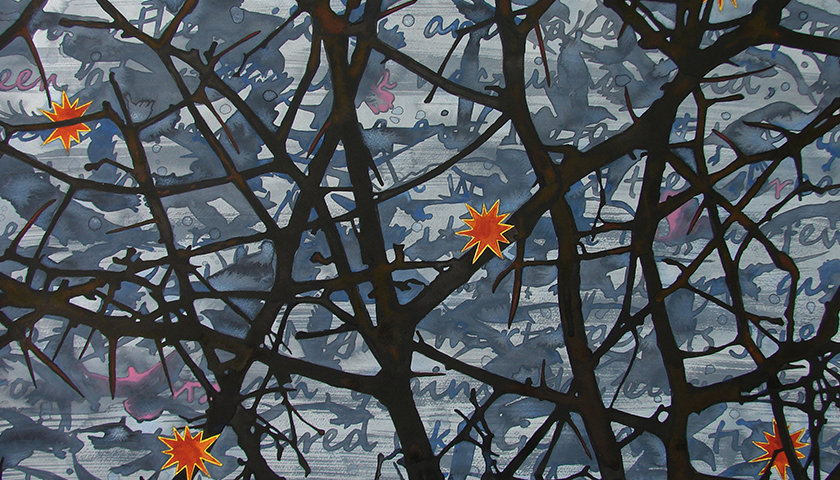 Lost in paradise-VIII 2018(Watercolour on paper)

I don’t know where this question is coming from. Intuitively, I ask him whether he has any recurring dream? Without a pause, the softspoken artist answers, “Over the years, I’ve repeatedly seen lots of snakes, some of them white, surrounding me in a room.  They aren’t harmful, they don’t bite. And frequently, I see myself running after a train

which has left the railway station. My luggage is inside and I want to retrieve it. For good or bad, perhaps that’s an artist’s burden of dreams.”