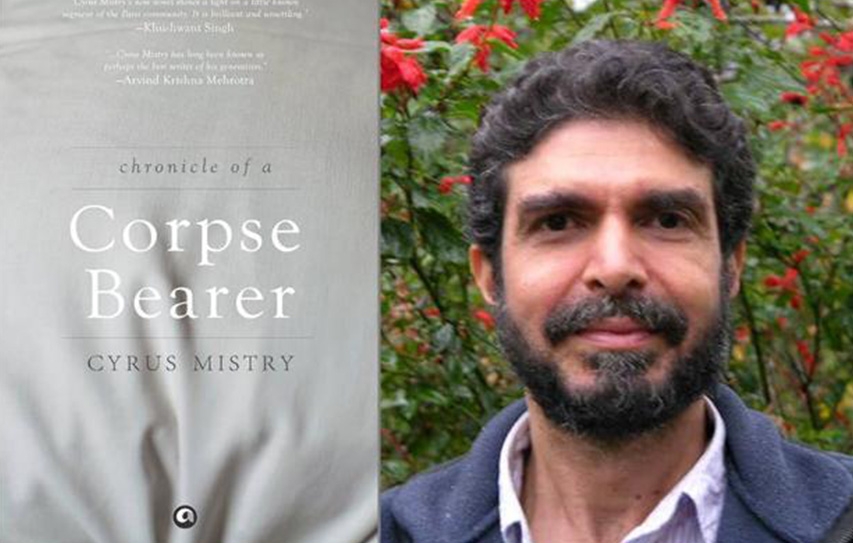 Author Cyrus Mistry trounced competition from five other writers to become the fourth winner of the $50,000 DSC prize for South Asian literature, for his book Chronicles of a Corpse Bearer. The prize is awarded to the best work or translation of a work on or about the South Asian region. Mistry received the award at the Jaipur Literature Festival from Gloria Steinem.

Cyrus Mistry is a writer in seclusion, unlike his sibling Rohinton Mistry. When I was checking biographical details, for the review of Chronicles of a Corpse Bearer, a Google Search proved frustrating. It was a case of mistaken identity as he shared the same name as Cyrus Mistry the man who was then plummeted into public eye as Ratan Tata’s successor. An unassuming, reclusive wordsmith, Cyrus Mistry is a writer from whose pen flows vivid imagery and fluid prose.

At age 21, Cyrus Mistry coveted recognition for his play Doongaji House with the Sultan Padamsee Award in 1977, much before big brother Rohinton Mistry earned his stripes for Such A Long Journey. One of Cyrus’ short stories was made into a film Percy, for which he won the National Award for the Best Script for a Gujarati film. Unfortunately, his first novel Radiance of Ashes went unnoticed largely thanks to indifferent marketing. It is with his second novel Chronicles of a Corpse Bearer, that Cyrus Mistry makes reappearance.” I would love to add now that Cyrus is here to stay. But he has plans to retreat to Kodaikanal, where he is the writer in residence.

In 1991, Cyrus was commissioned to research a documentary on the khandias/corpse bearers who live around Doongerwadi (the Towers of Silence of Mumbai) where the Parsis-Iranis carry out their funerary rites. The process of research allowed the writer not only a glimpse into the rites of passage, but also an entry into the lives of these families and their stories. It is one such story that forms the germ of Chronicle of a Corpse Bearer.

Mehli Cooper, a young dock worker fell in love with the daughter of a khandhia; he could marry her only if he forsook his early life and become a khandia. Mistry heard this story from Mehli’s son Aspi, a successful bookie at the racecourse. Mehli is also purported to have called a strike among the khandhias; although no mention of it exists in the records of the Bombay Parsi Panchayet, Aspi, a young boy then had some memory of it. Mehli albeit came out a quieter and subdued person. From this seedling plot and Mistry’s research emerges a telling narrative of a group of people who live on the fringes of a shrinking community.

The protagonist Elchi (Phiroze Elchidana), the son of an esteemed Parsi priest, narrates his life story growing up in deeply religious household, a non-achiever at school, falling in love with Seppy (Sepideh), the daughter of a khandhia, giving up his family to marry her, only to lose her soon after their daughter Farida is born, to an untreated cobra bite.

Being a group of humiliated outcasts, the khandhias have no rights; they put in unreasonable working hours and earn very little money. The book also narrates an equally attention-grabbing story of a revolt by Elchi and his co-workers against the Parsi Panchayat demanding more humane treatment. Chastened by the Panchayet, Elchi lives the rest of his life as a shadow of his former self. The narrative runs parallel to events which were a precursor to India’s independence, with well placed descriptions of morchas, etc.and the nocturnal theft of electricity to hear the news on a battered radio.

The second half of the book intertwines an amusing and touching incident concerning the funeral of a cancer patient Joseph, born to a Parsi father and a Christian mother, who upon realizing that his end is near, seeks release through a Zoroastrian funeral. The ensuing turmoil that this creates amongst the Parsi community, the Panchayat, press and the khandhias is a unintended highlight of the book. It’s eventual outcome rings true of the community even today. Furthermore, Mistry also reveals the abhorrence that Elchi’s father bore towards his father-in-law. A subplot of familial vengeance emerges, well played out, with subtlety; with the retrieval of a lost treasure – a pair of ruby earrings.

Two places in the narrative stand out for black humour. The first is when Phiroze Elchidana and three other corpse bearers are making their way to the Doongerwadi, Elchidana faints and the corpse topples over. The other is when a young Phiroze ties the family’s pet parrot to a string to fly him like a kite round the room. The kidnapping of a corpse and its final internment in a cemetery are likely to evoke a smile.

Cyrus Mistry’s narration blends measured doses of black humour, irony and tragedy. His characters are real people, and stay with the reader way after the last page has been turned. His description of Doongerwadi’s sylvan surroundings almost urges one to go on a nature walk and look for Elchi and Sepideh’s hideout.

Chronicle of a Corpse Bearer is a telling book, which not only bemoans the chasm created amongst mankind thanks to society’s wanting to cling on to tradition; it also tells a disturbing story of those people who live on the periphery of an alarmingly shrinking community.

With three honours to his credit, a Google Search revealed Cyrus Mistry (Writer) with a Wikipedia profile. Brief like the reticent writer.