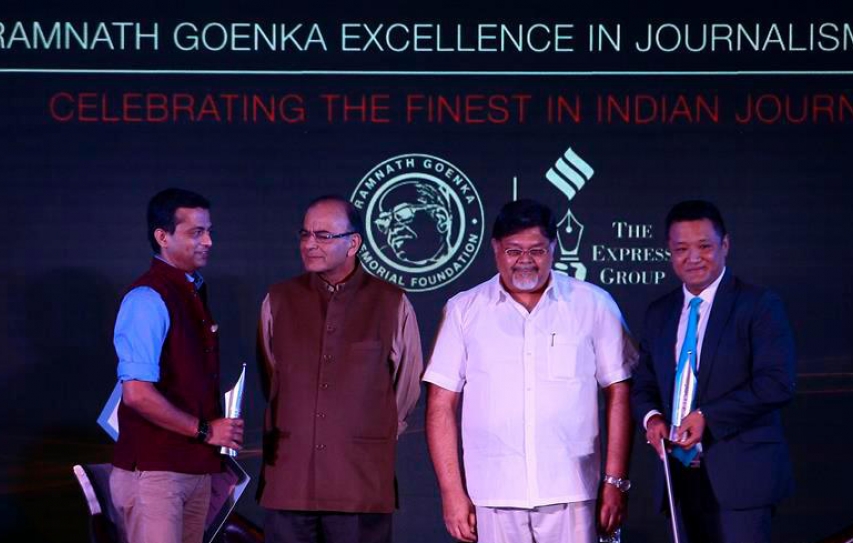 New Delhi, 23 November 2015: CNN-IBN, India’s Most Awarded English News Channel, was once again recognized for its exemplary journalism and bagged 3 awards at the prestigious Ramnath Goenka Excellence in Journalism Awards at a grand ceremony held on Monday, 23rd November 2015, at ITC Maurya, in New Delhi.

Karma Paljor (Senior Editor) won the award in the category of ‘On the Spot Reporting’ for his coverage of Cyclone Phailin in the year 2013 while Deepa Balakrishnan (Bureau Chief – Bengaluru) was awarded in the category of ‘Reporting on Politics and Government’ for exposing the nexus between mining and politics against the backdrop of the impending elections in the state. Marya Shakil (Senior Associate Editor) bagged the award in the ‘Reporting on Politics and Government’category for her outstanding coverage of the General Elections 2014. The awardees were felicitated by Chief Guest Shri Arun Jaitley, Honourable Minister of Finance, Corporate Affairs and Information & Broadcasting.

Commenting on this, Avinash Kaul, CEO, IBN Network & President, A+E Network | TV18 said, “At CNN-IBN, we hold ourselves to the highest standards in terms of journalistic excellence. Our teams constantly push the envelope to bring content to our viewers that is relevant, insightful and impactful. It is thus heartening and humbling to be recognized for our work.”

Ramnath Goenka Excellence in Journalism Awards are one of India’s biggest and most prestigious awards. These awards recognise print and broadcast journalists, who do stories that create a far-reaching impact. Started in 2006 to honour the late Ramnath Goenka, freedom fighter and founder of The Indian Express Group, these awards acknowledge accuracy, courage, credibility and fairness in journalism, and honour the best and the brightest in Indian media every year.