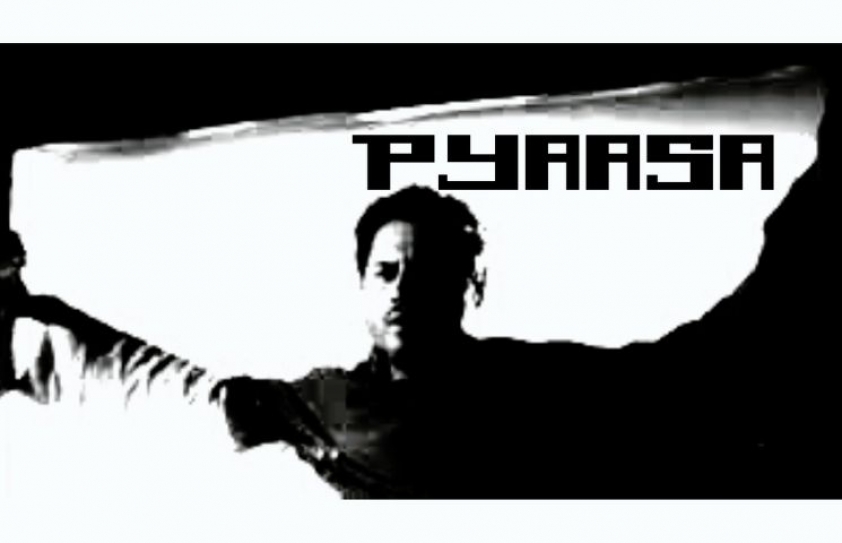 This was written during the years, to be precise 2017, when playing the national anthem before movies was mandatory in halls, writes Juhi Saklani

An auditorium, about three quarters full of people, stands solemnly as the National Anthem plays before a film club screening of the film Pyaasa in a Delhi cinema hall. Later, halfway into the film, the audience sits and watches an elegy unfolding - if an anthem is a rousing celebration, Jinhe Naaz Hai Hind Par, Wo Kahan Hain (Where are they who take pride in India) is just the opposite - an elegiac expression of grief. A stunned hall breaks into applause at the end of the song.

A few reels later they hear the most pristine articulation of a politics of having no stakes in the status quo: Ye duniya agar mil bhi jaye to kya hai (So what if such a world becomes mine?). The breathless events towards the end of the song give no one any space to clap, but even after the sequence is over there is a pause in our collective souls. How to imagine the resolution of a story once its protagonist has rejected everything, in particular success, wealth, and social status?

The by-now well established reading of Pyaasa (1957), sees it as a disheartened allegory of young heroes being let down by the nation after nearly 10 years of independence and failed promises - or at least as a story made possible in the context of such a failure, although it’s worth remembering that Guru Dutt wrote the original story, Kashmakash, on which Pyaasa is based, in 1947/48.

Unemployment, hunger, inequality, women forced to sell their bodies, lack of compassion in society, and greed for money and power are some of Pyaasa’s leitmotifs. Today, thanks to the exigencies of legally enforced symptoms of nationalism (the Supreme Court having made it compulsory for the National Anthem to be played before movie screenings), we get the remarkable cinema hall experience of moving from a National Anthem written before independence, celebrating the destiny of the land, to the realities of the nation as recorded by sensitive observers in the 1950s, to the fact that none of Pyaasa’s frustrating themes have become dated after 60 years of the film’s release. Jinhe naaz hai Hind par, wo kahan hain?

It does not feel ironic any more. After all, the time for irony is already well past once a nation adopts as its anthem the song of a poet who said that he was ‘against the general idea of all nations’. And, who wished to fight against ‘the education, which teaches (people) that a country is greater than the ideals of humanity’. 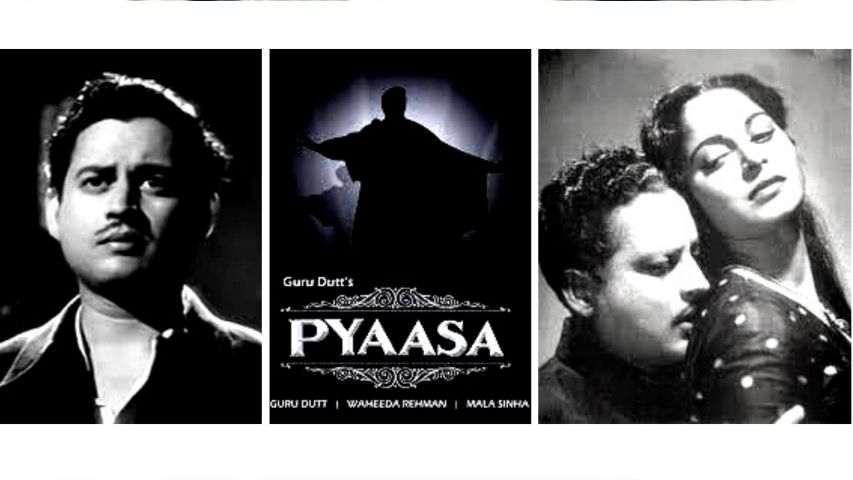 As Pyaasa unfolds, we see that unemployed and the unsuccessful poet-hero Vijay getting to speak very few dialogues in the film - the many silent moments of his character being lovingly drawn out as if in a lyrical cinematic dream. When Vijay does have something to articulate, he does so through poetry and song. In that sense, Sahir Ludhianvi’s verses are as much ‘dialogues’ of the film as screenwriter Abrar Alvi’s lines.

Guru Dutt’s erstwhile assistant, the director Raj Khosla recalled in an interview that when Guru Dutt first heard the lyrics of Jinhe naaz hai, he was moved and excited, and he had said, “This is it! This is Pyaasa". Poet Sahir Ludhianvi had written the lacerating critique in far tougher language in his original poem Chakle (brothels). The line went: Sana khwane taqdis-e-mashriq kahan hain (Where are those who eulogized the greatness of the East), which were softened to Jinhe naaz hai… for the film.

If Tagore’s anthem invokes the vast subcontinent’s geography - Punjab, Sind, Gujarat, Maratha - its rivers and the waves of its seas, Pyaasa’s counter-anthem turns to intimate geographies of exploitative, oppressive by-lanes (kooche) in Sonagacchi - Calcutta’s red light area. It describes the auction houses of seduction (neelam ghar dilkashi ke), the fearful lanes (sehmi si galiyan), and the soulless rooms (be-rooh kamre). The National Anthem is rich with Jai (victory), mangal (well being) and ashish (blessings). The counter-anthem speaks of insan ke dushman samaj (a society that is an enemy of humanity) and har ik rooh pyaasi (where every soul is thirsty). Take it away, cries the poet pointing to the world (mere saamne se hatha lo ye duniya), his angst climaxing to the most simple, most powerful lines written for Hindi cinema: Ye duniya agar mil bhi jaye to kya hai? 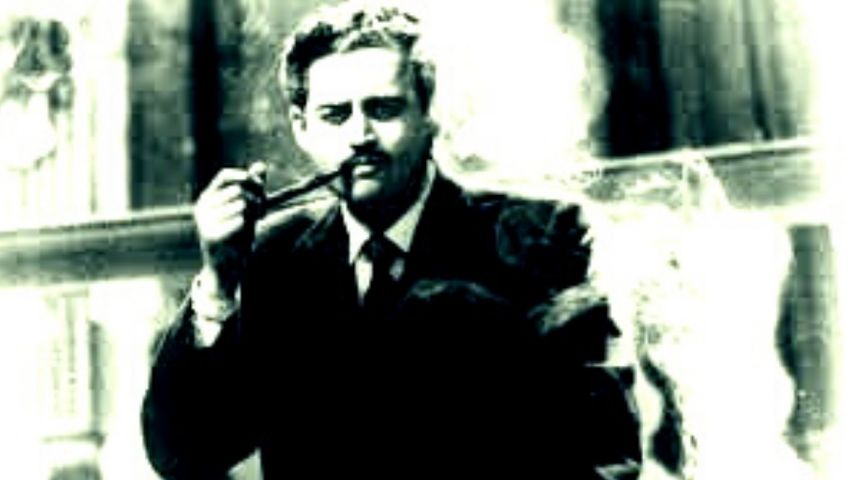 The two critical songs, left without any but the minimal orchestration by SD Burman, came to define Pyaasa well beyond the first run of the film, forever inscribing Guru Dutt as a tortured sensitive soul for whom the world was too corrupt. But, Ye duniya agar… is much more than a critical song. Read along with what happens in the film, it is that radical moment when ‘all that is solid melts into air’ - after all how many times have we seen an underdog protagonist in a film that finally finds recognition in a cinematic ‘happy ending’, reject all the adulation, success and wealth coming his way? “I am not the Vijay you are celebrating”, announces Vijay in public and walks away from it all.

He rises above the happy ending (just as Waheeda Rehman's Gulab ascended above the security provided by her life’s savings, in order to get his poems published after she heard the rumor of his death). Vijay’s walking away - his having no stake in the perpetuity of such a world - is a radical and creative act in itself. Writer Abrar Alvi did not agree. It felt escapist to him; he wanted Vijay to stay and fight. And anyway, he argued, ‘where is it that Vijay and Gulab could go away’ from such a world? 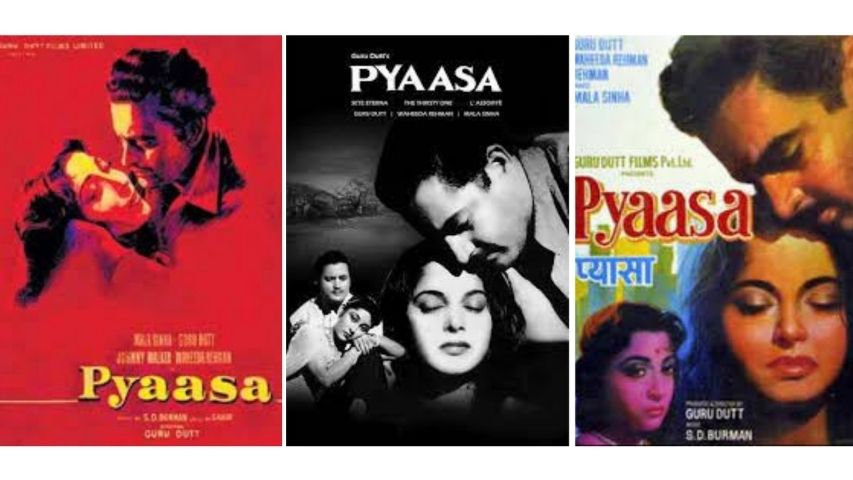 The truth is that Vijay and Gulab’s transcendent incorruptibility and fearlessness in withdrawing from the world is akin to having already rendered an alternative world real. The counter anthem opened up radical possibilities. We see what exists with such shining clarity. There is sadness in hearts and thirst in souls and we thoroughly reject it. It is only with such a clear-eyed understanding that the alternative world becomes possible, whether ‘far away’ or ‘here’.

Vijay and Gulab are creating a world of integrity and humanity in their very existence. It is a world in which a barber can make this radio announcement: “Look up Hannah! The clouds are lifting, the sun is breaking through… we are coming into a new world… The soul of man has been given wings and at last he is beginning to fly” - The Great Dictator.

In fact, it is a world, which can be found in the third stanza of Rabindranath Tagore’s lengthy song Bharot Bhagyo Bidhata, which lent its first few lines to the Indian nation-state. As Vijay and Gulab walk into the sunrise, it is Tagore, the poet of nature and worshipper of the formless, who describes what is happening: “The night fades, the light breaks over the peaks of the Eastern hills, the birds begin to sing and the morning breeze carries the breath of new life…”