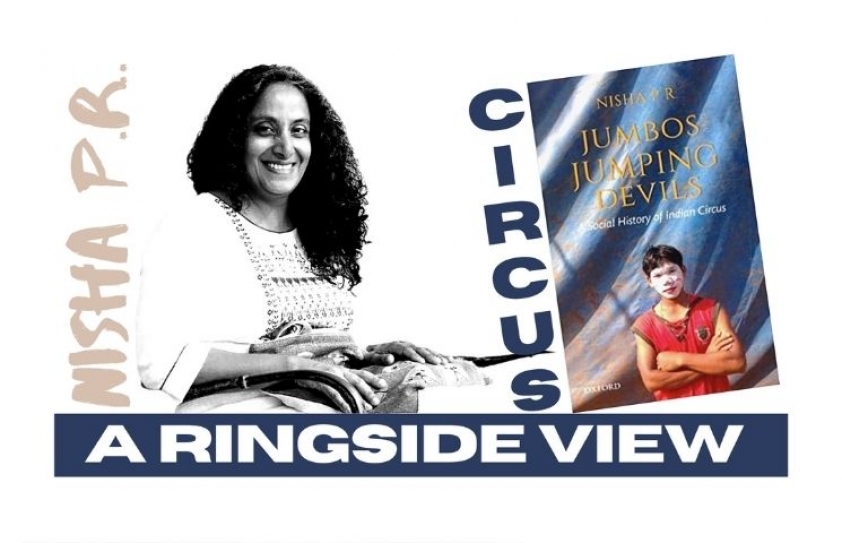 Janaky Sreedharan writes that to read a book on circus is, in a way, to revisit our childhood - to recall the color, joy and awe of incredible movement.

To evoke those leaps, rides, jumping through fire hoops and swinging through air to the rhythm of lively music and clownish capers.

There are those memories of sleek and nimble human bodies unfurling in their entire magnificent splendor. It nudges the remembrances of a primal past through the interplay of humans and animals. The magic of the circus tent and the circus ring just on the outskirts of a city, in an open field or a town square conjures the seductive charm of a carnival. The tiny state of Kerala has always had a special connection with circus, with many Malayali fables woven around this arena as Kerala’s gift to the Universe.

But then, to write about circus could well be an altogether different game. As Dr. Nisha P.R. would affirm, with her book Jumbos and Jumping Devils published by the Oxford University Press hitting the stands, making an innovative move in chronicling the Indian circus story. The global OUP describes her book as “one of the pioneering academic works on the circus industry in South Asia.” Adding to the corpus of existing literature on circus by people like Sreedharan Champad, Kandampulli Balan, Gemini Sankaran and Sreehari Nair from Kerala, Priyanath Basu from Bengal, Shyamala Shirolkar and Praveen Walimbe from Maharashtra, Nisha elaborates on the difference her book is trying to make to an untouched terrain. “Such a history has its significance while one understands that the history of the circus in South Asia itself remains unexplored.”

An awardee of many prestigious national and international fellowships, Nisha has published widely on her research area in many renowned academic journals, and is all set to join Yale University on a Fullbright fellowship to do Post-doctoral research on transnational history connecting India, Europe and America in the context of the circus and acrobatics dating back to the early twentieth century.

Circus is seen as a nomadic event as it is constantly on the move; but there have been particular places and societies, which have been literally the cradles of circus performances. So, when Nisha began penning a book on Indian circus, it also became a kind of homecoming for her, hailing as she does from Thalassery (also known as Tellicherry) the legendary hub of Indian circus. The book is not only a crowning moment of her thirteen year long research journey but also an impassioned ode to Thalassery, which in her words is “a showpiece” of colonial fantasy”. Nisha’s serious engagement with the circus began on a very personal note. Maybe all research should have such intimate origins to give us such committed work. The story of that beginning also tells us about the adventurous switch in disciplines that marks the growth of Nisha from a research scholar in English literature to a promising historian of the future. 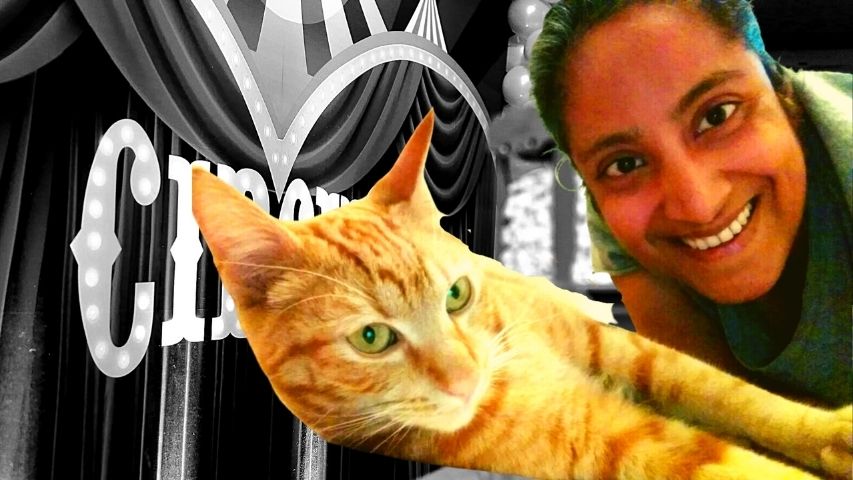 As an MPhil student way back in 2006, in the English Department of the Palayad campus of Kannur University, Nisha would reach her campus a little earlier than others. Her only companion would be Anita, a circus artist turned sweeper-on-contract, whose work was abruptly terminated as she did not possess the required formal educational qualifications. Nisha tracked her to her house only to discover that the same lady found to be lacking in basic qualifications was a polyglot and a skilled acrobat well versed in many physical skills. This incident awakened the researcher in Nisha and motivated her so deeply, that she veered totally away from her English  studies to pursue doctoral research on the origin and growth of circus in India. This search took her on a marathon jaunt across continents and to various parts of the country, interacting with circus companies, managers, artists, acrobats, trainers and activists.

The book quite intriguingly titled Jumbos and Jumping Devils derives its name from two significant icons in the history of circus. One is the Jumbo elephant from Africa that was a part and parcel of almost all circus shows in the imperial west. The other is the wonder boy ‘Kannan Bombayo’ from Kerala whose daring feats earned him the nickname ‘Jumping Devil’ from Adolf Hitler himself.

Nisha draws our attention to stalwarts in the field like Keeleri Kunhikkannan who is considered the father of Indian circus and was more of an iconoclast in the way he facilitated the entry of individuals from subaltern communities into the ring, thus overturning many caste bigotries. Circus kalari or training space marked a place, where the rules of caste distantiation were toppled and a new physical culture emerged by “recasting the body”.

Pained by the official neglect towards this amazing artist and teacher, Nisha submitted a proposal following which the Kerala Sangeetha Nataka Academy celebrated the 160th birth anniversary of Keeleri Kunhihannan in 2015. 21 Malayali circus artistes and labourers, both retired and working, were honored with a citation and cash award of Rs.10000 during these celebrations. And the road that led to his home was named after this circus warrior. Nisha’s words ooze a sense of fulfilment, ”This was the ﬁrst time in the history of the Kerala Sangeetha Nataka Akademi that circus artistes were recognized as performing artists and honored. This was an important episode of my journey towards the book and also a small gift to the circus town.”

Nisha traces the formation of trade unions in a field never addressed seriously as a workplace, even as the communist movement was gathering momentum in the state. This account alerts us to the blurring of the identities of the worker and the artist. More than just making visible an area of human action unattended by academia so far, she questions certain dominant paradigms of historiography. Having had to rely considerably on the personal memorabilia of the circus performers, Nisha comments on how she negotiated this paucity of archival material.

“It has been like they have created an archive of their own; the circus folk I have been meeting across India had admirably kept the photographs, notices, posters, letters, labor union memorandums and diaries. Memories and memorabilia of the circus community have been such rich sources for me. But of course, the statist archival materials like Census reports, Tellicherry Sub-Collector’s Office Records or Indian Office Records from the British Library were useful in not only with regard to circus humans but also helped me trace the historical trajectory of circus animals from colonial to postcolonial times.” 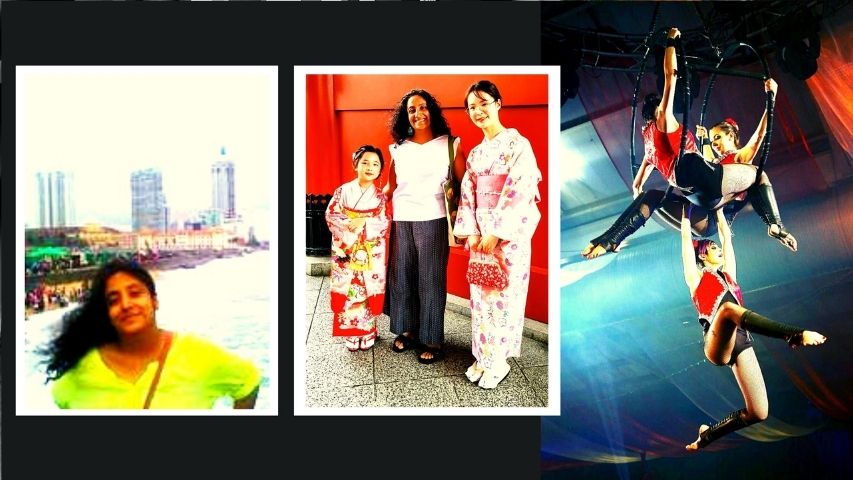 Out of this memory archive she curated ‘Indian Circus: A Photo Exhibition’ in the Nehru Memorial Museum and Library in 2013 (18-24 January). She also organized an international conference, ‘Circus Histories and Theories’ (21-22 June 2018) bringing international scholars researching on the various aspects of circuses globally, to Centre for Indian Studies in Africa, University of the Witwatersrand, South Africa where she has been a Social Science Research Council Transregional Fellow.

A glimpse into the symbiotic human animal relationship in the circus world brings in disturbing aspects of animal trade, captivity, training and cruelty. At the same time she urges us to see the relationship between the animal trainer and the animal as a very complex and complicated one, which does not lend itself to simplistic binaries.

The book seeks to track the several run-ins between the circus community and the state with regard to children’s rights as well; once again highlighting the tangled question of the child artist in the world of circus. Deeply rooted in the forms of popular entertainment born from the colonial womb, circus forms a connection with the concept of the zoo, which once again owes its birth to the colonial fantasy of the exotic other. Nisha finely teases out the ways in which different cultures get intermeshed in the transcontinental migrations of the circus performers - be they animals or human beings.

Nisha also tries to retrieve for us the exciting lore of the circus tent, which has been a witness to some of pivotal moments in the social history of Kerala. For instance you have this fascinating account of a Dalit woman (mentioned as Dalit by Kunnukuzhi Mani and Chentharassery, the two biographers of Ayyankali) who was the owner of a circus tent, which she is supposed to have offered as a space for the Peace conference after the famous Perinadu rebellion (also known as Kallumala samaram). It illuminates the intricate intersections of political and circus histories while underlining the decisive roles played by women particularly.

Reflecting on the way the book has shaped her even as she was crafting it, Nisha observes: “This research has directed my life and revealed to me what I am capable of, it has offered me the pain and pleasure of historical research. I have learnt from the constant moving tents and the wise circus people (many who have been travelling all their lives and are fluent in many tongues) what travels can offer me, I have understood how to treat animals as individuals. This research has taught me lots of humility but also to stand my ground.”