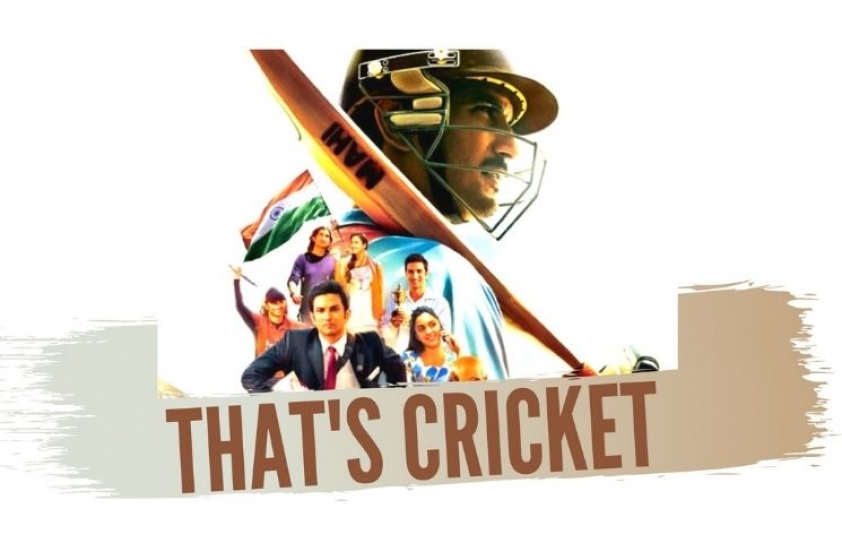 It’s no secret that cricket and Bollywood are our two prime sources of entertainment. Often my friends and acquaintances have been stuck in a dilemma to either watch a ‘live’ match on TV or a film. In fact, new film releases have been often postponed whenever an IPL season would kick off in full swing.

Another strong connection between cinema and the sport has been the fact that cricketers have at times, attempted to become actors. Salim Durrani made his debut opposite Parveen Babi in Charitra, Sandeep Patil was the main attraction of Kabhie Ajnabee The. Mohsin Khan fetched up in JP Dutta’s Batwara opposite Poonam Dhillon, Ajay Jadeja co-starred in Khel opposite Celina Jaitly, Salil Ankola was seen in Kurakshetra in the company of Sanjay Dutt. Sunil Gavaskar and Kapil Dev and Sachin Tendulkar have shown up in guest appearances.

Interestingly, a cricket sequence was a part of the Dev Anand-Mala Sinha vintage movie Love Marriage. In Malamaal, Naseeruddin Shah played a small-time cricketer. In Chamatkar, Marco the Invisible Ghost again enacted by Naseeruddin Shah played a hilarious cricket match with Shah Rukh Khan. In Patiala House, Akshay Kumar essayed a cricketer who joins England’s team against the wishes of his dominating father.

Plus there was Hum Aapke Hain..Koun! - The film in which a family outing meant a cricket match. In Kai Po Che, Sushant Singh Rajput was a district level cricketer who faces opposition from the politics-ridden selection committee. Apparently, there was another film starring Marc Zuber, Deepti Naval & Sayeed Jaffrey where Kapil Dev made a guest appearance named Cricketer (1985). Not quite sure if it had a theatrical release as it was undergoing some issues releasing it with NFDC as the producer; Mr. Vohra being an NRI was not being allowed to release the film in India.

According to trade experts, back in the 1960s right down to the new millennium, films based on the theme of sports were considered a jinx at the box office. This prejudice was broken by the whopper success of Lagaan (2001). Today, with the IPL fever on, then, here’s looking back at 11 films in which cricket was the prime focus. 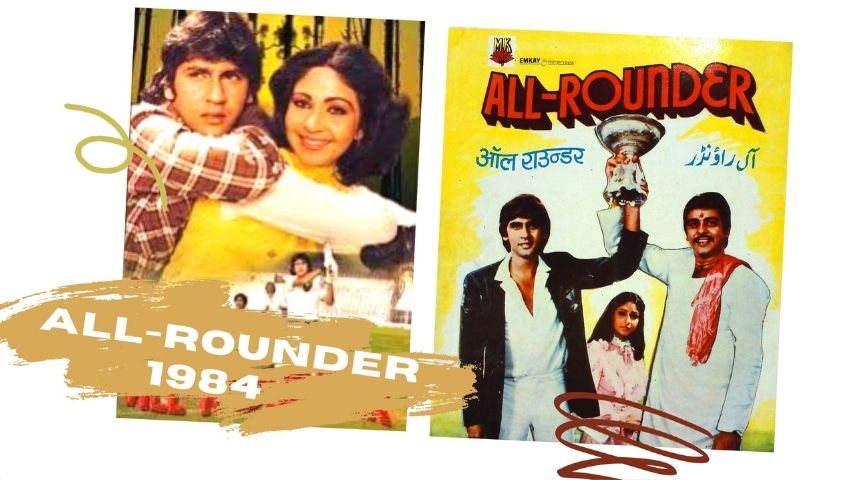 Produced and directed by Mohan Kumar, this one starred Kumar Gaurav, Rati Agnihotri, Vinod Mehra, Shakti Kapoor and Ramesh Deo. It was based on the   sacrifices of Birju to get his younger brother Ajay realize his dreams of becoming a cricketer. Finally, when Ajay manages to make it to the Indian test team at the expense of cricketer Vikram, the latter thirsts for vendetta. A typical formula endeavor, it tanked majorly. 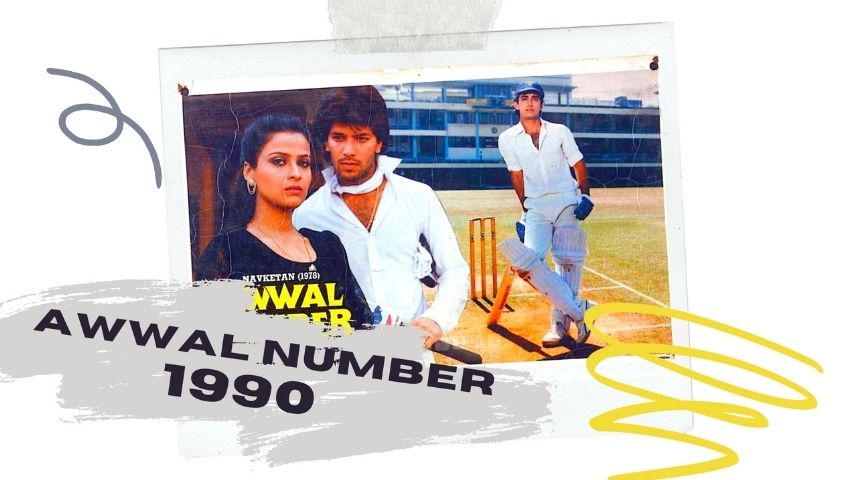 Directed by Dev Anand, the plot revolved on the simmering rivalry between two team players, Sunny and Ronny. Meanwhile, a terrorist gang plants a bomb in the stadium where a match is on between India and Australia. Heroics are called for to foil a mass tragedy. Dev Anand starred along with Aamir Khan, Ektaa, Aditya Pancholi, Neeta Puri, Parikshit Sahni and Bharat Bhushan. At best, it fared averagely at the ticket windows. Incidentally, a role had been offered to Pakistan’s champion cricketer Imran Khan, Now Prime Minister of Pakistan, who had refused politely. 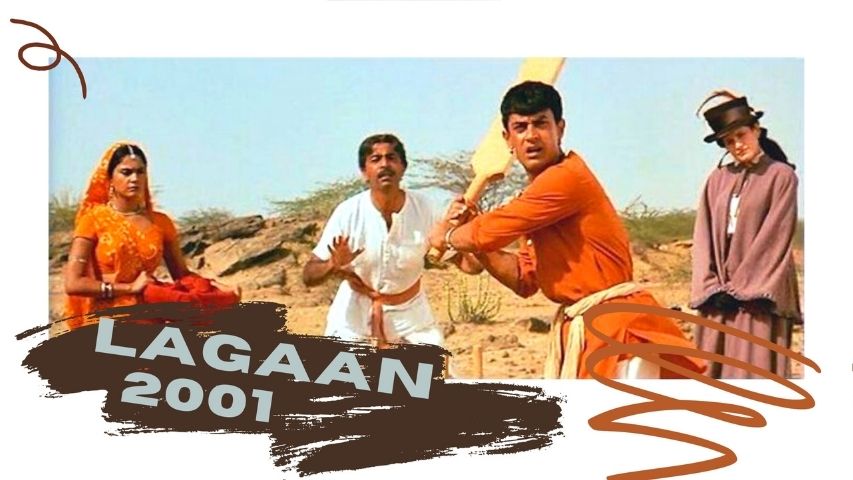 Director Ashustosh Gowariker’s iconic film, shot in Bhuj, was set in the era of the British Raj. The deft screenplay studied a group of rain-starved villagers of Gujarat who learn to play cricket in order to win a match against the British to avoid a draconian tax being imposed upon them. Led by Aamir Khan, this film was ironically rejected by Shah Rukh Khan, Abhishek Bachchan, Preity Zinta and Rani Mukherjee. Despite its lengthy running time with two intervals, the excitingly rendered finale was one of the contributing factors to Lagaan, which was short-listed among the Best Foreign Language Academy Awards. 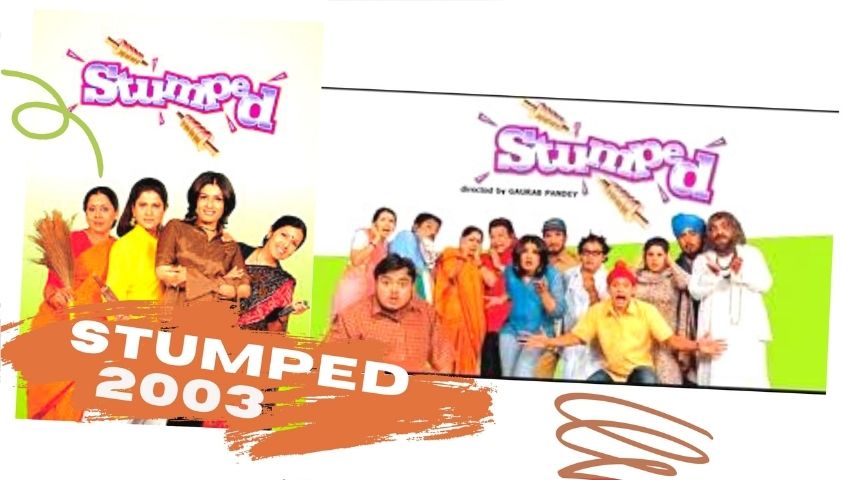 Produced by Raveena Tandon and directed by Gaurav Panday, the story dealt with residents of the Happy Home Society who share a passion for watching and playing cricket. Against this backdrop, Raveena as the heroine overcomes her isolation after her husband Major Raghav Seth is called back to the Kargil war front. The supporting ensemble comprised Aly Khan, Suresh Menon and Anjan Shrivastav. Although backed by Salman Khan, the effort was a no-no at the cash counters. 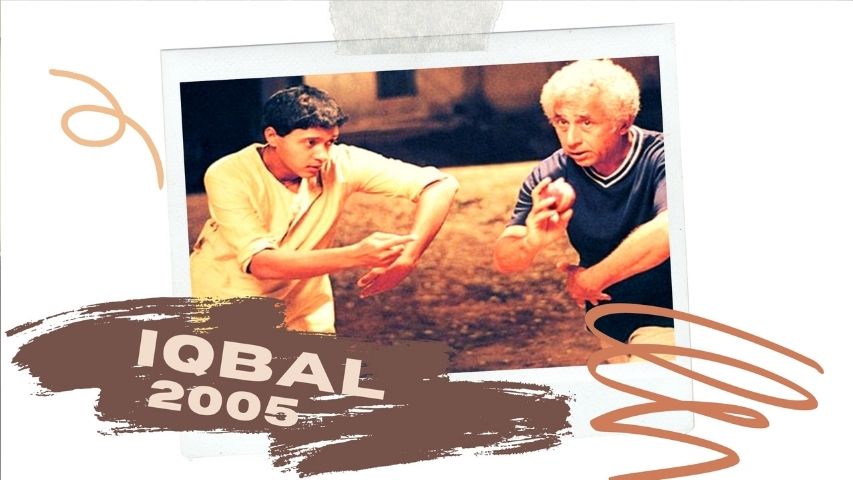 Here was a heart-wrenching story of the eponymous deaf and dumb boy who aspires to become a cricketer but is discouraged by his father who wants him to become a farmer in the tradition maintained by the family. Unfazed, Iqbal is coached by an alcoholic, former cricketer. Directed by Nagesh Kukunoor for producer Subhash Ghai, the surprise hit, which was also critically acclaimed, featured Shreyas Talpade, Naseeruddin Shah, Shweta Basu Prasad, Yatin Karyekar and Girish Karnad in key roles. It won two National Awards for  the Best Film on Social Issues and the Best Supporting Actor for Naseeruddin Shah. 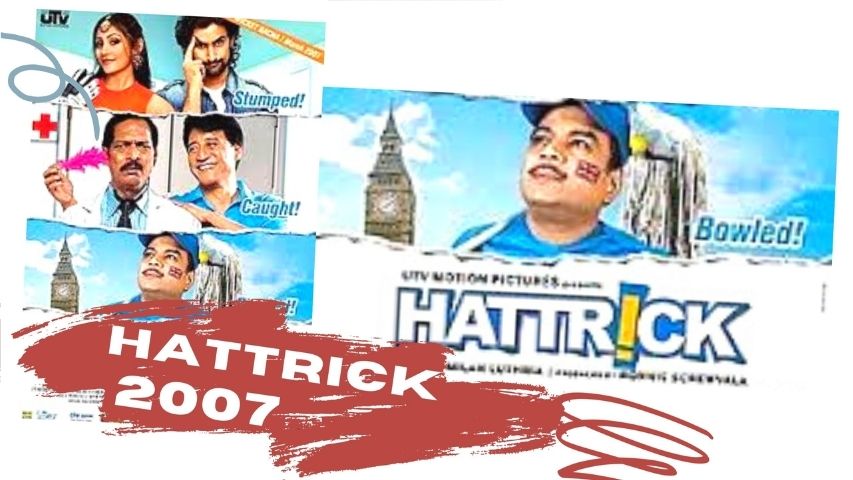 Directed by Milan Luthria, the spotlight was on Dr Satyajit Chavan, the curmudgeonly head of a local civil hospital. He hates cricket. However, there’s Sarbajeet Singh too, who is a die-hard fan of cricket but is married to a woman fed up with the sport since she is always neglected. Nana Patekar, Danny Denzongpa, Paresh Rawal, Kunal Kapoor and Rimi Sen played key roles in this reasonably humorous film. Unfortunately, it flopped. 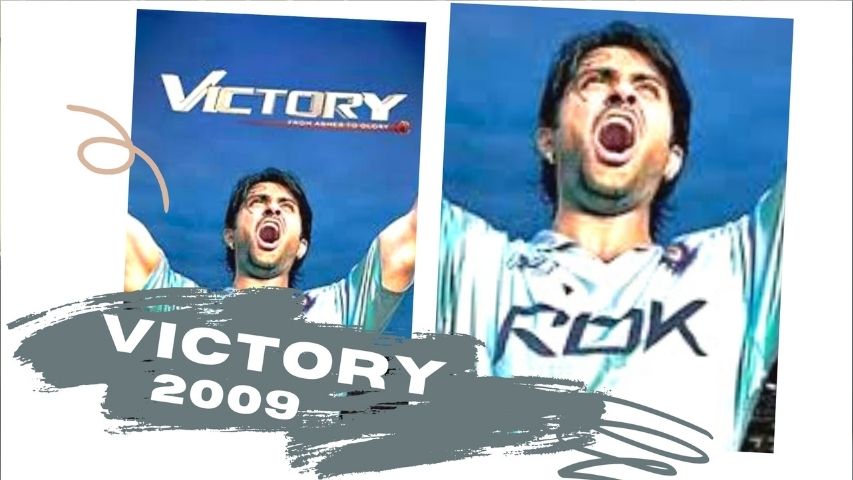 Here was a colossal dud starring Harman Baweja. In the role of Vijay Shekhawat, his dreams come true when he is selected for the Indian cricket team. However, with success on the field, he gets far too big for his boots. Just in the nick of time, though, he gets his act together and is back in the reckoning. Directed by Ajit Pal Mangat and co-starring Amrita Rao and Anupam Kher, the rather messy effort was rejected outright by the audience. 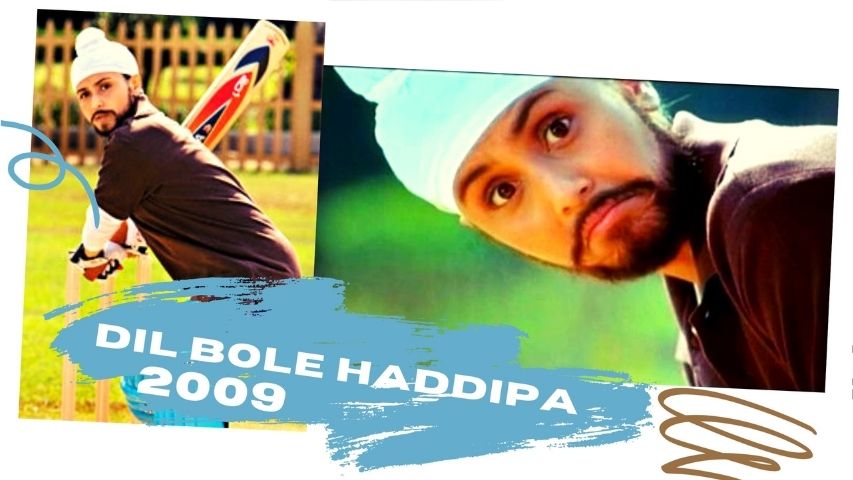 From the Yashraj banner, this quirky rom-com went gaga over Veera Kaur, who longs to become a national-level cricketer in the team comprising of men only. Hence she masquerades as a male sardar Veer Pratap Singh, on the day of the team’s final selection. Veera is selected, excels at the sport but loses her heart to the team captain. Ensue complications galore. A star vehicle meant for Rani Mukerji, it co-starred Shahid Kapoor, Sherlyn Chopra, Poonam Dhillon and Rakhi Sawant and toted up fair to middling business. 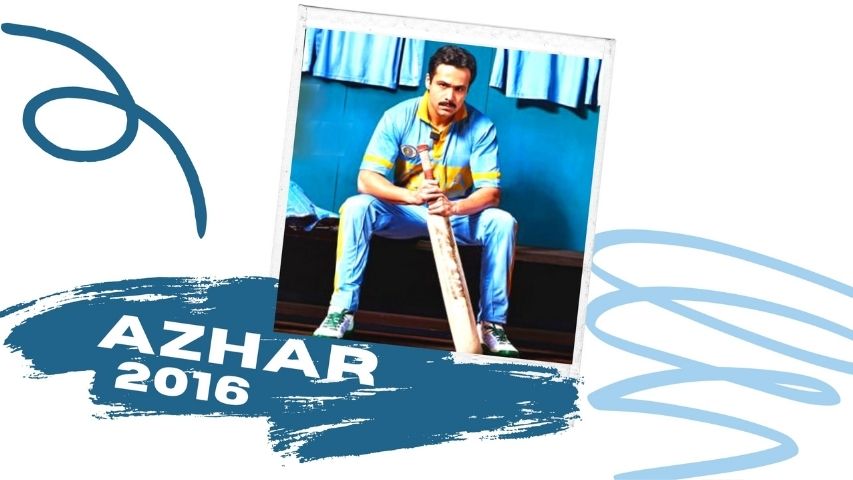 Directed by Tony D’Souza, this commercially upbeat biopic of the shamed ex-Indian cricket captain (on allegations of match-fixing) Mohammad Azharuddin, was notable for Emraan Hashmi’s sensitive portrayal in a difficult role. Supported by Prachi Desai, Nargis Fakhri, Lara Dutta and Kunal Roy Kapoor, some critics however, felt it was too much of a whitewash job. The music by Amaal Mallik and Preetam was chartbusting. Producers of the Alt Balaji banner had wanted Sangeeta Bijlani to play herself but she refused and the part went to Nargis Fakhri. 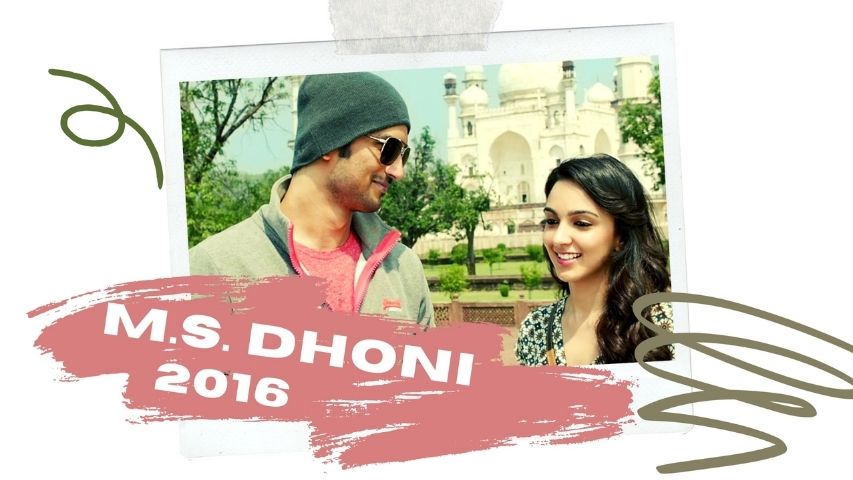 This one offered an insight into the making of ace cricketer Mahendra Singh Dhoni, his captainship and the phenomenon he became in the world of cricket. Sushant Singh Rajput knocked out his career-best performances, backed by Kiara Advani, Anupam Kher, Disha Patani, Bhumika Chawla and Mithun Chakraborty. Directed by Neeraj Panday, it scored a boundary at the box office. 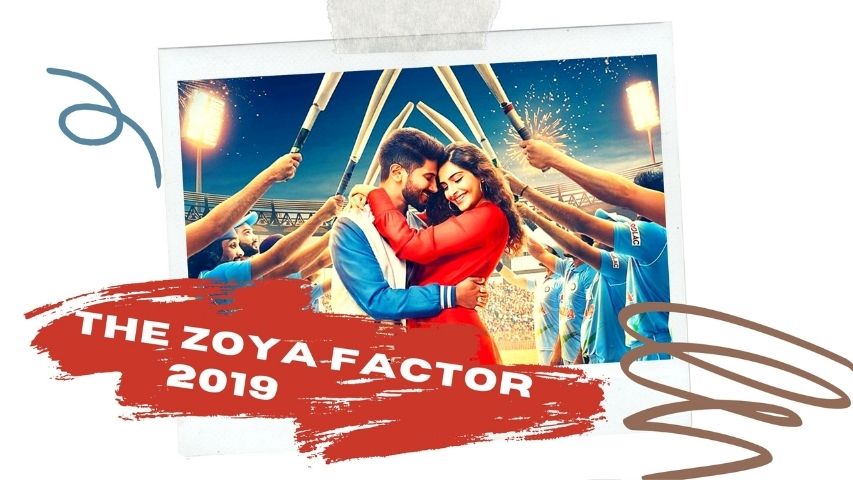 With a voice-over narration by Shah Rukh Khan, this rom-com directed by Abhishek Sharma and adapted from a best-seller book by Anuja Chauhan, told the story of Zoya who becomes a lucky mascot for the Indian cricket team during the 2011 Cricket World Cup match. Snag is that the team captain doesn’t believe in luck and superstitions, leading to romantic friction between the lead characters portrayed by Sonam Kapoor and Dulquer Salmaan. Technically glossy, however, the outcome was nixed critically as well as commercially. 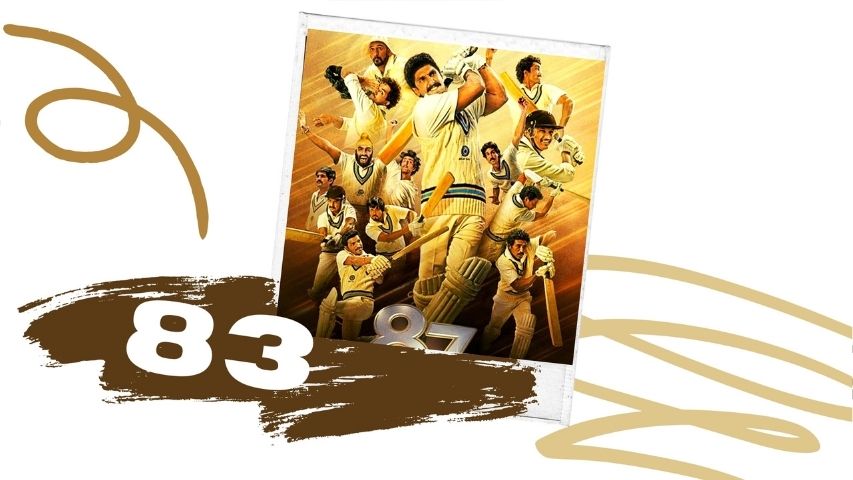 PS: Meanwhile, director Kabir Khan’s 83, an account of India’s historic World Cup Victory in 1983, is eagerly awaited. Headlining Ranveer Singh as captain Kapil Dev and Deepika Padukone as his wife Romi Dev, the acting crew includes Saqib Saleem, Tahir Raj Bhasin, Boman Irani and Amrita Puri. The shoot had begun around June in 2019 in England. Scheduled for a theatrical release on 10 April this year, the release has been postponed due to the COVID-19 pandemic.