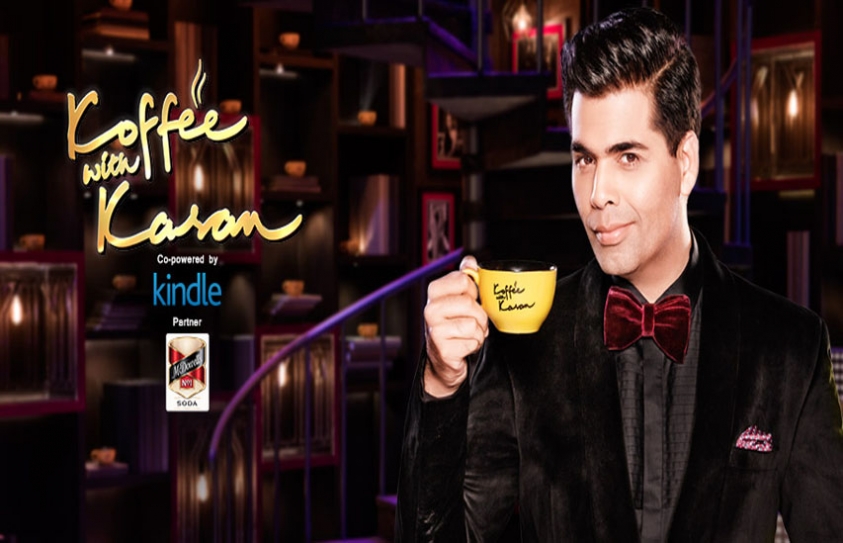 I haven’t been an avid fan of Koffee with Karan, but admittedly I do check out the episodes each week. If I like what I see I stay on, or else switch channels. Last Sunday’s episode with the Khan Brothers was one of the best KWK episodes, in fact almost matchless. A tell–all episode, where the three brothers were at ease and seemed to have fun with each other as the ribbed the host. KJo couldn’t have asked for a better way to mark 100 episodes.
Overshadowed by the flippancy and high pitched hilarity of some guests, Koffee with Karan yet has had a few seminal episodes with Bollywoood’s A-listers on the couch. Some of them like the Bachchan family together, and by themselves. Amitabh Bachchan in particular has graced the couch almost every season; as has Shah Rukh Khan. In fact, more often than not SRK opens each season; some have likened SRK to Ganpati, who we propitiate at the start of any new venture!
There have been coups like getting Neetu and Rishi Kapoor together and Neetu’s first TV appearance after a hiatus of 20 years. She’s been on telly before with Simi Garewal. Candidly, Neetu Singh recalled their courtship period and how she was a conduit between Rishi and his girlfriends, and also a shoulder to cry on. She had audience in splits as she revealed Rishi’s idiosyncrasies, especially his penchant for grandiose lexicon. It has made the cut among the Top 10 of Koffee with Karan, which premiered in 2004.
Shows like Koffee with Karan and its precursor Rendezvous with Simi Garewal have filled the fan magazine slot on television. Rendezvous with Simi which was first telecast in 1997, wasn’t India’s first talk/chat show; but it is the only one to have survived. To her credit Rendezvous with Simi sparkled with content because of the meticulous research that preceded the encounter with each guest. Recently, Simi’s interview with Jayalalitha is making the rounds on social media particularly What’s App. This one interview reveals the lady’s crush on Shammi Kapoor , her early beginnings as a reluctant child artiste which she did for the sake of the family and then the reluctant politician following the footsteps of her co-star of long standing MGR.
Simi Garewal’s Rendezvous guest list hasn’t been confined to just Bollywood, she has had corporate heads (Ratan Tata), cricketers like Brett Lee and international stars Jackie Chan. Sometimes she’s devoted two to three episodes to a particular guest, e.g.: Amitabh Bachchan, Dev Anand, Rekha, Jayalalitha and even Imran Khan.
In keeping with her trademark elegance, Simi Garewal’s sets have a spatial verandah look denoting comfort and grace. A hark back to an era where an easy paced life was the style. Whereas, Koffee with Karan is marked with a couch where the guests can even put their feet up.
Zee TV recently concluded with a 10 week Sunday evening series Yaaron Ki Baraat where they invited friends for a chat and a few rounds of teaser games. The first episode was Amitabh Bachchan and Shatrughan Sinha. It was hosted by Sajid Khan and Riteish Deshmukh. The criteria was friends, so in the 10 weeks we saw Yuvraj Singh and Harbhajan Singh, Parineeti Chopra was with Sania Mirza; while some actors teamed up with their director friends. Yaaron Ki Baraat was just about friendship and kidding.
Just as each week television viewers eagerly await the next episode of Koffee With Karan or whichever show is in season, likewise the show’s back up team are selecting, inviting and ensuring a steady stream of guests on the couch. It’s not easy to do a talk show, one must admit.