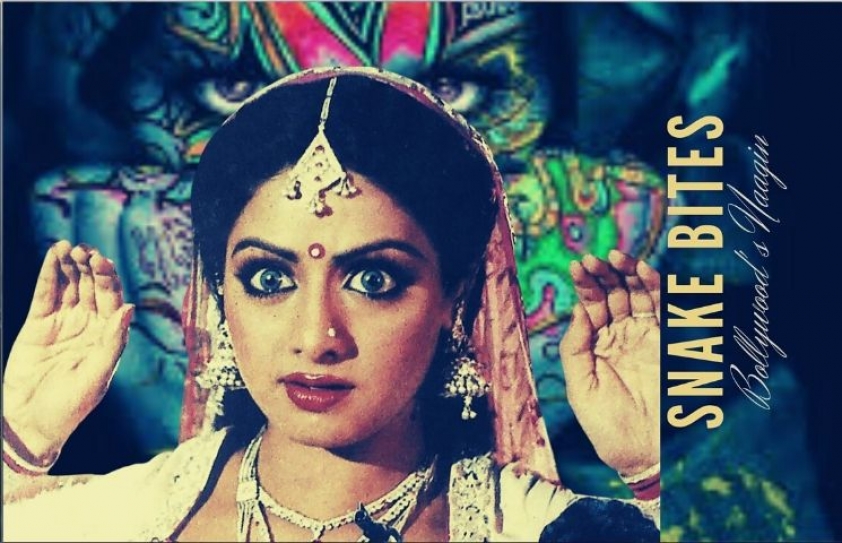 Film historian Dhruv Somani takes stock of the Naagin and Naag movies, which have crowded the Bollywood repertoire for decades now.

Snake stories have since time immemorial intrigued the superstitious among Bollywood audiences. Right off from the 1940s there have been projects, which were driven by snakes as central to these ludicrous and amusing stories. Obvious reason being that a large number of Indians worship snakes.

Those Saanp aur Sapera movies produced between the 1950s to the early ‘70s essentially used elements from mythology to strike a chord with religious viewers, and mostly made money at the box office, drawing in family crowds, which would gasp at the seemingly bizarre feats performed by snakes which, incidentally, were managed for the producers by special trainers. And it would be a given that these film’s plots would be set within rural backgrounds.

The black-and-white film titled Nagin, featuring Vyjayanthimala and Pradeep Kumar became a rage, especially for its alluring pungi (also called the been, which is a wind instrument played by snake charmers in the Indian subcontinent) music track - Man Dole Mera Tan Dole played by Kalyanji on the clavioline under Hemant Kumar’s stewardship. And (don’t laugh at this mother of all marketing gimmicks), it is said that the song actually attracted snakes to the theatres.

The modestly assembled snake sagas commanded a loyal fan following till the time big-budget snake flicks started getting produced because theatres in India slowly increased in numbers and started spreading across rural India, where there were big numbers of audiences waiting to lap them up.

Of course then, it wasn’t surprising at all, that the astute Ektaa Kapoor, queen of neo-camp Hindi television, made the genre a brand with her Naagin series, largely viewed by lowest socio-economic strata among Hindi speaking audiences of India.

Her Nagin series has gathered eyeballs and they continue to stream on television channels, which target viewers who believe that snakes are the several incarnations of the zillion Gods that the Hindu’s worship.

Now, here’s a pick of a clutch of snake films – for better or for worse -- which have crowded B-town’s movie lists across decades:

A multi-starrer directed by Rajkumar Kohli, it was a box office smash. The theme was based on the myth that when cobra crosses over 100 years of age, it attains powers to take a human form. In the event, the male and female of the species are ready and set to unite in the jungles. But wait, the Naag – male cobra - is shot dead by someone from a group of friends.

The angry Nagin – female cobra, manages to see them in the eye of her dead lover and sets out on a mission to avenge her consort’s killers. Reena Roy played the Nagin, a negative role, which was rejected by quite a few of the top heroines of the time. For Reena it proved to an auspicious career choice. Sunil Dutt, Feroz Khan, Sanjay Khan, Vinod Mehra, Anil Dhawan, Kabir Bedi and Jeetendra were the male leads.

The female ensemble comprised Rekha, Yogeeta Bali, Prema Narayan, Neelam Mehra and Mumtaz (it was her last film before she got married). Remade in several Indian languages, the basic premise of the story was adopted for several high rated television dramas and regional films. Finally Ektaa Kapoor produced the long-running television drama Naagin, which was based on the same premise.

Rajkumar Kohli took the same theme for Jaani Dushman – Ek Anokhi Kahani (2002), which was an amalgamation of two super hit films, Nagin and Jaani Dushman with a mammoth star cast but it failed to make a buzz.

Nagina was a fantasy film, which was a surprise hit. In fact, it was the biggest blockbuster of 1986 in which Sridevi immortalized the role of the snake woman who marries the hero, Rishi Kapoor, and saves him and his family from an avaricious sadhu Bharaonath played by Amrish Puri.  Incidentally, the project was first offered to Jaya Prada who declined it since she had a phobia of snakes. The director Harmesh Malhotra came up with a sequel Nigahen in 1989 again with Sridevi opposite Sunny Deol, but the sequel lacked bite at the ticket windows.

This was fashioned on a similar plot about a tantric sadhu hunting for a Naag and Nagin to steal the precious Naagmani so that he could attain immortality. The script incorporated a twist of reincarnation within itself: the Naag named Kuber is killed and after 21 years is reborn as Suraj and falls in love with the daughter of the man who had killed him in his previous birth. The daughter, needless to say, was the love of his former life. Complicated!  Featuring Rajiv Kapoor, Mandakini and Vijayta Pandit, it had its taut moments but was rejected commercially.

Director Mohan Prasad concocted this snake yarn with Nitish Bharadwaj and Meenakshi Seshadri. Lore has it that it was impossible to film certain intimate scenes, since Meeenakshi Seshadri refused to cross the line over to erotica. Nitish Bhardawaj who had essayed the part of Lord Krishna in B.R. Chopra’s epic series Mahabharat (1988) wasn’t accepted by audiences as he had once played the immensely popular character who danced on top of a snake’s hood and now, he was dancing around a woman like a snake. The film flopped. Nitish was reluctant to sign more films - once bitten twice shy? 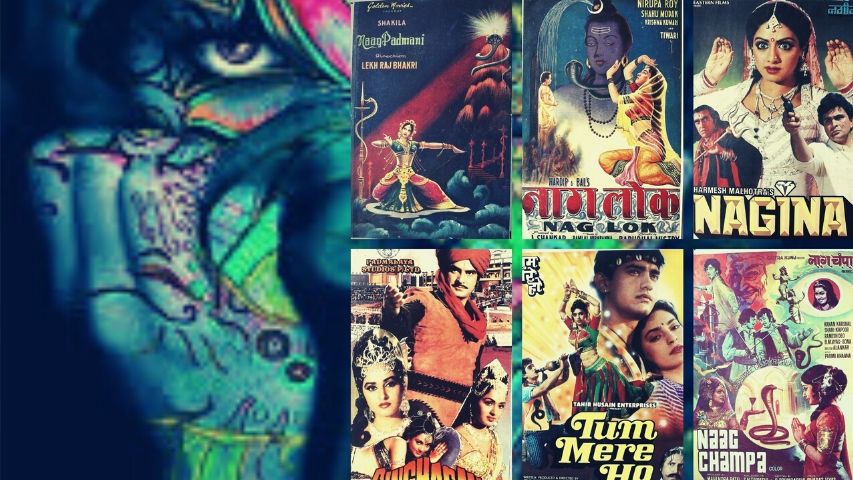 Vishkanyas were young woman used as killers against powerful enemies in ancient times as per Indian mythology. Jag Mundhra marking the debut of Pooja Bedi opposite Kunal Goswami directed the film. The narrative was a revenge drama about a girl named Nisha who is given slow snake poison by a tantric sadhu, which transformed her into a Vishkanya and then she succeeded in avenging the killers of her parents. Another film I recollect having a sub-plot of Vishkanya is Singhasan (1986) made by Hyderabad’s famous Padmalaya Studios starring Jeetendra and Jaya Prada. Mandakini who played the role of a Vishkanya Chandana is assigned to kill King Vikram Singh played by Jeetendra. I must say that, Mandakini seriously looked her part in the film with her piercing blue eyes.

Aghoori, a dreaded tantric sadhu is on a hunt for the Icchadhari Naag -Nagin pair for the priceless shining Naagmani to rule the universe. The acting crew directed by K.R. Reddy included Jeetendra, Rishi Kapoor, Rekha, Madhavi, Mandakini, Anupam Kher and Danny Denzongpa. The film might look a tad funny today but was one awaited film of the ‘90s due to the presence of Rekha wearing over-the-top costumes. Yesteryear scribes recall that she would keep the unit waiting for hours and hours to show up for rehearsals, and finally choreographed her own moves for the film’s finale. The result was mega-messy and went through the cracks.

Produced by Salim and directed by Ashok Gaekwad, this one dealt with the revenge of Saperan (Female Snake Charmer) Parvati, whose husband is wrongly accused of theft and beaten to death. She nurses her son Suraj, along with a snake as her ‘second son’ by breast-feeding them both. Eventually Suraj and the snake wreak vendetta. During the climax, the villain and his goons and bitten to death by flying snakes! This oddity starred Jackie Shroff opposite Neelam, along with Varsha Usgaonkar, Aruna Irani and Raza Murad. The film did well and was dubbed in Marathi as Upkar Dudhache. It is said that the film was first offered to Madhuri Dixit who declined on taking advice from actor Anil Kapoor.

Uh-huh! Aamir Khan in a snake film! His father Tahir Hussain directed Tum Mere Ho, co-starring Juhi Chawla. Using a rural milieu, the story dwelt on the loves of snake charmers and of superstitions and black magic, which continues to this day in villages. Aamir Khan portrayed Shiva who possesses the super power of catching deadly venomous snakes. He falls in love with Paro from a wealthy family and has to prove that he’s a worthy match for her. The music by Anand-Milind contributed considerably to the film’s success. 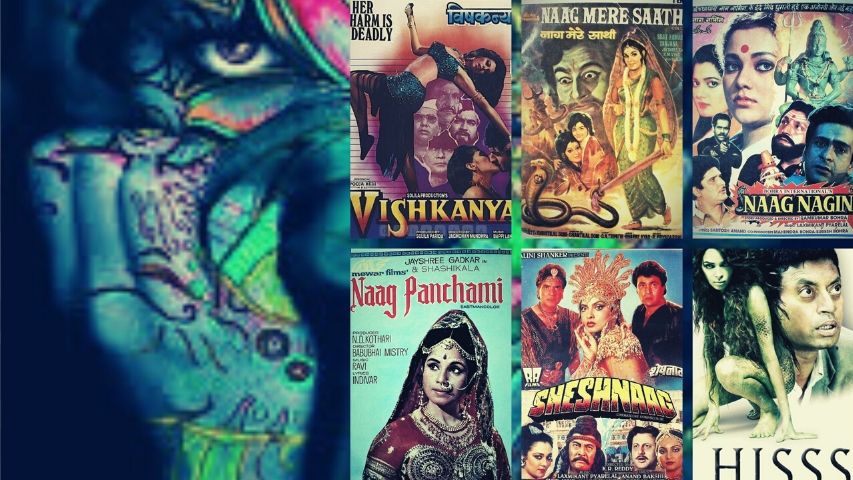 Here was a love story about a couple with different social backgrounds. They elope and decide to get married against all odds. Their plans go for a toss when they reach a cave of an evil tantric sadhu who converts one of them into a snake at sunrise while the other turns into a snake at sunset. So only one of them can be in a human form at different times of the day and night. The music again by Anand-Milind topped the charts.  Starring Avinash Wadhawan opposite the demure Shaheen (niece of Saira Banu) for T Series, the was a moderate success.

The announcement of Mallika Sherawat as a Nagin set off a buzz of excitement for snake movie fans like me. An adventure film directed by Jennifer Lynch began with the task of obtaining the scared Naagmani to attain immortality – as an American man is suffering from the final stages of brain cancer. His goons capture the Naag while the Nagin comes to the city to look for him and is helped by a childless couple, incidentally played by late Irrfan Khan opposite Divya Dutta. The special effects were way above average but couldn’t rescue the outcome from oblivion.

This article would remain incomplete without the mention of two films. If you think that becoming snakes in films was only restricted to mainstream heroines, here are two films starring popular actors, who shed their skin to portray the reptiles.

Directed by B.R. Ishaara, the plot was a showcase for Shatrughan Sinha in a double role. For one of the roles, he played a century-old venomous, chameleon-like snake opposite Reena Roy who played a snake charmer. The film was successful and the pair went on to do several films together. The song Kai Sadiyon Se Kai Janmo Se, composed by Brij Bhushan Sahni and sung by Mukesh became popular too.

Around the time when revenge and violence were rocking the Bollywood box office, this modestly budgeted caper directed by Rajashekhar starring Rakesh Roshan, Rati Agnihotri, Bindiya Goswami and Mithun Chakraborty turned out to be a curious piece. Mithun Chakraborty was Nagraj, who developed symptoms of a snake every full moon night and he goes on a poisonous killing spree of young women from a village. Somewhat different from the products of the ‘80s, it was a Hindi remake of the director’s successful Telugu venture, Punnami Naagu.