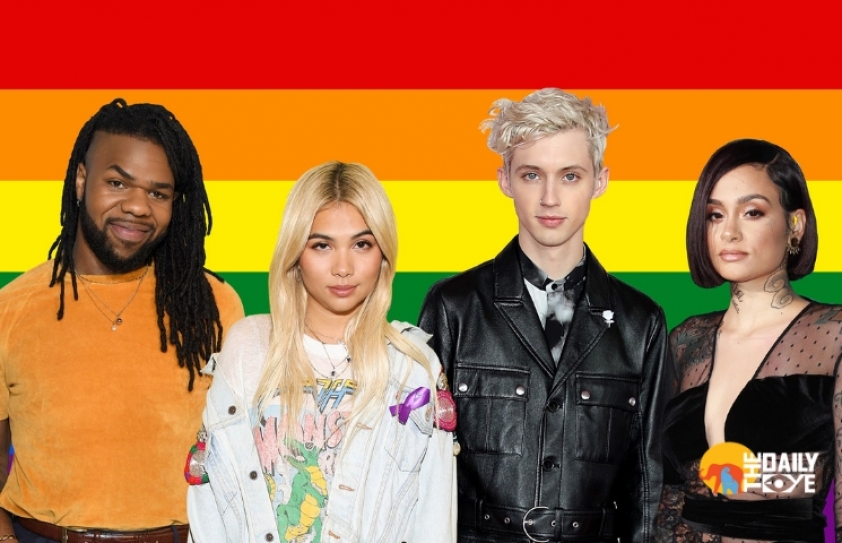 Last week, Ariana Grande set the internet on fire with a lyric that suggested she was bisexual. Ariana Grande stated she “did not really feel the wish to label” her sexuality. “I love men and women,” the 25-year-old sang casually on Monopoly, a duet together with her pal Victoria Monet. This surely sparked a convoy of questions concerning the celebrity’s personal lifestyles. “Is she bi or nah?” requested one fan on Instagram, to which Monet responded: “She stated what she stated.”

On Twitter, another fan commented, “Ariana ain’t gotta label herself,” prompting the pop star to respond: “I haven’t before and still don’t feel the need to now”. The BBC has reported that a new generation of gender and sexually-fluid pop stars are challenging stereotypes and celebrating their identity through music.

Similarly, in 2012, when Frank Ocean posted an open letter to Tumblr, he described how he’d fallen for a man when he was 19. “It was my first love, it changed my life,” he wrote. “There was no escaping, no negotiating with the feeling. No choice.” Ocean chose to address his bisexuality at the start of his career.

“I think the landscape has changed dramatically for queer artists,” Olly Alexander from Years & Years told the BBC last year. “In the past, we’ve all been familiar with pop stars coming out in the middle of their careers, or after they’ve become huge and that feels like a heavy narrative to queer people. Now it seems to be really changing that artists can be out from the start of their career; and it's not some sort of sensationalised headline.”

In the last few years, artists like Anne-Marie, Troye Sivan, Harry Styles, Christine and the Queens and Demi Lovato have all talked about same-sex attraction or bisexuality in their lyrics.

Joe Nellist from the LGBT Foundation says musicians are simply reflecting their generation’s attitude to sexual identity. “There are a growing number of young people aged between 16 and 25 that identify as lesbian, gay or bisexual. The figure currently stands at 4.2%, which is more than twice as high as the general population. It indicates we're moving towards a society that’s more tolerant and accepting, where people feel confident and comfortable and able to come out at a younger age” she said.

Musicians have additionally been given the licence to specify their sexuality via structural shifts within the tune trade, says Rachel Brodsky, managing editor at Grammy.com. “In previous days, widespread artists had been slightly extra fenced in, with executives surely prioritising what’ll transfer data and generate profits,” she explains.

"Like, if you talk about a taboo subject on a record, you risk some giant music emporium like Best Buy or Walmart not stocking that record. But the way music is consumed is totally different now, with streaming and the power of social media marketing. Nowadays, labels come after artists because of their authenticity, which usually translates to social media followers. So we see artists having a more significant upper hand when it comes to their image and what they say in their lyrics."

The truth is that individuals are increasingly refusing to outline themselves with the existing binary sexual alternatives.

"So tell me why my gods look like you," sings King Princess in her debut single.

Pop singer King Princess agrees it’s crucial to have positive role models. “When I was a kid, I wanted somebody to look up to, whose music I was excited about, who was gay,” she said. Instead, she ended up following gender-neutral, but predominantly straight, artists like Marc Bolan, David Bowie and Led Zeppelin.

“There was this ambiguity from the people who were on stage, like, ‘You don't have to be a boy, you don’t have to be a girl, you can wear tight-ass pants’. I was just like, ‘This seems like my lane. I like this type of showmanship. This is making me feel comfortable about my sexuality. These guys are totally gay.’”

Now making music on her own terms, the singer is relaxed at being labelled a “queer icon in the making”.

“I hope my music’s really thoughtful and strong and people just get with it. At the end of the day, that’s really what this is about” she says.

“Queer isn’t a genre, it’s a sexual preference,” she says. “And if we use the word ‘queer’ to describe someone’s sound, we risk marginalising artists who, ideally, deserve to be integrated into the greater pop pool. It’s like using the term ‘all-female band’. What does it matter what someone’s gender or sexual preference is when it comes to music? At the end of the day, everyone’s an artist. Let’s stick to describing sound as a form of classification instead of appearance and sexuality, shall we?”