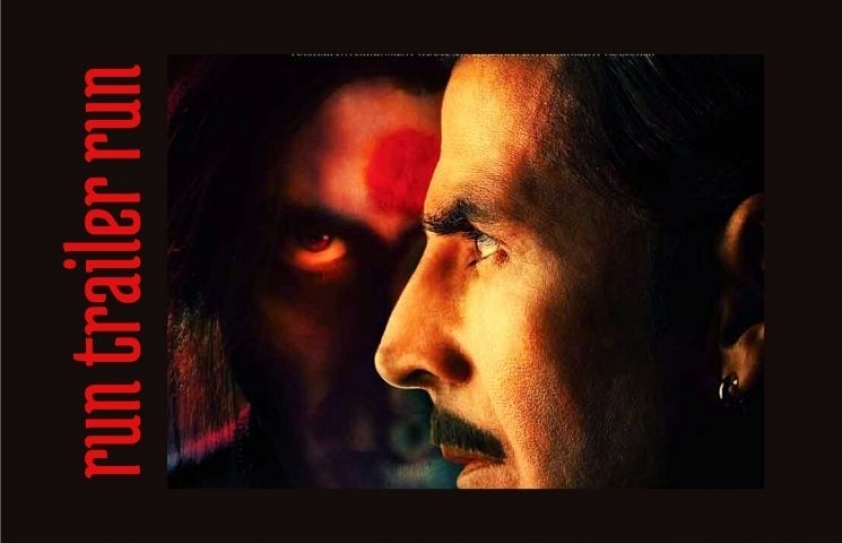 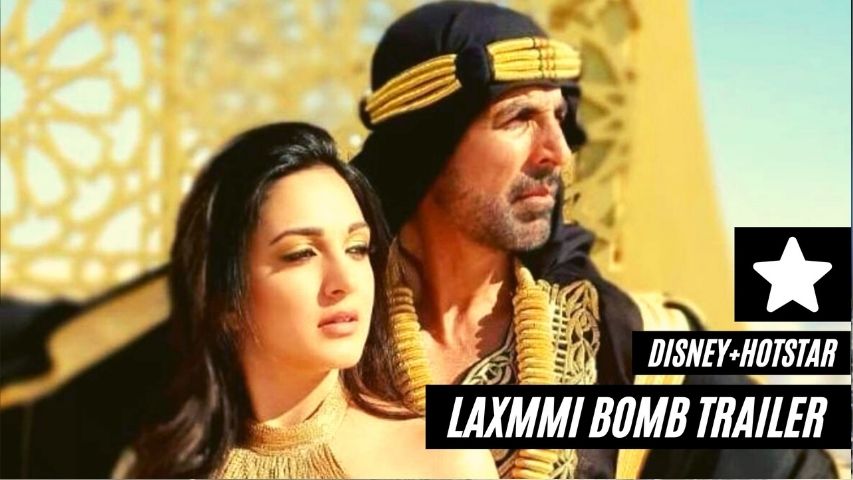 Once upon a good time, I’d make it a point to do a Run Lola Run kind of sprint to make it to a movie show on time or at least five minutes earlier. Never could miss the trailer(s), which preceded the main film. Tradition continued at the multiplexes, although with a difference.

These quickie trailers were shown during the intermission, allowing you to buy as many of those gigantic popcorn tubs, never mind if they burnt an irreparable hole in your pocket. Yeah, now trailers are all over YouTube and the streaming channels.

So there I was, attempting to see the shape of Akshay Kumar in a fire engine red sari and a vermillion tikka on the forehead. Laxmmi Bomb, evidently, showcases him as a transgender in some scenes. How many exactly? We’ll have to wait ‘dil thaam ke’, as the saying goes, to discover the number.

Our Bomb Lady, you might know, has been a bone of contention. The multiplex-wallahs longed to premiere it for its commercial potential around last May 22. The pandemic ruled that out. With some trade introspection by its producers, another kind of bomb has been dropped: it will drop on Disney+Hotsar as its Diwali attraction. Firecrackers and phoojadis, hopefully, will be subdued this year, social distancing, masks and other safety measures adopted in real-life. In the safety of your home, Akshay Kumar and his team will seek to light up your life instead. Noble intention.

Alas and alacklustre, the trailer of this retread of the Tamil hit-hot-hit Muni 2: Kanchana, directed by Raghava Lawrence - who has been retained as the helmer, never mind if he threatened to walk out at the outset supposedly because of ‘creative differences’ – proved to be a collossal head-banger. Midway through, Akshayji drapes a saree dramatically around his mega-muscular bod to ask, “How do I look?” At least I was dumbstruck, couldn’t summon up a squeak of an answer. Drag acts have been a rupee a dozen in the Bollywood movies, the pinnacle was in fact achieved so many suns and moons ago by Amitabh Bachchan for the song-‘n’-danceroo number Mere Angne Mein Tumhara Kya Kaam Hai (Laawaris, 1981).

Right, before this becomes a micro-history of drag acts, let me cut back to the trailer. It pointed towards a hero who’s petrified of ghosts, and one fine weekday some malevolent spirits enter his soul, leading to the purported howlarious gender-bender twist in  the plot pourri.

Fine we’ll wait to see how that pans out. But hello hello, there’s an entire song sequence – the eponymous Bomb accompanied by Kiara Advani - dedicated to Dubai’s Burj Khalifa, the tallest tower in the world.

Ulp, is that a product placement (better known as endorsement)? If it is, then it’s surely the first of its kind. Imagine, the floodgates may now be open for The Taj group, The Oberoi chain, The Marriotts and more to commission such grand adverts.

To be squeaky fair clean, who knows this supernatural comedy (ha ha already) could turn out to be hugely popular with the viewers. There’s been a chronic shortage of loony tunes from B-town lately. The critics may pan it but then so were the Housefull and Kya Kool Hain Hum franchises. Manic masala sells, no?

Oh, almost forgot to inform you that in order to promote this multiple ghost-flick, in a friendly gesture Varun Dhawan fetches up to do a Zoom-like interview with Akshayji. Garbed in a penguin-like white-shirt with a black bundi, Varun bro, smiles cheerily and poses questions, which are answered as cheerily. Plus, bro interviews Ajay Devgan and Abhishek Bachchan too, about their upcoming Bhuj and The Big Bull, respectively. The tete-a-tete with Bachchan Jr is remarkable for the number of times he repeats the word, “wonderful”, “wonderful”, “wonderful”.

Ergo, here’s my early bird resolution for the upcoming months. Never watch a trailer on the streaming channels. They might influence you in strange ways. Like I’ve taken to wearing black-and-white, penguin-like outfit for my Zoom barabar Zoom chats.

And just by the way: this is the first and last trailer I will ever watch. Much too nerve-wracking, its like being stranded in a crowd, which doesn’t believe in wearing masks in public places. 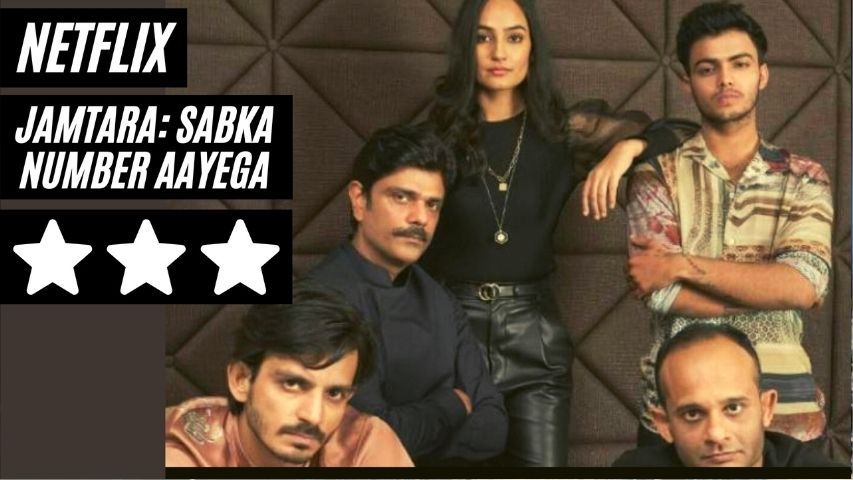 It happened to me, and it must have happened to you too – those fraudulent sms’s and WhatsApp messages calculated to raid the ATM machines. On quizzing officials about this menace, I was told by all of them, “Arre, this is nothing but Jamtara. Haven’t you seen it?” I hadn’t, clearly it has become iconic. My bad.

Therefore I streamed Jamtara, and it’s a pretty detailed account, based on real-life incidents in 2015-‘16, of the ‘phishing’ conducted by small-town juvenile delinquents.

Reportedly it was especially prevalent in the Jharkand township of Jamtara. Opting for a technical style that’s rough and ready, director Soumendra Padhi grabs you by the collar to take you amidst the delinquents who carry out cellphone crimes from the stretching farmlands. The focus is on the super-sharp but callow 17-year-old Sunny and Gudiya, his slightly older bride, who hope to escape from their stifling conditions for a better life in Delhi. Enter, a venal politician, who bullies the ‘phishing’ squad to anoint him as their godpapa in return for a hefty share in the lakhs cheated from the guileless, be it a naïve schoolteacher or corporate executives.

The wrap-up of the 10-episoder does become too formulaic – an elaborate rape scene attempt – but for most of its way, the dramaturgy is both immersive and edifying.

Of the cast, Sparsh Shrivastava as Sunny, Monika Pawar as Gudiya, Amit Sial as the oily politician and Asha Pardasany as the iron-willed police officer determined to bust the racket, are uniformly first-rate. 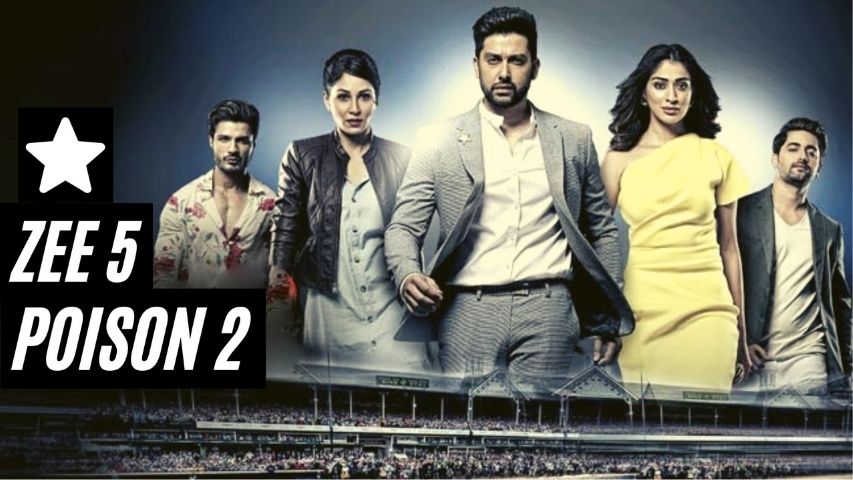 This one’s significant for its exhibition of a variety of hair styles, steam-ironed, gelled, tinted, the whole salon works. Cut to a rather expressionless married couple then, whose stylist has created domes of hair, which wouldn’t budge even in squally weather. Over to a brother-in-law whose puff of a crown is reddish above kaajal-laced eyes (he’s gay, wears flowery shirts… such stereotyping I tell you).

And above all there’s a tycoon – who must be mentioned in the Guinness Book for being the heftiest Derby race jockey ever – whose hair too is a barber’s dream-come-true. In short, they’re all perfectly groomed but because of the addled storyline, our mood is doomed.

Confession: Being a glutton for punishment, I’d attempted to try this Poison 2 (the recap of its prequel was tougher than trigonometry though). Turns out that the Tycoon and the Expressionless Couple are warring over the ownership of a race course in Goa (if I got that right), so future racing events can be fixed faster than a light bulb fuse.

Vignettes of sexual encounters in double-entendre beds, dialogue on the lines, “If you take your mask off, you’ll show a face that’s even faker” (duh?), everyone saying “AnywayS” all over the studio scenery, and heaps of financial jiggery pokery go yawn and yawn on till the first episode crawls to an end. Sweet relief.

Auspiciously you’re spared of trying the next one, because the subscription fee isn’t enough. Only the first one is for free. Gee,  really the cocktale served by director Vinay Pandya (once associated with the school of Vikram Bhatt) isn’t my goblet of poison anyway. Or anywayS.