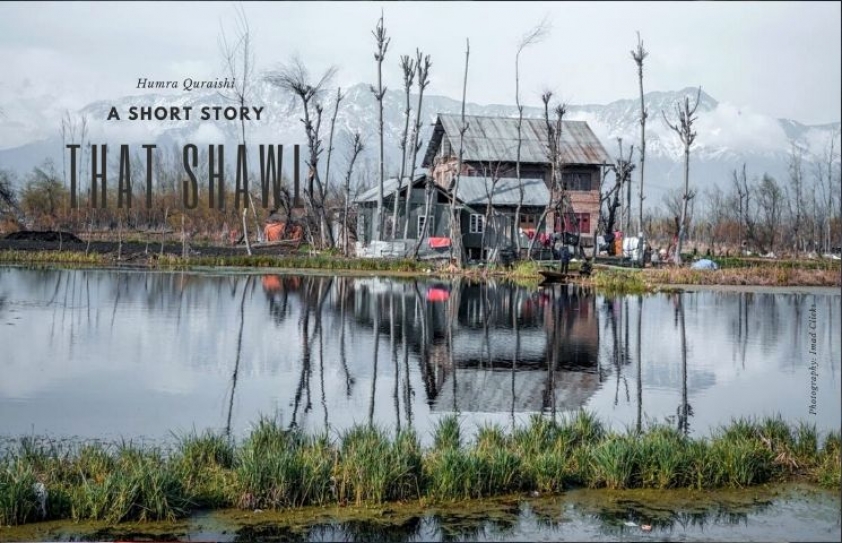 A short story by – Humra Quraishi,

As I was assembling the suitcases, Shams Shah breezed in. Dumped a crate, right at my feet. ‘Your khaansama told me you off to Srinagar… just bought these mangoes for my children at Por. Take them along.’ Before I could react, he was heading out, leaving this crate along with a chit carrying an untidily scribbled address. With that, leaving me with little choice but to carry the mangoes. Perhaps, his children would be waiting for these dassehris, chausaas, langras, fajris…

Carrying that crate along with my baggage, I drove towards the airport. Hassled and hyper, I’d somehow boarded… With the aircraft soaring, I sat wondering: Why were so many traveling towards the Valley, when curfews and clampdowns and uncertainty held sway?

Among the passengers several uniformed men stood along with the ‘outsiders’ and ‘insiders’. And a rather strange looking man was sitting next to my seat. Staring in that restless way. Eating in an obnoxious way, swallowing and gulping as though he hadn’t touched a morsel for days at  a  stretch. Slight disruption with that man’s hand bag slipping from his grasp. Paint brushes, twisted tubes, strips of handcrafted paper falling, lying in a heap. He tried retrieving some of that paint, by stroking a long paint brush on it, before applying it on the strips. Within seconds images taking shape -lilies, daises, daffodils, desi roses. More of them, with the retrieved paint finding its way on to the strips. 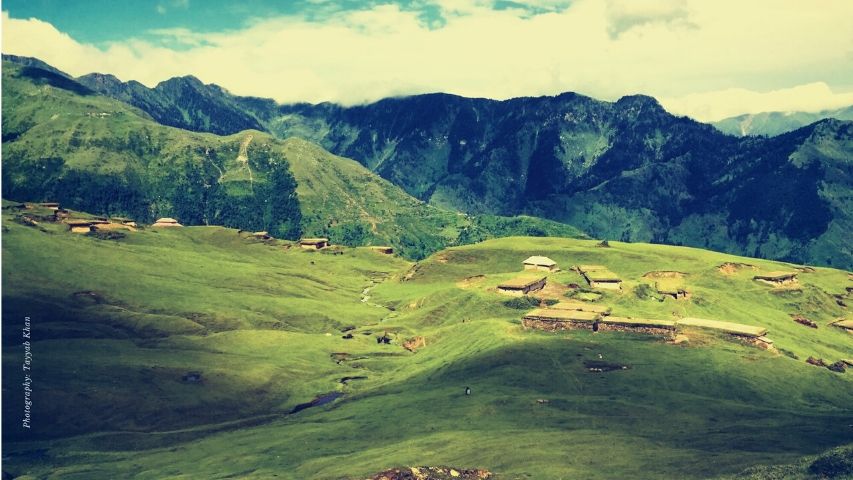 ‘You based in Delhi or in Srinagar?’ I tried starting off a conversation of sorts.

Opening and shutting his mouth in some strange way, without uttering a single word. Looking  somewhat  rattled, stroking  another  bushy  brush  on  that  paint before  applying  it  on another  of  those strips.

‘You an artist? Your studio in Srinagar?’

With more images taking shape, passengers started gathering around him, ‘You selling this one with lilies? That one with daffodils and roses?’ Several not curbing their purchasing power, ‘Two thousand for that one. And one thousand for the one with tulips. Also buying that other painting too. Okay? Count and …’

Seeing and sensing more passengers coming up with similar offers, he looked about in that angry disgusted way, before reacting all too suddenly. Throwing  about  not  just  his hands but even the paint tubes and brushes. If that wasn’t enough, tearing the painted strips. Together with that, throwing himself on the seat. Fastening and unfastening the seat-belt. Looking about impatiently, here and there.

Continued doing so, even when we landed. His expressions unchanging. He looked disgusted and angry towards the expressionless men manning security slots at Srinagar’s renovated airport.

Expressions emerging on the inspector’s face. Craning his neck towards   the mango crate, ‘These Chausaas! Can’t get these mangoes here. Nah! Raided shops but nowhere these chausaas!’ Lifting the crate, ‘Personally putting it for checking… Wah, wah, these mangoes! Too tempting!’

Almost simultaneously directing me towards the frisking room. An invasion, intrusion of the unwarranted sorts, complete with all sorts of touches, good and bad, all the way - here and there, inside and outside, left and whatever’s left of the right!

Over with that touch - all - over - session, I walked out, focusing on the chit carrying the home address of  Shams Shah,  before  throwing it  towards the taxi  driver. 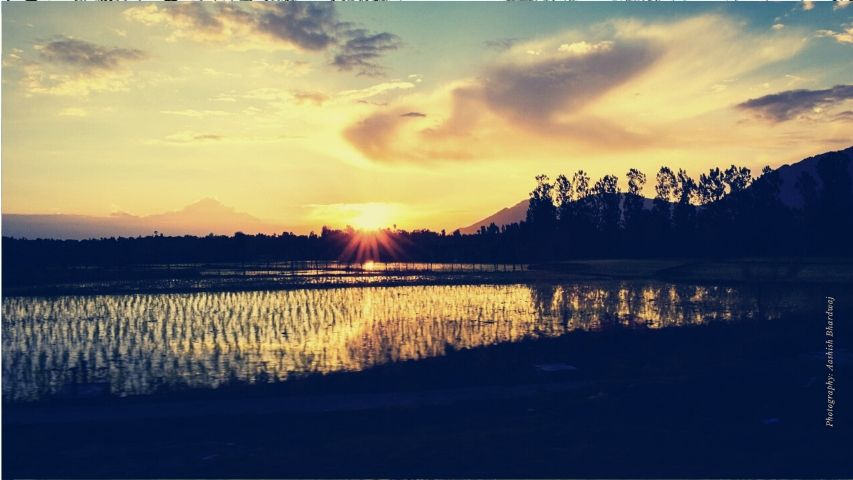 ‘This address … to reach this place.’

‘This village miles away, beyond Charar.’

‘Charging eight hundred. Road broken till that bypass, very tough driving   but no other way.’

‘Will reach before sunset?’

‘Much before, unless these roads…’

Adjusting his twisted spectacles together with  adjusting that chit, before throwing along  another heap of   disjointed  sentences, as  though he  was   on the  verge of a breakdown  or  else  making  sure my   nerves  get  close to getting  unnerved, ‘These roads! Only for mules! MLA janaab has no time for bijli, paani, or for our jaans!’ Pausing, not for long, ‘See there, that entire convoy in that orchard. Ripping off! See, just see.’ Halting all too abruptly, with this additional flow of words, ‘See there... another convoy! No, no overtaking. Too dangerous. Can be killed. Me and you. These eyes seen too much. Dangerous here, in this jahannum. Live here and you’ll know! So many killed. Hundreds buried at night in unmarked graves. But this hukumat throws about lies… only lies!’

Taking off again, along a longish stretch. Passing through a barren patch,   along a stream. Handing me a handful of wild grass and several pebbles and stones. ‘These absolute beauties. Can’t get them anywhere in the world. See their colour and shape. See this blue one with the greenish tinge and… take them.’

Wondering  whether to place them on the  teak table or  along the shelves of my home, till my hands no longer holding them. Those pebbles and stones and the grass blades falling. For, not too far, on the  other side  of the stream, that same man was sitting hunched, looking restless, as he’d been on the flight… yes, the same  man who was seated next to  me on the flight.

Staring towards him, murmuring more to myself than to the driver, ‘He… that man there. The same one who…’

‘On the same flight. He sitting next to me… an artist?’

‘Lunatic! Paints and paints. No selling, no moving.’

‘But he on that flight!’

“Chief minister taking him to your Dilli to paint at some farmhouse. Our akhbaars carrying this big news. Read this in Srinagar Sighs!’

‘Only for chief minister?’

‘Sarkari janaabs force anyone to do anything. Their hukumat, total, total control. We in their control! Who isn’t scared of police-wallahs!’

The driver indulging in a full- fledged commentary, focusing on this man’s eccentricities whilst driving towards the connecting wooden bridge. Turning and twisting his stout neck, together with accompanying expressions on his face, ‘Some say he’d painted in his own studio at the Boulevard till the police-wallahs grabbed it. He turned mad, deranged… he went attacking top people. Charges thrown at him. Don’t ask fake or what! Those charges all too suddenly dropped after he painted for some ministers. But then his son gone… went missing. Gone!’

‘Missing! Thrown in the sarkari registers.’

‘What else! Tragedy making him insane. He paints and paints but  goes  tearing!’

‘His son also a painter?’

‘Don’t know whether a painter or plumber! But crippled he was. Khuda  jane kyaa beemari,  he couldn’t  walk  properly. Seen him limping, yet disappearing!’

‘All this happened about two years back so couldn’t be more than a teenager. You know this man looks more than his years. Too many people fooling him, extracting, stealing his works with those promises of tracing his son.’

Driving over the wooden bridge, halting close to the stretch where the man sat hunched, with the driver more than whispering to him, ‘This madam going ahead with aams to be given to …’

Getting up all too suddenly, looking at me as he’d done on the flight, ‘She’s the same woman…that same  one!’

‘Yes, she with you on the hawai jahaaz. Now she is my taxi… taking her and the mangoes to…’

‘Tell her all those mangoes gone! Not there in that crate or whatever you  call that  big box.’

‘Take it out… throw it open. That box is empty!’

‘What! What you talking?’

Pulling that crate, pulling and pushing the flaps, dismantling it, ‘See …see. This big box carrying nothing!’ Throwing his hands more than accusingly towards me, ‘All those aams with the police wallahs… with all those security wallahs! They grabbed all those mangoes from you! You let them steal each one of them! So much for inspection! Why didn’t you throw this shawl on them!  This shawl on you is not yours. Not yours! My son’s shawl on you. It’s the same shawl!’

That shawl slipping from my shoulder, landing in a heap on the grass.

My hands trembling. No, not moving towards it.

The monotony breaking with the driver’s angry outburst. Threatening to  call the cops. But the hunched  painter halted all such moves; throwing the  broken crate at one end of that expanse, together with these words, ‘No security creatures here! You want this woman to be devoured by those men! Mangoes down their throats and now this woman to be stuffed in their rooms to be ruined … No, no!’

‘But …but your son’s shawl with her! Your son could be …’

“My  son’s shawl it is …maybe my son is with her!’ Looking at me, towards that shawl, ‘This same shawl Ashraf had on him. Its carrying his smell, carrying the smell of his sweat. My son’s  smell… the same smell’

More than screaming, ‘His shawl. It’s the same weave, embroidery, threads… that same colour. You swallowed my Ashraf! Who comes back and in what shape! Gone is gone! Gone he!’

Somehow managing to board the next flight to New Delhi. Heading home,  rushing towards the  garage, looking at those  young boys  sitting  in a row. Including a polio-stricken boy. Looking forlorn. Sitting hunched. Not changing posture, even as I stand staring at his sunken face .

His hunch worsening, with the other boys nudging, whispering, ‘Ashraf! Ashraf!’

His eyes relaying that same expression of disgust mingled with hopelessness, as I’d seen in his father’s eyes. Or, even  in the  eyes  of  Shams Shah, the  man who had  sold him to  me, exactly  two summers  back. Staring at the other boys sitting in this garage. Wondering rather  aloud - should I send them back to those meadows from where they’d been  kidnapped, or let them continue weaving complicated patterns, for    women and  men who  rule, rather  misrule —the rulers of the day.