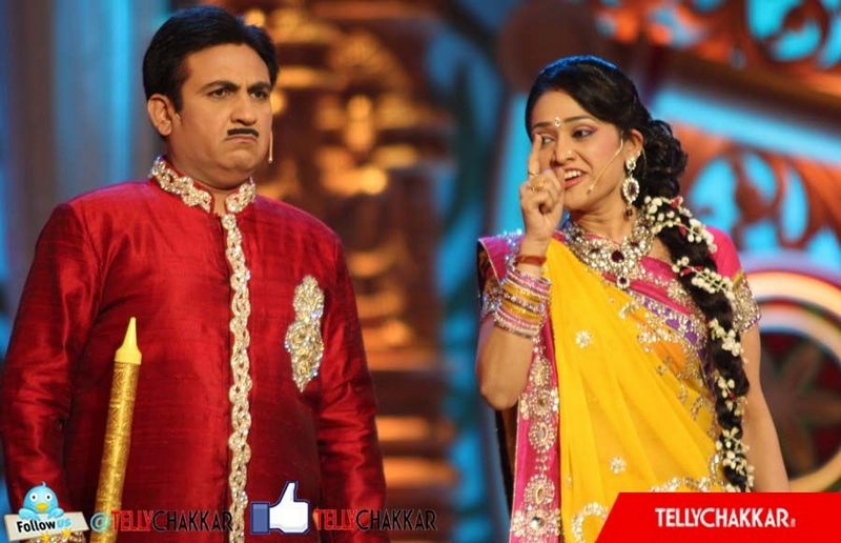 The weekend belonged to Holi, unequivocally. I simply couldn’t help but remember the time the only channel, our very own Doordarshan filled its play list of Chayageet, Chitrageet, etc. with song and dance sequences of Holi. Unfailingly, Piya sang kheloon Holi phagun aayo re, from the Waheeda Rehman-Dharmendra starrer from Phagun,    Holi Aayi Re Kanhai from Mother India sung by Shamshad Begum and picturised on Rajkumar and Nargis, the ever so popular Rang Barse from Silsila, and Kati Patang’s Aaja Naa Chodenge with Rajesh Khanna and Asha Parekh were the festival standards.

One could see the prelude to the festival building up in shows like Tarak Mehta ka Ooltah Chashma.  Patrakar Popatlal exposes adulterated colures and their reactions on users which also includes blindness, etc. With final exams round the corner, he convinces the residents of Gokuldham to desist from playing Holi. Bhide, the over conscientious society secretary, is in concurrence with Popatlal as there is a water shortage in the locality and the cleaners have refused to clean up after they play Holi. The fear of Tapu Sena falling ill weeks prior to their exams gets the motion passed at the Society meeting. But in the end, they do play Holi. The message about spurious colors was loud and clear.

Colour smeared faces; intoxicated revelry and lust are a heady mix for incognito sexual molestation. More often than not the victim is clueless about her violator. But as close circuit cameras are common in housing societies, the camera is a silent witness. The weekend’s episode of   Heroes: The Fightback Files depicted a young girl being molested on Holi in a toilet. An unsympathetic father and a helpless mother, spurred the victim to go back to the scene of the crime and identifies her molester on the CCTV video footage, but the building society’s chairman deletes the footage as the provocateur   is his own nephew. The latter’s parents shun her and the watchman, the only other witness to the footage. With help from her friends, including the offender’s cousin, she brings the boy and his parents down to their knees.

CID used the festival as a fitting backdrop for a denouement fatale in an episode where Abhijeet and Sarika are targets for a killing. On a lighter note, Sony’s telecast of Boogie Woogie on Sunday was rampant with colour and performances which were more colourful than the Holi ke raang and more intoxicating than bhang.

As the week begins, many a show still has its Holi sequences pending. Most often, the festivities are used to mend fractured relationships, or move the story forward.  Social messages too are sent out.  Holi has been used to give a twist to the story, as it did for Colors’ Uttaran many years ago, where Iccha kills Avinash who has attacked Veer. The show took not just a leap but a twist followed.

In reality, the colours of Holi are now faint traces, but at prime time the week is still young vis-à-vis Holi. In Jee Le Zara, Dhruv wants to be the first one to splash colour on Saanchi. Ankita, who is in love with Dhruv, plays spoil sport. While in Ek Nayi Pehchaan, the Holi celebrations put Sakshi in the dog house. Unknown to her drink is spiked with   bhang, she gets   riotous and applies colour on Dadi, and the latter considers it a taboo. There’s more trouble coming. A recent episode of Gustakh Dil on Life OK showed Holi festivities in Sonbarsa. Nikhil is trying to woo Laajo; soon we discover that it is a dream. Nikhil’s in Delhi, but can’t stop thinking of Laajo.

In true Doordarshan style most news channels did reports on the festivities round the country with a few live shots. But CNN-IBN’s take with Holi Unplugged is certainly commendable. It took the viewer straight into the heart of Vrindavan, the playground of Lord Krishna. The festive fervour is steeped in history and age old customs. The channel’s reporters jostled the crowds, took in the sights, the quaffed lassi and thandai, help mix bhang into the thandai and even tried their hand in making pedas. The 30 minute episode was an all too brief interlude of Holi in the interiors. Truly, CNN-IBN’s Holi reportage was the stand out among all channels – GEC and News.