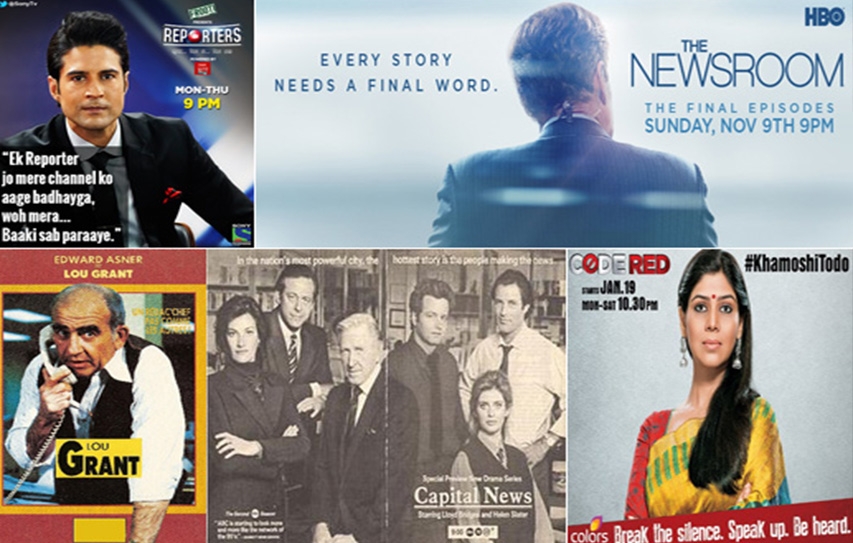 BEHIND, THE NEWS BREAKS

When going beyond kitchen melodrama and family politics, television content providers need to research the setting for their shows with a fine tooth comb. When Lifeline was telecast on Doordarshan, one couldn’t ignore the meticulous reality. Closer to present day, Hamari Sister Didi on Sony Pal displayed a similar authentic feel. In both cases, the makers had a doctor or a medical professional as a consultant, who made sure that the blood wasn’t tomato sauce!

Currently, Indian channels have one full fledged serial on the electronic media Sony’s Reporters. Much of Thapki Pyar Ki on Colors unfolds in the studios of a TV news channel. Though that’s not its USP, it steals a few brownie points for its realism and a well done sting operation on a prominent halwai shop to expose adulteration.

In the early Doordarshan years, Vinod Pande’s Reporter had a then newbie Shekhar Suman plays an intrepid journalist. It scored a hit for the young actor.

Since the late 1970s, American television has gone into newspaper offices and now a TV news channel — The Newsroom. They may not have rattled the ratings charts, but you can’t deny the authenticity. But when it comes to representing the media scene in India, this is missing.

Sony TV’s Reporters, is supposedly inspired by the US series The Newsroom. Although the show’s producer Shristi Arya would have us believe otherwise; she averred that, the seed of inspiration was sown when she met a reporter from a TV channel.

The early episodes misrepresented the media, on several counts — one of which was the channel office looked like it was a venue for a ladies’ lunch. No TV reporter sports high fashion, except when reporting on society events. That goes for the full suits or blazer jackets of the male anchors. I just loved Boman Irani’s appearance in PK, where he has a jacket and tie over a track pant!

What’s really missing is the energy and hectic pace of the newsroom and urgency of chasing a story. The stormy debates and discussions, the breaking news, and TRP grabbing drama is missing.

The makers of the show have clearly not placed research as a top priority. Reporters is more a love story between Kabir Sharma and Ananya an intern (and their back stories), set against the backdrop of a media house. Casting Rajeev Khandelwal and Kritika Kamra seemed paramount over creating the authentic feel.

It’s not that there are no stories to chase or events to place the series’ action in. Our news channels are a great source with readymade characters and events. However, one can’t overlook a few touches like exposing the journalist-politician nexus or stealing a march over a colleague for a story; or Kabir’s switch over from print to TV for recognition.

An award winning series, The Newsroom goes behind-the-scenes at the fictional Atlantis Cable News (ACN) channel. The ensemble cast led by Jeff Daniels as anchor Will McAvoy, who with his staff, sets out to put on a news show. Other cast members include:   Dev Patel, Sam Waterston and Jane Fonda as Leona Lansing, the CEO of the fictional network’s parent company.

Newsroom is as authentic a view of American news channels. From the anchors to their reporting and news desk teams; besides the staff jousting with each other and their romantic crossings, the world of ACN is as real as it can get.

The Newsroom was set in the recent past and tracked real world events as they unfolded, to give a better sense of realism. The US series too has had its hiccups, but you can’t deny it the authenticity.

Lou takes the job of city editor of the fictional Los Angeles Tribune, after being fired from a television station. Each episode dealt with personal problems between the reporters, as well as the frustrations and challenges they experienced to get their stories.

The series frequently delved into issues, such as nuclear proliferation, prostitution, gay rights, capital punishment, child abuse, rape and chemical pollution. It also showcased breaking news stories about fires, earthquakes, and accidents. As well as examined ethics in journalism, such as plagiarism, corruption in journalism and conflicts of interest that journalists encounter.

Lou Grant remains the most authentic and comprehensive picture of the print media.

Capital News  was a short-lived American  drama series that aired on ABC in 1990, starring Lloyd Bridges and Helen Slater

The series focused on the editorial staff of the fictional The Washington Capital (inspired by the actual Washington Post).

It showed the editor and journalists taking on the politicians with their investigative stories, and blowing their covers. It also showed the editor fighting against marketing issues. A fast talking management head would often try to tell the editorial team which politician not to heckle.

In that sense, Capital News was true picture of the high end political newspaper.

Although Code Red on Colors is a human interest show, anchored by Sakshi Tanwar, its recurrent characters are a NGO representative and a reporter. Kabir, the crusading newspaper correspondent, exposes cases of human rights’ violations against women and children and helps them to a safe future.

Kabir comes across as an authentic committed and compassionate newspaper man (a breed fast disappearing, thanks to newspapers turning into products). His mission is to take to his readers stories of inhuman cruelty and haplessness.
Perhaps, Kabir is the stellar role in Code Red.